Malverne superintendent plans to retire at end of school year 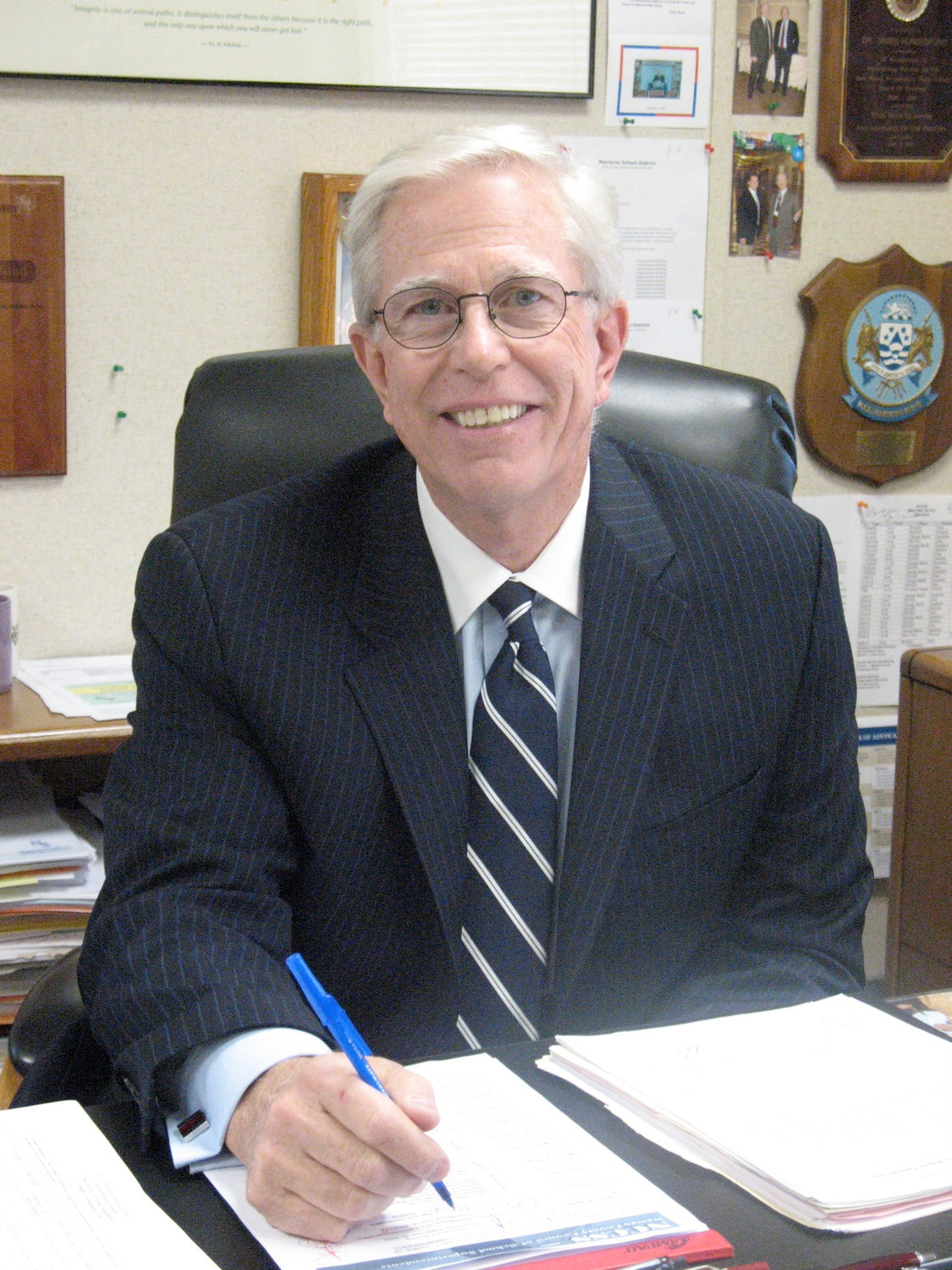 When Malverne School District Superintendent Dr. James Hunderfund arrived in 2007, he took the position in an interim role. Superintendent Mary Ellen Freeley had just retired, and Hunderfund filled in, he recalled, as a way to stay active — after serving as an educator in the Commack School District for over a decade and retiring in 2006. But when the district offered him a full-time position, he couldn’t refuse.
“Then, before I knew it the years came and went,” Hunderfund said, “but I’ve enjoyed every bit of it. There’s so much to love and appreciate about this school district, but now I’m ready to officially retire.”
After 13 years with the district, Hunderfund announced on Aug. 28 that he would retire at the end of the new school year, effective Aug. 31, 2020.
Hunderfund will leave Malverne with nearly 50 years of experience in education, 26 of them as a superintendent in Commack and Malverne. The district has received numerous accolades during his tenure. Malverne High School was named a New York State Rewards School for the first time in 2014-15. It made the National Achievement Honor Roll for Advanced Placement in 2012, 2015 and 2018, and was the only school in Nassau County to earn the National Policy Center’s Gold Award as a School of Opportunity in 2015. In addition, as part of the district’s first bond project in 2010, Hunderfund was responsible for the reorganization of the schools into a Princeton Plan, which included moving the fifth grade from the middle school and into the Davison Avenue Intermediate School.
“There was a distribution of kids that wasn’t even across the board, and the kids weren’t getting to know each other until they got up in the grades,” Hunderfund said. “Now they all get to know each other from the very start in kindergarten. We’re finding a much better unity because of that.”


Hunderfund’s leadership model is a collaborative one, making the entire Malverne community a partner in the educational system. As superintendent, he expanded services to the region through an extensive volunteer program involving students, parents and residents, and established a number of committees, bringing community groups and the schools together. Under his leadership, the community passed two bonds that helped bring district buildings up to 21st-century learning standards.
“Dr. Hunderfund’s leadership has been pivotal for the success of our school district,” said Malverne High Principal Dr. Vincent Romano. “He’s been here for 13 years and put together a leadership team that’s cohesive from kindergarten all the way up to 12th grade.”
Hunderfund said that he couldn’t take all of the credit, because Romano and Steven Gilhuley, assistant superintendent for curriculum, instruction and educational services, arrived before him. “When they were hired, they became the core of leadership in this district,” he said, and then we were able to add to that over time to get the right people in the right spots.”
The district has spent the past decade working to develop better relationships among staff and students. School officials began the initiative during the 2007-08 school year, when records show that there were more than 500 suspensions at the high school — which had an enrollment of 550 students. Hunderfund said that the school reduced the number of suspensions to three during the 2017-18 school year.
“Success is measured in many different ways. It’s not just academics,” he said. “It’s about students coming out of here with the ability and confidence to succeed in the next phase of their lives.”
“Dr. Hunderfund has made tremendous strides in our district by redefining our standards and traditions and bringing our schools, curriculum, students and community together to excel at levels that surpassed our expectations,” Board of Education President Danielle Hopkins stated in a news release. “We thank him for his service and dedication to our students and wish him nothing but health and happiness in his retirement. He will leave behind difficult shoes to fill as we seek someone to take our district to even greater heights.”
The school board said it intended to conduct an extensive search for a new superintendent. “We want everyone in the community to be heard, and we want to consider all options,” Hopkins said. “Our district has come so far, and we need to make sure that the person we hire will continue, if not advance, our mission.”
The board plans to discuss its next steps at a public meeting on Sept. 10. District residents are encouraged to attend. Any important announcements about the superintendent search will be posted on the district’s website, bit.ly/2NDK6f4.
Report an inappropriate comment