Class of 2017 valedictorian, salutatorian look back 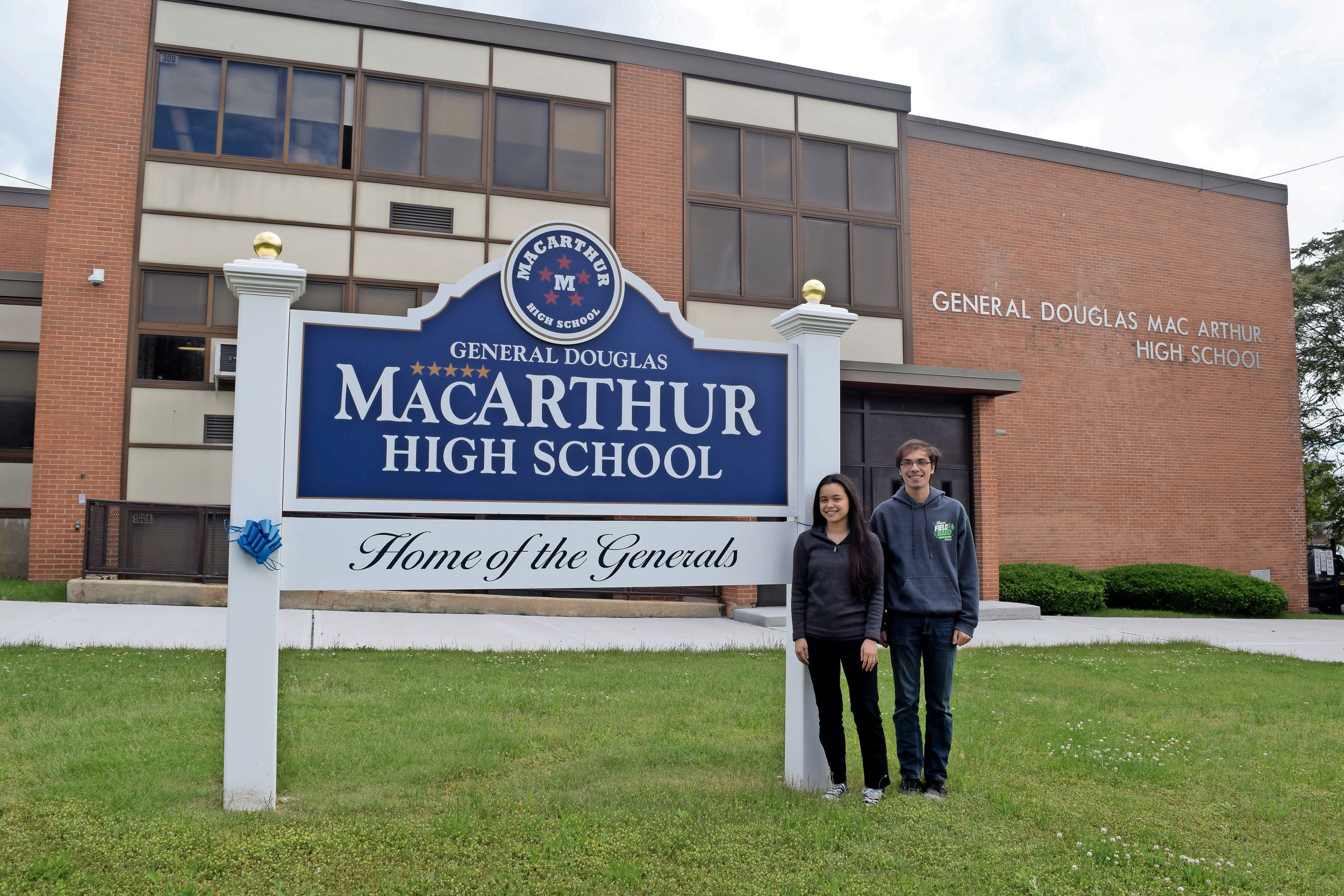 Casey Butcher and James May are the valedictorian and salutatorian of MacArthur High School’s class of 2017.
Rebecca Anderson/Herald
Top of the class

When MacArthur High School seniors Casey Butcher and James May were called to Principal Joseph Sheehan’s office in February, they had no idea why. They recalled waiting for Sheehan, slightly nervous and wondering what they might have done wrong.

But Sheehan gave them good news: Butcher and May were the valedictorian and salutatorian, respectively, of MacArthur’s class of 2017.

MacArthur, in Levittown, takes in students from northern parts of Wantagh and Seaford. Butcher and May are Levittown residents.

“It was honestly just a lot of hard work and elbow grease,” May said. “My teachers really helped a lot, too.”

May enrolled in Stony Brook University’s Honors College, and he plans to major in either biology or technology. Although he was accepted by other schools —including SUNY Binghamton, SUNY Geneseo and Fordham — he said he couldn’t pass up the full scholarship that Stony Brook offered him.

Shortly after the class of 2017 learned that May was the salutatorian, he said, his friends threw him a surprise party. “I didn’t really expect this,” he said. “Everyone here is just so smart and dedicated to their work. I was so excited when I found out the news.”

May said that taking nine Advanced Placement courses and getting involved in the Levittown music program helped him achieve success. He played saxophone and clarinet in the marching band for four years.

“Music has really taught me a good work ethic and given me balance with my schoolwork,” May said. “It’s nice to know that all of my hard work has finally paid off.”

The salutatorian said that he plans to join Stony Brook’s marching band as well. May noted that he also wants to look into studying abroad.

Like May, Butcher was also a student musician. She played trumpet and piano in the pit orchestra for the school musicals, as well as the French horn in the marching band.

Butcher said that finding out about her honor brought her to tears. When she was also accepted into her dream school — Stanford University — there was even more “ugly crying,” she added.

“I was beside myself for like two hours,” Butcher said with a laugh. “I’m going to miss everyone here, but I guess the West Coast is the best coast for now.”

She said she is excited about heading to California this fall. Although she applied to other universities — including MIT, St. John’s and UC Berkley — she said that she was happy she got into her “reach” school.

Butcher plans to double major in English and computer science or computational biology. She plans to join Stanford’s marching band, which she saw perform at an admitted-students weekend in April.

“The clubs really kept me going,” she said. “It’s so tempting to want to fall asleep or procrastinate, but when you have prior obligations, you can’t do that. I’ve also become friends with so many other kids who I don’t get to see in class.”

On top of her academic and extracurricular pursuits, Butcher earned a spot on the Levittown School District’s varsity swim team, and specialized in butterfly for three years.

“Swimming was a great way to blow off steam and stay in shape,” she said. “It keeps me from being lazy and gives me a sense of routine and structure in my life.”

Butcher and May gave speeches to their peers and administrators at their   graduation ceremony at Hofstra University last Saturday. They credited their teachers, saying they helped everyone in the class achieve their goals.

Sheehan said he was proud of both students. “My advice to both Casey and James is to continue with their work ethic, diligence, persistence and just their love for learning,” he said. “They currently possess all of the traits and qualities that are mandatory for success and I hope they continue on that path.”