Curt Gray has been creating sculptures since he was a child. After moving to East Meadow in 1998, he decided to take his hobby to another level.
Tim Baker/Herald photos 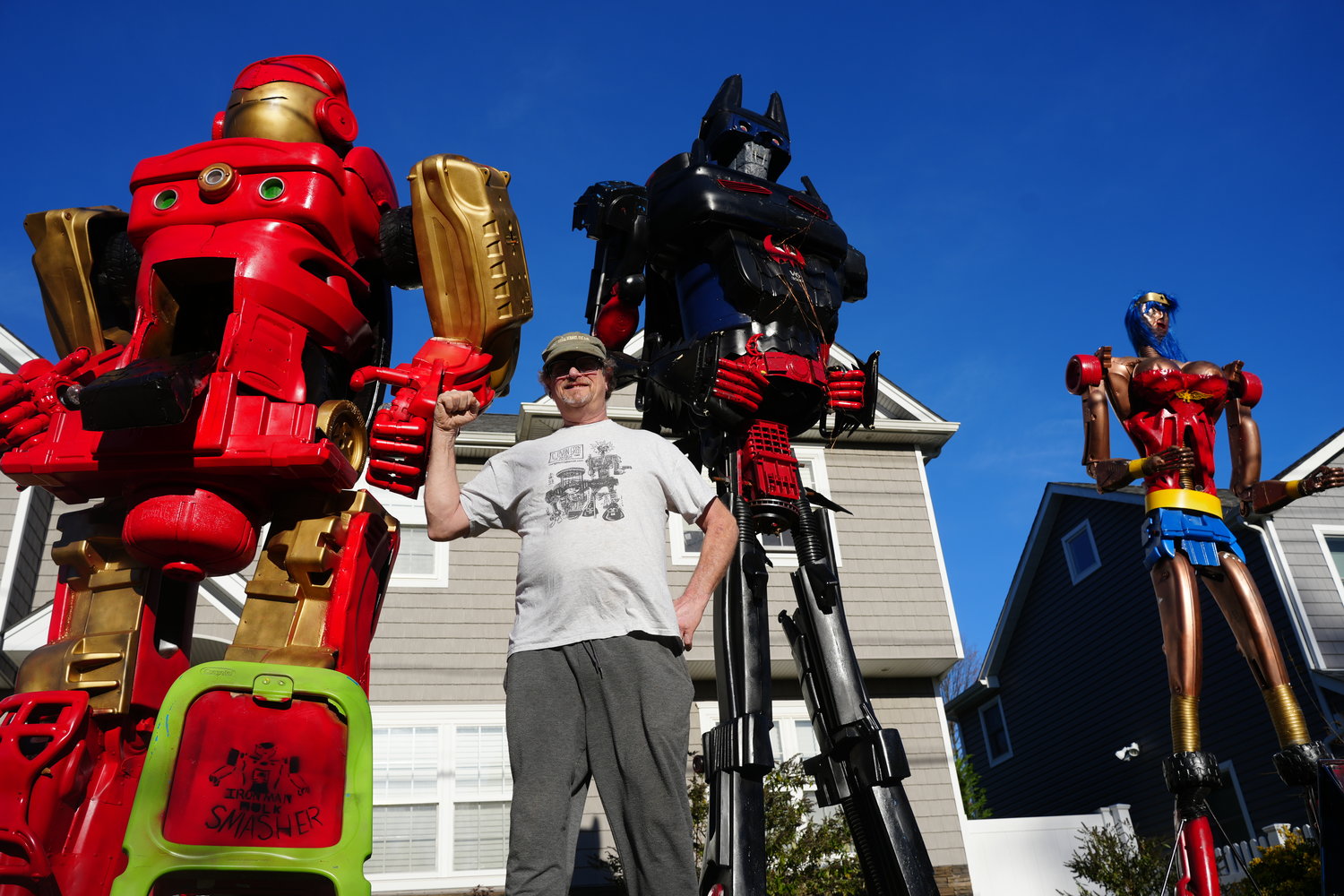 Raw materials for the sculptures are found all over the place. Usually Gray gets inspiration in his head before building anything. 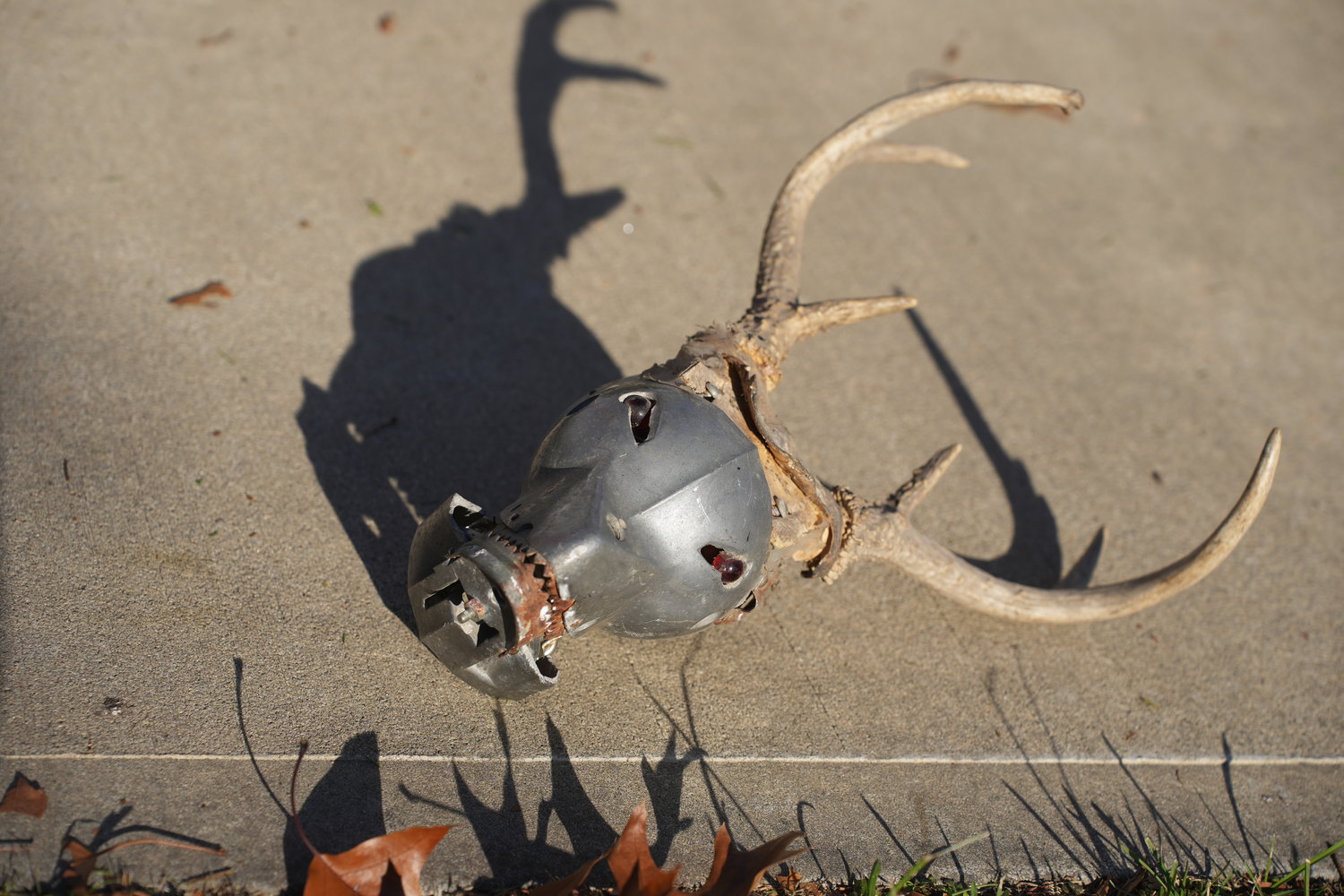 Curt Gray used to work with metal more often, like this metal head with real deer antlers, but eventually he switched to using plastic and stuff he found in junkyards.
Previous Next
By Mallory Wilson

With both dyslexia and ADHD, Curt Gray couldn’t focus on much as a child — except his art. Now, the 61-year-old’s childhood hobby has grown into something much bigger.

Gray has been obsessed with robots his entire life. He collected toy robots, and displayed them in his room at home in South Wantagh, where he grew up. Slowly but surely, he started building them, too.

“As a little kid, maybe like 4 years old, I’d run in the basement and I would take wood blocks and build robots and show my mom,” Gray said. “It’s been that way my whole life.

“She’d never let me make anything big. So I started out small, with six-foot pieces, and my whole room was set up like that.”

Now a contractor by trade, Gray builds his robots as tall as he wants and sets them up on his front lawn on Chestnut Avenue in East Meadow. He said he gets up to 20 people a day stopping by to take photos.

All of his creations are made out of recycled materials. Whether he’s scouring junkyards himself or having a little help from his friends, he always finds the part he wants to use. He has piles of stuff in his backyard, and a photographic memory is what helps him put his hand in a pile and find whatever he needs.

“People are constantly dropping parts off for me, or they’ll tell me where to find it and I’ll pick it up,” he explained. “They all want to have a piece of it because it makes it special. When I get a part from somebody I call it an “exspart” because it’s an extra special part.”

Currently, there are three pieces on his lawn that have been on display for about a year. Wonder Woman, Batman, and Iron Man all stand between 16 and 18 feet tall, and if you take the time to really look at each piece, you can start to recognize what he’s used for each part of the robot’s body. Iron Man’s shoulders are made of kiddie wagons, and his knees are from swing sets. Wonder Woman’s knees and shoulders are wheels from little kid electric ride-on cars.

“I create what I want to create. If I get an idea for something, I just build it,” he said. “Its robotic-like sculptures, but I started out doing plain robots, and other things too like dragons, lizards, giant monkeys — I build anything and everything.”

As soon as inspiration strikes, Gray said he starts sketching the piece he has in mind.

“Suddenly I get a flash in my head and I have to start sketching out a horrible sketch,” he joked. “I build the piece in my head and then I build it with the parts.”

Gray said he has a secret to keeping his robots standing — which he found through trial and error — and so far it’s worked pretty well. They’ve even survived hurricanes.

He started his giant robot endeavor in 1998 when he first moved to East Meadow. “When I first got my own house, I was like ‘let’s put one on the lawn,’” he said. “I started out with a couple of eight footers and people would stop by and say, ‘wow,’ so I said why not make them bigger.”

His first really big piece for his lawn didn’t have a name, he said, but it looked like a transformer. It was made up of a bunch of car parts, with a Volkswagen hood for the chest.

Creating art through these sculptures has been the one thing that has helped him stay focused. “It gave me a goal,” he said. “Growing up dyslexic and as an adult is rough. The English language is kind of like a foreign language to me.”

He explained that as a kid, he could never concentrate, and when he got out of control, his teachers would send him down to the art teacher. “I’d stay with the art teacher for like half a day,” he recalled. “I’d actually help him with his classes.

“A lot of the older kids wouldn’t like a younger kid like me helping them out, but I had a lot of skill.”

Gray said that he was one of the first people to be prescribed Ritalin, a drug used as part of a treatment program to control symptoms of ADHD and that the dosage was outrageous.

“From eighth to tenth grade I was not as efficient to create, I had no desire or creativity.”

He stopped taking the drug after the side effects started to catch up with him, and ever since he hasn’t stopped building things.

Being creative is in his blood and his dad aided in that. His dad was a miniatures specialist and made ships and planes and would show Gray his ways.

“I would watch my father at night. He had a big drawing table with all its parts on it with a little handsaw,” he said. “My father would make such incredible beautiful small things.”

It used to take Gray about a year to build one of his really big pieces, between thinking of an idea, finding the correct pieces, and building it. Each one is done by hand and is constructed with epoxies, nuts and bolts, glue, and minimal welding. He then spray paints them himself too. Some of them even light up at night from solar powered lights.

He started out using a lot of metal for his pieces but eventually gravitated towards the pieces he uses now from junkyards. He’s created thousands of pieces, whether they be full sculptures or just heads and legs. He used to have them all on display in his house — until his house went up in flames in 2015.

“I lost everything,” he said. “All of my collectibles and my first pieces. It got me really depressed.”

Now, he creates whenever he wants and sometimes he’ll make multiples of one part if he feels like he can’t get it right.

Over the years Gray has done a few shows where his work always gets a lot of attention. He’s been to the Bellmore Street Fair, showed his pieces at the East Meadow Library, and displayed his sculptures in Central Park. For the past 10 years, he’s brought his pieces to Eternal Con, Long Island’s version of Comic Con. But, he’s only sold a few pieces.

“This is my hobby, and maybe one day it’ll take off, but until that happens I take it day by day,” he said. “I don’t want to be a celebrity. I just like showing my art because I get pleasure out of it, especially if someone stops to take a picture with it.”

Gray doesn’t have a website, but anyone can see his pieces outside of his house. And if you catch him while he’s home, he’ll take a picture of you with his sculptures.