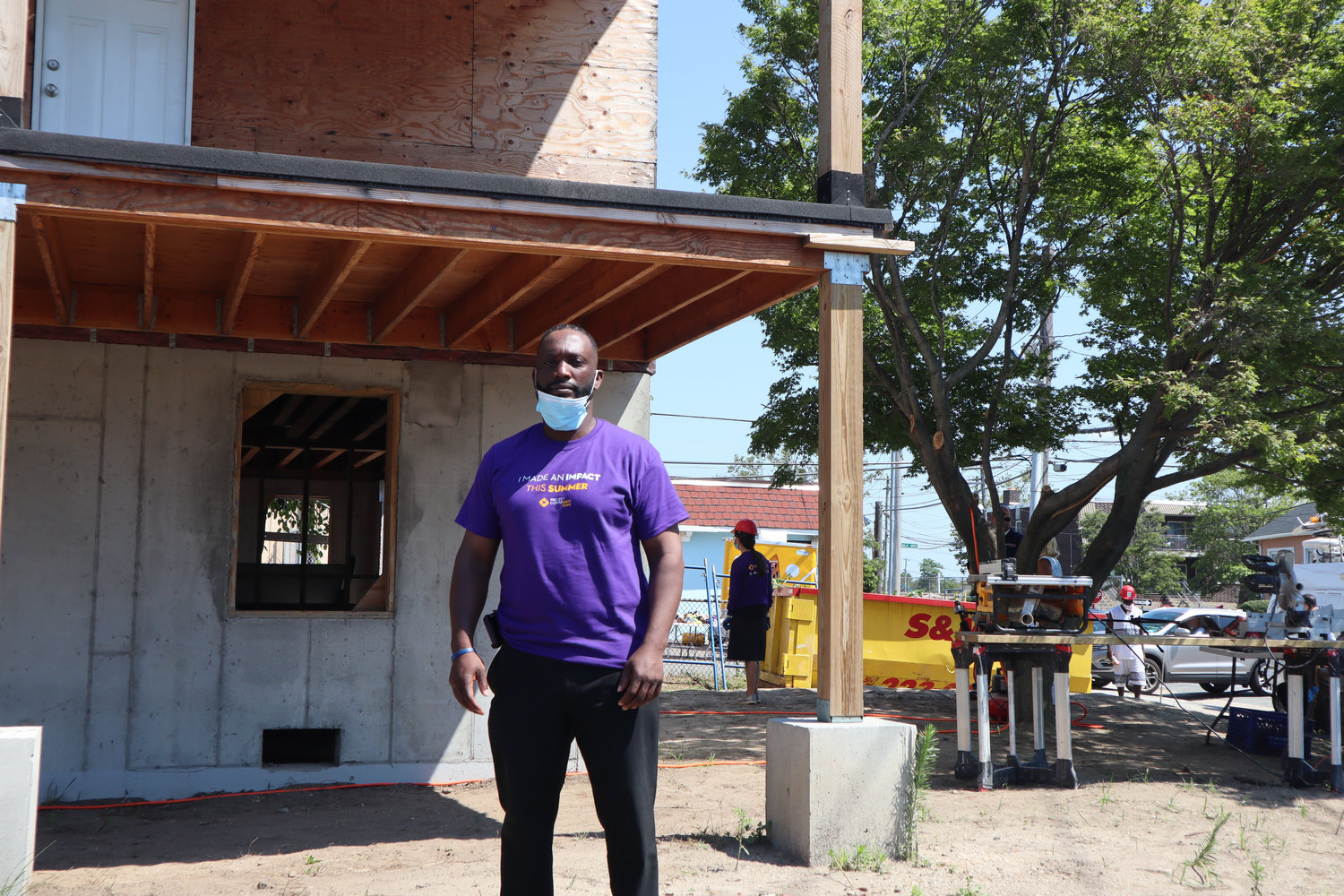 James Hodge in front of his home at Riverside Boulevard and East Fulton Street, which is being rebuilt with the help of local volunteers.
Darwin Yanes/Herald 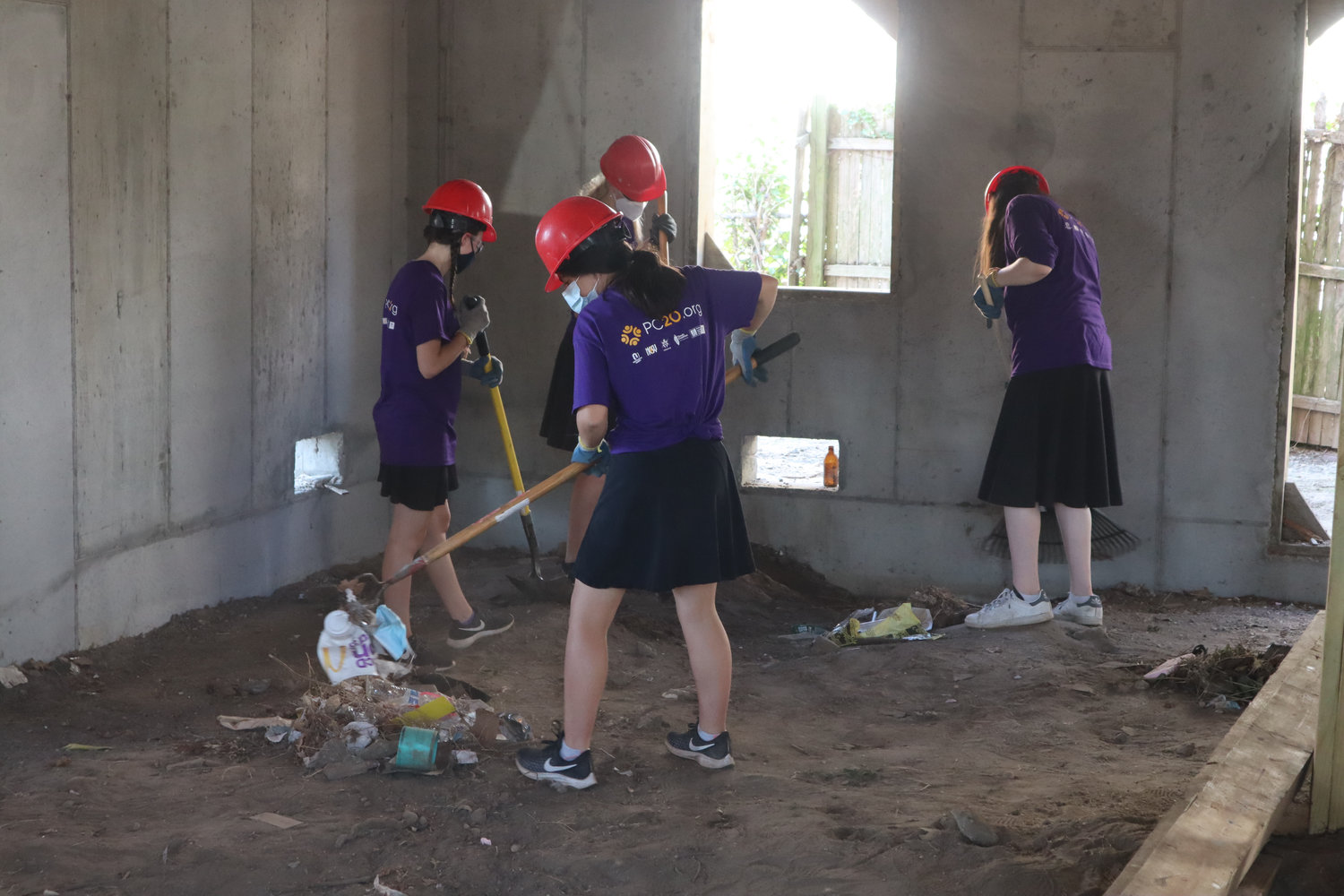 Local teenage girls were among the volunteers for the National Conference of Synagogue Youth.
Darwin Yanes/Herald 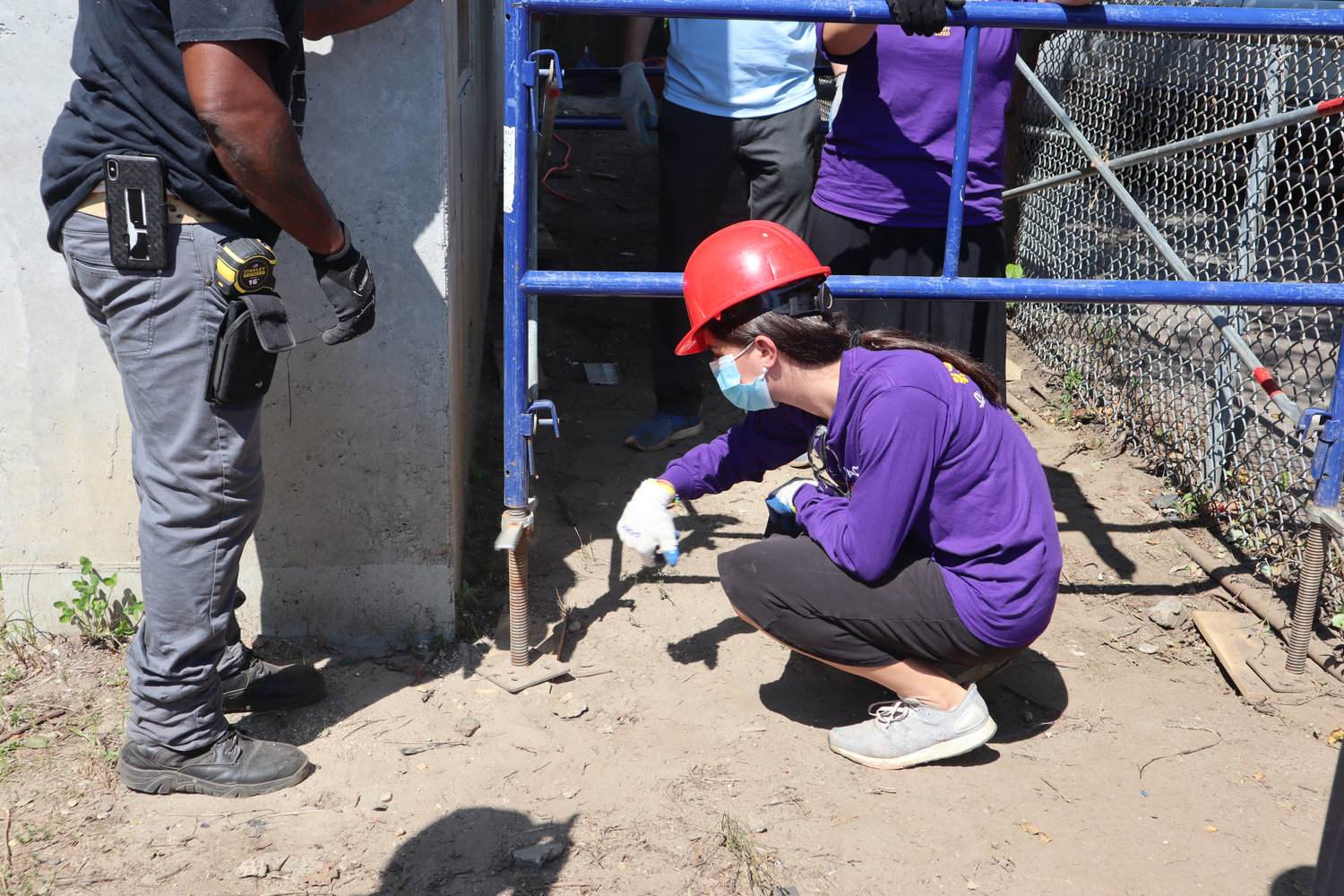 Riki Posner, 16, from Woodmere, was among the volunteers on Tuesday.
Darwin Yanes/Herald
Previous Next
By Darwin Yanes

Since Hurricane Sandy hit in 2012, James Hodge, the chairman of the Martin Luther King Center in Long Beach, has been without a permanent home. But that hasn’t diminished his drive to help others by leading service projects and bringing food, clothing and other supplies to many in the community.

Now, after helping local people survive the Sandy flooding, the coronavirus pandemic and smaller crises in between, Hodge is getting help rebuilding his home at the corner of Riverside Boulevard and East Fulton Street from Jewish teenagers taking part in the Orthodox Union’s Project Community 2020, as well as volunteers for Habitat for Humanity, a nonprofit dedicated to bringing affordable housing to those in need.

“It is truly amazing,” said Hodge, whose most recent project was helping to feed individuals and families with the center’s Grab and Go food program during the pandemic. “I am blessed to have them come and help me out with a house that has been in my family since I was born and since my mom and dad passed away. I know they’re smiling down now, so excited that the work is continuing and extra help has come.”

Hodge’s home, which is next door to the MLK Center, has not been habitable since Sandy. Hodge said he has been sleeping on family members’ couches, cots and inflatable mattresses ever since.

In the scorching heat on Tuesday, about a dozen Jewish teenage girls and volunteers from Habitat were re-building and cleaning up Hodge’s house. Anni Laufer, 16, of Lawrence, said she saw the opportunity on the Instagram page of the National Conference of Synagogue Youth, and she persuaded a group of friends to get involved. The pandemic, she said, freed up time for her to volunteer.

“I was going to go to camp, but once camp was canceled I really wanted a productive opportunity to do something that meant something this summer,” Laufer said. “I think it’s such a great experience. I really learned that there are people so close to us that could use our help, so it’s always important for neighbors to help neighbors.”

Laufer and her friends were at the site for four days, and were planning to return to do more work on the home as it neared completion.

Rabbi Ethan Katz, who directs national relief missions for NCSY, is overseeing the project and said that the organization has been in touch with Hodge for over a year about rebuilding his home. Most of the volunteers, Katz said, are ages 16 to 18, and they rotate in and out of the project in groups.

“The kids love to volunteer, to give back, and they feel they’re contributing to something greater,” Katz said. “This is really about teaching the teens fundamental Jewish values. These kids are the next leaders, and it’s about teaching them how to engage with the community and help improve the entire area.”

The volunteers cleaned walls, cleared debris and garbage and trimmed trees around Hodge’s house. Eventually, they will install siding and windows, and help with painting as well.

Myrnissa Stone-Sumair, executive director of Habitat for Humanity Nassau County, said the project was special to her because she was the executive director of the MLK Center for nine years, and worked alongside Hodge. “It’s always wonderful to go and build a house and meet a family and get them ready for homeownership,” Stone-Sumair said. “But it’s another thing when you can come and give back to a community that’s dear to your heart and be able to help someone who has helped so many people.”

Habitat currently has a construction supervisor and a special project coordinator helping Hodge rebuild. Stone-Sumair said that Habitat limited the number of its workers so that there could be more NCSY volunteers on hand. She also praised the teens’ work ethic.

“That kind of drive and help hits home to let us know that women can do just about anything, and we do it with passion,” Stone-Sumair said. “The women work very hard, they’re dedicated. They’re committed and serious and they work with pride.”

Habitat and the Youth volunteers are expected to be on the site another two to three weeks, before a general contractor steps in and takes over the project. Once it’s time to paint and hang sheetrock, Stone-Sumair said, they will assemble another team of volunteers to finish the construction.