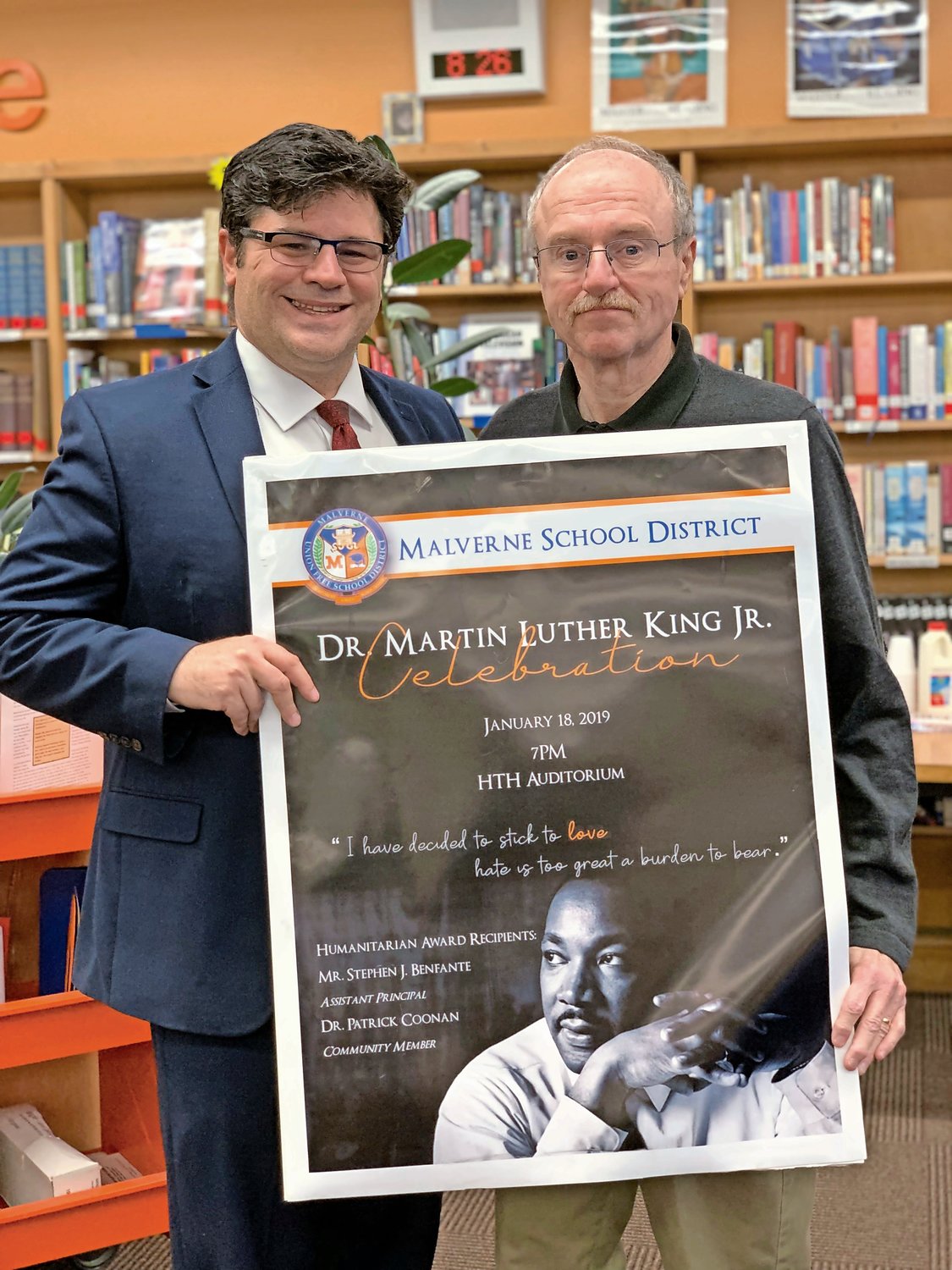 All students in the Malverne Union Free School District will take part in a special celebration in honor of Dr. Martin Luther King Jr. on Friday, Jan. 18, at 7 p.m., in the Howard T. Herber Middle School auditorium. The event will also recognize Davison Avenue Assistant Principal Stephen J. Benfante and community leader Dr. Patrick Coonan who will both be bestowed with the district’s annual Dr. Martin Luther King Jr. Humanitarian Award. Performances from students from each of the district’s four schools will also be a part of the celebration.
As an educator for 27 years, Benfante has impacted students’ lives of every age, from pre-kindergarten through the graduate level. He graduated Binghamton University with a degree in psychology and a concentration in biology and began his career as a researcher for Adelphi University’s School of Education. As he worked on his master’s degree in education, he studied the cultural integration of elementary students in the classroom and subsequently became the science teacher for the School of the Transfiguration in Corona, Queens. In the following years, he worked in Elmont and in 2004, Benfante became an assistant principal in the Malverne School District.
While at Malverne, he has had the opportunity to work with students on every grade level, from kindergarten through 12th grade. Continuing in his belief that an educator must cultivate the full value of a student’s experience, Benfante has successfully made innovative contributions to the multitude of district initiatives designed to enhance student achievement, develop strong character traits and promote family involvement. His work with the district’s Dr. Martin Luther King Jr. Celebration Committee is among the endeavors of which he’s most proud. Throughout his life, Benfante has been so moved by Dr. King’s vision that his dream has been an interwoven core of his own purpose and vision in life. Benfante acts on an inherent belief that the “treasures of our children brilliantly shine through the lenses of our hearts.”
Coonan graduated from Malverne High School in 1972 and earned his degree from Adelphi’s School of Nursing in 1978. Following graduation, Coonan spent the next decade moving around the Bronx and Manhattan as he held nursing positions in various capacities — as staff nurse, nurse manager, assistant director and director. In 2004, Coonan returned to his alma mater when he was named dean of Adelphi’s School of Nursing and was responsible for overseeing the administration and operations of the nursing program, as well as policy, program development, quality and student outcomes. Under his leadership, the School of Nursing became the College of Nursing and Public Health, and moved into a brand new building that includes state of the art nursing labs he designed from the ground up. He is a member of numerous organizations, including the American Organization of Nurse Executives and the American College of Healthcare Executives, and has received many accolades for his achievements.
Coonan was first elected to the Malverne Board of Education in 1997 and served one term. After taking a short hiatus, he ran again in 2007 and was elected to his second term, where he remained and served as board president through 2012. Among his many accomplishments, he helped oversee the passage of the $14 million bond that provided upgraded athletic facilities and expansions to the elementary schools. Connan has been a strong supporter of the music and marching band program for more than 20 years, and was pivotal in organizing other band parents to get involved. He and his wife, also a Malverne graduate, have been happily married for 41 years and have four children and one grandchild.


Benfante and Coonan will be honored during the ceremony, and the entire community is welcomed and encouraged to attend the event.