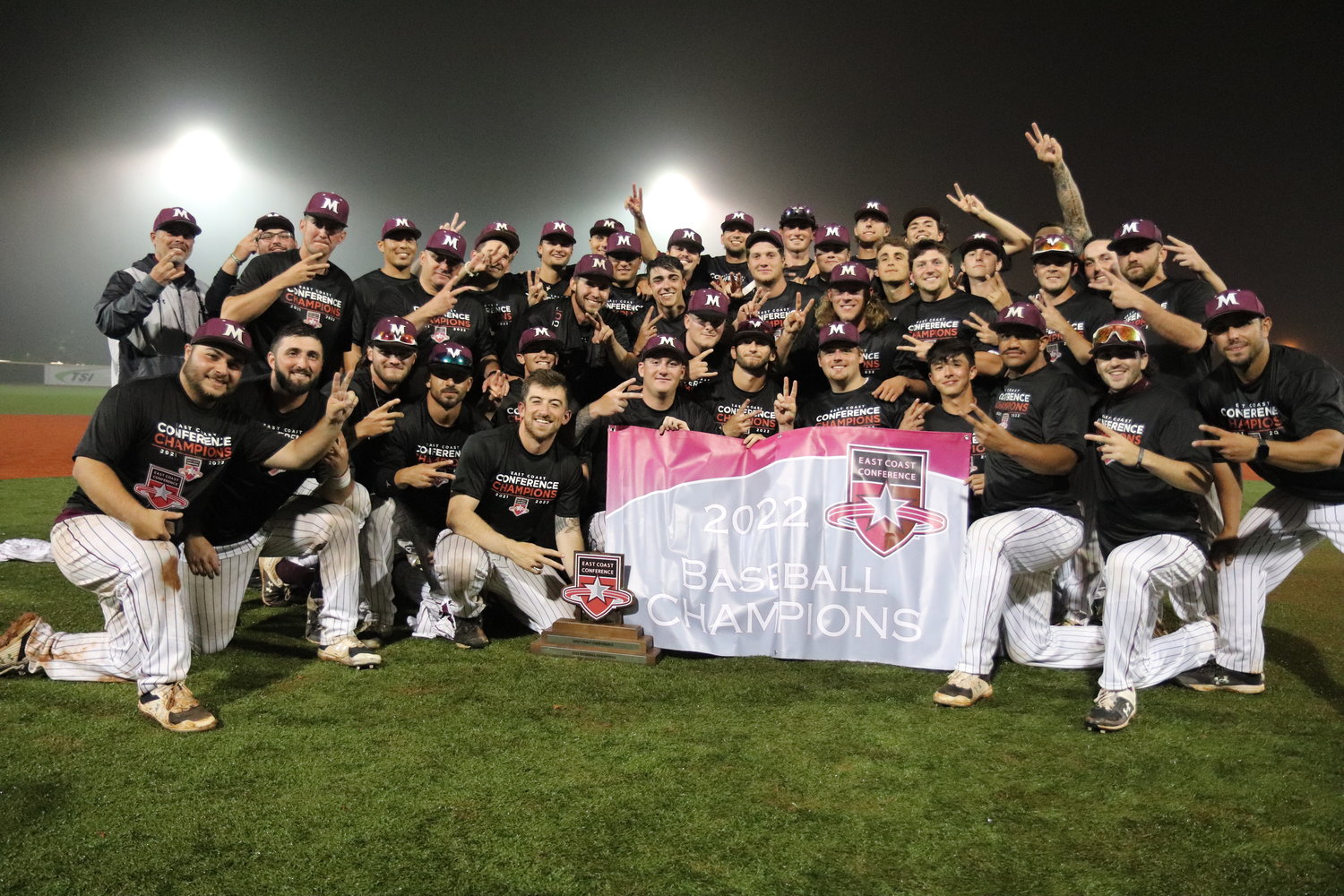 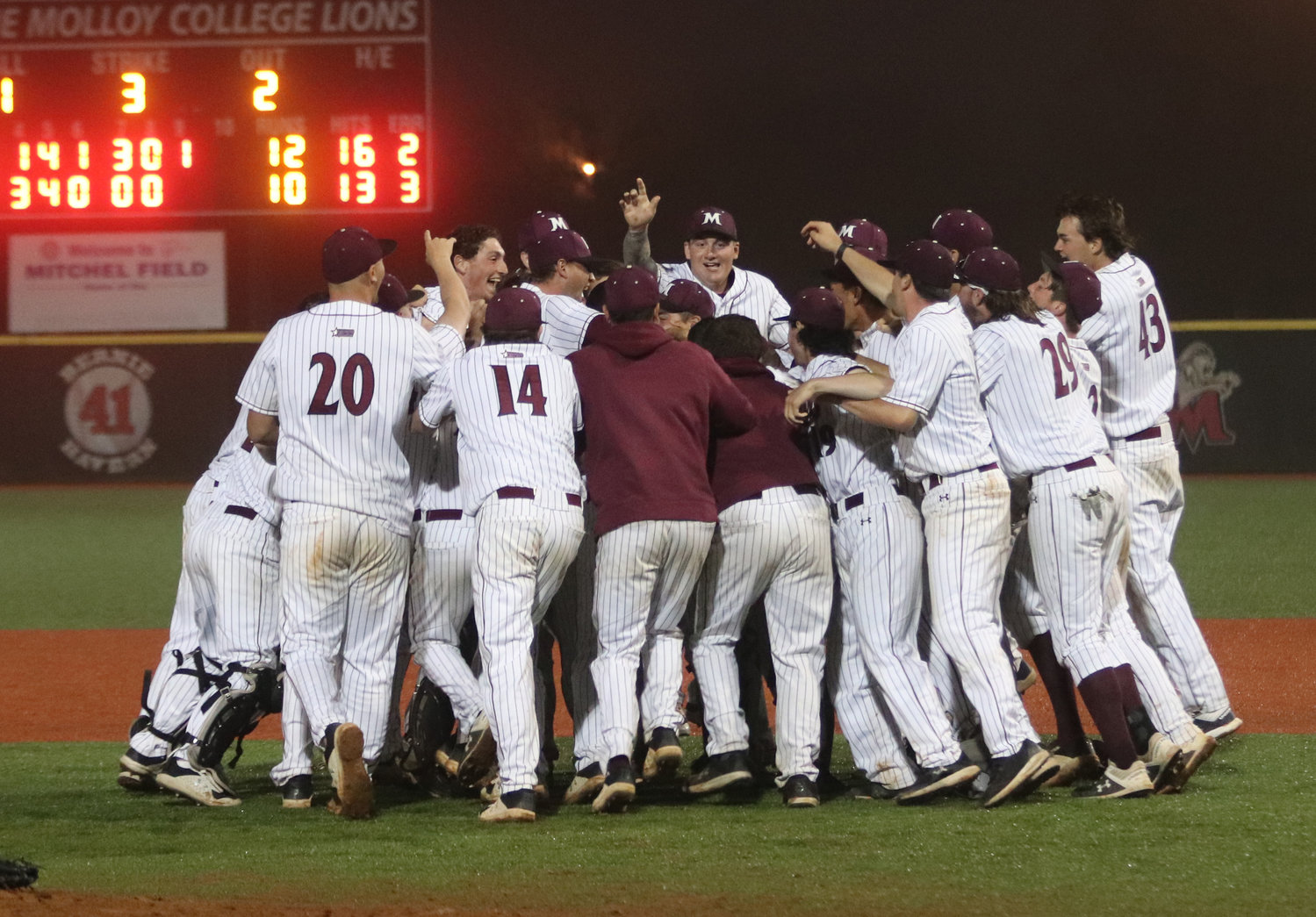 The Lions are 36-12 this season and earned a spot in the NCAA East Regional.
Courtesy Rob Keane/Molloy College Athletic
Previous Next
By Tony Bellissimo

The Lions, coached by Joe Fucarino, improved to 36-12 on the year. Graduate student Peter Theodorellis was named the tournament’s Most Outstanding Player.

“One of our goals was to repeat as conference champions and everyone is very happy,” Fucarino said. “We’ve got a mature group of guys with a lot of resilience.”

In a back-and-forth first game, Molloy trailed 3-0 after the top of the first but answered back in the bottom of the frame as sophomore Garrett Scavelli belted a three-run home run to knot the contest at three.

Lou Antos hit a solo home run for Queens in the third to push the Knights ahead, 4-3. Molloy responded in the fourth inning when Theodorellis singled home sophomore Chris Einemann to bring the game all square, 4-4.

The Knights waste no time retaking the lead in the fifth when Matt Filip singled to bring in the go-ahead run. Queens led, 5-4, and carried the advantage into the bottom of the eighth. That’s when Molloy senior Patrick Hoffman knotted the contest at five with an RBI single.

Queens was able to get the potential tying run on second base in the top of the ninth, but was unable to score as Molloy went on to secure the victory and force a winner-take-all game two for the ECC Championship.

Grad student Brian Morrisey pitched the last seven innings for the Lions and allowed just one run on four hits to earn the win.

Unlike the first game, the Lions took the lead in the finale, which featured a 75-minut rain delay, as redshirt senior Thomas Brady hit an RBI double and scored on junior David Franchi’s sac fly to make it 2-0 in the first.

After Queens scored three runs in the bottom of the third, Theodorellis grounded into a fielder’s choice, scoring Einemann to make it 3-3. The Lions fell behind 6-3 but exploded for four runs in the fifth to vault back in front, 7-6. Franchi, Hoffman, and Theodorellis had RBI singles, and Franchi came home on an error.

However, on a day when no lead was safe Queens answered with four runs in the bottom of the fifth to go up 10-7.

In the sixth, Scavelli blasted a solo home run to left to cut the advantage to 10-8. Molloy then scored three runs in the top of the seventh for an 11-10 lead. Theodorellis hit an RBI single, and later scored on an error, and Overton drilled an RBI double. Scavelli added an RBI double in the ninth for insurance.

Theodorellis threw four shutout innings and struck out seven to pick up his second win of the season.

“The second game was all hands on deck for both teams,” Fucarino said.

With the ECC crown, the Lions earned a berth in the NCAA East Regional and will host for the first time in program history. The four-team double-elimination event begins Thursday at Mitchel.