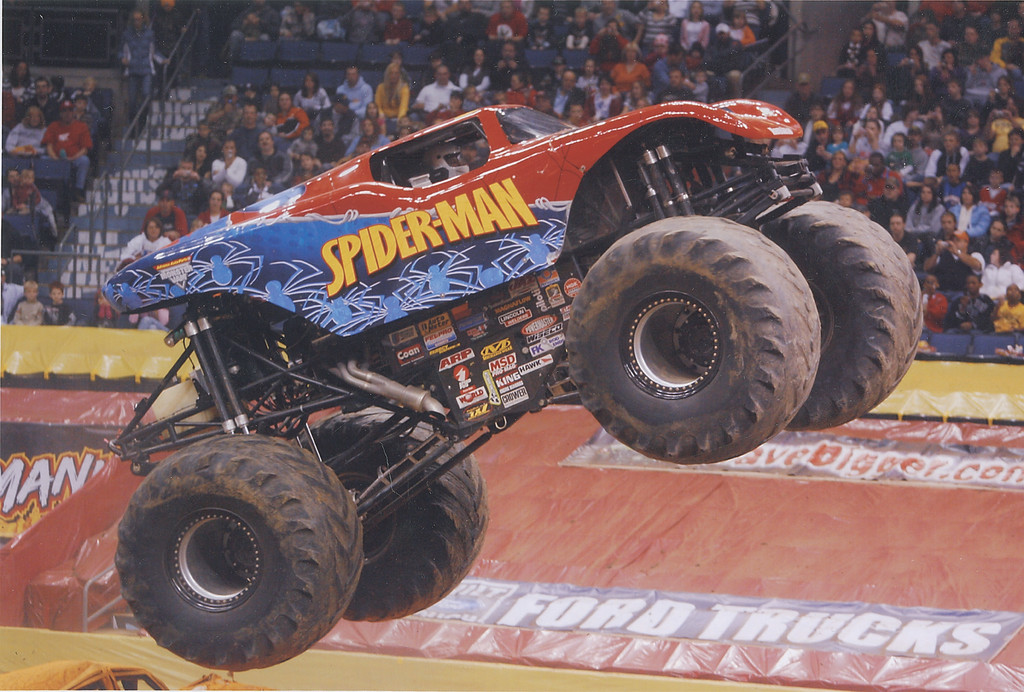 Spider-Man, another fan favorite, is ready for action at Nassau Coliseum. 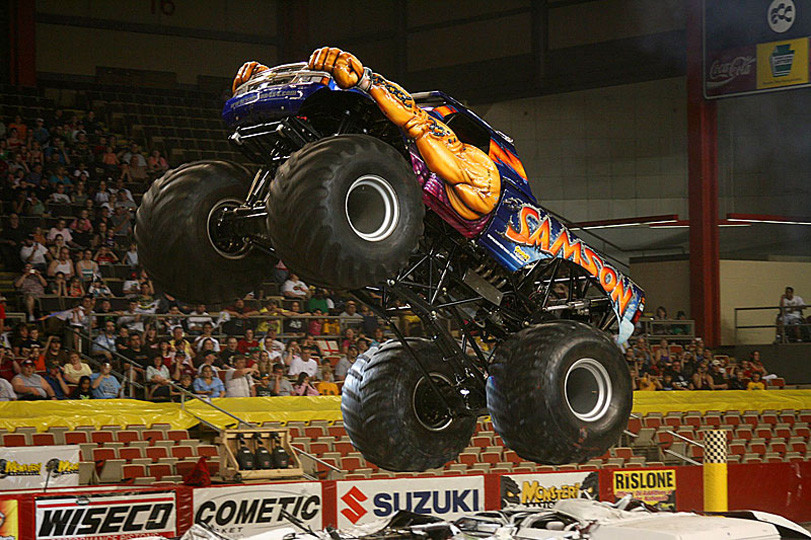 Monster Trucks reach new heights when Freestyle Mania returns to Long Island this weekend. Samson, and other popular trucks, will astonish fans with exciting car-crunching feats as they fly more than 30 feet in the air.
Dan Patrick
Previous Next
Karen Bloom

Monster truck madness rolls into the area when these 10,000 pound metal monstrosities make their way to Nassau Coliseum this weekend, for three days of action-packed competition. Monster truck fans can watch their favorite trucks compete in a new, revved up version of Monster Jam, Jan. 28-30, including the legendary Grave Digger®, Spider-Man®, Aftershock, Crazy Train, and Samson, among other car-crunching monstrosities.
The revved-up spectacle features the monster trucks and street bikes, in which the drivers will dazzle fans with risky and challenging maneuvers.
“It’s a phenomenal show,” said driver Dan Patrick, whose truck, the legendary Samson, is one of the stars of the event. “It’s even better than last year’s version (which was the first time the show was presented in the freestyle format). “Now that we have one year under our belt, we are more seasoned with each other. We know what each other’s trucks can do and we have raised the intensity level.”
Unlike other monster truck events which combine head to head racing with the freestyle tricks, this latest version focuses on the daredevil freestyle action, the favorite part of the show for most fans.


“The freestyle is amazing,” said Patrick. “It allows drivers to be more creative than just racing side by side.”
When Patrick and his competitors make their way here for ”Monster Jan Freestyle Mania,” they aim to enthrall fans with two hours of non-stop action unlike other monster truck shows. Drivers will attempt to best each other as they astonish the audience with their skills while they move through show’s five elements. In this edge-of-your-seat event that blows the roof off traditional motor sports racing, the drivers push these 1,500 HP monster trucks (and motorbikes) to the limit – and beyond. The high-energy atmosphere is designed to appeal to families with a variety of specialty acts. Audiences witness an intense spectacle of demolition, sound and speed surrounding the world’s best monster trucks and the drivers who employ the latest technology to provide a thrilling display of motorsport action.
“The freestyle is the best part of any monster truck competition,” said Patrick, who explained that when he first became aware of the show’s concept, he knew he wanted to get in on the event. “I asked to be a part of this, as soon as I heard about it.”
Drivers put their trucks and bikes to the test as they try to outdo one another during each element throughout the two hour extravaganza.

Freestyle Mania Wheelie Competition
Unlike the traditional power wheelie, where the driver uses the engine’s power to transfer up onto the back wheels, in this wheelie competition the driver will be tested by how he manipulates the unyielding obstacle course in an attempt to pull off the perfect Freestyle wheelie.

Maniac Challenge
Drivers will be time-challenged as they skillfully navigate their way through an obstacle course that includes cars, trucks and more barriers positioned on the track in an attempt to slow down the 10,000-pound trucks.

Jam Session
A ‘Jam Session’ is integrated into the program that involves some of the more thrill-seeking vehicles in the show. In this segment, Quad-FMXers, Freestyle Superbikers, Freestyle Motocrossers, and Freestyle BMXers perform simultaneously at one time on the course.

Donut Competition
Performing a donut while driving has been around for a long time, but through the defiance of monster truck drivers, a regular donut was just not enough. Enter the cyclone, a move where the driver creates enough speed while performing a regular donut that the truck’s rear tires gyrate so rapidly that the truck appears to be nailed to the floor.

Freestyle Competition
And of course, no Monster Jam event would be complete without the segmentknown as Monster Jam Freestyle. According to the promoters, this part of the show, is “bigger, better and badder than ever before.” There are no rules and no restrictions as the trucks ‘pogo-stick’ their way around the course in an effort to deliver the most outrageous run possible.
“The show allows you to be more creative than traditional [monster truck] racing,” said Patrick. “And everyone responds enthusiastically, especially the fans.” So enthusiastically, in fact, that Patrick saidthat he and his fellow drivers will spend two hours following every show signing autographs for fans. “We spend more time with the fans after the show, than we do performing.”
While the entire show keeps everyone on the edge of their seats, Patrick said he is particularly amazed by the stunts performed by the various bikes that participate in the event. “It’s amazing what these kids can do on the bikes, especially the 360 backflips,” he said. “I take every opportunity I can to watch these kids on their bikes. I wish we could do some of those stunts with our trucks.”
Patrick encourages Monster Jam enthusiasts to come to the Pit Party pre-show, held on Friday, 5:30-6:30 p.m., and Saturday, 11 a.m.-1 p.m. The Pit Party gives fans a chance to get a view of the trucks up-close and meet the drivers of the behemoth monster trucks.
“It’s a great chance to get a one-on-one experience,” Patrick said. “We enjoy meeting our fans and showing our trucks.”