'Nap' time for an actor on the move 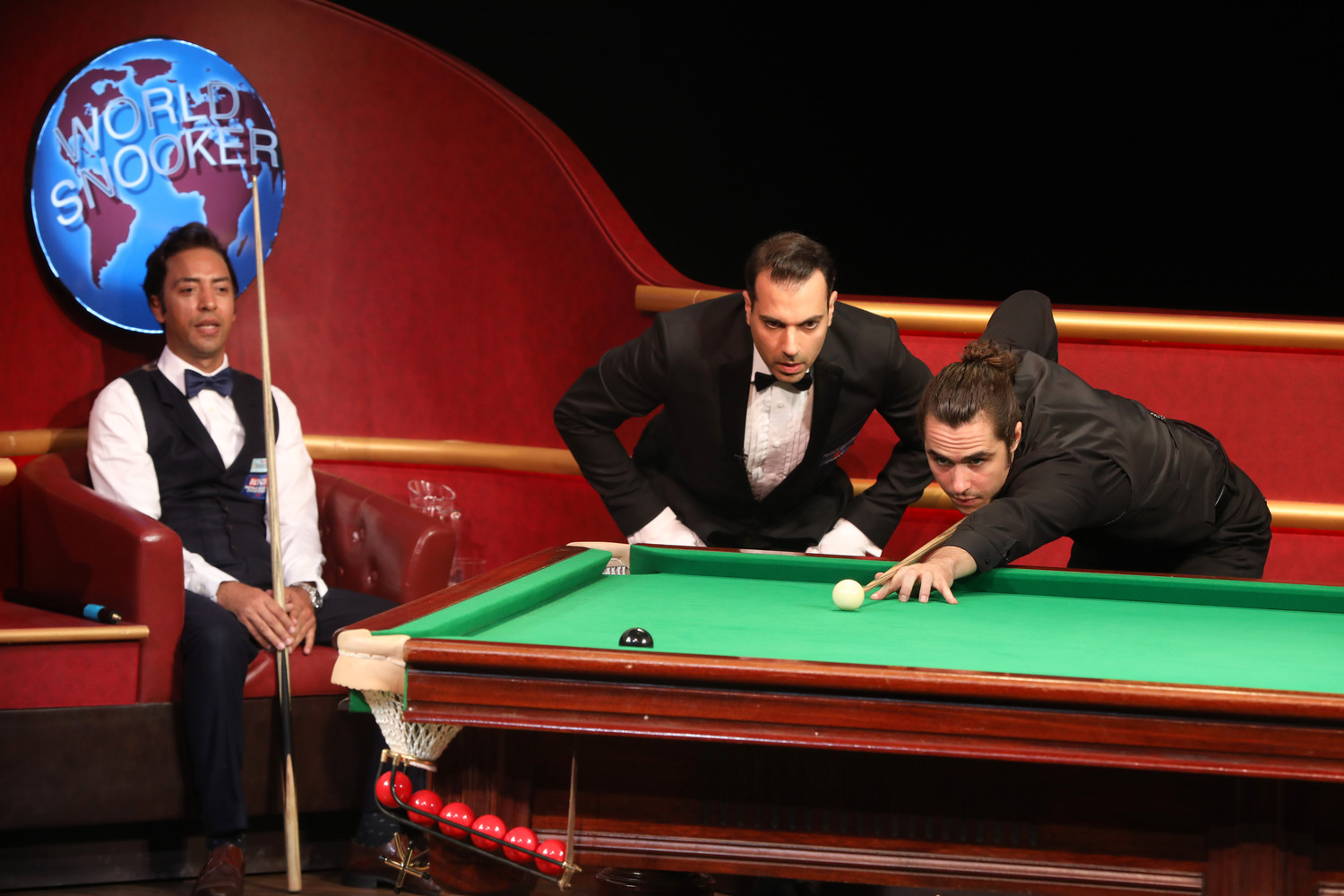 Ethan Hova in a scene from Manhattan Theater Club’s “The Nap.” A snooker tournament unfolds live on stage in this fast-paced comedy thriller.
Courtesy Joan Marcus

If you took in theater on the South Shore in the ‘90s, there is an excellent chance that you caught future Broadway thespian Ethan Hova honing his craft. He is currently making his Broadway debut in “The Nap,” a new play by Richard Bean (“One Man” “Two Guvnors”), that takes a funny look at the world of snooker, the British version of pool. On a break from playing multiple roles in the play, including that of snooker championship referee, he spoke with the Herald about his Long Island roots and how his upbringing helped prepare him for a career in the arts.
“I remember seeing a production of “Jesus Christ Superstar” at a college on Long Island, and I didn’t want to go,” he says of the moment that transformed his appreciation for the arts. “I was in middle school, I had never seen a musical before, and I was negative about everything. From the moment the first electric chord riff started, I was riveted! I didn’t know that kind of theater existed with rock and electric guitar. It blew my mind. I wish that every young person could have an experience like that in the theater , where their expectations of what is possible are upended.”
Hova began to demonstrate his budding acting chops at Cultural Arts Playhouse in Old Bethpage (which has since relocated to Syosset), where he worked on shows such as “Oklahoma,” “Grease” and “Oliver.” He also fondly remembers Merrick’s The Stage Theatre (now known as Merrick Theatre & Center for the Arts) as being influential in his career as a performer.
“I did “Our Town” where I played George, and Aimée DeShayes, my high school girlfriend, played Emily. We got to carpool!” he laughs, especially when considering that a production photo from the show remains in the theater lobby to this day.
“Then we did a production of “Call Me Madam,” which oddly enough starred my pediatrician! I don’t know what she’s doing now, but she was kind of a staple of the musical theater scene when I was growing up. It was so much fun to perform with her as an almost-adult.”


Performing on Long Island helped Hova to find a sense of community. “It was where I belonged,” he says of being on stage, including at Hofstra University, where he took on the role of Fyedka in “Fiddler on the Roof” with the Gray Wig Players.
“I didn’t have a lot of friends in middle school, and I think doing theater outside of school gave me the confidence to have friends in high school. It set me on the right path.” He also credits being a part of the Syosset High School Forensics Club as being essential to refining his talent, not to mention that the national competitions introduced him to forensics superstar, future scene-stealer, and fellow Carnegie Mellon graduate Josh Gad. “When I got to college I was so excited to see him. He’s a superhuman!”
Hova moved to Los Angeles after graduating from CMU, soon after landing a role on NBC’s “The Blacklist.” However, New York had become ingrained in his heart. Upon returning he worked with Ensemble Studio Theatre (among others) before cofounding Exit, Pursued by a Bear, with friends. “Working with its artistic director, Ed Sylvanus Iskandar, really taught me what I wanted out of the industry. [The company] was instrumental in finding my core as an artist and what really moves me.”
Last year Hova wrapped a run as an understudy with the national tour of “The Humans,” Stephen Karam’s Tony Award-winning play; an experience that he says readied him for his current gig on Broadway. “With “The Humans” there was a lot of preparing and then waiting,” he says of the intricacies of being an understudy. “For “The Nap” I have a role in the show every night, but I’m also understudying two other roles. ‘The Humans’ helped me tremendously because I knew that I could do it.”
In “The Nap” Hova plays a few minor roles, but he stands out in every one of his scenes. Most surprising to him was the enjoyment he found in getting ready to play the referee.
“I had a real affinity for snooker as a spectator,” he says. “I find sports pretty boring to watch, but I obviously had to watch a lot of snooker to learn how to referee the games on stage. Watching matches on YouTube led me to do a lot of soul-searching.”
Because the actors play a live game at every performance, Hova must be prepared for anything to happen. In fact, there might be a different winner in each game, causing a slight variation in each performance’s last few moments. That sits well with Hova, as he enjoys the curiosities that every facet of his career brings.
“The whole process with “The Nap” has been surprising from my involvement in it to interacting with the cast every day and seeing how warm and generous they are. The show has been a complete joy.”
Visit thenapbroadway.com for more information.