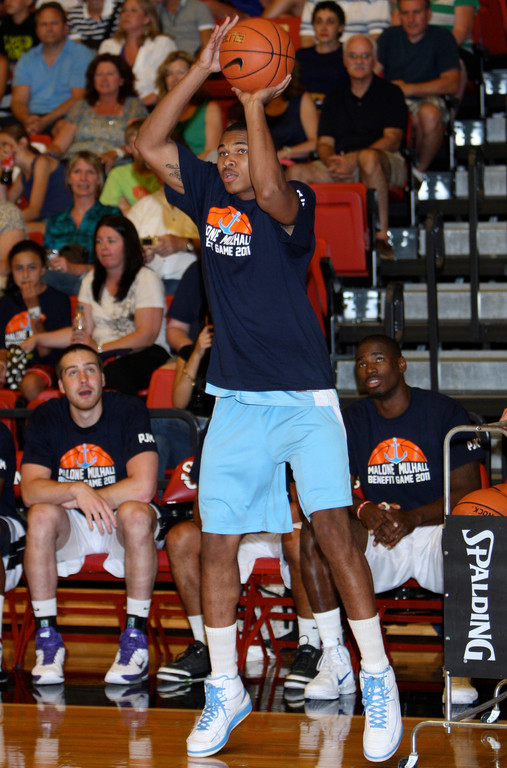 Recent Notre Dame graduate Tyrone Nash knows a little bit about playing basketball at Carnesecca Arena on the campus of St. John’s University. The 6-foot-8 forward scored a career high 16 points in a Big East contest against the Red Storm during his junior year.

While Nash spent the past four years mixing it up with the likes of Louisville, Connecticut, Georgetown, Syracuse and other Big East powers, last Saturday’s visit to St. John’s may have been the most meaningful game he has played on a college floor. Nash participated in the inaugural Malone Mulhall Benefit Basketball Game which was played at Carnesecca Arena.

Nash was excited to take part in the special event. “Joe Lynch and everyone else involved in putting this together really did a great job,” Nash said. “It’s an honor to be asked to play in a game in memory of Jamie, Paige and Mike. I’m just glad to be part of supporting such a great cause.”

Before arriving at South Bend, Nash was a two-time Private Schools Athletic Association Player of the Year, a first team All-State honoree, and a straight-A student at Lawrence Woodmere Academy.

After a solid senior season for the Fightin’ Irish, the versatile forward is headed to the pro ranks. Nash recently signed a one-year contract with the Tubingen Walter-Tigers of Germany. He joins Notre Dame teammate Ben Hansbrough, the Big East Player of the Year, Pittsburgh forward Gilbert Brown, and St. John’s guard Paris Horne, who will all be playing in Germany.

Nash, who averaged 9.5 points per game, 5.9 rebounds and 2.6 assists as a senior, is looking forward to going overseas. “I’m very excited about getting my professional career started,” Nash said. “It’s going to be a great experience playing against high-level competition. I can’t wait to get started.”