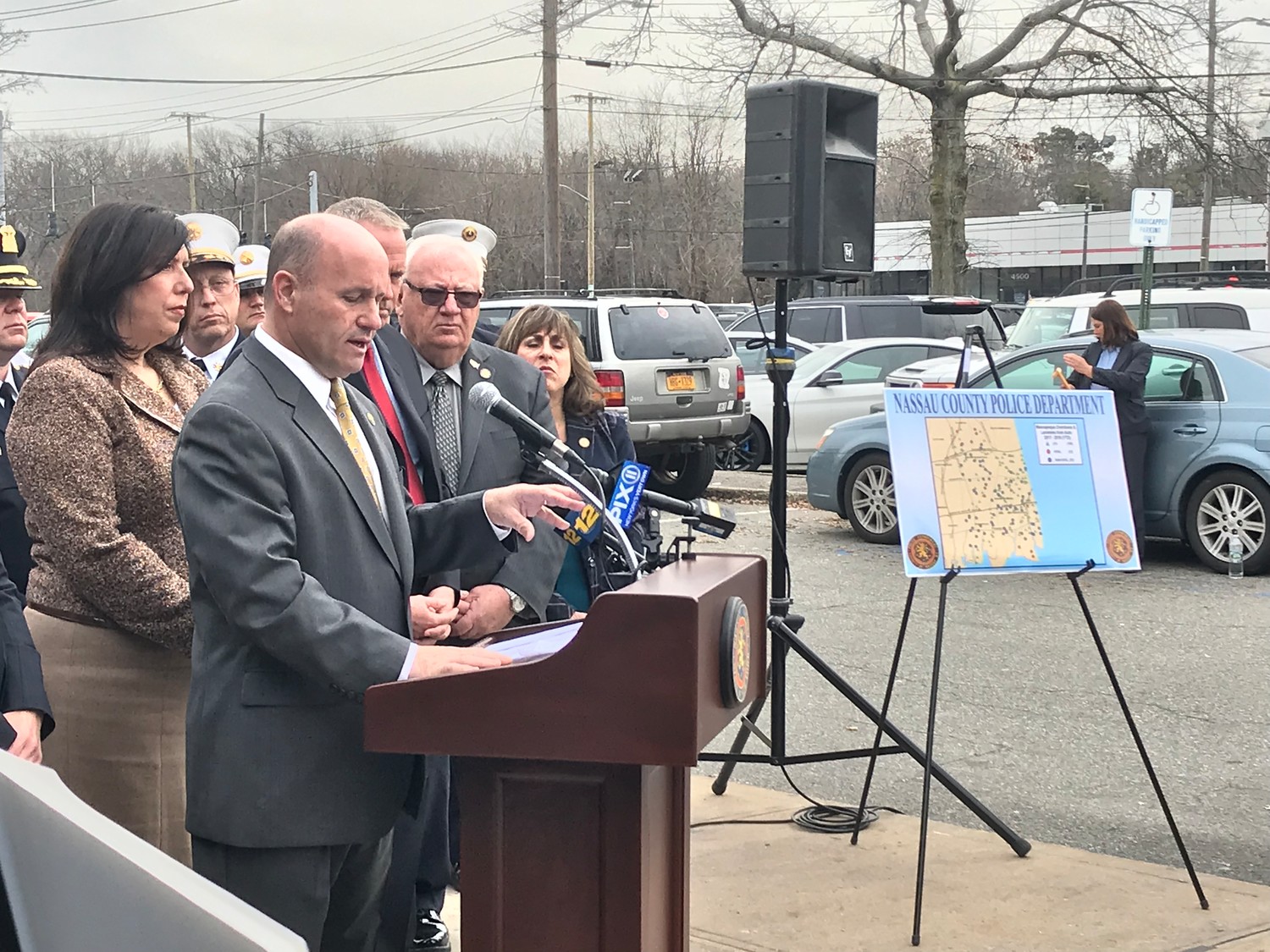 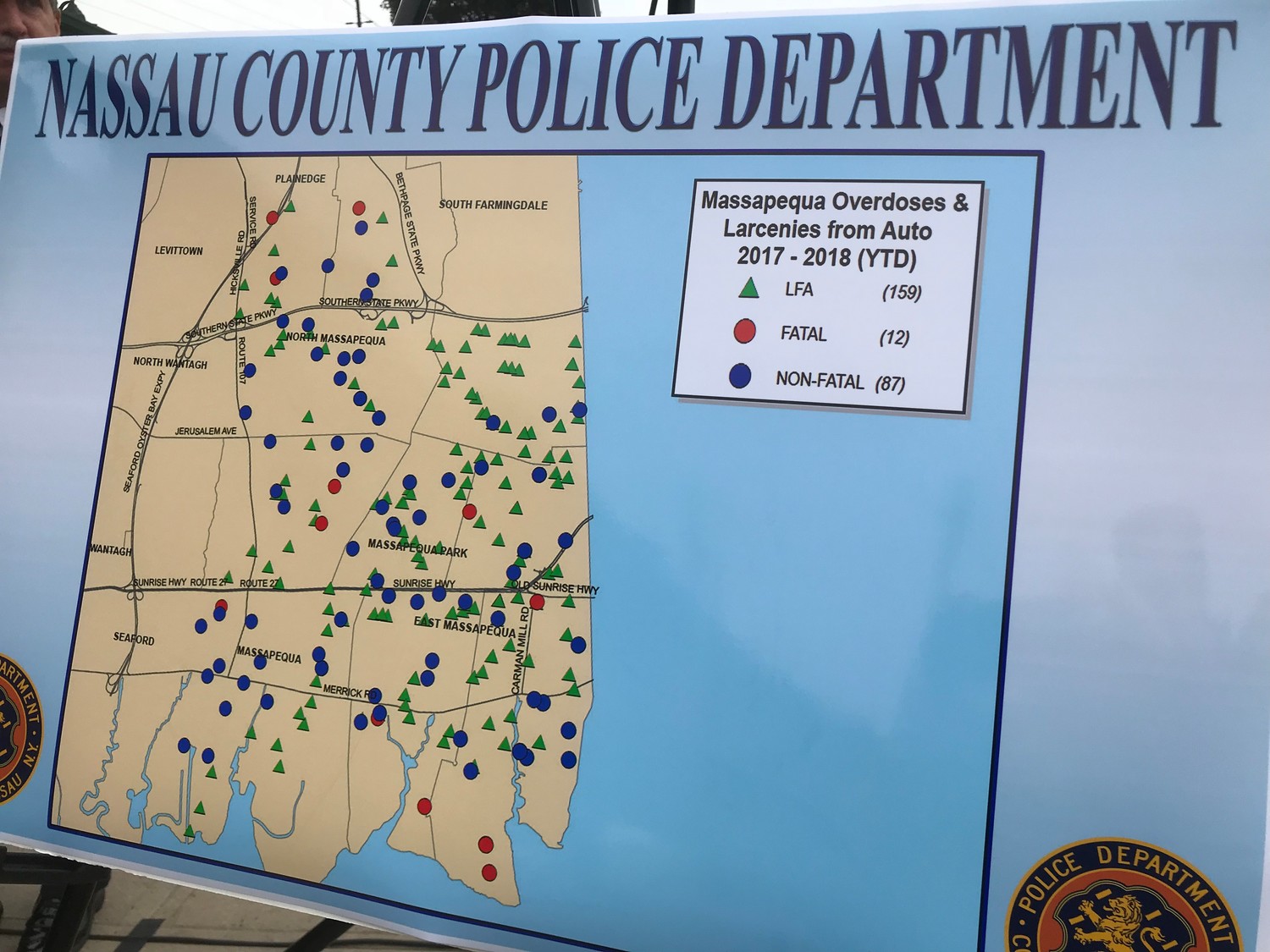 This map of Massapequa shows the information that OD Maps is giving the NCPD. The NCPD layer crimes on top of overdoses, and use to find correlations between crime and overdoses along with areas with a large number of overdose incidents.
James Mattone/Herald
Previous Next
By James Mattone

Ryder also said that the NCPD arrested 59 people in the area on opioid-related charges in the last week or so, including four potential dealers.

“We’re going to take [the county] back, street by street, neighborhood by neighborhood,” Ryder said, at a news conference at the Massapequa LIRR station.

Ryder, who was sworn in as NCPD Commissioner two days prior, reiterated OD Maps’ main function: to attack the county’s opioid crisis by identifying areas of high overdose and crime levels through real-time mapping and layering of different crimes and overdoses.

The number one crime related to overdoses, Ryder said, is theft from cars. In Massapequa alone, there were 159 larcenies from autos between January 2017 and February 2018, and the majority of the hamlet’s 87 non-fatal and 12 fatal overdoses occurred near those crimes, he said.

“This is the first hot spot – the hottest spot – right now in the county, that we are going after,” Ryder explained.

Ryder added that police have seen more low-level crimes, such as carjacking and shoplifting, correlate with overdoses, rather than more violent crimes.

“We are very fortunate that the overdoses have not reached a violent level,” Ryder said, “as it was when you go back to the days of crack.”

At 6 a.m. on March 1, Ryder, NCPD officers and youths in the department’s Explorers program handed out fliers to commuters, featuring information on signs to look for in a family or friend who may be suffering from opioid addiction, as well as advice for staying aware and alert when leaving valuables in cars or shopping around the community.

The Herald previously reported that there were over 800 overdoses countywide from January 2017 to Feb. 1, 2018 – 200 of which were fatal. In Massapequa, as well as its surrounding communities of Levittown, East Meadow, Wantagh, Seaford and North Bellmore, 215 non-fatal and well as 30 fatal overdoses occurred in that same time period.

“We can’t arrest our way out of this problem,” Ryder said, and the county has taken a four-pronged approach to the issue: Education, awareness, enforcement and treatment. Treatment is the most important, Ryder said.

Nevertheless, OD Maps intel led to the arrest of four suspected dealers in the Massapequa area, including 21-year-old Bellmore resident Danielle Kreuder, who was accused of selling heroin.

Nassau County District Attorney Madeline Singas commended Nassau County Executive Laura Curran, the NCPD and those who are combating the countywide opioid crisis for their efforts, but said we are still in the throes of this epidemic.

“You have to be under a rock to not now that people in our county are suffering,” Singas said. “We are losing lives every single day.”

Singas also reaffirmed the County’s mission to not tolerate drug dealers entering the county and “pushing this poison into our families and our children.”

Ryder ended the conference by hinting at a highly concentrated overdose area in the county that will be revealed within about a week of March 1.