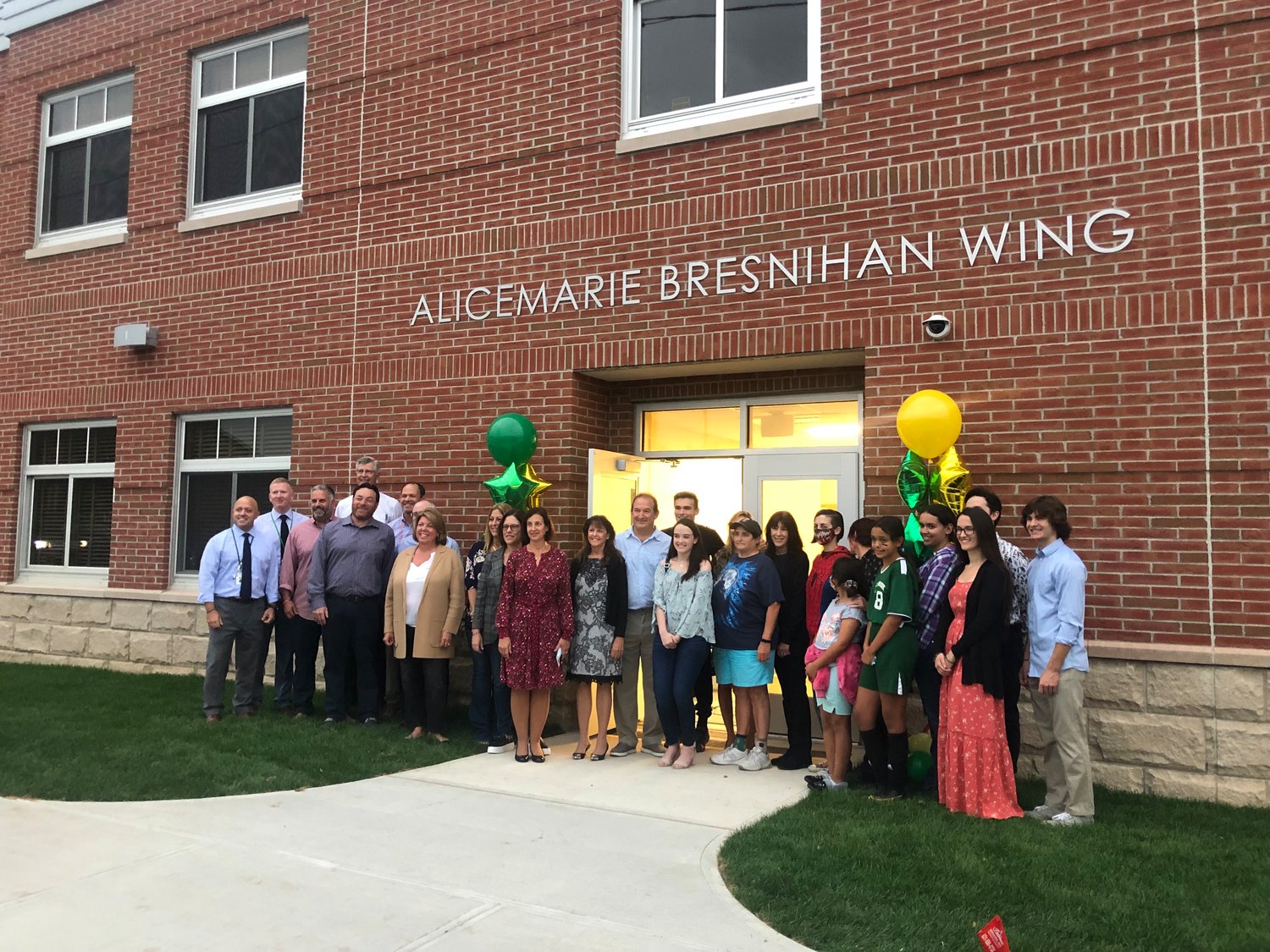 The late Alicemarie Bresnihan was a mother figure to many: her nine children, her 21 grandchildren, the members of the Board of Education and many students in the Lynbrook Public Schools. Now, she is being honored for her years of service to the community — her four and a half decades of commitment — which made her one of the longest-serving Lynbrook school board members and one of the longest-tenured trustees in New York state.

“Alice made all of us better educators and board members,” Superintendent Dr. Melissa Burak said. “I don’t think we’ll ever have someone like her again.”

In her honor, Lynbrook High School’s new wing — which includes improved art, music and academic classrooms and opened to students and faculty at the start of the school year — was named in her honor during an Oct. 13 ceremony with school administrators, board members and family members.

Bresnihan died after a battle with cancer at 85 in May 2020. She is survived by her loving family, and her friends and colleagues throughout the Lynbrook community. As board president, she was known for her deep devotion to the Lynbrook schools and her advocacy on behalf of children.

Bresnihan improved Lynbrook from the “bottom up,” as she said in her 1975 campaign speech for the school board. She began as an involved parent in the school community, later joined the PTA and finally ran for a board seat. Her speech was read aloud by Bresnihan’s daughter, Elaine, at the ceremony, in which Bresnihan listed her goals and promises as a school board candidate.

“I feel it imperative that an articulate expression of all schools of thought be made available for the school board to listen to and respond to,” Bresnihan wrote. “I promise to bring an open eye, a sharp mind, to the meetings of the board, and to keep an independent stature, with my only responsibility being the wellbeing of the children within the framework of a responsible budget.”

Bresnihan accomplished each of these goals, Elaine and Burak said. She also lobbied in Washington, D.C. and Albany as a member of the board’s Audit and Policy committees, and urged state legislators to reduce the administration of standardized tests.

Throughout her years of service, Bresnihan earned many accolades for her work: an award for Academic Excellence and College Service from SUNY Old Westbury, the Silver Bullet Award from the Nassau-Suffolk School Boards Association, Woman and Citizen of the Year from Lynbrook village officials, and many others.

In addition to her successes, Bresnihan’s peers recalled her steady attendance at school and community events. “Alice attended every single event, whether it was sports, music or an academic awards ceremony,” Burak said.

Board of Education President William Belmont said he was impressed by how involved Bresnihan was in and out of school board meetings. “No one, almost in any entity you get involved in, puts in as much time as Alice Bresnihan did,” he said.

Bresnihan and Belmont’s relationship began many years ago, when Belmont was the LHS Student Government Association president in the 1980s. Belmont acknowledged his admiration for Bresnihan’s relationships with local and state legislators, and her “historical perspective” and “full-encompassing” view on school board issues. Over their time together, he said, she took on the role of a mother figure.

“I really appreciate the relationship I had with her, for all that I learned from her, the perspectives she taught me and the passion she had,” Belmont said. He added that Bresnihan proposed an expansion of the LHS building more than 15 years ago, so it was “extremely fitting” for the new wing to bear her name.

“She really fought hard for this,” Burak said. “She was always a proponent of making Lynbrook a better place.”

The new wing of LHS will stand as a reminder of Bresnihan’s love for and commitment to the Lynbrook schools for many years to come.