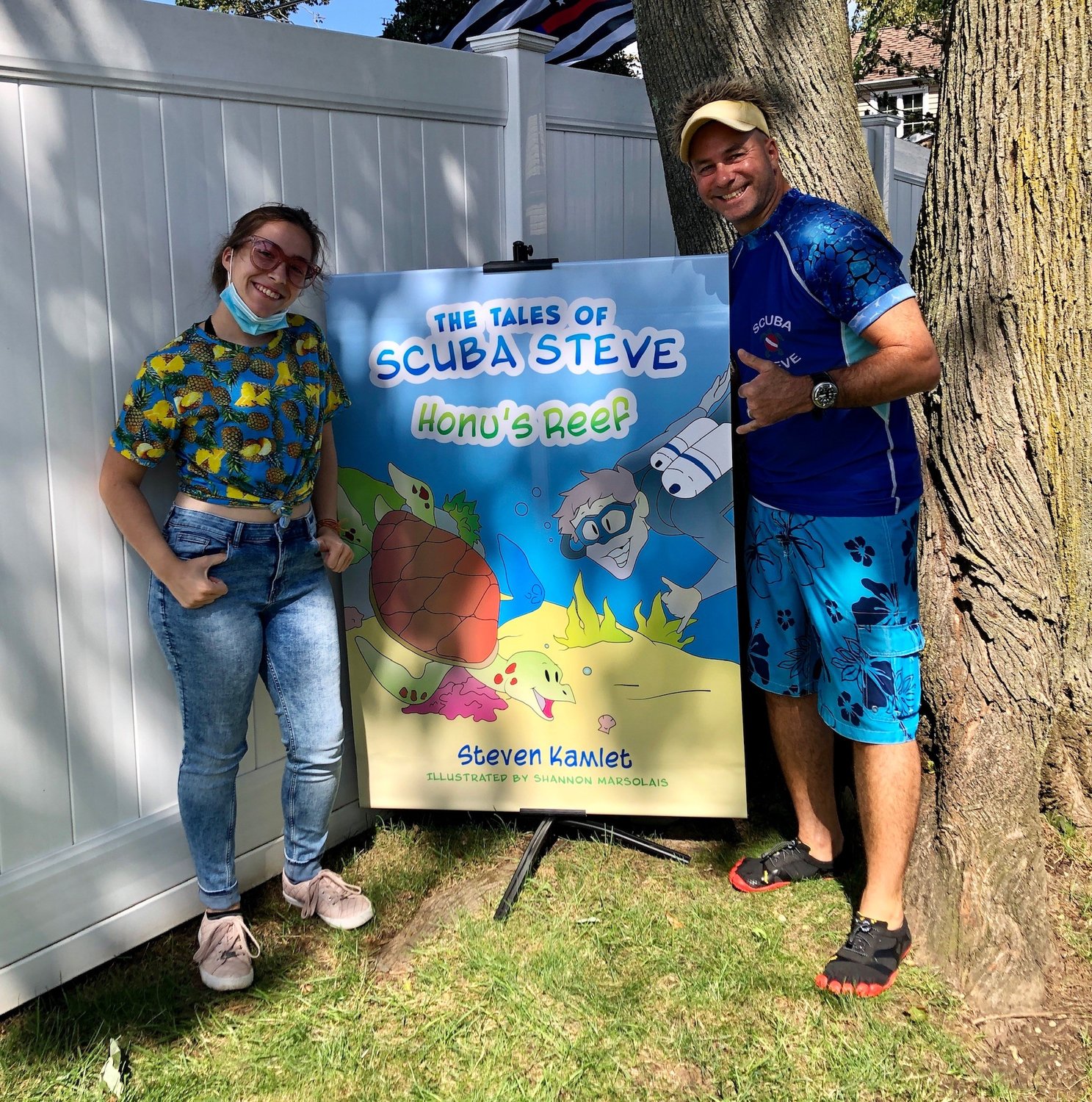 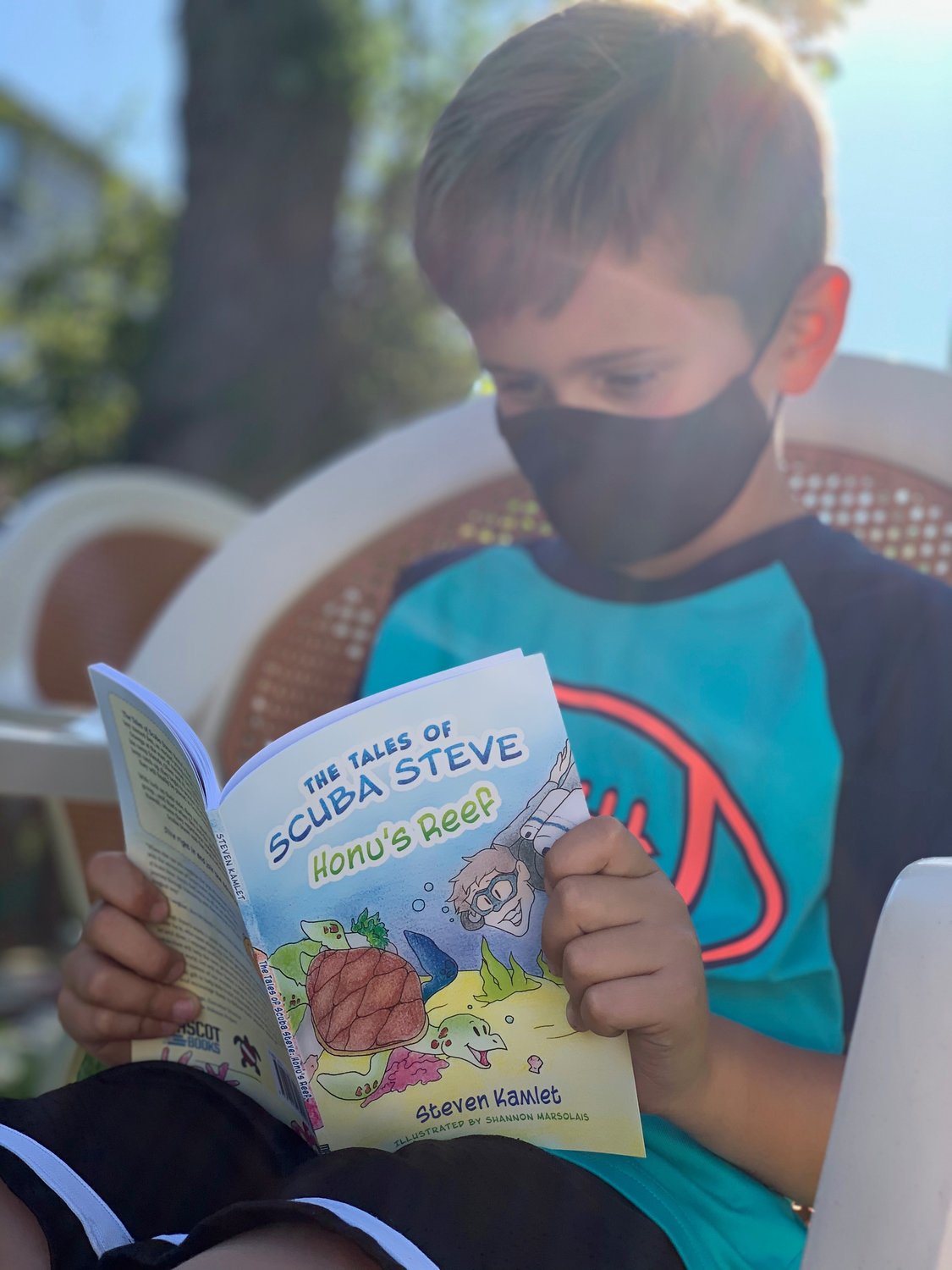 Hunter Rogoff, of Merrick, reads “Honu’s Reef,” the first book in “The Tales of Scuba Steve” series. In the book, a group of summer campers go on an undersea adventure to reconstruct Hawaii’s coral reefs.
Courtesy Steven Kamlet 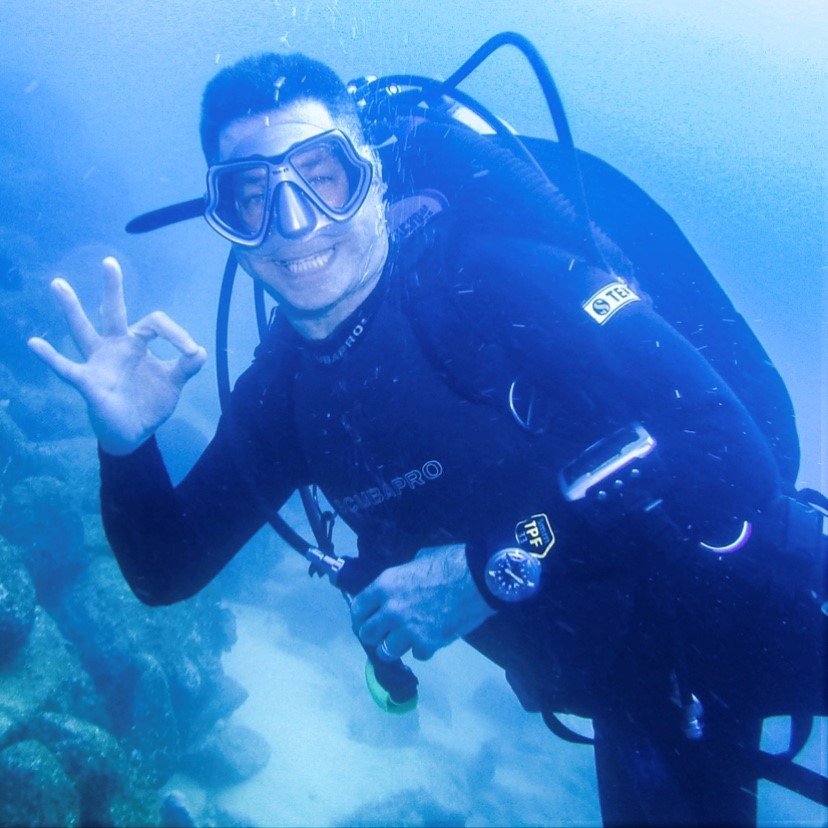 Kamlet has been a professional scuba diver for the past 15 years. He is also a swim instructor at Merrick Woods Day Camp.
Courtesy Steven Kamlet
Previous Next
By Alyssa Seidman

For Steven Kamlet, a dietician who changed careers so he could spend his summers working as a swim instructor, writing a children’s book was “uncharted waters” to him, he said. This year, the North Merrick resident, who is also a professional scuba diver, was inspired to translate his life experiences into a chapter book series with a moral message.

Kamlet has manned the pool at Merrick Woods Day Camp for more than a decade, earning the nickname “Scuba Steve” from admiring campers. “The kids needed a way to identify the various old guys,” Kamlet, 51, said, “and over the years it gradually built my silly shenanigans.”

One example is the fact that campers always want “Scuba Steve” on their team for the belly flop contest, even though Kamlet weighs “170 pounds soaking wet,” he added. “It started very innocuously, then somehow it was everywhere I turned.”

Although Kamlet has an extensive scuba-diving record, his favorite thing to do is teach children how to swim. His series is an homage to the campers who have inspired him over the years, he said.

The first book, “The Tales of Scuba Steve: Honu’s Reef,” also serves as a call to environmental action. In it, a group of camp friends are transported to the waters of Hawaii during their swimming lesson with the legendary Scuba Steve. Off the coast of the islands, they meet a turtle named Honu and go on an undersea adventure to reconstruct the coral reefs.

In seeking an illustrator for the series, Kamlet did not have to look very far. He contacted his daughter’s friend, Shannon Marsolais, an East Meadow High School student, who hand drew some illustrations for the author based on the first page of the book.

“It was exactly what I was looking for both in style and capturing the emotion of what it’s like to be at camp,” Kamlet said.

Marsolais, 17, worked on the illustrations for “Honu’s Reef” earlier this year. As an avid camp-goer herself, the process was very personal to her. “Summer camp is [an] enjoyable, key component of a child’s life,” she said. The book, she added, would also teach readers that “this is the only planet we have, and we need to take care of it.”

“The Tales of Scuba Steve: Honu’s Reef” is available for pre-order on Amazon.com. A portion of the book’s proceeds will be donated to organizations dedicated to conserving the world’s oceans, including Fins Attached and the Nakawe Project, two nonprofits that supported the book.

Kamlet also plans to use a portion of the proceeds to start “The Scuba Steve Scholarship Fund” at Merrick Woods, which would give a child who can’t afford camp the chance to experience it.

“Camp is all about the craziness of the friendships with people you only see three months out of the year, and the book is about that excitement of finding your friends again,” Kamlet said. “It’s a bond that can never be broken.”

Kamlet said he plans to write 39 books in the series — one for each day of camp.