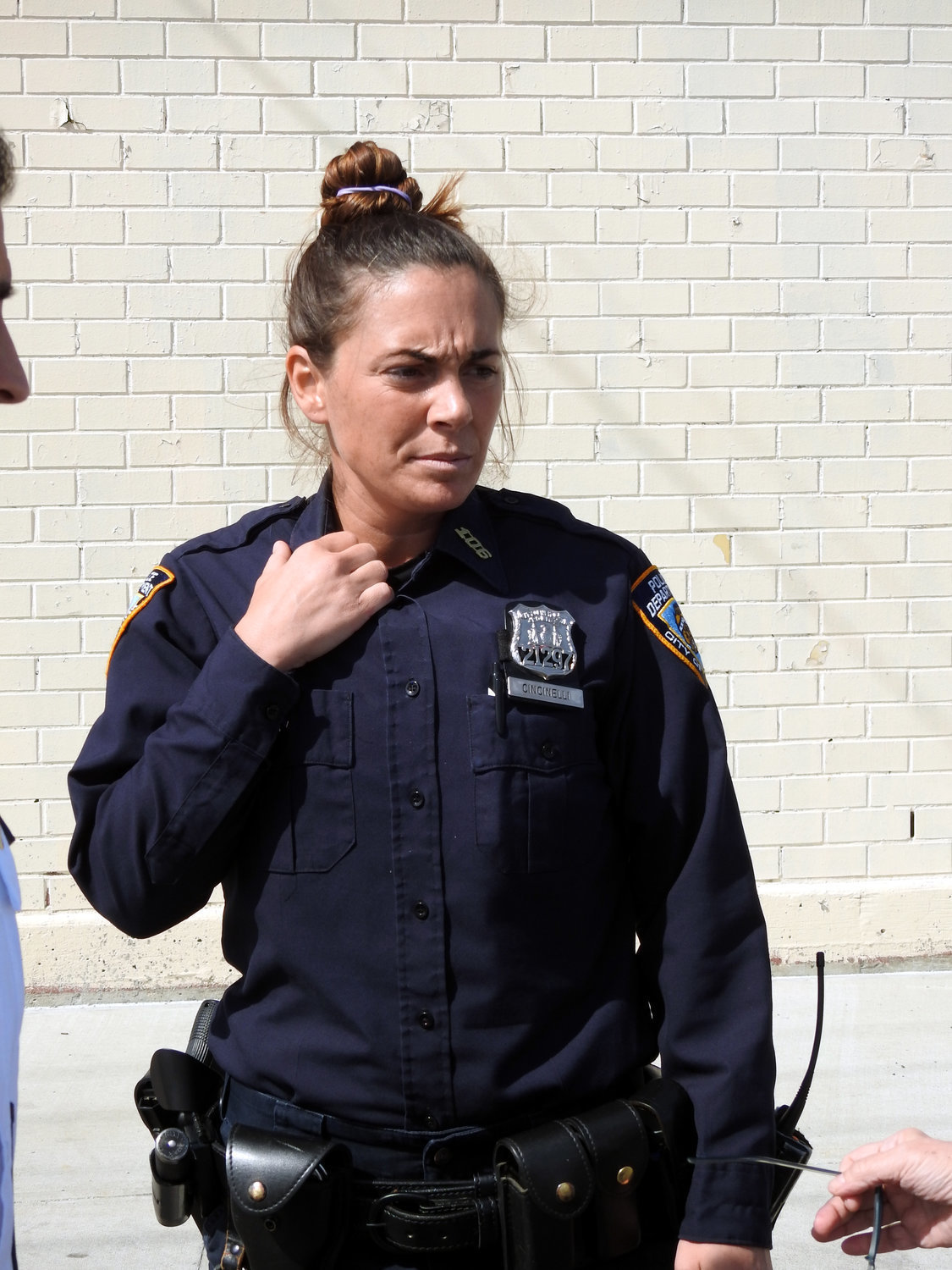 The trial for former NYPD officer Valerie Cincinelli, of Oceanside, was delayed after her lawyer requested more time to review evidence. Cincinelli has pleaded not guilty to two charges of murder for hire and one charge of obstruction of justice.
Courtesy Robert Stridiron
By Mike Smollins

A New York City police officer from Oceanside who is charged in an alleged murder-for-hire plot against her estranged husband and her boyfriend’s teenage daughter was delayed by a federal judge after the woman’s attorney requested more time to review recently submitted evidence.

The trial of Valerie Cincinelli, 35, was to begin on April 20, but U.S. District Judge Sandra Feuerstein delayed it on Feb. 27. The decision came at the request of Cincinelli’s attorney, James Kousouros. A new date for jury selection, in federal court in Central Islip, had not been announced at press time, but Feuerstein gave Kousouros until April 7 to review the material.

Cincinelli was arrested last May and pleaded not guilty to two charges of murder for hire — against her estranged husband, Isaiah Carvalho Jr., and her boyfriend John DiRubba’s teenage daughter — and one count of obstruction of justice. The obstruction charge stems from her alleged destruction of cellphones as a way to interfere with the authorities’ investigation. She has been held at the Metropolitan Detention Center in Brooklyn without bond since her arrest, and her trial is expected to last two weeks. After her arrest, she was suspended by the NYPD without pay after 12 years on the force.

In May, Feuerstein denied Cincinelli’s request for bond, saying she was a danger to the subjects of the alleged plot and the community, while noting she shows a “lack of impulse control and remorse.”

Kousouros asked for the delay after the government gave him transcripts of thousands of text messages and cell phone records from Carvalho and DiRubba, who is the government’s key witness in the case against Cincinelli.

Calls to Kousouros were not returned at press time, but last June he told the Herald that as the trial began, it would “become clear that Ms. Cincinelli never would and never did participate in the conduct that she’s charged with.”

Federal prosecutors have said Cincinelli had “a volatile” relationship with Carvalho and DiRubba, and that DiRubba had allegedly originally agreed to hire a hit man to murder Carvalho before changing his mind, notifying authorities and cooperating in their investigation.

Cincinelli allegedly also wanted the hit man to kill DiRubba’s teenage daughter. Prosecutors said Cincinelli was angry about having to share her NYPD pension with Carvalho in their pending divorce, and jealous of DiRubba’s daughter because of the time she spent with her father.

Inside the alleged plot

Cincinelli’s alleged plan was hatched in February 2019, when she asked DiRubba to hire a hit man to kill Carvalho and DiRubba’s daughter, according to the FBI. Carvalho filed for divorce from Cincinelli a month earlier after four years of marriage, and the two were in the middle of a custody battle for their two children.

According to authorities, DiRubba told Cincinelli that he would set a plan in motion to carry out the hits for $7,000, but instead went to the FBI. Kousouros has alleged Cincinelli gave DiRubba $7,000 to purchase gold coins, not to hire a hit man.

Under the direction of investigators, DiRubba continued to plot with Cincinelli and wore a wire so their conversations could be recorded. In one taped recording that he made as part of his cooperation, Cincinelli allegedly said the hit man should kill her estranged husband near his Holtsville place of work, saying, “It would not look suspicious because the murder would take place in ‘the hood,’ or ‘the ghetto.’” In another, DiRubba told Cincinelli that in the case of killing the teen, the hit man did not want to carry out the murder near a school, and Cincinelli responded, “Run her the f--k over, how about that?’”

Authorities informed Carvalho of the alleged plot, and staged photos of him hunched over in a car, surrounded by glass to depict his death. On May 17, investigators from the Suffolk County Police Department came to Cincinelli’s Oceanside home and told her that Carvalho had been murdered, which was a ruse at the direction of the FBI. Under the guise of the hit man, FBI agents also sent a text message to DiRubba, with a picture of the faux murder scene.

Immediately after police left, Cincinelli allegedly called DiRubba to discuss their alibis and told him to delete his text messages. The FBI recorded the call. Later that afternoon, Cincinelli was arrested.

Cincinelli’s defense has questioned DiRubba’s credibility as an FBI informant, citing his troubles with the law. He was accused of threatening to shoot a man over a $54,000 diamond ring on Jan. 15, 2019, telling him that he had ties to the Gambino crime family, according to the complaint.

The victim allegedly got into DiRubba’s car on East 39th Street near First Avenue in Manhattan at about 1:15 p.m. on the day of the crime to sell him the diamond, which was worth $54,832.

When the man got in the car, DiRubba told him he had a gun and demanded he get out of the car and leave the diamond or he would shoot him. He also allegedly claimed he was “connected with Gotti people,” referring to former Gambino crime boss John Gotti.

Kousouros has argued against DiRubba’s credibility as an informant, based on his alleged history with criminal activity.

Calls to DiRubba’s attorney, James McQueeney, were not returned at press time. Carvalho’s attorney, Erica Sakol, told the Herald in June she would not comment on the case while it is pending, and said any statements on Carvalho’s behalf would come through her.

If convicted of murder for hire, Cincinelli faces up to 10 years for each count, while obstruction of justice carries a sentence of up to 20 years.