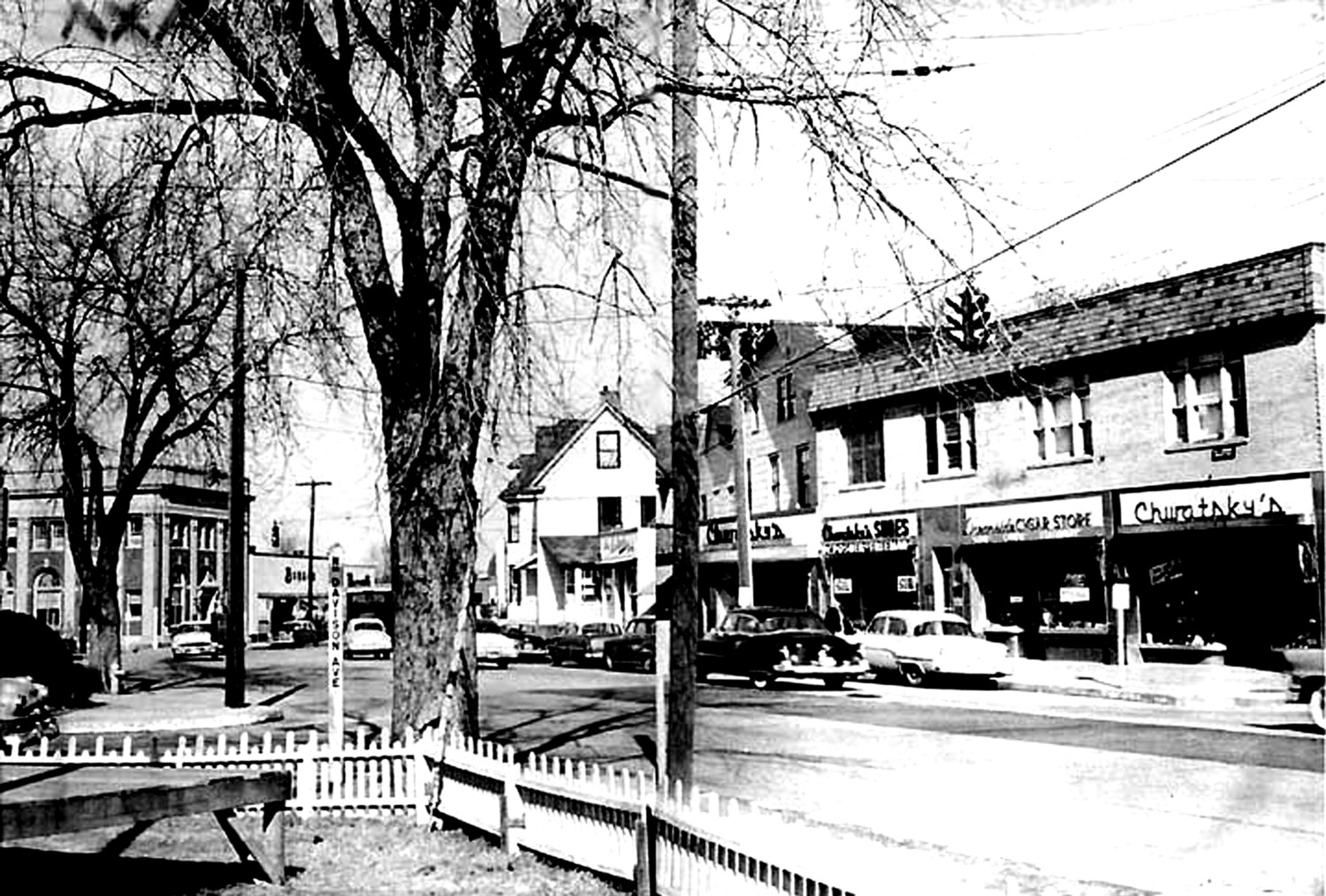 A view of the Oceanside triangle circa 1955-'56.
Courtesy Howard Levy 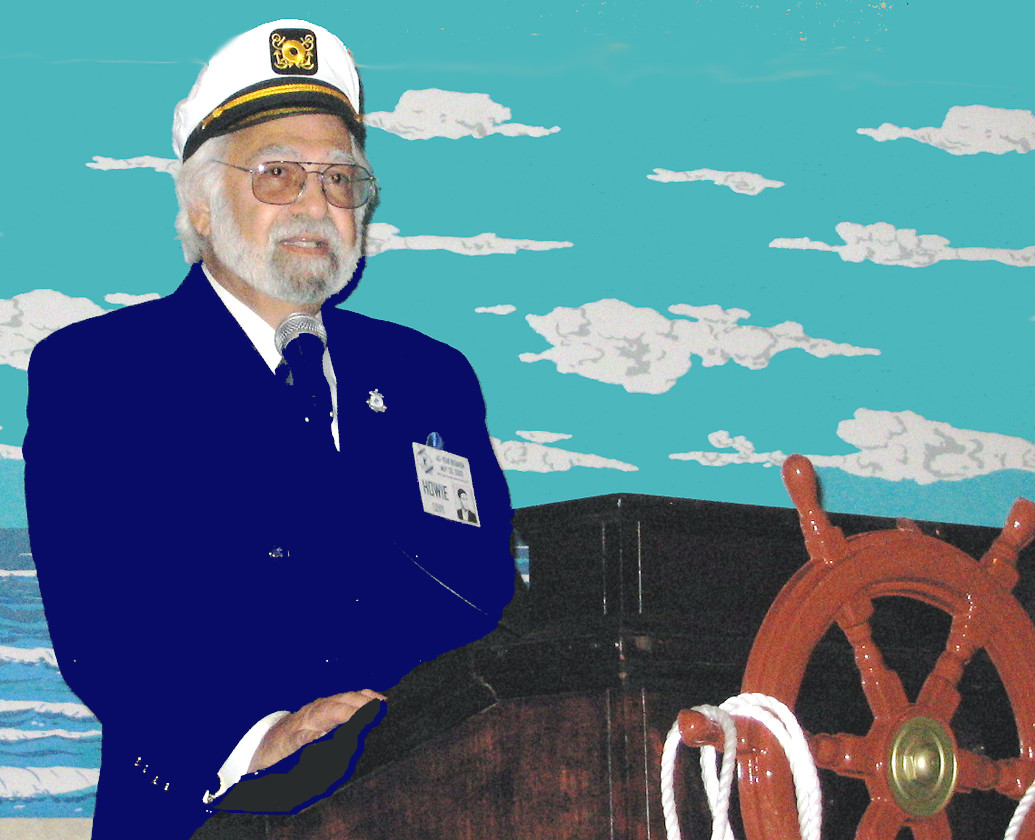 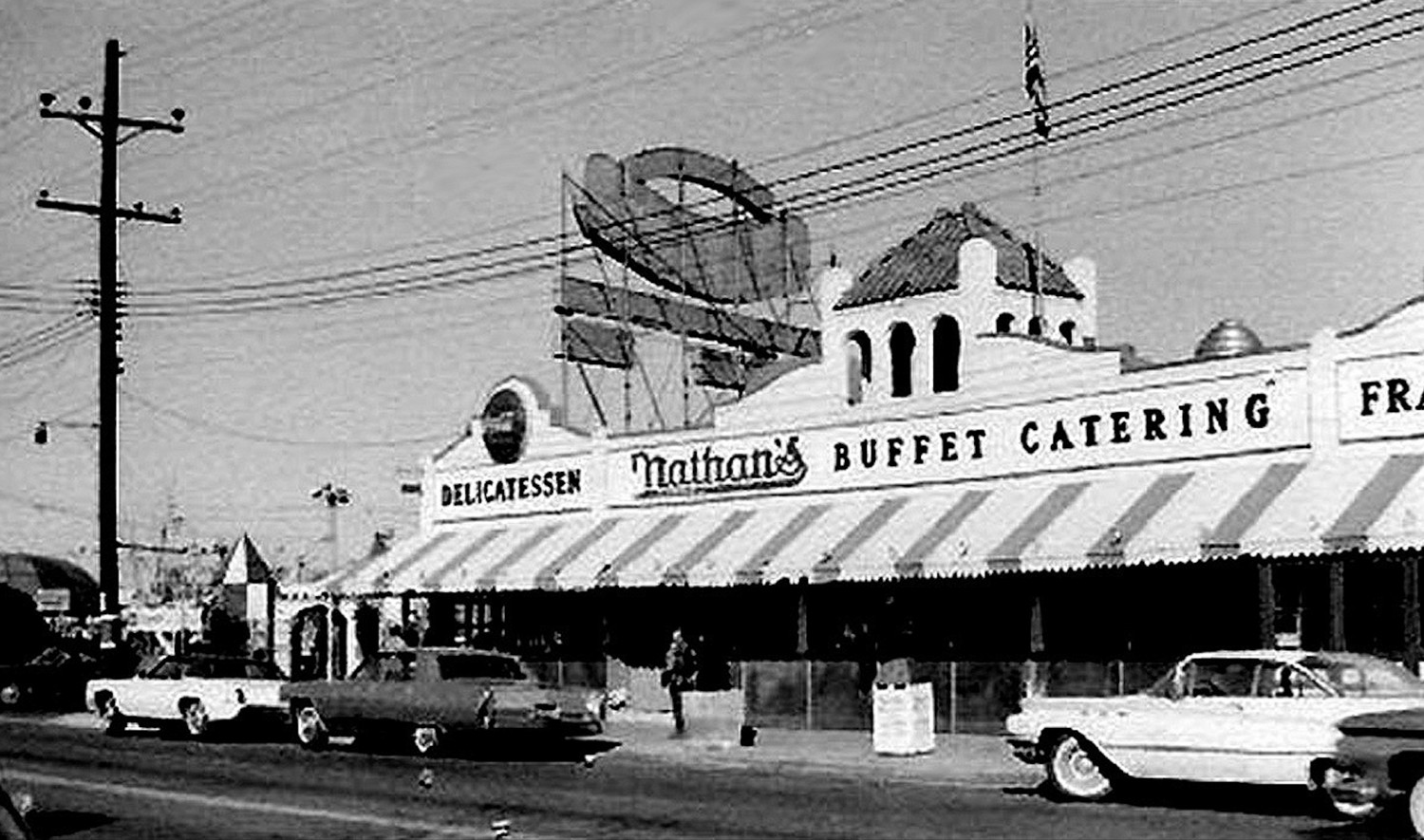 The site features many historical photos of Oceanside from the 1950s and 60s. Nathan’s in Oceanside was the first of the hotdog restaurant chain to open outside of Coney Island.
Courtesy Howard Levy
Previous Next
By Peter Belfiore

Howie Levy estimates he hasn’t lived in Oceanside for at least 50 years.
He left the community in 1966, and now the 75-year-old accountant lives in Las Vegas. Despite only spending 10 years of his life here, for Levy, an Oceanside High School class of 1960 graduate, the community never left him.
It is in a website where Levy has preserved the memories of his time in Oceanside, and through it has maintained contact with his more than 500 classmates over the years. On March 10, the site hits the 18-year anniversary of its founding.
The site, 1960sailors.net, is a place out of time in more ways than one. “I don’t think there’s anything else like it on the World Wide Web,” Levy said of his creation. Harkening back to an earlier era of web design, it features crude animated gifs, jittery text, auto playing music and links to other pages that don’t look like links. But, the site is a snapshot of the Oceanside of the 1950s and ’60s: the Oceanside that Levy remembers most affectionately.
“My time in high school was remembered so fondly,” Levy said by phone, but joked that things weren’t always good. “I had bad memories, too,” he added. “Like on weekends when I didn’t have a date.”


The impetus for the site’s creation, he said, was a 40-year class reunion he had been organizing. The website offers information about prominent buildings and figures of the time, and associated historical photos. One page is dedicated to the Oceanside Nathan’s, which had the distinction of being the first location of the hotdog restaurant chain to open outside of Coney Island.
A recent Herald obituary dedicated to Frank Januszewski, a beloved former OHS basketball coach who founded the school’s athletic hall of fame in 1960, is also posted. Photos of each class of 1960 reunion are available, too, excluding its first — the 10-year reunion. “I guess nobody brought a camera to that one,” Levy said.
Most of the photos were provided to him digitally. “I don’t have a physical collection,” he explained. “All you see pictured there were sent to me by email. All I had that you could hold in your hand is a yearbook.”
Levy’s favorite page is the reactions to his site, mostly from fellow classmates that he saves and archives. “It’s very personal to me,” he said of the section.
“I’m a CPA,” he added. “They’re not known for their creativity unless they get in trouble with the law. This is the most creative thing I’ve ever done, and it’s probably given me more pleasure than anything else.”
Levy does much to maintain his class’s cohesion; he has organized four of its seven reunions, and every year he sends birthday cards to the more than 200 classmates whose addresses he has. He even formed a corporation in the class’s name to facilitate hotel room rental for reunions. 1960sailors.net is the lynchpin of his efforts, he said. “The website is integral.”
His classmate Max Abbott, who still lives in the Third Street home he purchased after his discharge from the Navy in 1963, agrees. “Just that website alone has kept everyone in touch,” he said. “What he did is phenomenal. Most classes don’t have that.”
“All those pictures he has on that website,” Abbott added. “That was basically Oceanside. Period.” Abbott said that in addition to the reunions and the memorabilia, Levy tracks the passing of class members and posts death notices. “Most classes don’t have any idea who died or who is living,” Abbott said. “It’s impressive, it really is.”
Levy estimates that of the classmates he knows, about 100 have died. There are about 30 to 40 whose whereabouts or status he doesn’t know.
In addition to keeping the memory of the 1960 sailors alive, in 2012 Levy brought the force of his organizing to fundraise thousands of dollars for struggling Oceansiders in the wake of Hurricane Sandy, donating to Oceanside Community Service.
“Collectively, they raised quite a bit,” recalled former OCS President Bob Transom. “He’s the real deal. And quite the character, too.”
While Levy’s personality came across in phone interviews, it is on full display on 1960Sailors.net. “It gives me a very warm feeling that I invented this,” Levy said of his site. “All over the website you should see the logo I created, Memories ’R Us, in the style of the Toys ’R Us logo. I like to use that a lot.”