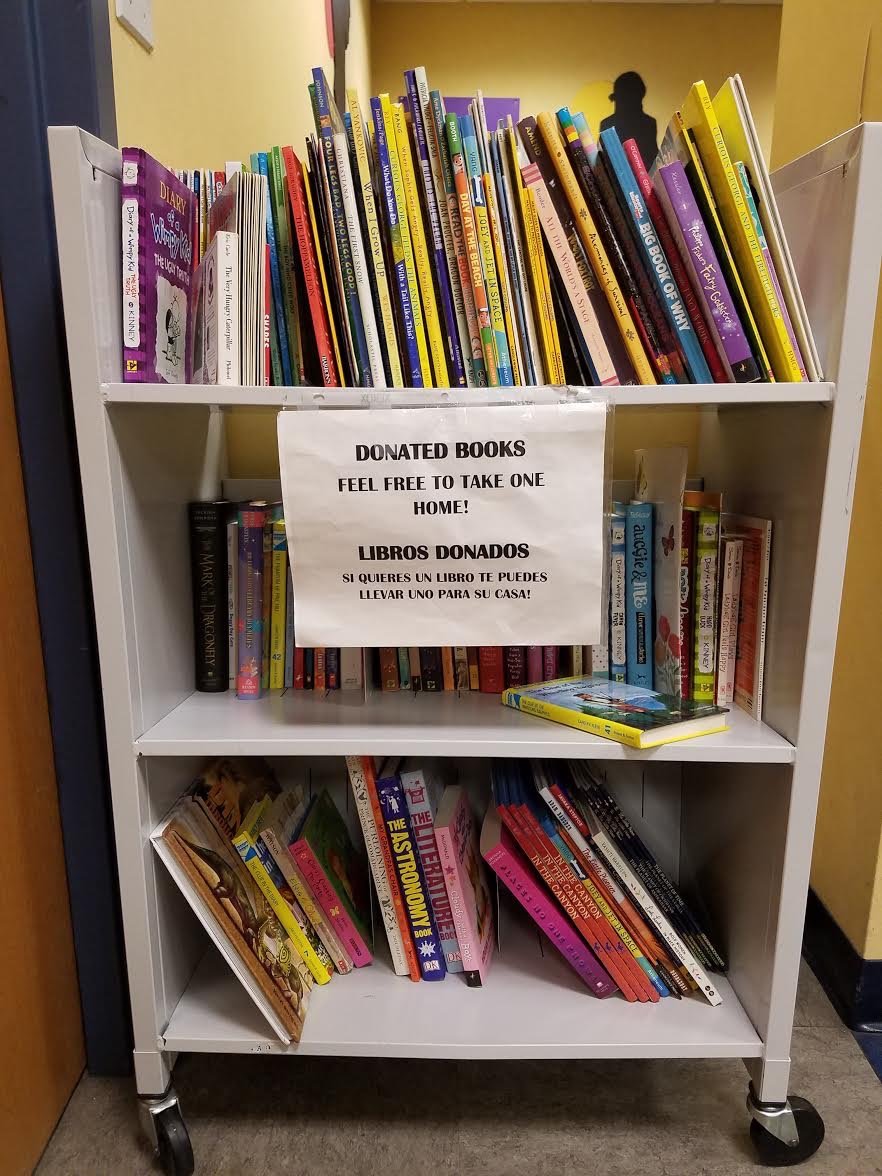 The outpatient display at NYU Winthrop Hospital, where donated books from Hindi’s Libraries are available for patients.
Courtesy Leslie Gang
By Matthew Ferremi

Dr. Hindi Krinsky, an English teacher and curriculum coordinator at the Hebrew Academy of the Five Towns and Rockaway High School, died last August at age 32, after what was described as a brief illness. Her husband, Cedarhurst resident Dovid Kanarfogel, 34, felt inspired to do something impactful in her memory.

Kanarfogel, a lawyer, and Leslie Gang, the director of communications and the executive administrative assistant at the Brandeis School in Lawrence, brainstormed the idea of having people donate children’s books. It began in November with small boxes for donations placed at a number of HAFTR campuses.

The duo contacted parents of HAFTR students about donating books, and the boxes filled quickly. The volume of books was much more than they anticipated. “We were expecting around 50 books donated,” Gang said, “but HAFTR told us to take the books home, since there were over 100 books donated.”

Kanarfogel and Gang then contacted local organizations about donating books, and named their project Hindi’s Libraries. “Most people with children have books at their homes,” Gang said. “It’s great to be able to donate books to places such as NYU Winthrop hospital, where children in their outpatient center now have the access to read.”

North Woodmere resident Inna Kern, who has known Gang for roughly four years, has already donated more than 100 books to Hindi’s Libraries. Recently she gave out books to the children at her daughter’s sixth birthday party. “I made 25 goody bags that included one book in each bag,” Kern said. “I never met Hindi, but you could tell the impact she’s had on the children in the community. Books are such a unifying concept, and it’s inspiring to see what Hindi’s Libraries has done.”

Kanarfogel said that more than 4,000 books have been donated to the project, and that he and Gang have sent out roughly 2,500. “Half of my den is filled with books at this point,” he said. “It’s an easy process to donate if you live in Nassau County or anywhere local, since myself or Leslie will personally come to you and pick up the books.”

Kanarfogel explained that he categorizes every donated book by age. “The books range from the ages of 4 to 17,” he said, “and I just organize them by age and make sure they’re appropriate for children to read.”

Gang credits Kanarfogel for his efforts on behalf of the project despite losing his wife. “In a situation where many people would feel down, Dovid is up and about,” she said. “He’s committing himself to this project while having a full-time job and raising five kids by himself. To me, what he does is awesome and motivating.”

Since January, Hindi’s Libraries has become more than a local project. The outreach has expanded beyond Nassau County, and there are now book drop-off locations in Brooklyn, Rockland County and Teaneck, N.J. Gang said she has also contacted publishing companies such as Simon & Schuster and Scholastic as well as Barnes & Noble and Buy Buy Baby, and all four companies have donated books to the project.

“All of these companies are donating brand-new books to us,” Gang wrote in an email. “Several children’s hospitals and other organizations that work with sick children were not able to receive our gently used books due to the concerns of germs. [But] with all of these new books we received, we were able to expand our project into children’s hospitals and other organizations throughout the state.”

Kanarfogel said that Gang is responsible for expanding Hindi’s Libraries beyond the Five Towns. “Leslie has been the driving force behind Hindi’s Libraries just by reaching out to CEOs of publishing companies,” he said. “She’s an amazing person, and it shows with the work that she’s put into this.”

Roughly 100 books have been donated to NYU Winthrop, according to Melanie Bucholtz, a child life specialist at the hospital. “The books have been disappearing,” she said. “The kids are taking them home and reading.”

Kanarfogel noted how proud his wife would be if she could see what Hindi’s Libraries has turned into. “Hindi would be proud of the fact that we’re giving children who don’t have the access to books the opportunity to read,” he said. “She had a doctorate in literacy education, and getting kids to read was one of her passions.”

To make a donation of books, go to www.hindislibraries.com.