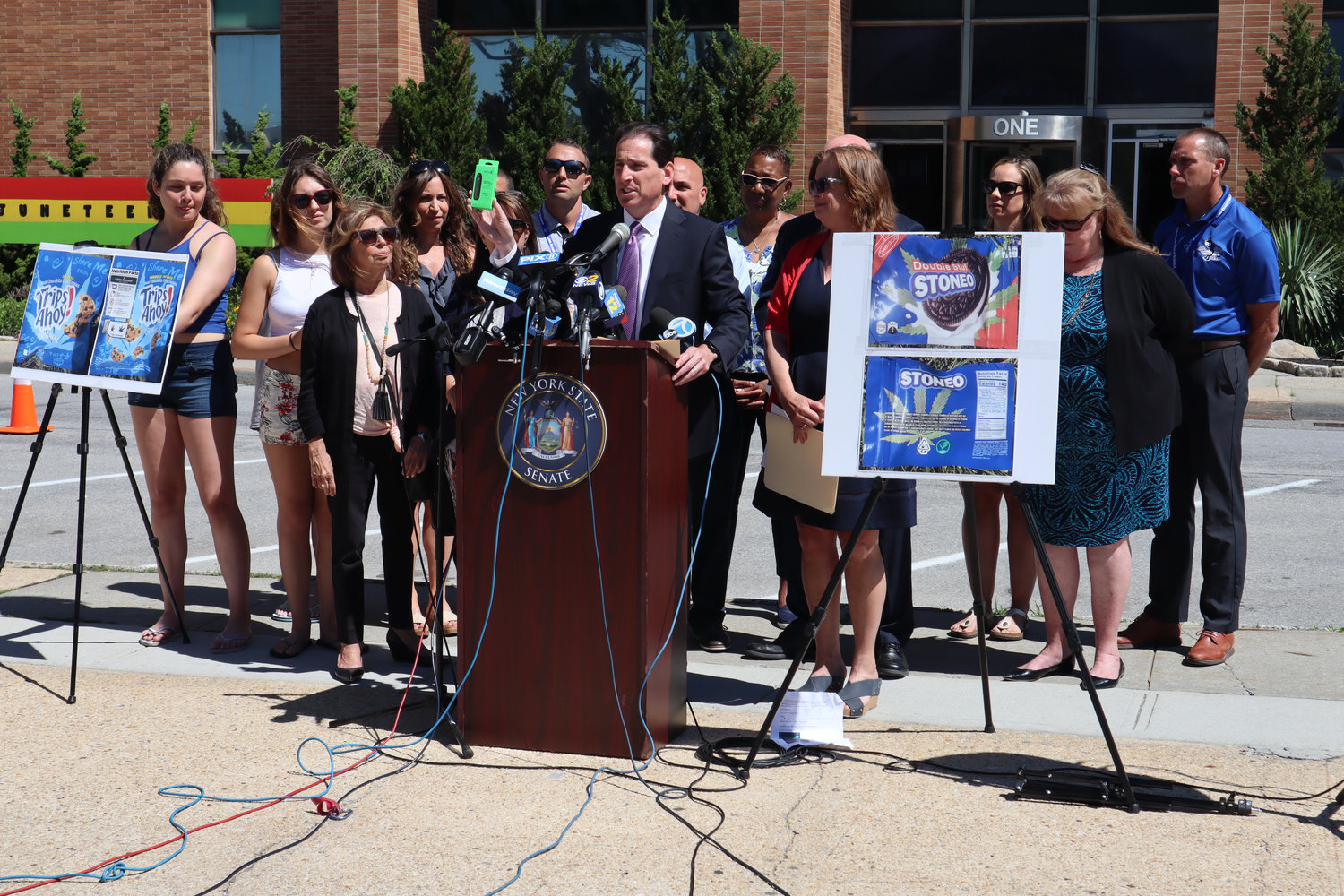 Officials urge the state health department to ban delta-8 after being alerted of packaging that resembles popular cookie brands for kids. Kaminsky displayed a common delta-8 product, which can be purchased at some local convenience stores.
Darwin Yanes/Herald
By Darwin Yanes

Local officials gathered in front of Long Beach City Hall Wednesday to denounce the sale of cannabis-infused products, which they say are being marketed to children.

The news conference comes a day after Long Beach Superintendent of Schools Jennifer Gallagher warned parents in a statement about cannabis-laced cookies that are designed to look exactly like Chips Ahoy and Oreos. The cookies are being sold as "Stoneo" and "Trips Ahoy."

“My nightmare is that young children might consume these without even realizing what they are,” Gallagher wrote.

State Sen. Todd Kaminsky, along with school and elected officials, led the effort in calling for the State Department of Health to ban the cannabis compound -- delta-8. He said that although a store may market a product as delta-8, people cannot be sure that it’s not another product. He denounced the accessibility of purchasing the product and the packaging.

Delta-9 is the THC compound found in marijuana.

“Delta 8 is exploiting a loophole because it has part of hemp in it,” Kaminsky said. “And the claim that Delta 8, that maker use, is “hey this is legal under the new hemp law.” New Yorkers know that can’t stand.”

Assemblywomen Missy Miller and Judy Griffin joined Nassau County Executive Laura Curran and Kaminsky in sending a letter to state Health Commissioner Howard Zucker asking for a ban on delta-8. The state health department has 43 more days for comments to review a ban on delta-8 and other cannabis-related products.

Long Beach Police Commissioner Ron Walsh said that Dr. Nature Rx. was the only licensed CBD vendor in the city that sold cannabis-infused cookies. The store, however, took the products off the shelves. He added that he will send a package of "Stoneo" to a lab to be tested.

Like other municipalities in the state, the City of Long Beach has until December 21 to decide if they will opt-in or out of the sale of Marijuana. In April, officials said they will seek public comment before making a decision.