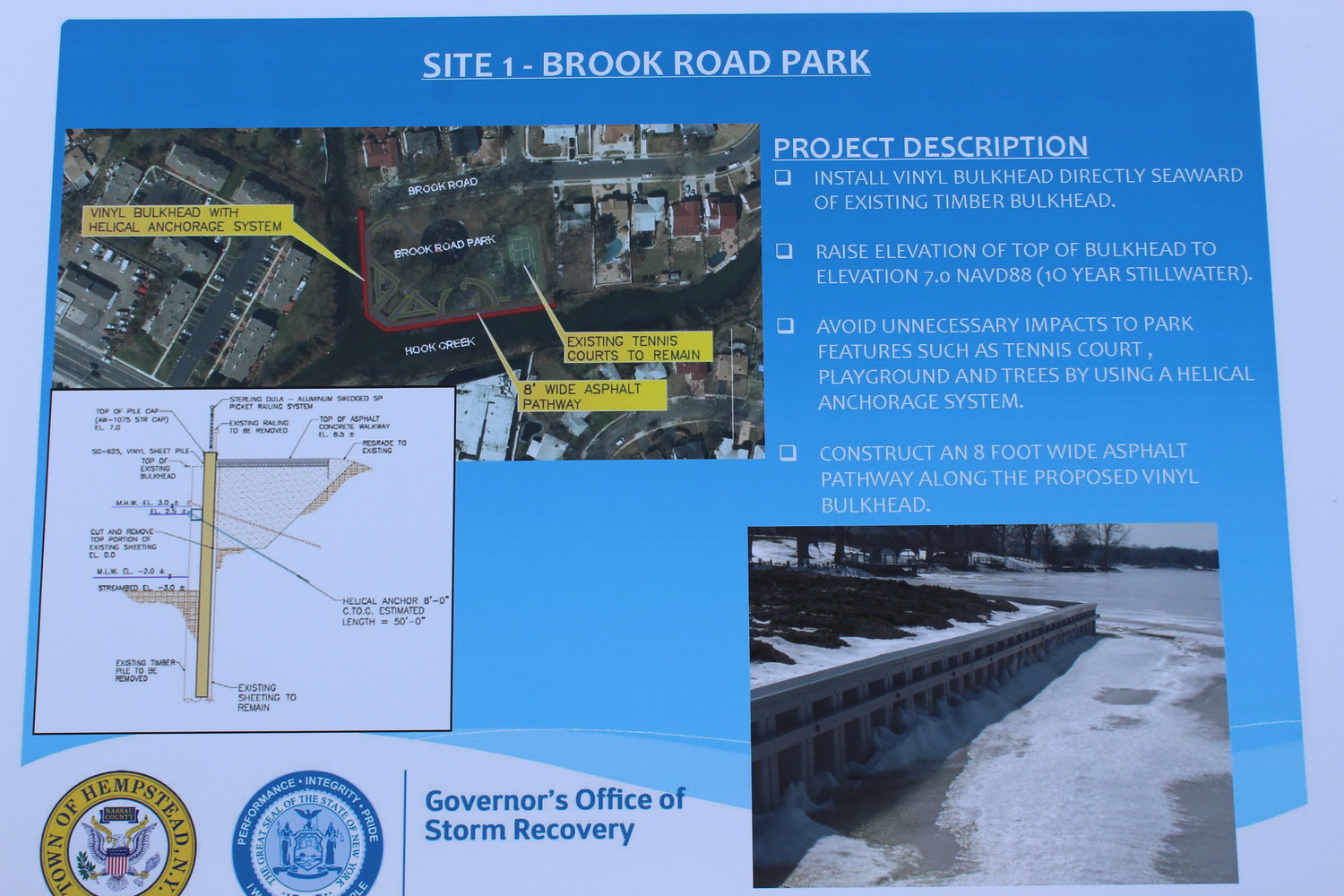 A sign detailed the scope of the Governor’s Office of Storm Recovery’s project.
Melissa Koenig/Herald
By Melissa Koenig

During Hurricane Sandy, Hook Creek overflowed, flooding the backyards of many homes in the Mill Brook section of Valley Stream. Five years have passed, but the problem has persisted in the area during storms.

This was the reason, he said, for joining the New York Rising Planning Community in 2016: to brainstorm flood mitigation plans for South Valley Stream, using funds from the Governor’s Office of Storm Recovery. The committee worked with State Sen. Todd Kaminsky, Hempstead Town Supervisor Laura Gillen and Town Councilman Bruce Blakeman, who presented the $3.7 million plan at a news conference on March 9. The project is part of a larger $60 million investment in flood control and recovery projects for the area.

“The flood prevention and resiliency plans that we are unveiling here today are blueprints for a brighter future as we deal with climate change,” Gillen said. “By building stronger and smarter, we will help protect thousands of additional homes and businesses from storm surges and tidal flooding in South Valley Stream.”

The plan includes installing a vinyl bulkhead to expand the lifespan of the seawall, according to Gillen. “The wood sidings that you see around here usually last only about 20 years before they start deteriorating and breaking down,” she said. “Our new vinyl bulkheads will double the lifespan of the bulkheads and will be built a full foot higher than is already in place.”

The plan would also fund the installation of a tidal wetland, elevated berms and check valves to further reduce the risk of flooding in the area. As part of the project, a new nature walk would also be installed at the Brook Road Park, adjacent to Hook Creek.

“The shoreline improvements in Valley Stream are vitally important to the community on several levels,” Blakeman said. “The structural enhancements will decrease our flood risk, while new designs to Brook Road Park and its pathway will increase aesthetics and provide our community with a wonderful refuge.”

Altogether, more than 1,600 residential and 24 commercial properties in South Valley Stream were damaged during the storm, which left many without power for weeks. “More than five years from Superstorm Sandy, flooding is still a major problem in South Valley Stream,” Kaminsky said. “This game-changing project will go a long way toward dealing with that issue, while at the same time providing greater recreational opportunities for residents there. The greenway that’s featured here is just a tremendous use of modern thinking with how we’re going to be restructuring parks and blending into nature.”

A Request for Proposals for contractors to bid on work for the project is open. The elected officials expect a bid to be awarded by April, after which construction, which is expected to take six months, would begin.

“This project grew directly from community engagement,” said Laura Munafo, deputy director of New York Rising Community for Long Island. “This is what Gov. Andrew Cuomo envisioned when he created the community reconstruction process. We will never forget what Sandy did to us, and each time the wind and waves pick up, as they have twice in the past two weeks, we are reminded of the work we need to finish.”

“I’m just really thrilled that this is happening,” Campbell told the Herald. “At some points, my neighbors were so skeptical that it would happen, and I would say, ‘It’s happening, it’s happening,’ and so I’m happy to see some indication that our hard work is going to pay off very soon.”