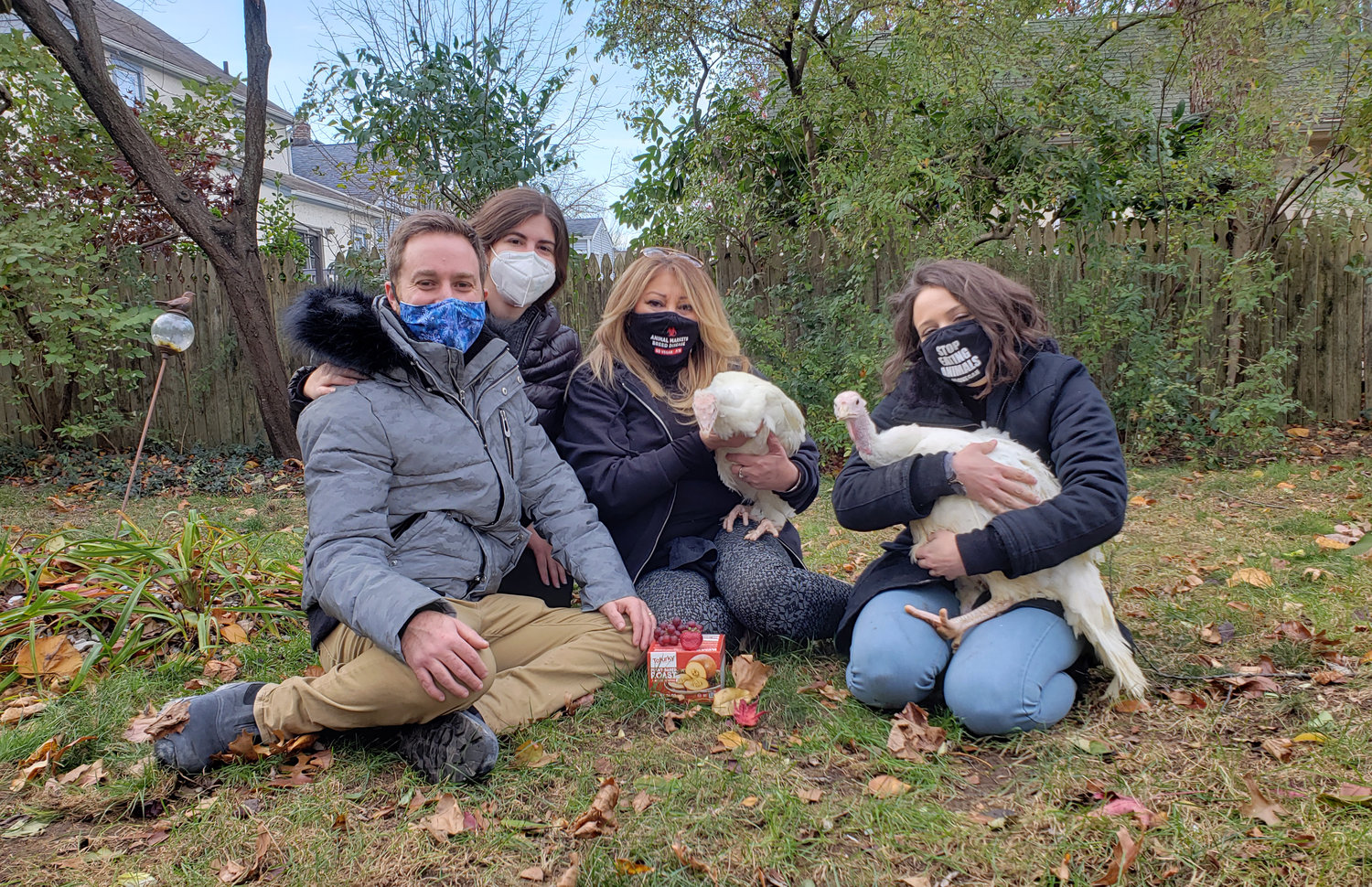 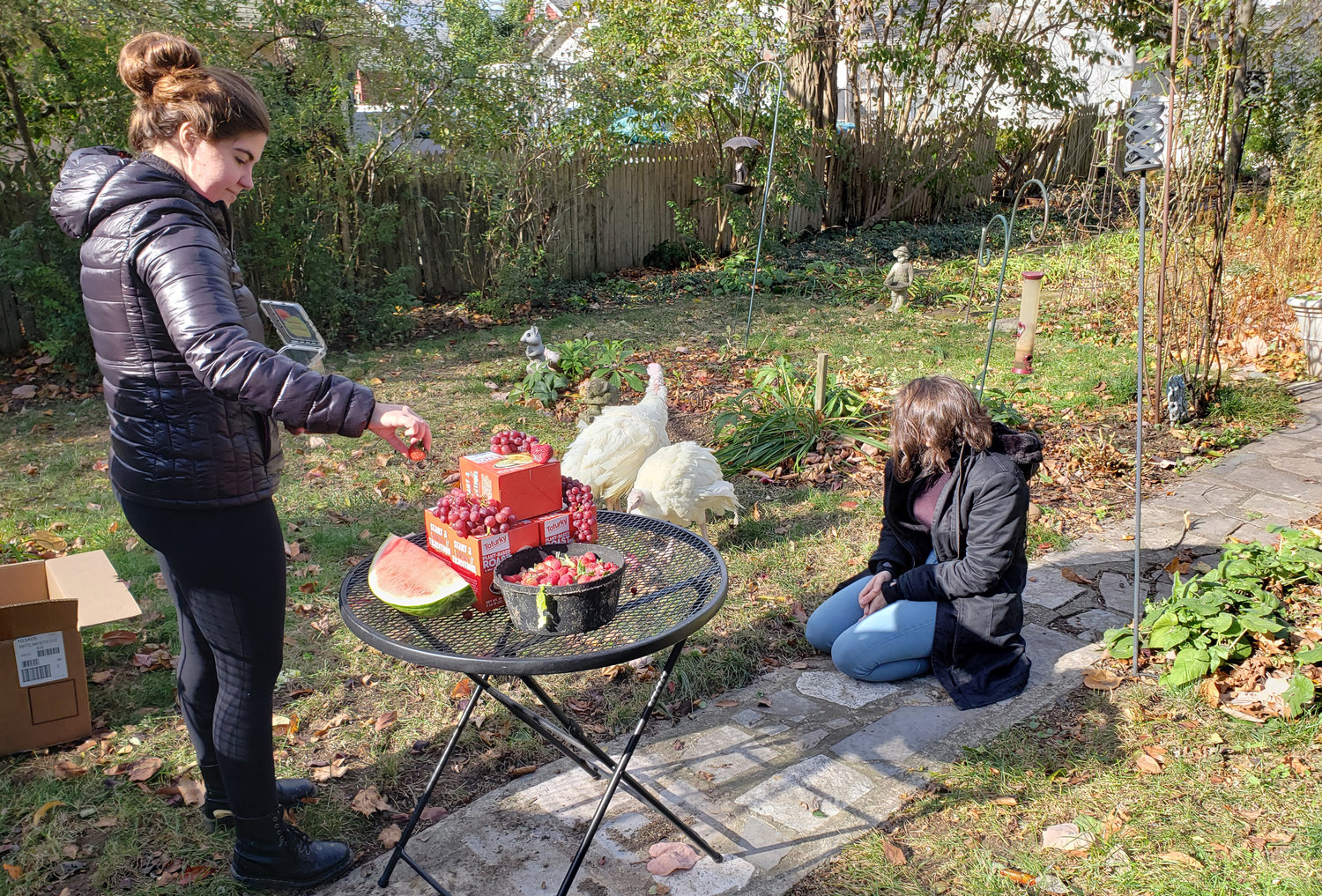 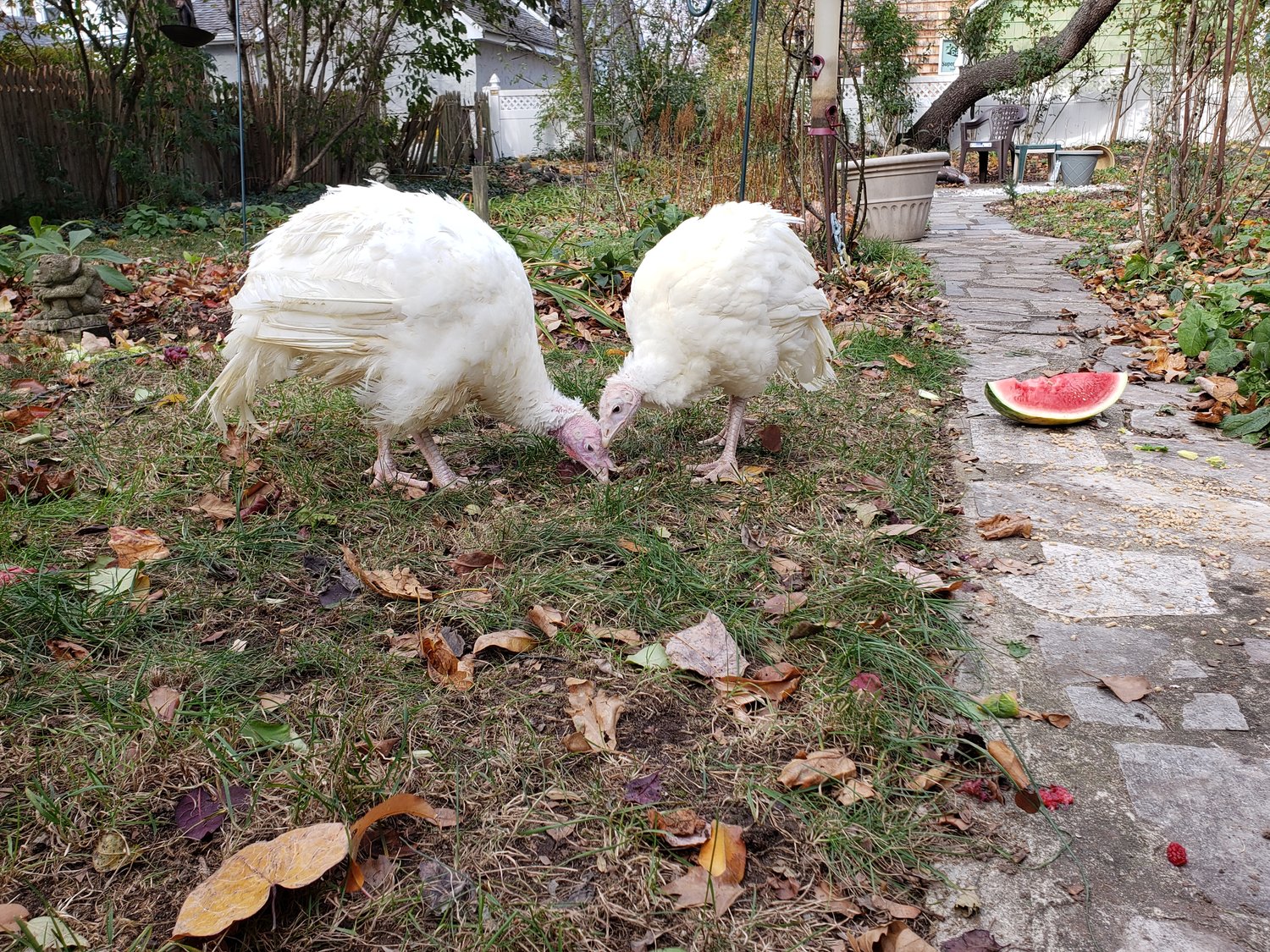 Two newly rescued turkeys were the center of attention — instead of being the main course — at the People for the Ethical Treatment of Animals’ special pre-“Thanks-Vegan” feast on Nov. 19. Malverne animal rights activist John Di Leonardo invited two rescued turkeys to gobble fresh fruit and vegetables in his backyard.

“Our end goal is always to get these farmers to change their business model,” Di Leonardo said, adding, of the birds, “These guys are extremely lucky, because they’re going to get to live.”

Di Leonardo is a senior manager of PETA and the founder of Long Island Orchestrating for Nature, an animal-advocacy nonprofit. PETA members, along with Brooklyn-Queens Animal Save, rescued the turkeys from New York City live-animal markets, and they are now in foster care with LION.

More than 46 million turkeys are killed each year for Thanksgiving alone, Di Leonardo said, and most of them are just infants, under 26 weeks old, when they are hung upside down and dragged through an electrified bath. Di Leonardo added that at most slaughterhouses, workers cut the turkeys’ throats, and at live-animal markets they are stacked in excrement-covered cages — conditions that allow pathogens such as the coronavirus to spread to humans.

“The smell in those cages are just so putrid,” said Rachel Levy Ejsmont, an animal rights activist who rescued one of the turkeys. “The living conditions that they’re in … it’s really horrific.”

The guest turkeys were a bit reluctant at first to eat the fresh fruit, because according to Di Leonardo’s wife, Juliana, they aren’t used to eating natural foods. “It’s kind of like a shock to them,” she said. “Also, because of how they’re treated at these animal markets, it’ll take them a bit longer to warm up to people.”

Her husband said that PETA had rescued about two dozen birds in New York this year, and noted that many farmers and food markets have started to make a transition toward veganism. While they still have a long way to go, Di Leonardo said he was hopeful that the trend would continue nationwide.

“I think we’re making a lot of progress in promoting that change,” he said. “The fact that they’re able to let them go, they realize in their heart that this is the right thing to do.”

The event was part of PETA’s #ThanksVegan campaign, which offers vegan recipes and facts about the wonders of turkeys. In addition, PETA provides mentors for those interested in saving a turkey by choosing a vegan meal.

“When you approach people in a nice way, they realize that we’re just like them,” Di Leonardo said. “Having one-on-one conversations with people who want to learn about the vegan lifestyle, I’ve seen their eyes light up and you do see that spark in them.”