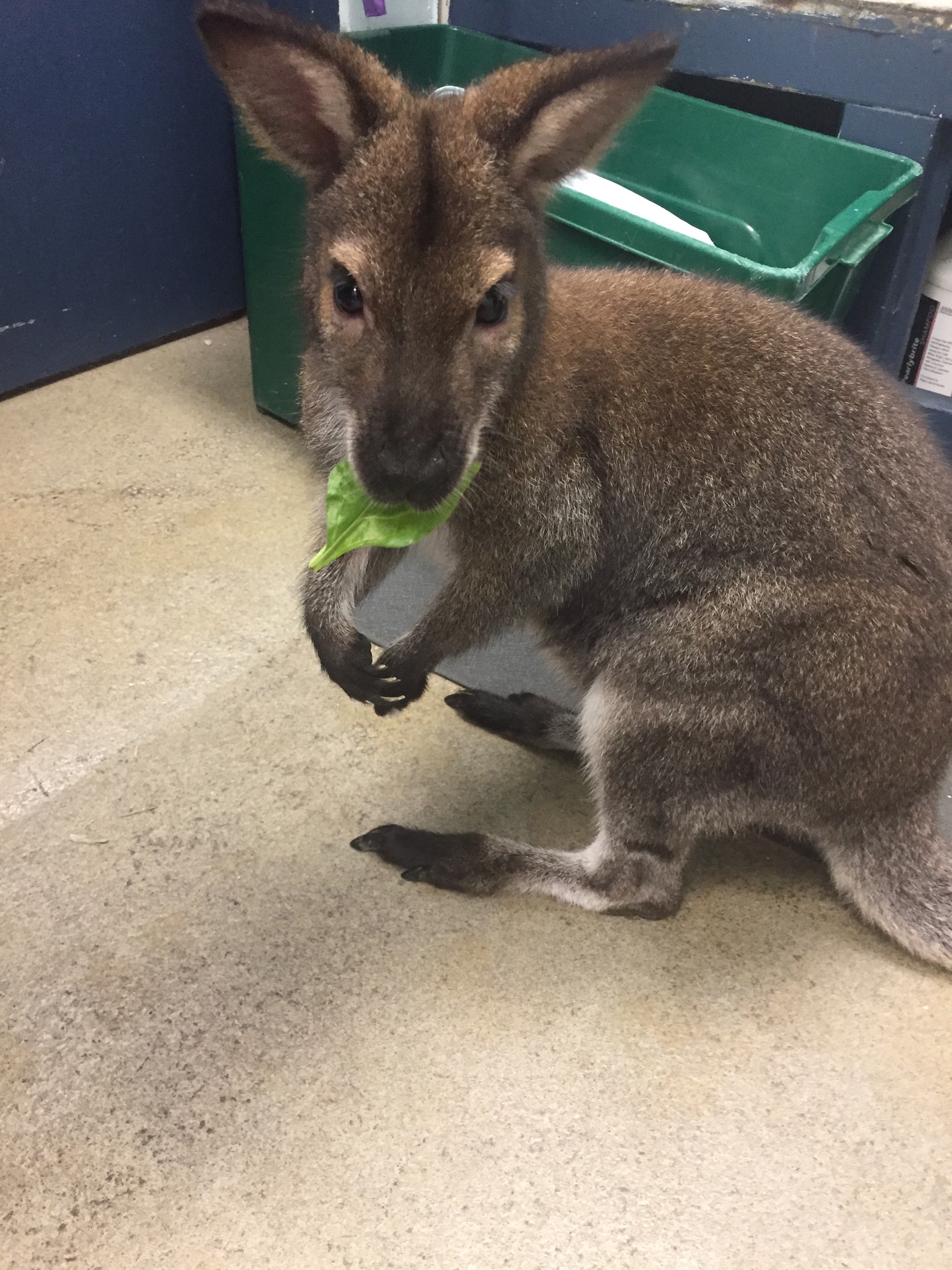 A wallaby found starving in an East Rockaway garage has gained 2.5 pounds at the Mineola Animal Hospital, where he was admitted on Jan. 31.
Courtesy David Kolins
By Melissa Koenig

An East Rockaway man may face criminal charges for harboring a wallaby, which are illegal to own in New York, at his home at 61 Seawayne Road. The wallaby was discovered without food or water in a cold garage on Jan. 31.

Now, the Nassau County Society for the Prevention of Cruelty to Animals plans to take legal action against Larry Wallach, an exotic animal exhibitor who owns the house on Seawane Road. Wallach was not home at the time of the discovery of the animal, according to one of his neighbors, who said that he was found unconscious in his home last month and has been in the hospital in critical care ever since.

His absence, however, has not prevented people from wanting justice for the animal. An online petition entitled “Justice for Wallaby Found in Squalid Conditions,” had 725 signatures as of Feb. 3. The petition seeks to imprison Wallach for the poor treatment of the wallaby. “…If he did capture the animal, he must be punished for not only breaking a law, but for putting a wild animal’s well being in jeopardy,” Lindsay Savitzky wrote in the petition.

When the wallaby was found, he weighed 17.8 pounds, less than half the weight of an average adult wallaby. “He looked very small and thin to us, and that’s why we called the vet to go there,” said Gary Rogers, a spokesperson for the SPCA said.

David Kolins, a veterinarian at Mineola Animal Hospital, noticed that the wallaby looked sickly. “When he first came in, he was thin,” he said. “His spine — it was just sticking up.” He added that the muscles were “just shriveled and wasted in his back legs.”

Kolins immediately ordered wallaby food, which looks like dog pellets, and fed the wallaby hay. He also ordered a blood test, which showed that the wallaby’s liver was shutting down from starvation.

With enough food, the liver damage is reversible and may be cured within a week or two, at which point the wallaby will be able to go to an animal sanctuary. “We’ve already been contacted by a dozen organizations,” Kolins said.

Even in the animal sanctuary, however, the wallaby will likely have to be in physical therapy for six months to regain muscle in his back legs. In the meantime, the animal has gained 2.5 pounds since he was brought into Mineola Animal Hospital and seems to be feeling better. “He’s eating like a horse, drinking like a horse and going to the bathroom like a wallaby,” Kolins said, adding that the wallaby is very friendly.

This is not the first time that Wallach has been in trouble for his treatment of animals. In 2012, the United States Department of Agriculture filed a complaint against Wallach for violating the Animal Welfare Act several times between 2008 and 2011. According to the records, Wallach housed “an exotic feline” in an open garage and a wallaby in an area that did not provide adequate space for the creature.

Nassau SPCA officials are still investigating how the wallaby came to Long Island.