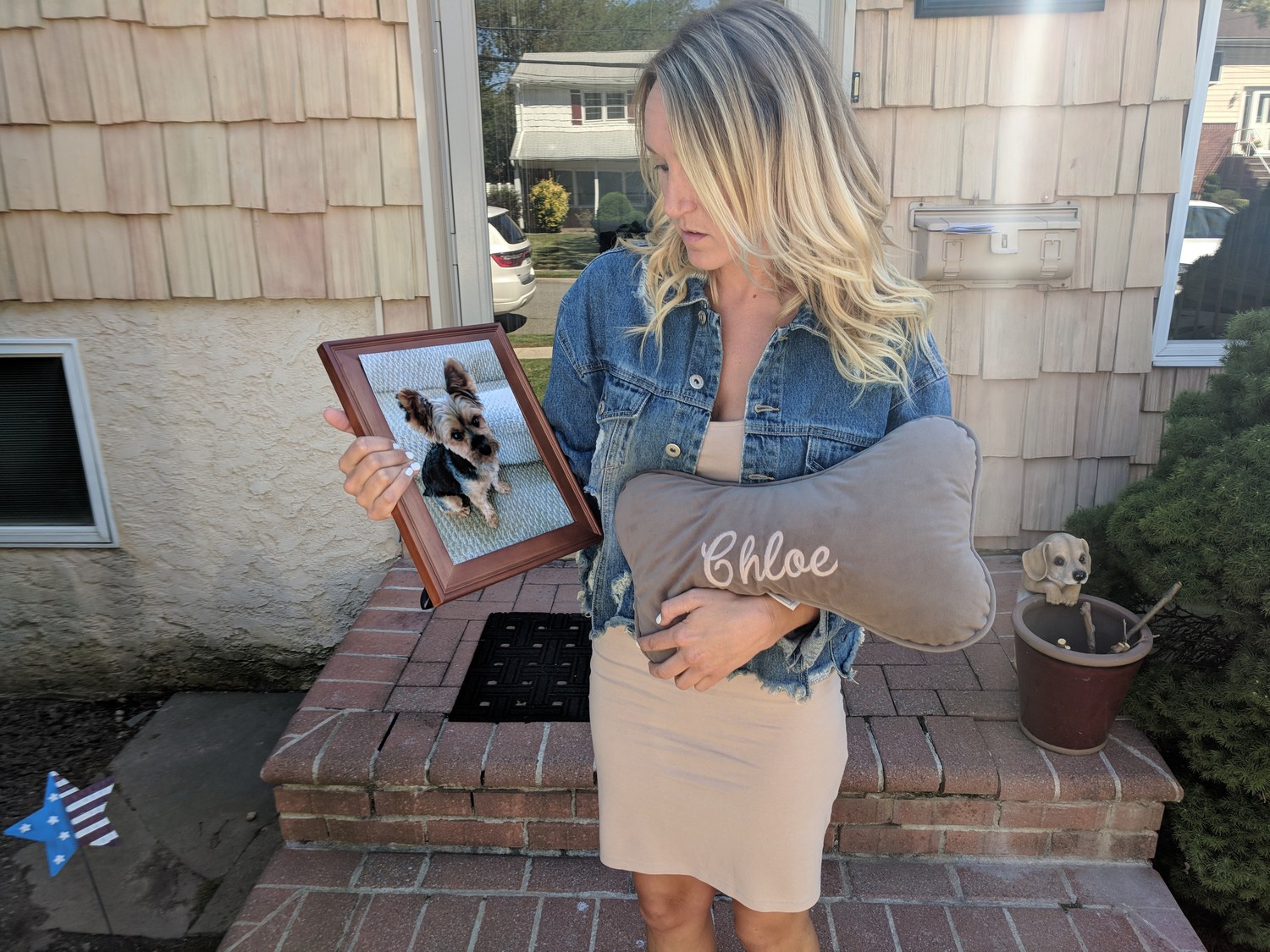 Chelsea Mann of Oceanside with a photo of her Yorkshire terrier, Chloe, who was allegedly mauled to death by her neighbor’s pit bull two weeks ago, along with Chloe’s favorite pillow.
Matthew D’Onofrio/Herald 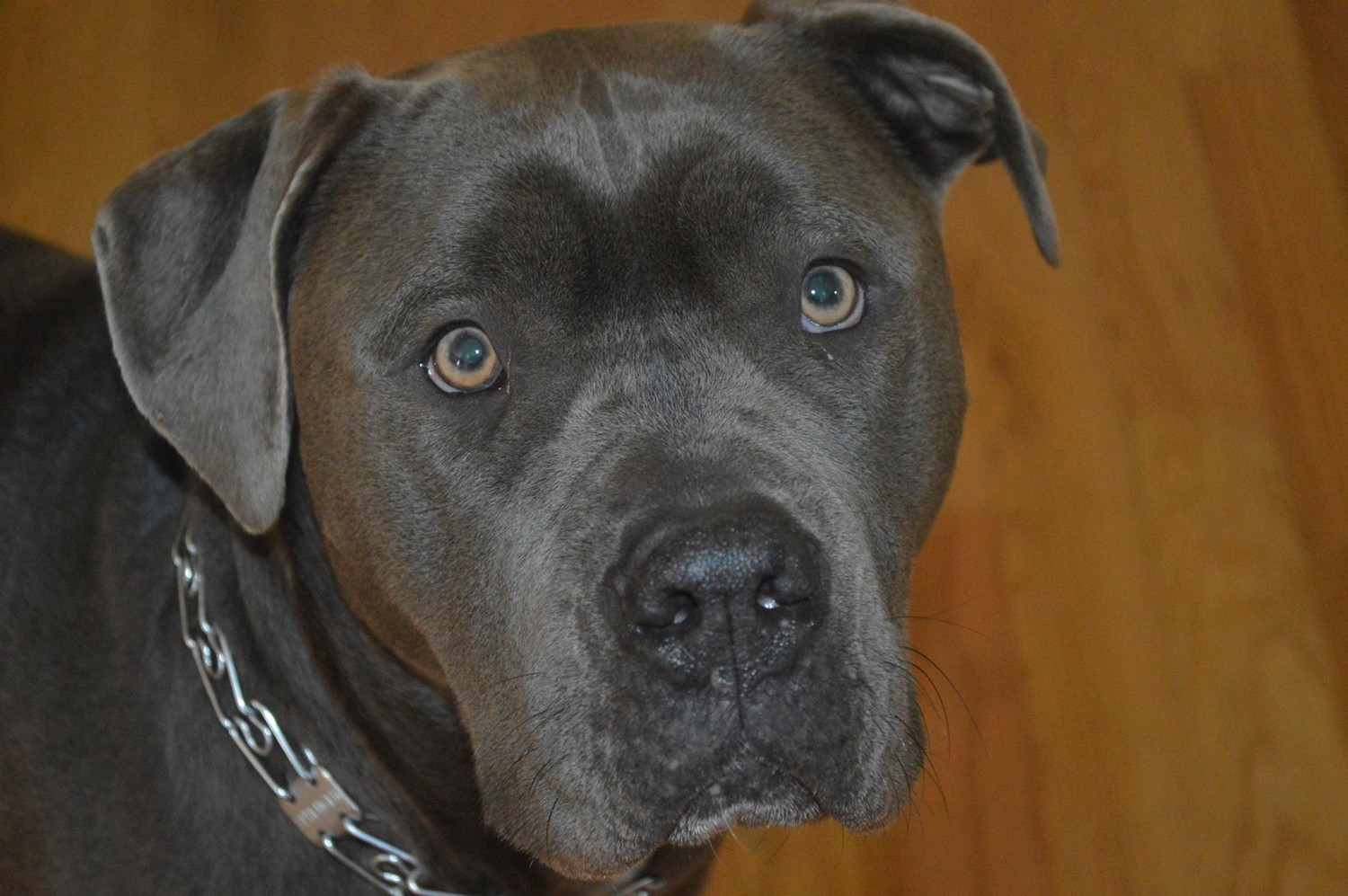 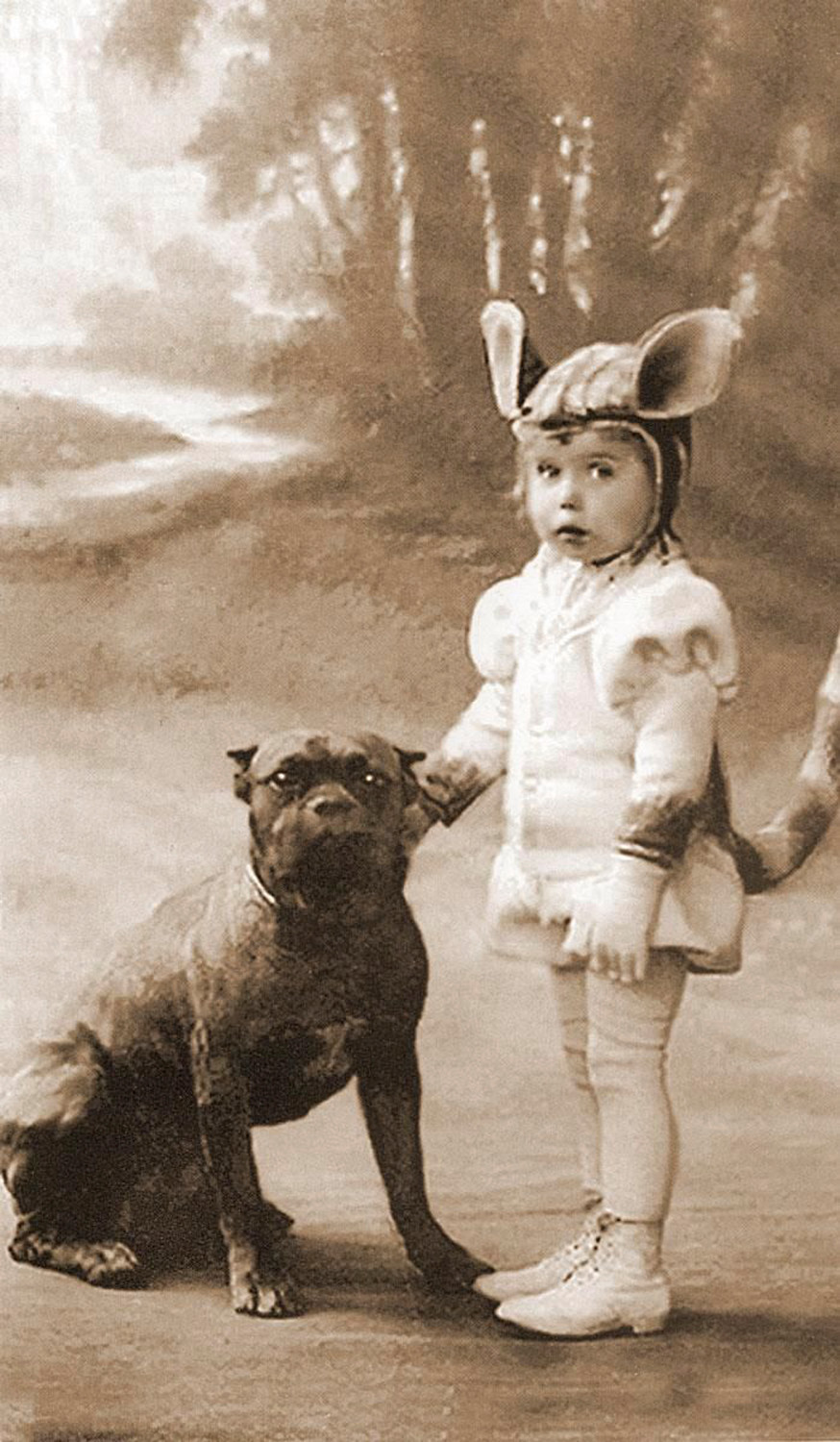 Dog experts have noted that at the turn of the 20th century, pit bulls were regarded as “nanny dogs,” ideal for guarding young children.
Courtesy Yonah Ward Grossman
Previous Next
Pit bulls in the U.S.

•A 2017 study of 12 separate fatal bite attacks revealed that roughly half of the breeds involved were misidentified as pit bulls.

•There were six rescued dogs that caused bite fatalities in 2017 and five were pit bulls, one which killed someone within hours of adoption.

•Of the 29 deaths accounted for by pit bulls, 18 involved killing a family member.

•All of the five fatal dog maulings in 2017 where the dog’s owner had a visitor or temporary houseguest were accounted for by pit bulls.

In Oceanside over the past two weeks, pit bulls reportedly killed a small dog and attacked an 11-month-old baby in two separate incidences, splitting community opinion and reigniting a nationally discussed topic: whether the breed poses a danger.

Resident Kathy Mann was walking Chloe, her daughter Chelsea’s 4-year-old Yorkshire Terrier, along Knight Street on the evening of July 13 when they encountered her neighbor and her 7-year-old pit bull, Sasha. After seeing Chloe, Kathy said, Sasha barked and grew agitated, causing the neighbor to drop the leash. Kathy said Sasha then rushed them, and “basically slaughtered [Chloe] right in front of me,” and bit her finger as she tried to intervene. Chloe later died from her injuries at a nearby animal hospital.

“I lost my best friend,” Chelsea said. “The owners need to be held accountable.” When she approached Sasha’s owner, she said, he said, “They’re animals, and these things happen.” He did not offer to pay for Chloe’s medical expenses. “It’s not about the money,” Chelsea maintained. “It’s about respect, and sympathy.” Sasha’s owner could not be reached for comment.

Neighbors who gathered at Chelsea’s house after the attack said that this was not the first time Sasha had bitten neighborhood pets, citing two past dog attacks that occurred nearby. Chelsea said she thinks Sasha is an “aggressive” breed of dog. Her neighbors have refused to have Sasha euthanized.

“We don’t take the dog … not until there is an order from the court,” said Rebecca Sinclair, deputy chief of staff for the Town of Hempstead. The town Animal Control Department has petitioned Nassau County for a “dangerous dog proceeding,” for Sasha, which labels the animal as “dangerous to society,” according to spokesman Michael Fricchione. If accepted, Sasha will be taken and euthanized.

Sometimes, after such an incident, the owner relinquishes their dog. A family pit bull bit their 11-month-old daughter in the head on the night of July 17 at their home on Lands Place, requiring an airlift to a nearby hospital, according to Nassau County police. A police spokeswoman said the baby had suffered “non-life threatening injuries.”

The family who owned the dog “willingly surrendered” it to animal control, according to Fricchione, and the Town “humanely euthanized” the dog the next morning.

“People need to wake up … these are not family-oriented dogs,” said resident Jamie Stern, the Manns’ neighbor who drove Kathy and Chloe — who was “covered in blood” — to the hospital. He added that Sasha is known in the neighborhood as “the killer pit.”

‘Setting them up for failure’

While the Manns and some of their neighbors have become distrustful of pit bulls, many dog experts say that there is a great deal of misinformation out there about the breed.

“There are no such things as pit bulls,” according to state-licensed dog behaviorist and trainer Brandon Karp, owner of South Shore K9 Academy, He said what people typically refer to as pit bulls are actually “bully breeds,” which are mixes of breeds such as American pit bull terrier and bulldog, mastiffs and boxers, and more.

Karp noted that American pit bull terriers, “the actual pit bulls,” were originally used for hunting and brought inside the home for use as “nanny dogs,” intended to guard babies and young children.

“Dogs are not aggressive creatures, they are reactive … like humans,” Karp explained. He said that not training a dog is like not properly parenting a child, “You’re setting them up for failure,” he said.

Karp, who teaches Dog-Smart Kids classes across schools in New York state, concluded that “lack of education and information” causes situations such as the one with Sasha and Chloe.

“It’s easy for people to make it about the breed,” said Oceanside resident Gilat Nahum, who has two small dogs and is a neighbor and friend of the Mann family. She said that she believes that many factors, such as proper socialization, supervision, proper training, quality of ownership and underlying medical condition, determine the likelihood of a dog attacking someone or something.

Nahum said she sympathized with what happened to Chloe and the Manns, adding that it was “tragic,” and that the owners of Sasha should muzzle her, “so we don’t have to walk our dogs in fear carrying mace and baseball bats.

“That’s the least they can do to ensure all are safe in the neighborhood,” she continued. “Humans and dogs.”