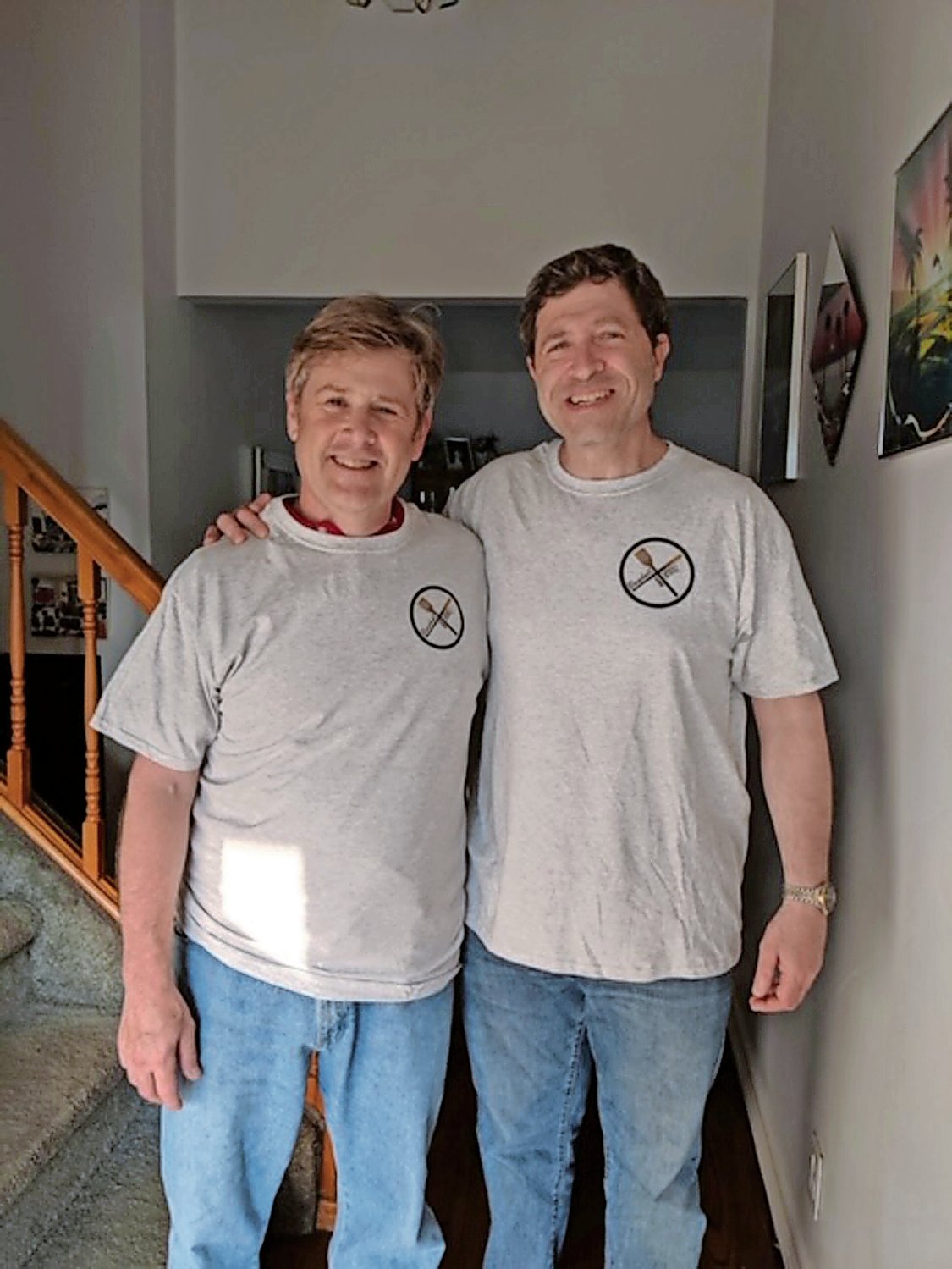 Jeff Cohen, 58, of Wantagh, left, and Leonard Aberman, 54, of Bellmore, started their podcast in December 2017.
Courtesy Baseball and BBQ

We just picked two topics that we really enjoyed and wanted to talk about.”
Leonard Aberman Co-host
By J.D. Freda

Every week, Jeff Cohen, 58, of Wantagh, and Leonard Aberman, 54, of Bellmore, flip on their microphones to record their podcast “Baseball and BBQ.” Cohen opens his decade-old laptop and launches Audacity, a free application, to record his and Aberman’s audio, and edits the sound with it days later. Cohen may sometimes splice an interview or two into the original audio.

Episodes are released biweekly. There is no mixing board, no producer and no professional studio — only Cohen and Aberman, recording for the love of it.

“We run a very rudimentary operation,” Cohen said. “We use generic, inexpensive microphones, use Audacity, which I had to kind of learn along the way, and we plan around the schedule of the person we’re talking to on the podcast.”

Cohen’s and Aberman’s rapport with each other and their guests is apparent. The pair verbally jab at each other and feed off each other’s energy. Topics flow naturally from baseball to nuanced conversations about . . . barbecue.

Even off-air, the two seem to have a unique connection. You might think they were childhood friends, but they weren’t. Cohen and Aberman both grew up in Bayside, Queens, but they met only 15 years ago.

“I kind of got involved in Cub Scouts [Pack 189] when the parents who were running it were leaving be-cause their children had aged into the Boy Scouts,” Aberman said. “I had about a year of training before Jeff joined — well, really, we recruited him. We ran it for 10 years, and I really wouldn’t have done it without him.”

The two bonded over their love of baseball, specifically the New York Mets. Cohen works in sales, and Aberman is in marketing. “We’re two working stiffs,” Aberman joked. “We were always talking about baseball and baseball history, and we thought, ‘Hey, we’re the only two schmucks in the world without a podcast, so why not do one?’” In December 2017, they released their first episode of “Baseball and BBQ.”

Since then, they have produced 53 more episodes, the most recent one on Feb. 22. For it, the two spoke with Tanner Jones, a baseball card-collecting hobbyist. Jones detailed his interest in collecting cards as the co-hosts steered the conversation with fun observations and thoughtful questions. Next, Gary McDonald, of “The Baseball Talk Radio Show,” joined Cohen and Aberman. McDonald’s voice is featured in an introduction to Baseball and BBQ. Finally, Cohen and Aberman discussed the book “Smoked,” by Ed Randolph.

Baseball has continued to play a large role in the show’s identity, but a fascination with barbecue has become just as integral. “We have done a barbecue tour of local restaurants, including Smok-Haus in Garden City, John Brown’s Smokehouse in Long Island City and restaurants in Brooklyn,” Cohen said. “[Len] was really the one to get me more into the world of barbecue. He taught me a lot.” They intend to continue visiting local barbecue eateries, they said.

Cohen and Aberman have traveled beyond New York to explore the wide-reaching world of barbecue. “We do road trips to talk to different kinds of people,” Aberman said. “We went to a barbecue expo in Atlantic City and met a bunch of people in that world. We’re still friendly with a lot of them today.”

The pair has also visited many locations to learn more about baseball. They have visited Citizens Bank Park in Philadelphia and Fenway Park in Boston, where they toured the field before a Red Sox game. Cohen added that he wanted to record somewhere in Cooperstown, home of the Baseball Hall of Fame.

Cohen and Aberman also enjoy baseball history, and told the story of John Montgomery Ward, who played around the turn of the 20th century and was inducted into the Hall of Fame posthumously. During research for possible podcast topics, the co-hosts found that Ward was buried in Uniondale.

“We went to visit his grave and were kind of shocked to find that it was so close by,” Aberman said. “There was no indication that a Hall of Famer was buried there. You could only barely see his name, so talking about something like that on the podcast, we think, is important.”

Aberman said that he and Cohen want to visit Kansas City, where they could profile the Negro League Hall of Fame. “I heard they also have some pretty good barbecue there,” Aberman added.

For those who search the internet for “top barbecue podcasts,” Cohen said, “Baseball and BBQ” usually appears. He thinks that may be because there simply aren’t many podcasts in that category, making it one of the medium’s more unique podcasts. That was accidental, according to Aberman. “I wish I could say we had this great plan to break into this untapped market,” he said, “but we didn’t. We just picked two topics that we really enjoyed and wanted to talk about.”

Breaking into the top 100 baseball podcasts has proven more challenging. Cohen and Aberman believe they can achieve that feat in time, though. They have devoted a lot of free time to the venture, according to Aberman, and they want to see it continue to grow.

“We have a list of people we want to talk to and places we’d like to go, but to do a lot of the bigger things we’d like to, we’d need a budget,” Aberman said. “If there was any type of grant we could apply for to get better equipment, we’d like to do that. Eventually, maybe to get the podcast on a radio network would be a goal of ours. We just want to reach a bigger audience.”

In the meantime, Cohen said that he and Aberman are comfortable producing the podcast for the sheer enjoyment of it, and to give those with insightful stories a platform.

“I think the charm of it is that we’re not professionals,” Cohen said. “At the snap of a finger, a guy like Pete Rose could have five reporters come and ask him questions. Although we’d love to talk to a guy like that, we really enjoy speaking to maybe some of those lesser-known guys who have these great stories to tell.”