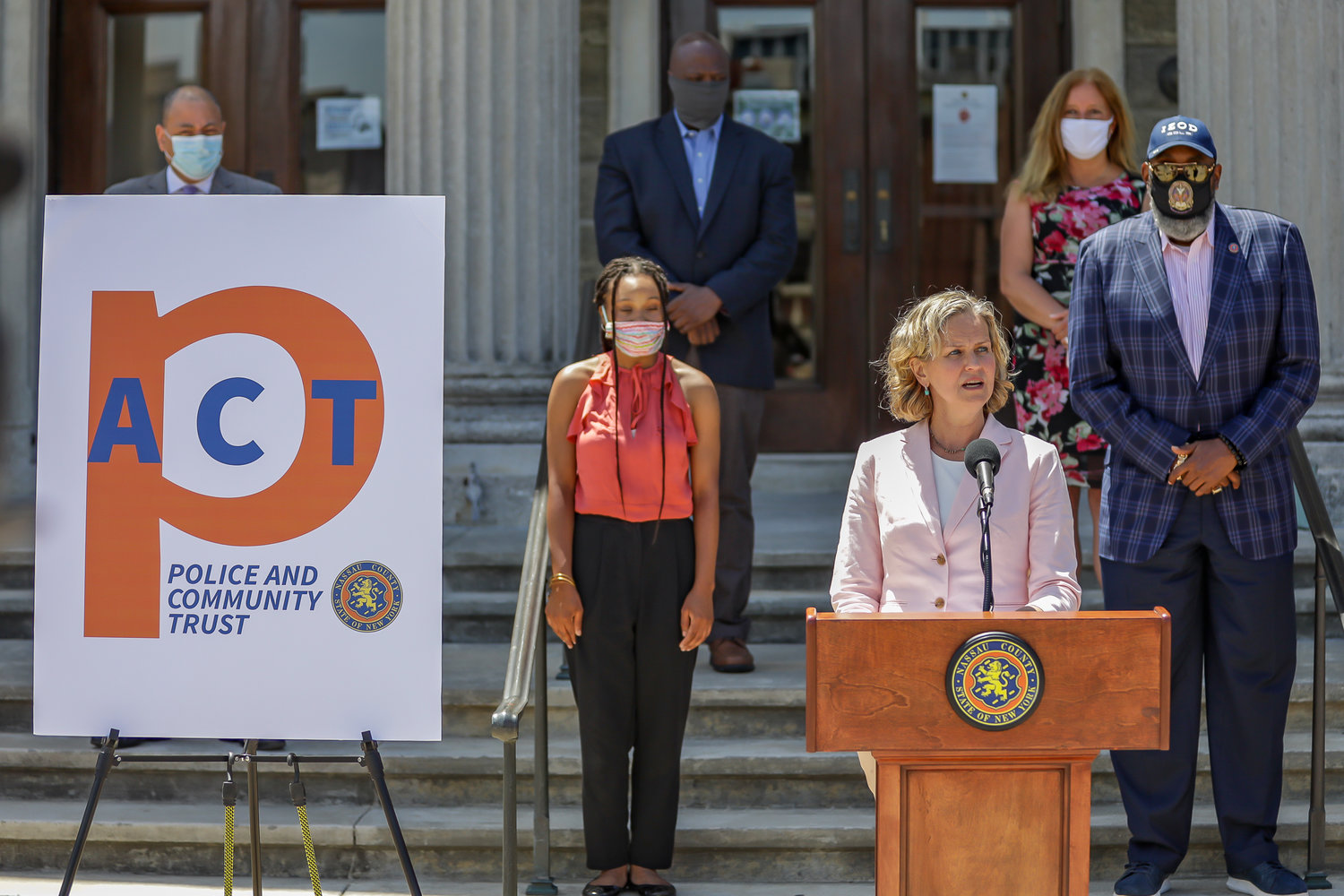 A new Nassau County initiative aiming to foster a dialogue between police and community activists has gained the support of local leaders in its early stages.

The Police and Community Trust, or PACT, which was announced by Nassau County Executive Laura Curran on June 17, follows weeks of Black Lives Matter protests on Long Island and a renewed conversation about racism in America after the killing of George Floyd in Minneapolis in late May. In interviews, lawmakers and community activists said the initiative is a positive first step toward addressing issues related to policing in the county.

Travis Nelson, 21, a student and community activist from Hempstead who is a member of PACT, said the committee held its first meeting on June 24 and plans to meet at least twice a month. Nelson said that government officials and police leaders expressed a willingness to listen to and understand activists in the initial meeting, but he also acknowledged a “tough road ahead” to achieving true reforms.

“We’re going to have to push our elected officials to think in a way that they haven’t thought before, and I think that’s a good thing,” Nelson said, “but it’s going to cause them to think about things in a way that may make them uncomfortable. Because the first thing that I noted is in order for us to make any type of change, in order for the committee to be successful in any way, we had to first agree that there is a problem.”

Nelson is one of 12 members of the trust, which includes County Police Commissioner Patrick Ryder and is co-chaired by Curran and South Floral Park Mayor Geoffrey Prime.

County Legislator Josh Lafazan, an independent from Woodbury, said the committee is “well-served and well-constituted” at a time when the national conversation about institutional racism is being mirrored at the local level. Lafazan added that he believed the committee’s discussions would be productive, and he urged his colleagues in the Legislature to listen to the voices of activists.

“At the end of the day, this Legislature, which has often been plagued by partisanship for decades, has to put politics aside and do what’s right,” Lafazan said. “So I hope that all 19 members of the Legislature are willing to listen, and listen earnestly, to the voices of the members of this committee.”

In separate statements, leaders of both parties in the Legislature expressed support for a dialogue with community stakeholders, but remained vague in assessing what specific changes might result from the trust.

Richard Nicolello, the Legislature’s presiding officer, a Republican who represents the 9th District, said his caucus would look to work with the community, the police unions and Ryder to explore new ways in which to enhance safety for everyone in Nassau County. Meanwhile, Kevan Abrahams, the Legislature’s minority leader, a Democrat from the 1st District, said he hoped that PACT would lead to structural reforms by “channeling the energy and passion of a new generation of activists.”

Jason Samel, 43, of Old Brookville, organized a Black Lives Matter protest in Glen Cove in early June with five North Shore activists, who were all under age 24. Samel said the high turnout of over 3,000 people was unthinkable, and represented a desire to see change in Nassau County.

Looking for solutions, Samel said that in Glen Cove specifically, he hopes the protests will lead to a Police Department that more closely reflects the demographics of the community. In Nassau County as a whole, he said, an important step in addressing systemic racism would be an expanded curriculum on black history in schools.

Samel also noted that he’d like to see police budgets, including the Nassau County Police Department’s, include many more mental health professionals on the streets.

State Assemblyman Michael Montesano, a former NYPD detective and a Republican who represents the Assembly’s 15th District, agreed. Police, Montesano said, have been overburdened in dealing with a variety of issues, including mental health. But he maintained that police budgets should still reflect what is needed to operate in a given community, and said that spending on mental health services should not be punitive for one organization or another.

Montesano called the PACT initiative an excellent idea, and said there was always room for improvement as police revisit policies and implementing new ones where necessary.

But Nelson said that for community activists, true change will only come to Nassau County with a “reforming of the mind” for those in the community regarding the way black people are treated. Nelson said that, moving forward, he hoped to see continual accountability from the community with regard to PACT, and hopes others around the county will provide the committee with input.

“If you feel as if something is not being said, or the people who are part of this initiative, you’d like to speak with them so that your voices are heard, then I welcome that,” Nelson said. “Because me being in this space, I’m not a monolithic voice for everyone across Nassau County. And so I think for everybody who is a part of that committee, what we should continue to strive to do is be as nuanced and objective with our opinions, with our perspectives, as possible, by drawing from data, not just only our set personal experiences and our cultural backgrounds, so that we are attacking the issue at hand.”