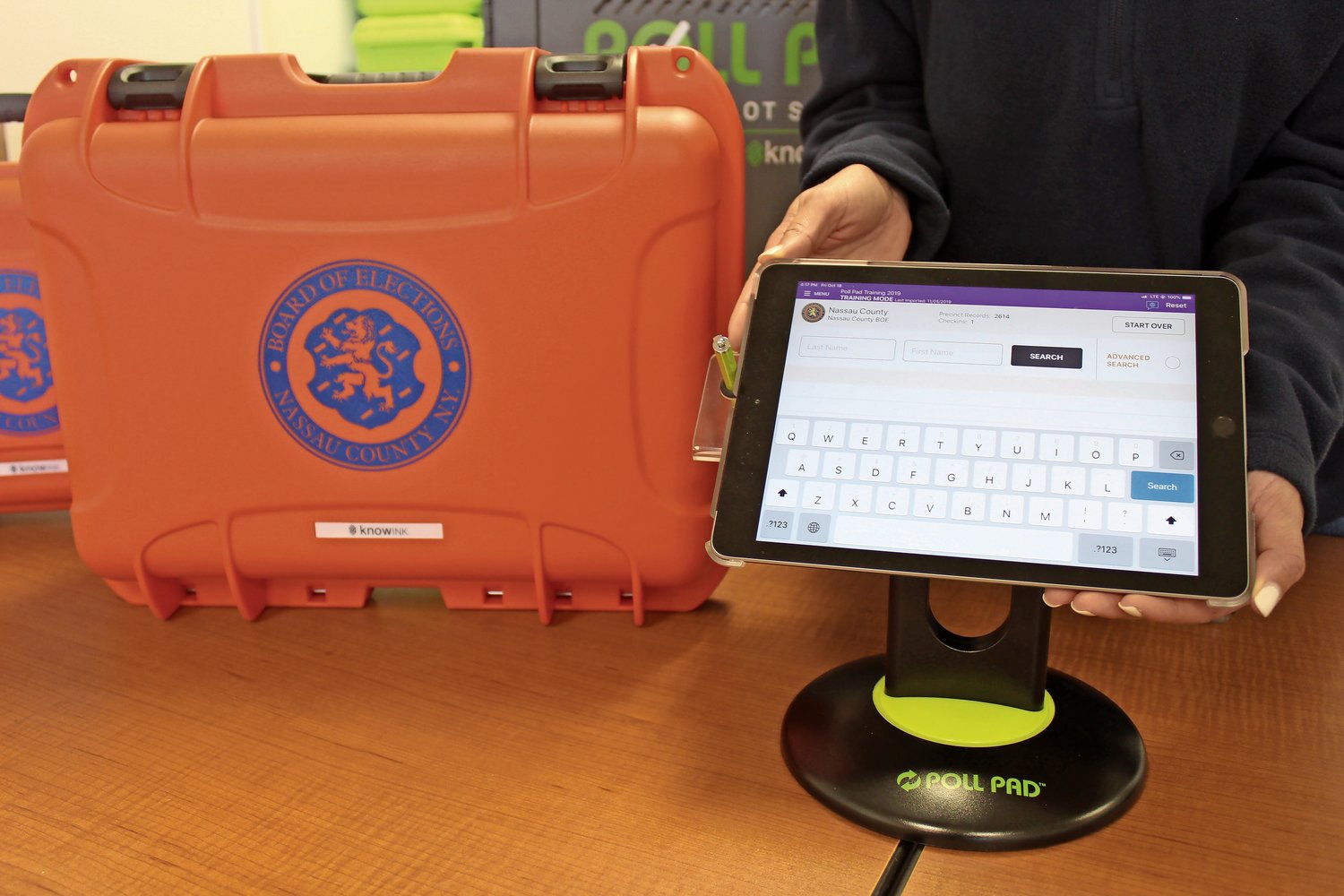 Instead of signing a physical poll book, voters will verify their identity using electronic poll pads. The Nassau County Board of Elections has trained its poll inspectors to use the new technology.
Alyssa Seidman/Herald Life 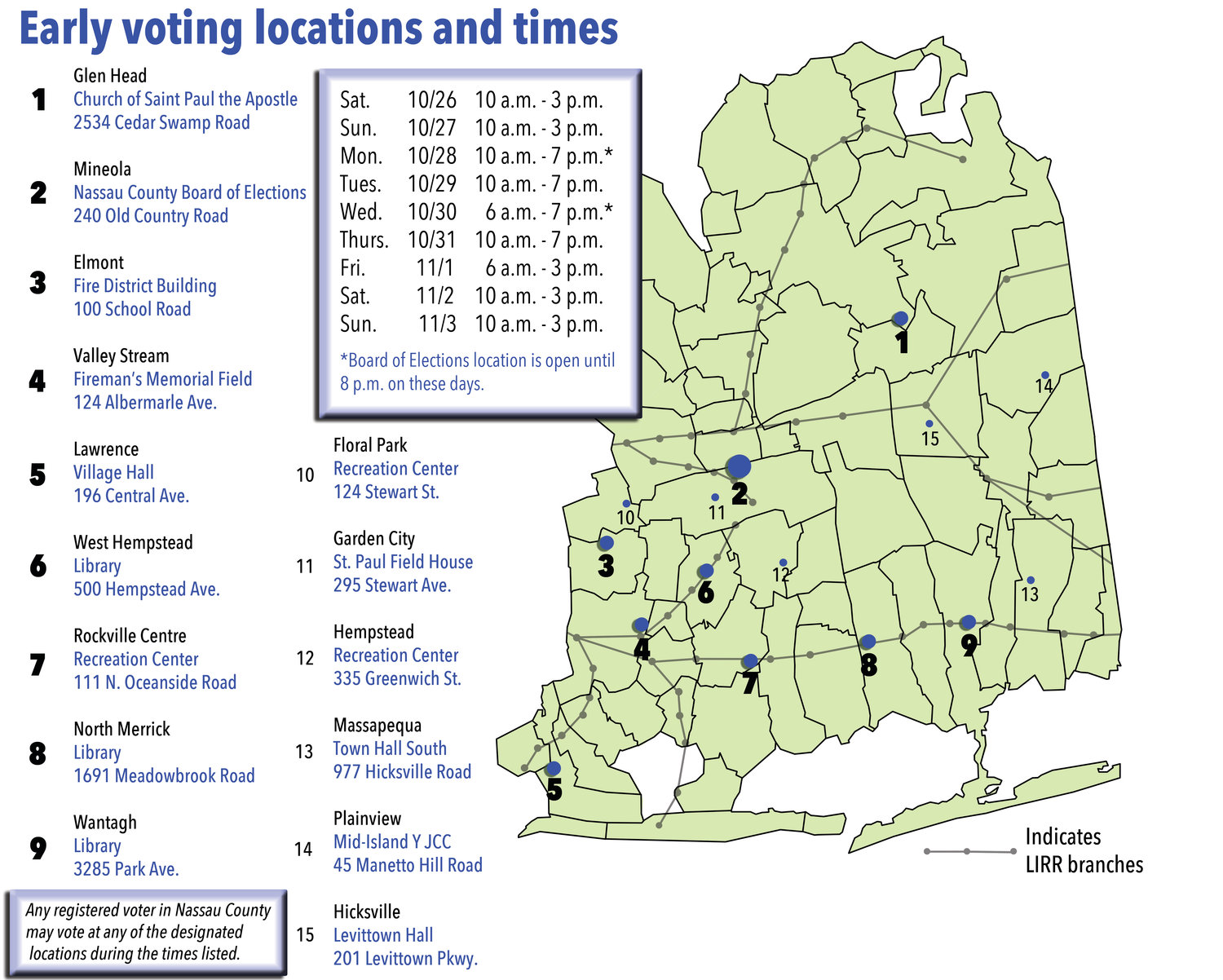 Starting Saturday, Nassau County residents can head to one of 15 polling sites to cast their votes in the Nov. 5 election during a nine-day early-voting period — the first in the state’s history. The process is part of a series of reforms passed by the State Legislature in January, intended to make voting easier for people who struggle to get to the polls on Election Day.

Earlier this year, the Nassau County Board of Elections announced the locations of the polling places (see map, Page 2), whose number is more than double the state requirement of seven. The nine-day schedule offers 69 hours of early voting — 60 are required — including evenings and weekends. Residents can vote at any of the sites from Oct. 26 to Nov. 3, but if they choose not to they must vote at their regular polling place on Election Day.

The Herald visited the Board of Elections in Mineola to get a look at the new technology voters can expect at the polls.

Residents will verify their voter registration on iPads, or electronic poll books, which will replace physical poll books at each early-voting site and regular polling places. Using a stylus, poll inspectors will assist voters in signing their names and confirm their identities. Once their signatures are approved, the poll inspector will print ballots from a ballot-on-demand printer.

“This printer is specific to early voting,” said Essma Benkhoukha, chief clerk at the Board of Elections. “It has the ability for any ballot to be printed automatically so as to not pigeonhole voters to certain locations.”

There are 56 different ballot styles this election cycle, Scheuerman said, but with ballot-on-demand printers, residents will be able to get their respective ballots at any early-voting site. For example, if a Glen Cove resident wants to vote at a site in the Town of Hempstead, he or she can still vote for the candidates running for Glen Cove City Council and Oyster Bay Town Board seats.

“No matter where you go, you’re getting your ballot,” Scheuerman said.

The commissioner also said that if residents submit their ballots during the early-voting period, it precludes them from voting on Election Day. “The poll pads sync up,” he said, “so after you vote, other poll books around the county, within one minute, will know that you voted to guard against double voting.”

Benkhoukha and her staff have spent the past few weeks training poll inspectors to use the poll iPads, and while the technology may be new to the county’s voting process, she emphasized that signing in on the iPads would be easy and “user-friendly” for residents.

“We’re excited to implement this program and see how it will change the atmosphere of voting,” Benkhoukha said.

The North Merrick Public Library, at 1691 Meadowbrook Road, is one of the county’s early voting locations. Library Director Tom Witt said he was excited that the library was selected, adding that its central location, accessibility to the Southern State Parkway and ample parking make it an ideal polling site.

Witt said that early voters would cast their ballots in the Len Kirsch Meeting Room. To ward off unexpected technical issues, library staffers Chris Jelley, head of technology, and Rick Castellon, a building maintenance employee, will be on hand to keep the process running efficiently.

Witt published a notice in the library’s October newsletter and on its website to inform the public about early voting. And, as is tradition on Election Day, the library will hang its “Vote Today” banner on the front of the building beginning on Saturday.

“We have 10 years of working with the Board of Elections behind us, and we’re going to do our best to make it go smoothly on our end,” Witt said. “We want this to succeed.”

Where to vote (early) in Nassau County