Hurricane season is here — even for Long Island 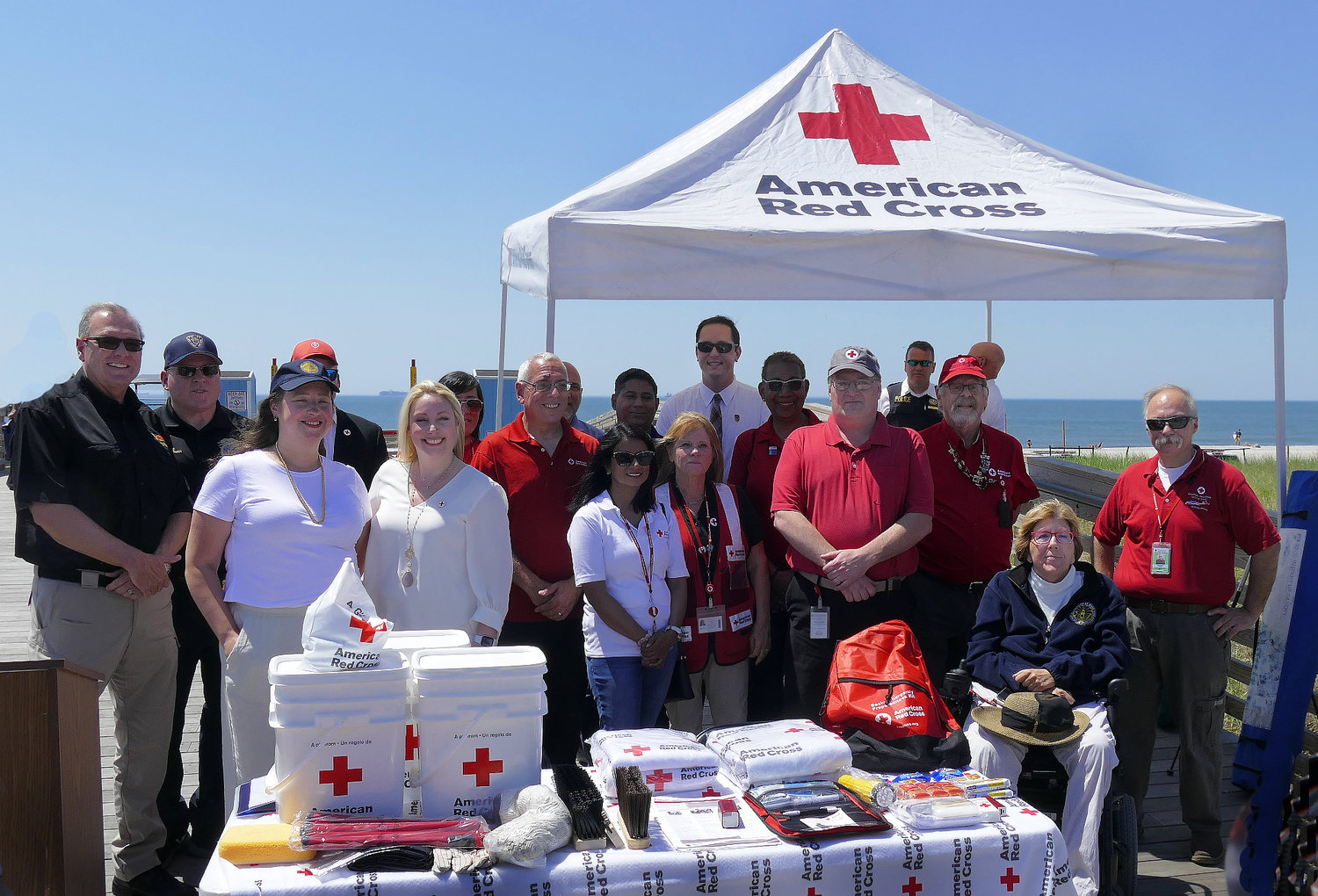 Members of American Red Cross were joined by local officials for a hurricane-preparedness news conference in Long Beach.
Joe Abate/Herald 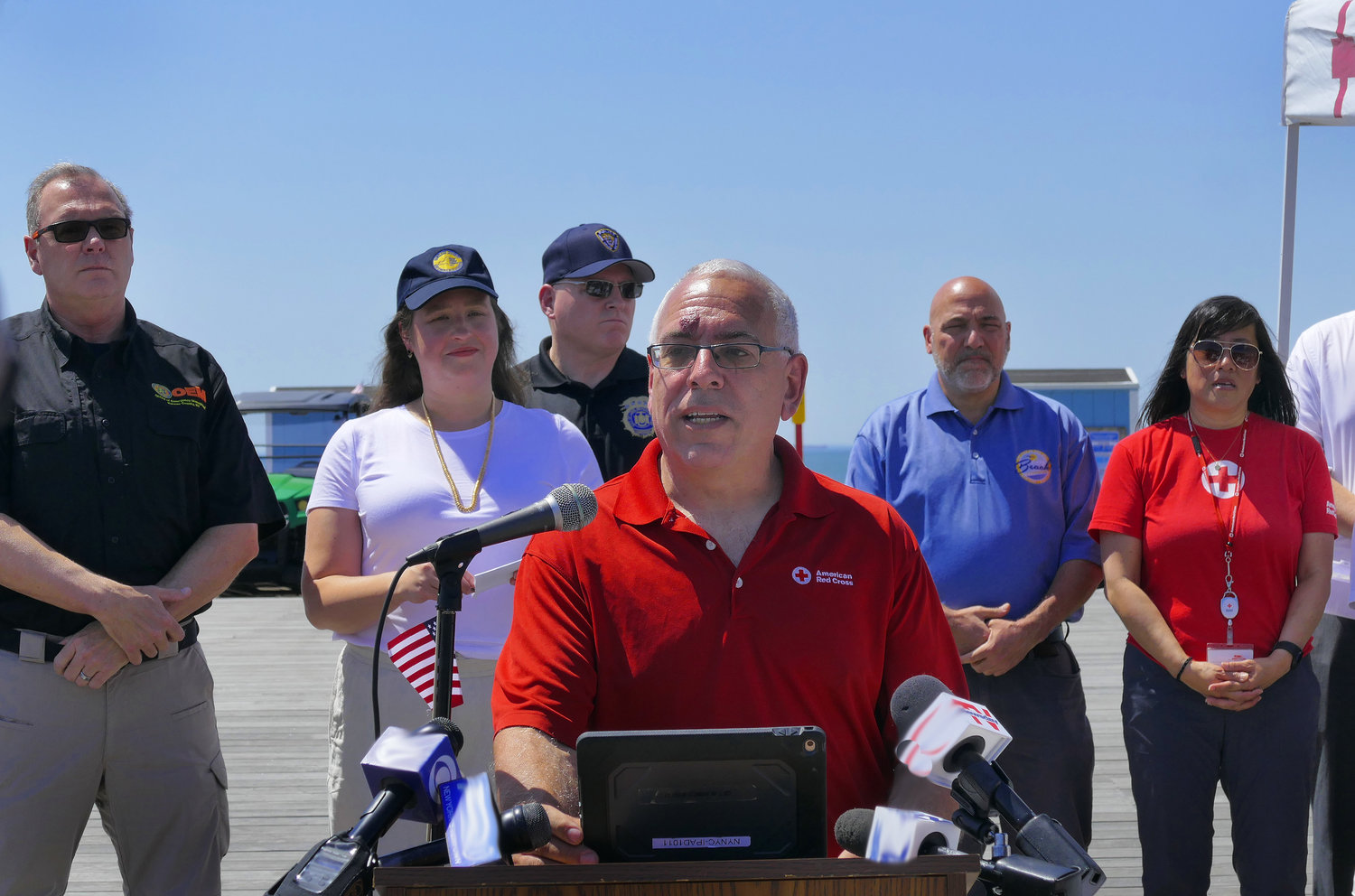 Joe Spaccarelli, the director of American Red Cross on Long Island, addressed the gathering about preparing for the hurricane season.
Joe Abate/Herald
Previous Next

It takes just one storm to seriously disrupt and devastate our communities.”
Stacey Sweet, Board member, American Red Cross
By Brendan Carpenter

It may not seem so, but the hurricane season has already started. And it’s forecast to be quite a busy one.

In fact, expect as many as 21 named storms this season, according to the National Oceanic and Atmospheric Administration, indicating a higher-than-average number of storms that reach at least tropical storm strength this year. And it’s more than likely at least one of them could make their way to Long Island in some form or another.

The time to prepare is now, according to the American Red Cross, who joined local and county officials on the Long Beach boardwalk last week — nearly a decade since Hurricane Sandy devasted the area.

“What an appropriate location to help get the message out about the importance of being prepared for hurricane season,” said Stacey Sweet, a Red Cross board member. “It takes just one storm to seriously disrupt and devastate our communities. The need to get our friends, families and neighbors ready has never been more important than it is right now.”

The Long Island chapter of the Red Cross has been doing its part to get ready, its director, Joe Spaccarelli, told reporters. That includes updated response plans developed with local first responders, as well as staff training and exercises, all while replenishing relief supplies across Long island.

But the best preparation starts at home, with people ensuring their friends, families and neighbors are prepared for major storms. Everyone should have an evacuation plan in case they need to leave or are separated from their families, Spaccarelli said, as well as an emergency kit and at least one gallon of water per person per day.

The kits, he added, should contain nonperishable food, a flashlight, a battery-powered radio, a first-aid kit, hygiene items, medications, a cellphone charger, extra cash, and copies of important papers.

It’s also imperative to stay up to date on weather-related orders from local officials, Spaccarelli said, which can be found in the Red Cross’ emergency smartphone app, which provides users with real-time weather alerts and tips.

“We certainly know here in this community that all it takes is one storm,” said Jackie Bray, commissioner of the state’s homeland security and emergency services division. “But we’re also seeing more frequent and more intense weather events, and particularly tropical weather.”

There were 21 named storms — with sustained winds of at least 39 mph — in the most recent hurricane season, which ended last November, making it the third-most active year on record, according to NOAA. Seven of them became hurricanes, four deemed major.

This year’s season is predicted to be much of the same.

“That means for us at the state, that we need to lean forward and do everything we can to have active, engaged, daily, robust work communications and preparedness planning with all of our localities and all of our counties,” Bray said.

And there are “three things to know” if a storm hits, she added. One is to know your risk — whether streets are flooded or if a storm surge will hit. Second is to make a plan, which should include a “go bag” with water and medications so no one is “scrambling for the items you need” when the storm hits.

When Sandy hit Long Island in October 2012, it was the strongest storm that season, moving President Barack Obama to declare a “major disaster” in the area. More than 13,000 U.S. flights were canceled, and power and transportation systems in New York state sustained damage upward of $18 billion.

While some might call Sandy a once-in-a-lifetime kind of storm, Long Beach city council vice president Liz Treston says the lessons we learned from that hurricane shouldn’t be forgotten as we prepare for 2022. She shared what she called the “four C’s” — “community, collaboration, cooperation and, most importantly, communication.”