Promoting religious coexistence in a time when it’s needed most 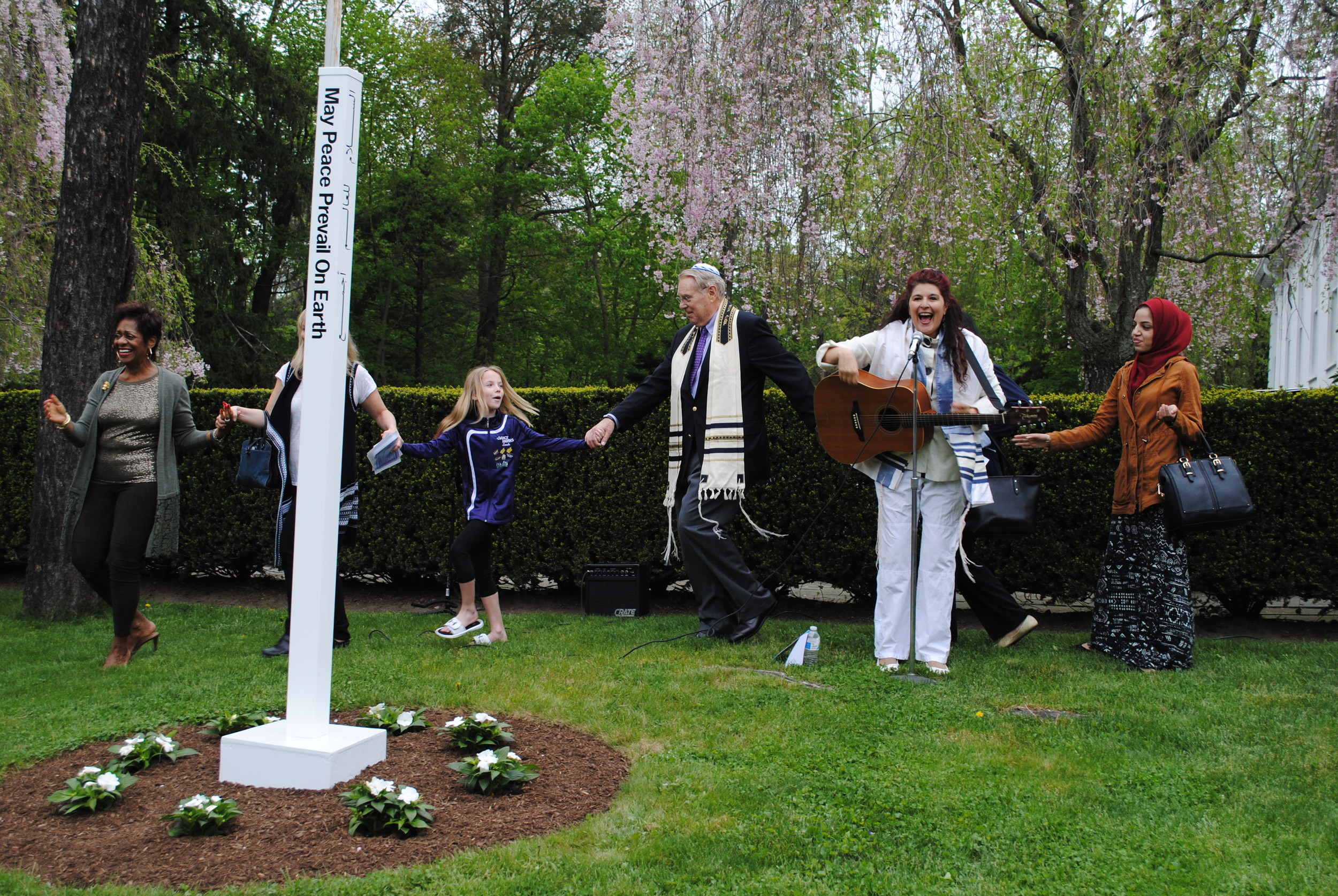 Amid the political, religious and racial divisions that plague the nation, all negativity was forgotten on a cool spring afternoon as an intimate group from the Brookville Multifaith Campus gathered on the front lawn surrounding a post that had recently been planted in the ground.

The post is the campus’s new Peace Pole — a white, four-sided pillar that stands about eight feet tall in a bed of newly planted flowers. It reads “May Peace Prevail On Earth” in four languages. On April 30, the church held a dedication ceremony for the pole, followed by a short prayer service and reception.

The Peace Pole Project was founded in 1975 in Japan, and The World Peace Prayer Society in Wassaic, N.Y., creates the poles. They are international symbols that stand in noteworthy locations all over the world promoting a silent message of peace.

The words “May Peace Prevail On Earth” are written on every Peace Pole in the language of the country where it stands, along with at least three other languages. Prominent Peace Pole locations include Allenby Bridge, between Israel and Jordan; the Peace Park in Salt Lake City, where 84 Peace Poles commemorate the Winter Olympics; the War Museum in Vietnam; Robben Island in South Africa, where Nelson Mandela was imprisoned; the Pyramids at El Giza in Egypt; and the site of the baptism of Jesus at Bethany-Beyond-the-Jordan.

There is perhaps no better place than the Multifaith Campus — the only one on Long Island — for a Peace Pole to stand to convey a message of harmony in the languages of the faiths that coexist there: Dutch, to reflect the church’s 285-year history with the Protestant Reformed Church; Hebrew, to represent the Jewish community; and Arabic, to reflect the Muslim community.

The church was founded as a Dutch Reformed Church in 1732, but has hosted other faith groups on its property for several decades. It currently houses three Abrahamic faiths — the Brookville Church (Christianity), the New Synagogue of Long Island (Judaism) and the Muslim Reform Movement Organization (Islam). The church also hosts the Interfaith Community, which provides education in both the Christian and Jewish faiths for families that want to support both religious heritages.

During the ceremony, Rev. Vicky Eastland spoke about the history of the church, the history of the Peace Pole and the work the interfaith community is doing. The leaders of each sector of the campus read aloud the messages on the pole in their respective languages.

Following the dedication, Jewish cantor Irene Failenbogen played her acoustic guitar and sang, while the group danced the Hora around the pole. After, campus-member Khalid Lateef recited the Adhan, a Muslim call to prayer.

Before coming to Brookville, Eastland served at a reform church in upstate New York, and helped form an interfaith group there. When she moved to the Brookville Church four years ago, she described the groups in the church as more renters from a landlord than an interwoven community. One of her goals was to change that, and now the groups hold shared events and interact on a regular basis.

While some may call interfaith work progressive, it’s more simply just about respect. Eastland said that one of the biggest challenges the church has faced is the misconception about its mission. “There have been several people that have said they thought we were melding the religions together and kind of creating a new religion, and that’s not what we’re doing,” Eastland said.

Dr. Sultan Abdulhameed, the leader of The Muslim Reform Movement Organization on the Brookville Campus, said the pole is “a perfect symbol for our multifaith campus. I hope that people who see it will recognize what it stands for and come in,” he said.

“I think it’s great because it shows the world outside what we are,” Brookville Church Deacon Lisa Denison said of the Peace Pole. “I love that the Peace Pole is in the front, on the road, and people will see it and maybe drive by, and maybe it will be of interest to them.”

Denison, who has been a member of the church for almost 30 years, was inspired to become a deacon three years ago to give back to the place that has been a part of her life and helped her family for years. Her family is a perfect example of the interfaith community at work: She practices Christianity, while her husband is an atheist, and together they come to the church to interact with members from all the faiths.

And a visit to Brookville’s Multifaith Campus may be just what one needs to experience peace, which they can enjoy with people of different faiths.

“One very wonderful thing that I enjoy being here, is that there are Christian, Jewish and Muslim events out here, and everyone is welcome to join any of these services,” Abdulhameed added. “If you visit here you will experience a great feeling of harmony.”

For more information about Brookville’s Multifaith Campus, go to http://churches.rca.org/brookville/.