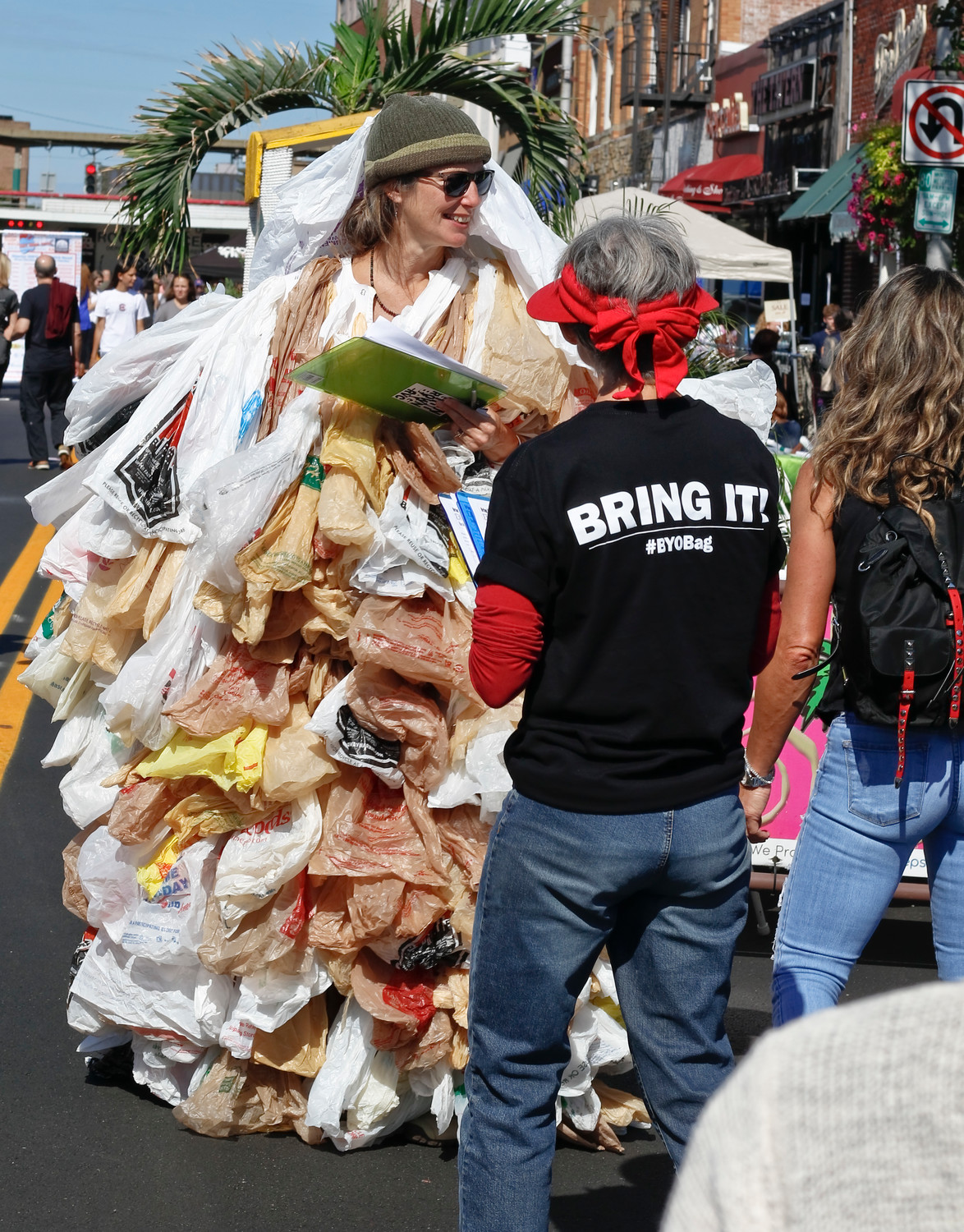 Susan Brockmann, also know as the “Bag Lady,” asked festival-goers in Rockville Centre on Sept. 30 to sign a petition urging the village to create a reusable bag ordinance.
Christina Daly/Herald
By Ben Strack

Rockville Centre residents and others from neighboring communities showed support for the push to eliminate single-use plastic bag pollution during the Eat Shop Rock street festival on Sept. 30.

All Our Energy, a Point Lookout-based group that strives to educate and empower the public to support renewable energy and act on environmental issues, led the charge.

More than 1000 people signed the organization’s pledge to bring their own reusable bag and to tell the village of Rockville Centre that they would support a reusable bag initiative to eliminate single-use checkout bag pollution. The group has said that nearly 12.3 million plastic bags are used annually in Rockville Centre alone and less than 5 percent get recycled, according to conservative Environmental Protection Agency estimates.

“The board is waiting for the state to put out a statewide law,” Rockville Centre village spokeswoman Julie Scully told the Herald in May.

The display of public support was part of a larger movement that has been brewing over the last year. “Bag It,” a film released in 2010 that documents the impact of plastic bags and other plastic consumer materials on land ecosystems and the marine environment, has been shown around the village to raise awareness of the issue.

All Our Energy also debuted “Bring Your Own Bag RVC” eco-friendly, recycled cotton canvas bags at Eat Shop Rock. You can get one with a $12 donation and two with a $20 donation.

George Povall, executive director of All Our Energy, said the group knew from speaking to community members and local businesses that support for curbing single-use plastic bag use was apparent in the village, but that they were waiting for their chance to meet many people at once to raise this issue.

“It’s just a matter of quantifying the support. We see it’s there,” he said. “People needed some questions answered, and when they got them answered they were right on board, because people get it. It’s just not necessary to be given a bag at check-out for 99 percent of things.”