Rabbi Shimon Kramer is Merrick's Person of the Year 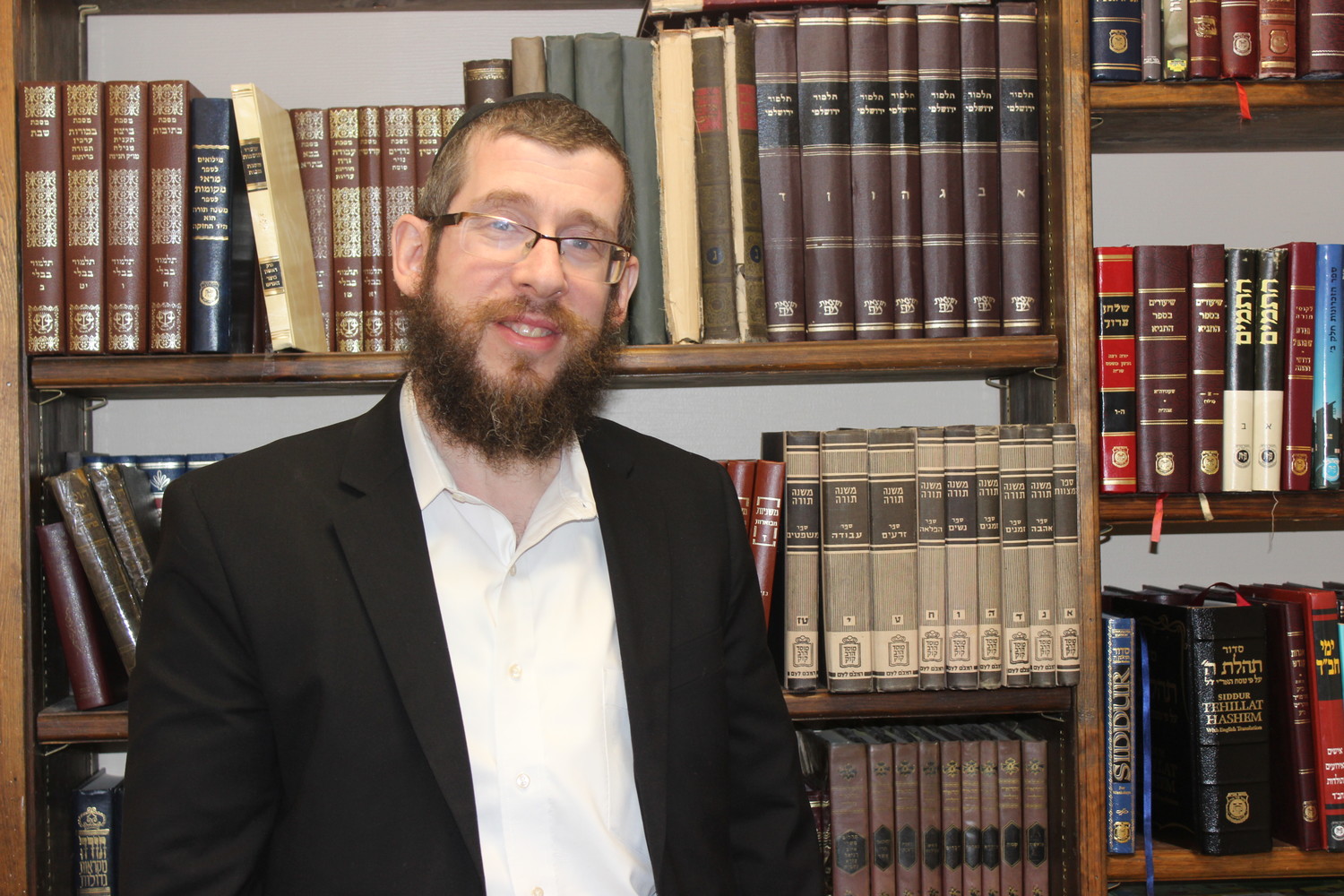 Rabbi Shimon Kramer, of the Chabad Center for Jewish Life in Merrick, dedicated his life to charity long before bringing his enthusiasm to the Merrick community.
BRIAN STIEGLITZ/HERALD LIFE 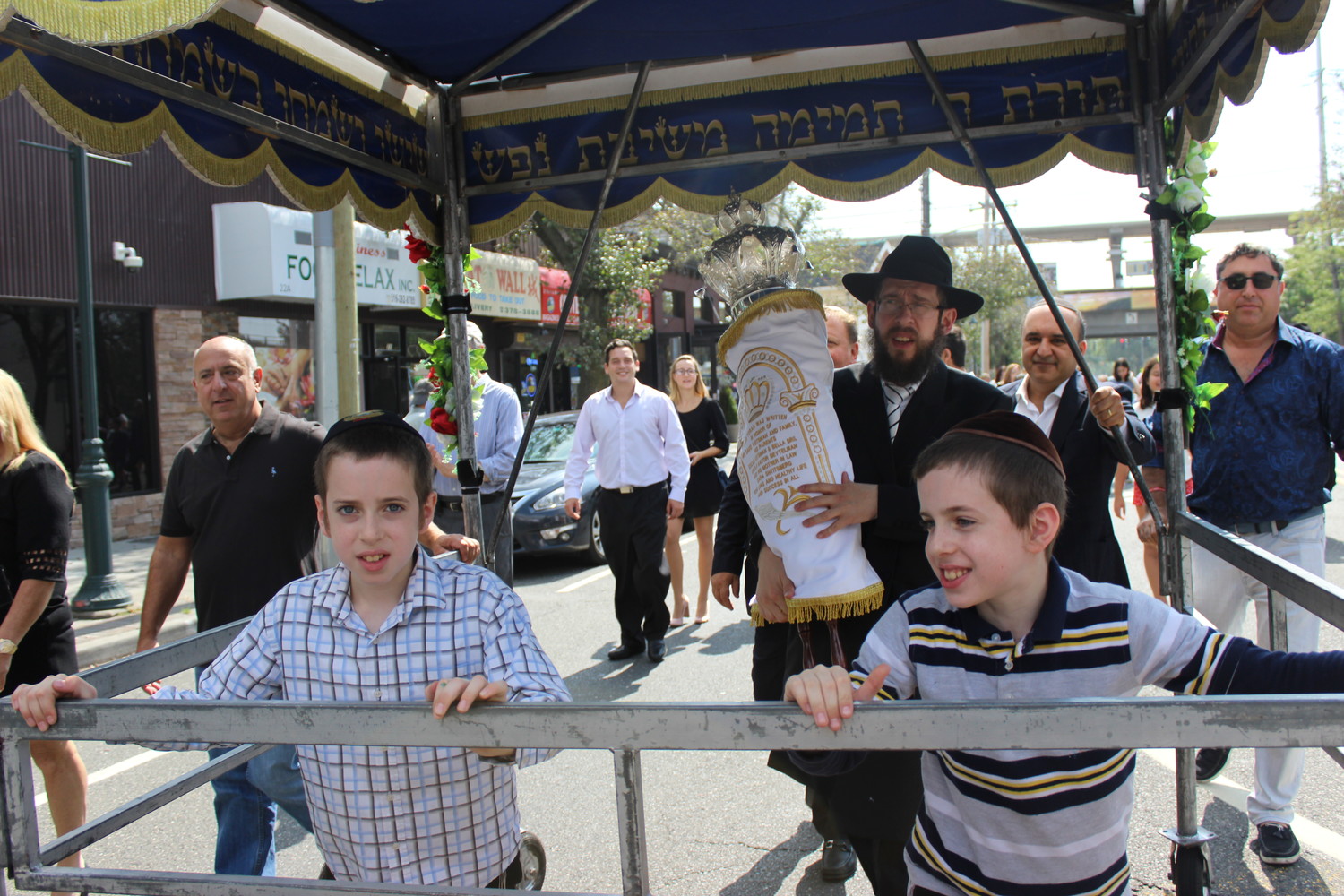 Rabbi Shimon Kramer, of the Chabad Center for Jewish Life in Merrick, marched up Merrick Avenue with his congregation’s new Torah scroll when it was unveiled this fall. His sons Binyamin and Leibel, both 10, joined him.
BRIAN STIEGLITZ/HERALD LIFE 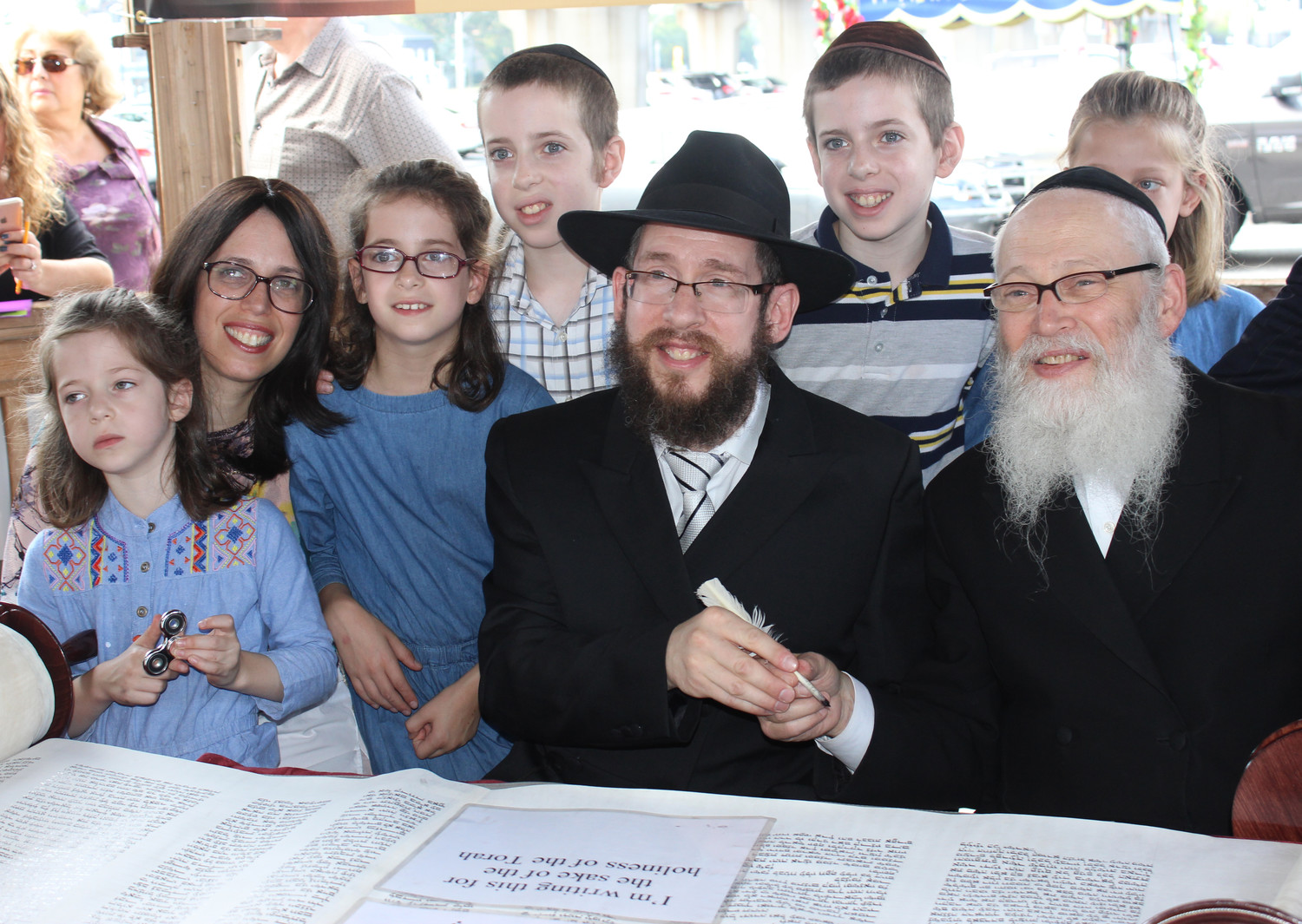 The Chabad Center finished drafting its new Torah scroll in the Merrick train station gazebo on Sept. 17. Above, from right, were Rabbi Moshe Klein, the Torah’s scribe; Kramer; his wife, Chanie; and their children, from left, Leah, 6, Mirel, 8, Binyamin, Leibel, and Sarah, 8.
BRIAN STIEGLITZ/HERALD LIFE 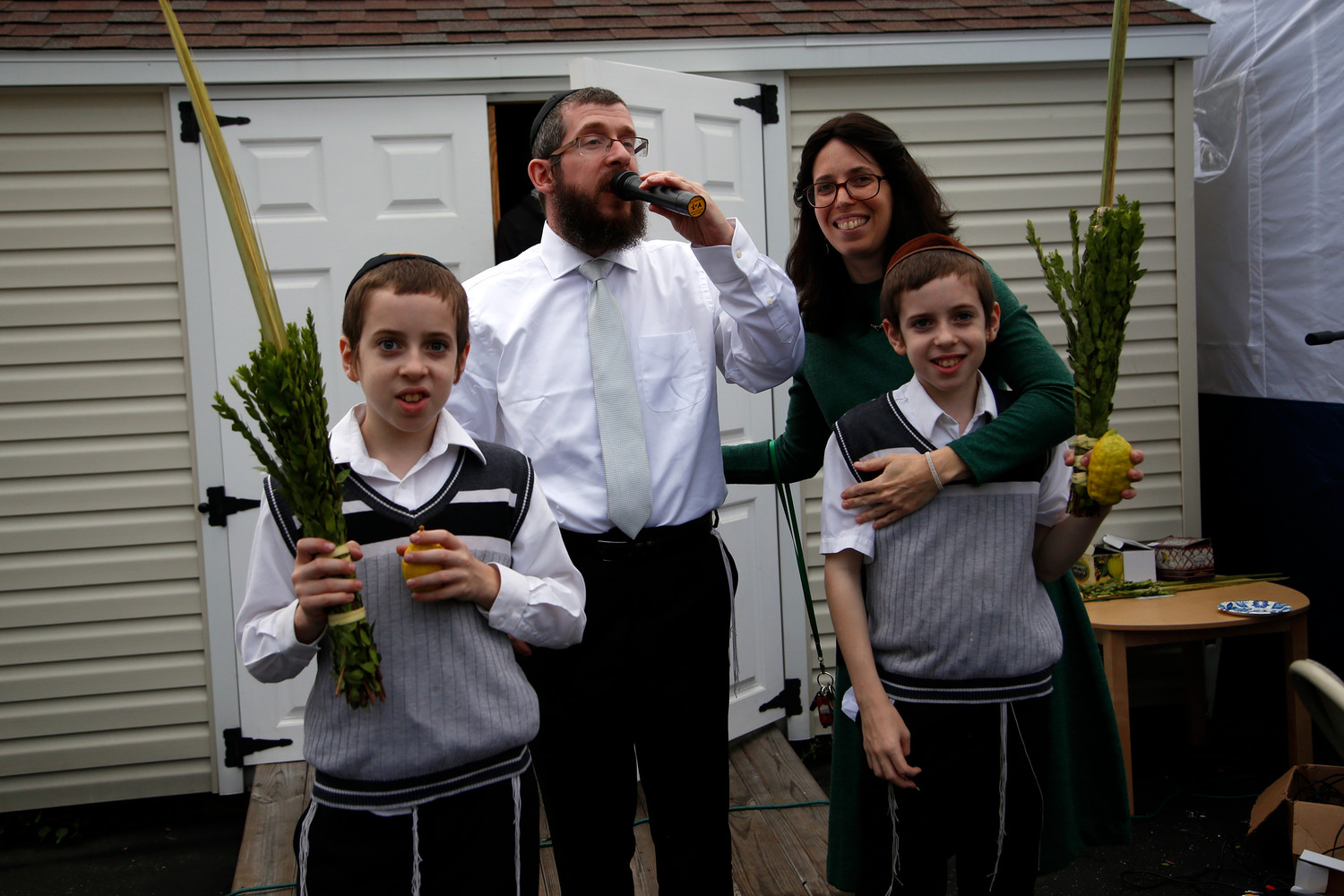 The Kramers and their sons led Simchat Torah festivities this year at the Chabad Center.
SUE GRIECO/HERALD
Previous Next
By Brian Stieglitz

Long before Rabbi Shimon Kramer established the Chabad Center for Jewish Life in Merrick, he would walk up 5th Avenue in Brooklyn every Friday with the hope of improving the lives of the business owners and residents he met.

At 13, Kramer would go door to door and ask people questions about their lives and families, pray with fellow Jews and help merchants in their stores. “Hard-working people enjoy a visit every now and then,” he said.

Kramer was carrying out the lessons he was taught in Chabad-Lubavitch, a movement in Judaism that promotes spiritual enrichment through charity and outreach. Kramer, now 42, said that his life has always been steeped in this philosophy.

This year he contributed to Merrick’s Jewish community by installing a mikvah, or ritual bath, at the Chabad Center, on Hewlett Avenue in Merrick, unveiling a new Torah scroll and raising over $225,000 for the construction of new classrooms and a food preparation area to expand the Chabad’s Cooking for Hope movement, which sends meals to the sick or needy in the community.
For these reasons and more, the Herald proudly names Kramer its 2017 Person of the Year.

“He’s one of the most charitable members of the community,” said Abraham Klein, who has donated to several Chabad causes.

Kramer insisted, however, that the charity events and effort of the Chabad were only possible because of the residents who contributed and supported them. He spoke to the Herald with his wife, Chanie, both of whom had just been tidying the center after the previous night’s Hanukkah event and preparing for the fundraiser that would take place the following week.

“It truly gave a purpose to my life,” Kramer said, adding that recognizing the brevity of a life only inspired him to work harder to make a difference where he could. “If [my wife and I] had an extra day to live, we would do another project,” he said. “We’d help someone else.”

Kramer said that his wife is his partner in everything he does with the Chabad. While he focuses on brainstorming ideas, she executes them. “The program last night was all credit to Chanie,” he said, as she entered the office where he was speaking with the Herald, referring to the Chabad’s first Hanukkah parade down Merrick Avenue.

“That’s not true,” Chanie interjected. “Without him it wouldn’t have happened.”

The Kramers were introduced by family members and married on June 1, 2000. In 2006, a friend and fellow rabbi told Shimon that there was demand for a Chabad center in Merrick. The following year, he and Chanie moved to a house on Seneca Gate and began holding programs there and in rented spaces. In 2011 they began construction of a community center, in an office building shared with the Merrick Professional Center on Hewlett Avenue.

The community center immediately began offering an array of programs, including adult and children’s education programs, holiday celebrations, crisis intervention, counseling services, job placement, support groups and relief efforts. Some of them are still expanding, such as Circle of Hope, which provides support and services to community members coping with breast cancer and other severe illnesses, and its counterpart Cooking for Hope, which sends meals to the sick and needy in Merrick.

Recently, Chanie received a letter from one of the people Circle of Hope helped. The woman, who wanted to remain anonymous, was provided with a wig, a hat and wig shampoo, and was offered a multitude of related support resources. “The people here are absolutely beautiful in spirit and in person,” she said of the community center.

“[Kramer is] wonderful, him and his wife,” said Cindy Knoll, who brought the idea of Circle of Hope to the Chabad. “They’re very giving to the community,” she said. “Not only in businesses or donations, but in friendship also.”

The Kramers knocked on Knoll’s door shortly after they moved to Merrick. Since then, she has been an active contributor to the community center’s efforts and programs.

On June 11, Kramer celebrated the grand opening of the mikvah at the center. The structure is so important to Jewish tradition that if a community cannot afford one, it must sell the synagogue and Torah to raise the necessary funds, according to Kramer.

He noted that its construction could not have been completed without the volunteer efforts of dedicated community members, such as Knoll, who helped design the interior.

Also this year, the Chabad Center unveiled its new Torah scroll, sponsored by Bellmorite David Veitsman and his family, in the Merrick train station gazebo. Kramer said that the Chabad wanted to introduce the Torah right before the holiest holidays in the Jewish tradition, Rosh Hashana and Yom Kippur.

The community center also raised more than $225,000 to build three new classrooms and a food-preparation area for Cooking for Hope at a fundraiser Dec. 19 and 20. The Chabad saw such a high demand for its education program this year that it had to turn away 60 children, according to Kramer. That was why he created Build for Light, a plan to ensure that the Chabad attains the necessary funds to provide opportunities for more children.

“It’s pretty risky what we’re doing,” Kramer said the week before the fundraising effort. The catch was that four donors and friends of the Chabad had agreed to match each dollar donated by a resident.

Kramer said that there are many families in the Merrick community who need care and assistance, and added that, metaphorically speaking, they live in dark houses. “It’s not hard to light up their homes,” he said. “We just need to bring them a candle.”
Report an inappropriate comment