Radio show to amplify local issues, artists and activists on the North Shore 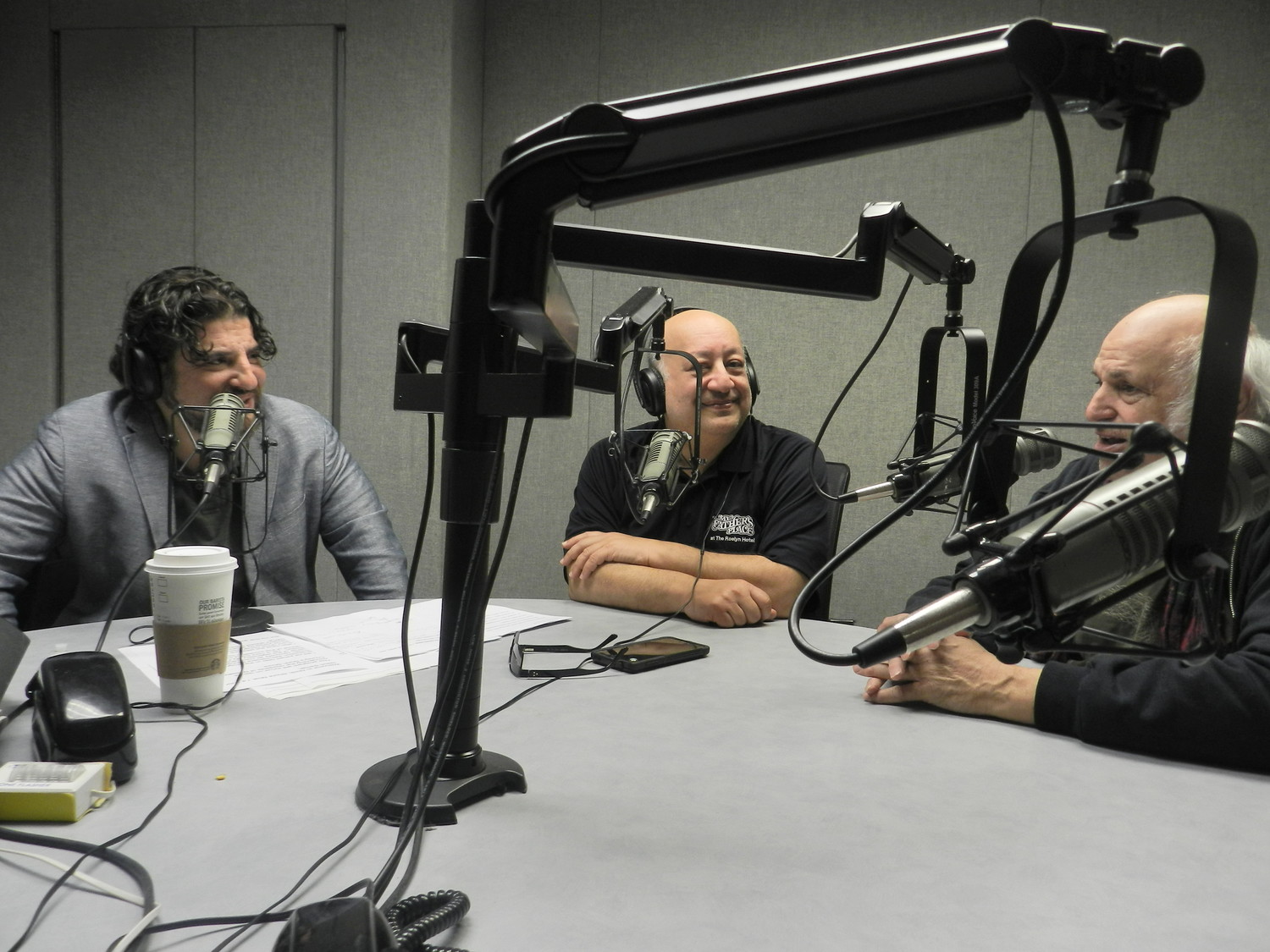 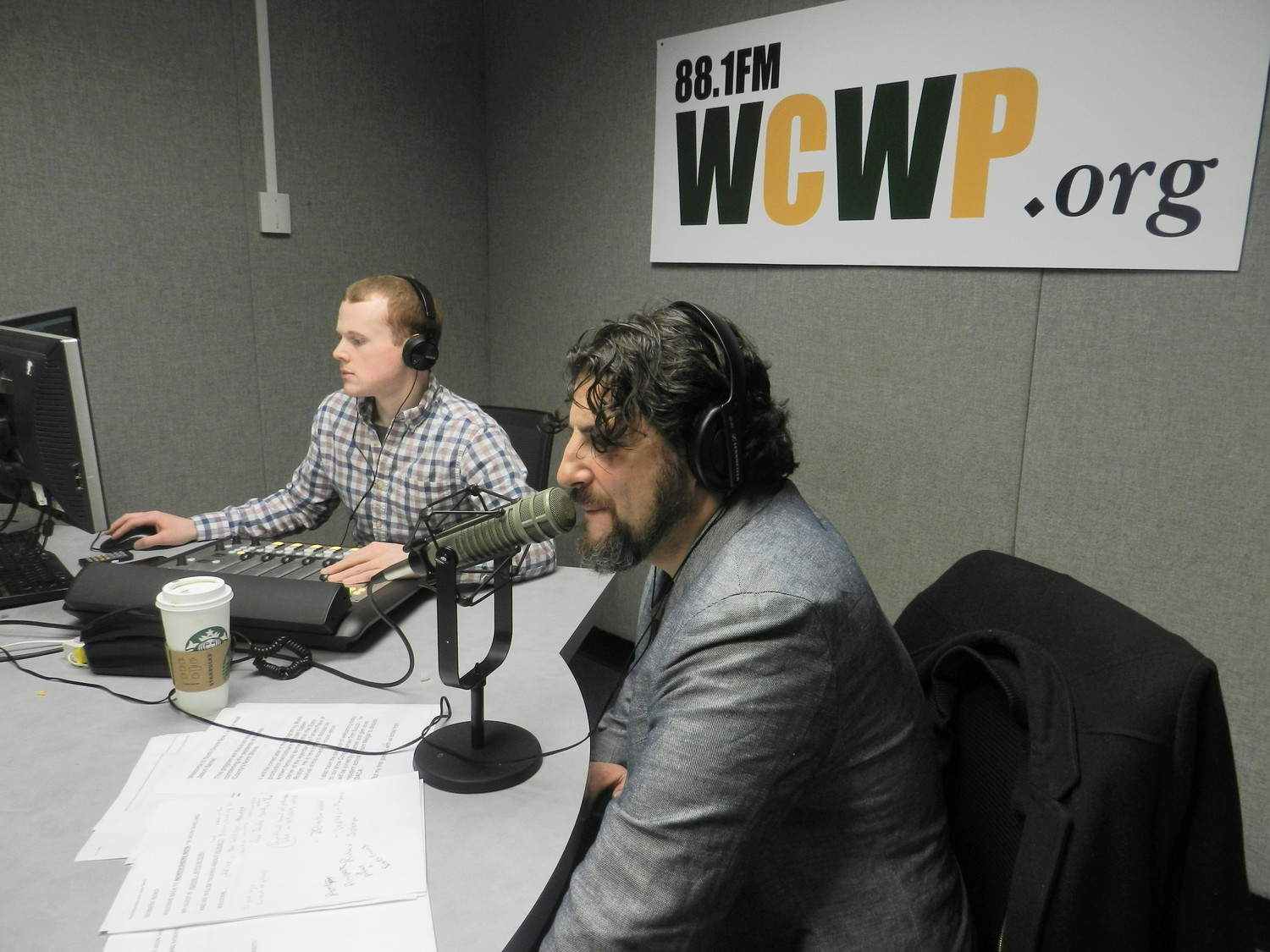 Jason Samel, a resident of Old Brookville, pre-records his interviews in the studio at WCWP on LIU Post’s campus.
Alyssa Seidman/Herald Gazette
Previous Next
By Alyssa Seidman

Amid a tangle of headphone cords, microphone wires and half-empty coffee cups, radio show host Jason Samel, of Old Brookville, organized his papers — marked up with reference points and annotations — before a production manager pressed “record” on the studio’s switchboard. Samel was joined by fellow North Shore residents, who will be featured on his new show “North Shore Now.”
A weekly, one-hour program that focuses on local politics, issues, artists and activists, the show had its first broadcast on April 2 on WCWP, 88.1 FM, LIU Post’s campus radio station. In Samel’s words, “It’s the people that are making North Shore happen right now.”
Samel, 40, an insurance broker by trade and an activist by avocation, said he was no stranger to the realm of radio. “I’ve been interviewed on television and radio well over 100 times,” he said. “I’ve been into activism for a very long time, and activism to me is shining a light on issues that need a light shined on.”
His inspiration for “North Shore Now” was his desire to invite local voices to weigh in on the issues. “I wanted to bring in people who are making positive change locally, and to talk about some of the controversial things that are going on in the neighborhoods,” he said. “I want to try to project the people’s voice as much as possible.”
When WCWP was looking for a host to produce a local news program, Samel went for it.


“We’re here to bring you real people that have real feelings and opinions, and they’re all going to differ from each other, especially with the list of people we have coming on board,” he said.
The inaugural show featured community activist Agatha Nadel, of Glen Head, who has been leading the local fight against the inequitable rates imposed by New York American Water with fellow residents. “He seemed very passionate about the water issue,” Nadel said of Samel, “and had the same energy our group has in terms of wanting to win this war. He wants the word out.”
Other guests included Glen Head resident Bill Mozer, who talked about his “colorful community Facebook page” and a more serious issue, racism, and Bob Frier, who ran unsuccessfully for Oyster Bay Town Board last year.
Next Monday, “North Shore Now” will feature U.S. Rep. Tom Suozzi and Will Casale, a Glen Cove High School student, who will discuss the issue of gun violence.
Another guest on the upcoming show will be Glen Cove resident Mike “Eppy” Epstein. He talked with Samel about his plans to resurrect My Father’s Place, a once-popular restaurant in Roslyn, which will reopen as a nightclub in June.
Epstein said he believes the show’s wide-ranging subject matter suits Samel perfectly. “Jason is apolitical,” he said. “I think he’s a very bright kid, and he could have a very good career in broadcasting.”
Future guests will include former Glen Cove Mayor Reggie Spinello and current Mayor Tim Tenke.
Although it is in its infancy, “North Shore Now” has received “incredible feedback” from people in the community, according to Samel. “People are so excited to have a news show that touches on local, North Shore news, and they’re also excited to have somewhere to project their voice,” he said.
Radio, he added, offers residents a more in-depth look into the issues affecting the North Shore, whereas a platform like Facebook, whose comment section is often overused for politically charged debate, leaves a lot to be desired.
“It’s important to get in-depth with these issues, and on Facebook, with so many people commenting, saying whatever’s on their mind, it’s very difficult to dive deep,” Samel said. “I think radio gives us that opportunity.”
The host said he had high hopes for his new show. “I hope we develop a good, solid listenership on both sides of the aisle, and that every type of person, of every age and culture, has their ears on our station,” he said. “I want to turn it into something that the community feels is an outlet for them and is an amplification of their voices.”
“North Shore Now” can be heard on WCWP every Monday at 10 a.m.
Report an inappropriate comment