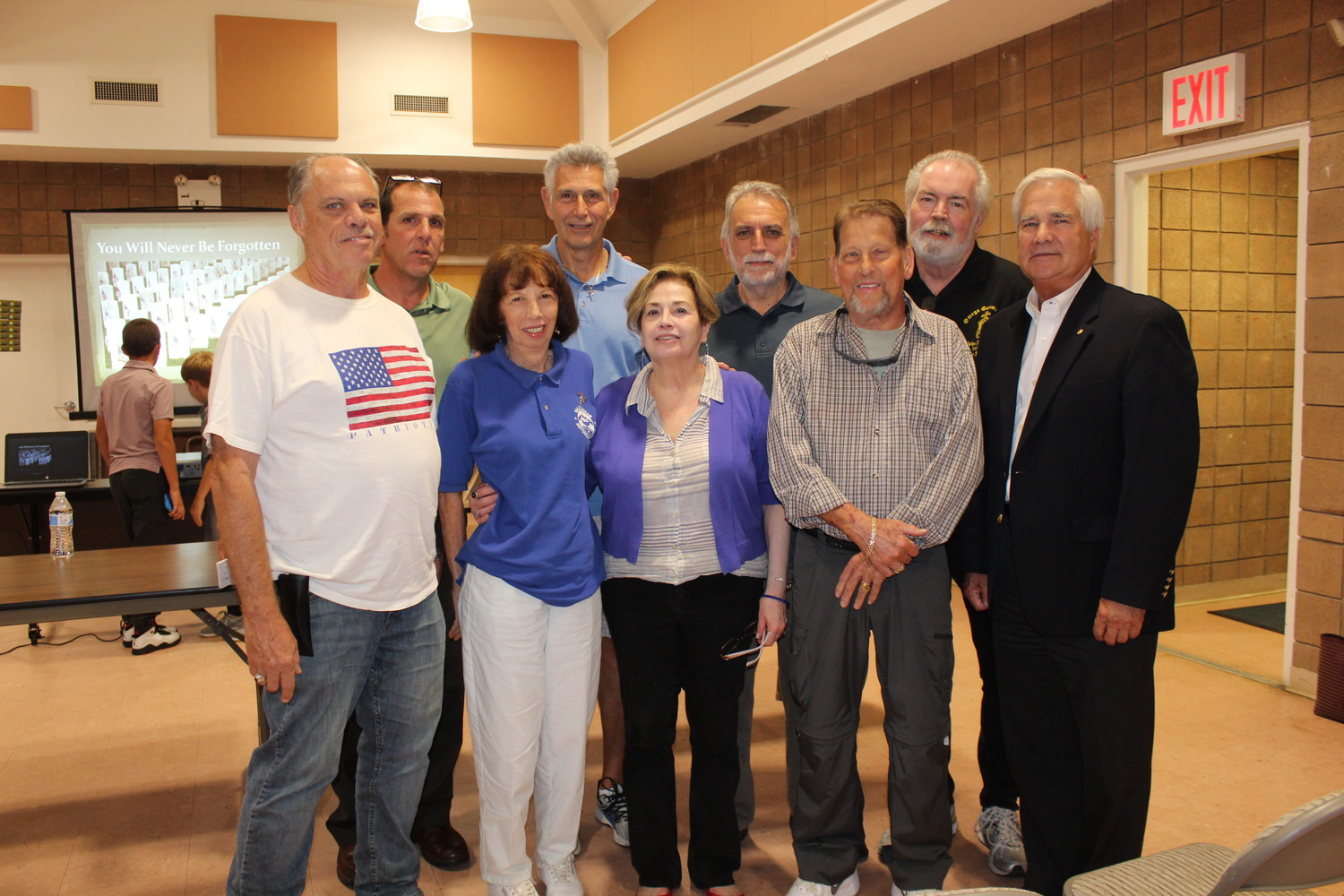 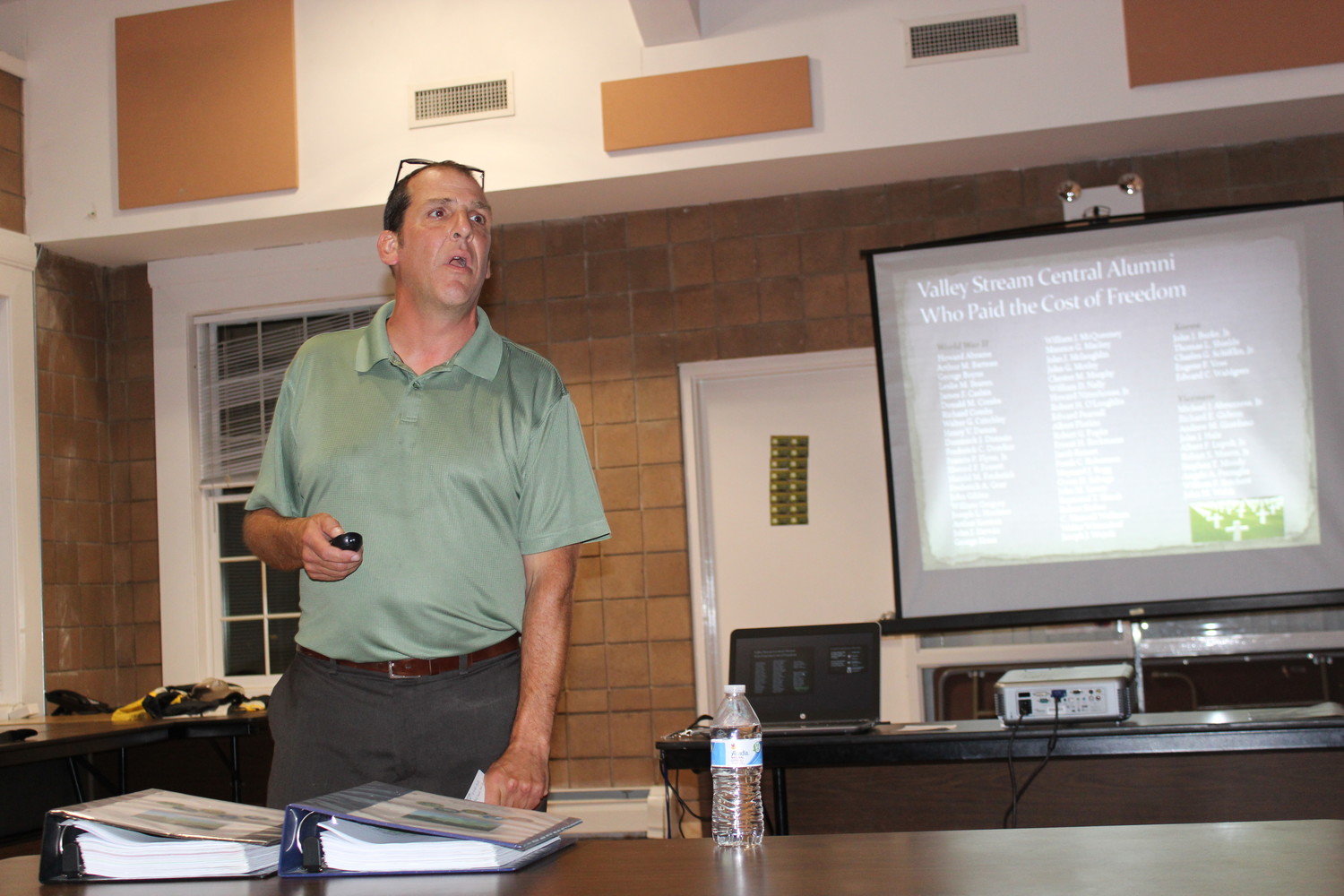 Chris Critchley, a history teacher at Central High School, gave a lecture about the 58 former students who died in World War II, the Korean War and the Vietnam War on Sept. 27 at Firemen’s Field.
Melissa Koenig/Herald
Previous Next
By Melissa Koenig

When Chris Critchley was researching his family’s history three years ago, he wanted to find out whether he was related to Walter G. Critchley, whose name he saw on Central High School’s World War II memorial plaque. That desire compelled him to pore over military records and speak to the families of the 57 other young adults who studied at Central High School and died fighting in World War II, and the Korean and Vietnam wars.

“When I saw how easy it was to find the information for Walter G. Critchley, concluded he wasn’t a relative of mine, [but] I couldn’t stop there,” Critchley, a Central High School history teacher, told a group of Valley Stream Historical Society members, Central High School alumni, current students and Vietnam veterans on Sept. 27. “I needed to learn about these other individuals, and I knew I couldn’t bring them back to life, but I could resurrect their memories.”

To conduct the research, he enlisted the help of Valerie Esposito, a historical society trustee and Central High School alumna, whom he met at Central High School’s Memorial Day ceremony last year. Esposito already had information about several of the students who died in the Korean War and Vietnam, which led to the dedication of the school’s Korean and Vietnam Wars Memorial in 1998.

“Between the two of us, we were able to piece together who they were,” Esposito said.

After several months of collaboration, Critchley compiled his research into two binders. It is now at the Library of Congress and at the Pagan-Fletcher House on Hendrickson Avenue. Critchley has also shared his research with his sons and his students. In fact, he said, Central High School students annually go to Washington, D.C., where he points out the former students’ names at the memorials. He also searched for and visited several of the students’ graves across the country, which impressed the secretary of the historical society.

“Going to visit the graves of these people, it’s touching, it really is,” said Karen Selah, who is also a Central High School alumna who knew some of the students who died in Vietnam.

The 58 students included in their research came from varied backgrounds. Some were football stars, some were members of fraternities, and some were student musicians. Many were pilots, which Critchley suggested might be because of the school’s proximity to Curtiss-Wright Airfield and the education they received at Central.

“You don’t become a pilot if you stink at math,” he joked.

They perished in battles and in plane crashes. One man was decapitated. Owen Salvage was captured by the Kenpeitai, the Japanese military police in World War II, and later bayoneted.

“Just like any military guy that gave their life, in their mind they’re not thinking about, ‘I’m saving somebody’s freedom 50, 70, 100 years later.’ They were thinking about their own lives,” Critchley told the Herald after the lecture. “But that’s ultimately what they did: They provide the freedom that protects us, that protects my children that will protect my grandchildren hopefully in the future.”

Jerry Lange, a Central High School alumnus and Vietnam veteran, believes that the freedoms that Critchley spoke of are prevalent in today’s society. “These are the people who allowed Colin Kaepernick to make his protest against what’s going on and to allow the current president to be a moron with his tweets … and if it weren’t for those people we watched tonight, we’d either be speaking German or Japanese,” Lange said.

Now, Critchley said he hopes to expand his research with the help of his students. He would like to set up a “Patriot Club,” comprising honors students in the school who would help him further research the lives of the fallen former North and South High School students. “I’m going to do this whole PowerPoint for them, spark their interest I hope, and have them go out and start this research anew,” he said.