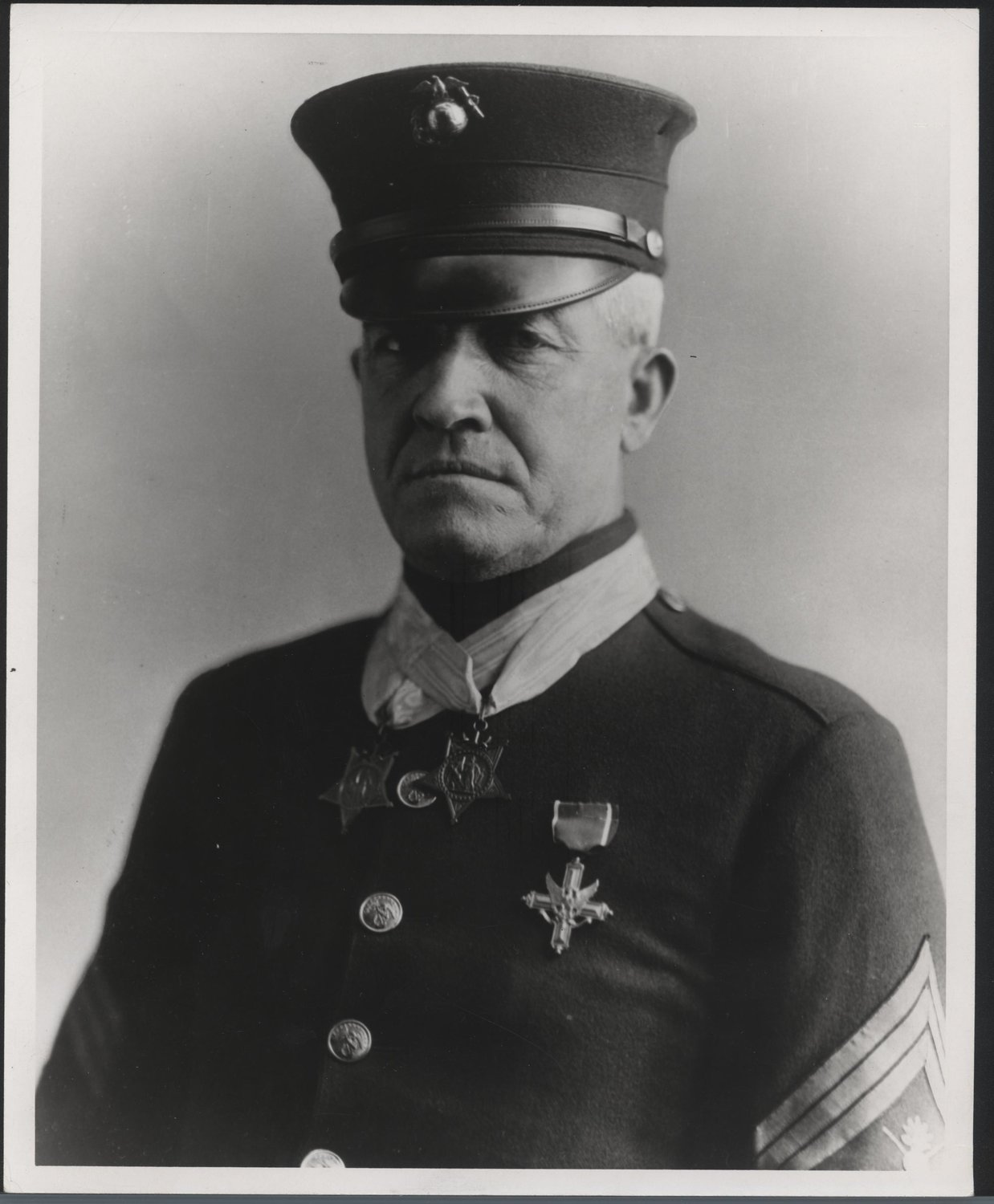 In the history of the U.S. Marines, only two men have ever been awarded the nation’s highest military award, the Medal of Honor, twice, for separate acts of heroism. One of them was Maj. Gen. Smedley D. Butler, who fought in both the Mexican Revolution and World War I. The second man — whom Butler recognized as a man worthy of praise — was Sgt. Maj. Daniel Daly of Glen Cove, who was honored for his actions during the Boxer Rebellion in China, at the turn of the 20th century, and the U.S. occupation of Haiti.

“The fightinest Marine I ever knew,” Butler, a celebrated author and peace advocate, wrote about Daly. “It was an object lesson to have served with him.”

As the nation celebrated Veterans Day on Monday, Robert Pemberton, 90, a veteran of the Marines, urged the City of Glen Cove never to forget the service and legacy of Daly, who, as it happens, shared his birthday with the holiday. Daly is honored at the city’s Monument Park in front of First Presbyterian Church on School Street.

Pemberton said he first became facinated about Daly when he met Daly’s great-grandniece Barbara Harcourt in 1978. She spoke with Pemberton about her connection to Daly, who never married but helped raise his sister’s children, and gave Pemberton an old cigar box she played with as a child. Inside were Daly’s medals, and so began Pemberton’s fascination with this local hero.

Little is known about Daly’s early life, but according to his enlistment records, he was born in Glen Cove on Nov. 11, 1873. He grew up in Brooklyn, enlisted in the Marine Corps in 1899 and was deployed the following year to serve aboard the USS Newark during the Boxer Rebellion. Along with Capt. Newt Hall, Daly was stationed at Tartar Wall, which was attacked by Chinese enemy fighters on Aug. 14, 1900. According to the Marines Corps, when Hall left to find reinforcements, Daly remained to defend the position. Despite being under fire by enemy snipers who stormed the wall, Daly fought them off until the reinforcements arrived.

At 5 feet 6 and about 132 pounds, Daly was hardly a towering figure, but Pemberton said he was a force to be reckoned with. “He fought like a tiger,” Pemberton said. “He didn’t seem like the type of man to die.”

Daly went on to serve aboard the USS Panther, the Cleveland, the Marietta, the Mississippi, the Ohio and the Machias. After Haitian President Jean Vilbrun Guillaume Sam was assassinated in 1915, U.S. President Woodrow Wilson ordered Marines, including Daly’s regiment, to occupy Haiti in order to restore order and protect U.S. interests there. During one encounter with Haitian “banditos,” they surrounded Daly’s regiment, and Daly’s machine gun fell into a nearby river.

“Daly slipped through the banditos, dove into the river and somehow managed to pull the machine gun out of the water and killed the banditos,” Pemberton said.

Despite earning his two Medals of Honor by 1915, Daly went on to serve in World War I in France. At the camp Lucy le Bocage, he was known as a motivator, cheering on his fellow soldiers during heavy bombings by German forces, according to the Marine Corps. In June 1918, the camp was heavily damaged by bombs, and its ammunition room caught fire. After extinguishing the flames, Daly found himself once again in a situation that he was all too familiar with: His troops were outnumbered and outgunned. Encouraging his fellow troops to take up arms, Daly was credited with one of the most iconic lines in U.S. military history. “Come on, you sons of bitches!” he shouted. “Do you want to live forever?”

“You’d really believe him to be a man without fear,” said Fred Nielsen, a fellow Marine Corps veteran from Glen Cove.

By the end of his military career, Daly had earned not only the Medals of Honor, but also the Navy Cross; the Distinguished Service Cross; three Letters of Commendation; a Good Conduct Medal with two bronze stars; the China Relief Expedition Medal; the Philippine Campaign Medal; the Expeditionary Medal with one bronze star; the Mexican Service Medal; the Haitian Campaign Medal; the World War I Victory Medal with Aisne; the St. Mihiel, Meuse-Argonne and Defensive-Sector clasps; the Medaille Militaire; the Croix de Guerre with Palm; and the Fourragere. As World War I concluded with the signing of the armistice on Nov. 11, 1911, Daly called it “not a bad birthday present.”

Nielsen, 73, said that while Daly’s achievements made him seem larger than life, he was a humble man. After his service, he rarely spoke about his time in the military, and was reluctant to be called a hero. He put his medals in a cigar box, moved in with his sister in Queens to help her raise her children, and took a job as a security guard at a Wall Street bank, where he worked for 17 years. He died on April 28, 1937, at age 63, and was buried at Cypress Hills National Cemetery.

Although Daly never married, Pemberton found it amusing that his niece’s family eventually found their way to Glen Cove. With Pemberton’s help, Daly’s family successfully delivered his medals to the Marine Corps, where they are now on display at the National Museum of the Marine Corps in Triangle, Va. Not too far from the museum is the Marine Corps base in Quantico, where Daly Hall memorializes him.

Nielsen is advising local Boy Scout Genalie Prezeau, 14, on his proposed Eagle Scout project to create a star-shaped walkway for veterans to safely access Glen Cove’s Memorial Park, where Daly is honored. Prezeau hopes the project can highlight and honor all the veterans memorialized at the site.