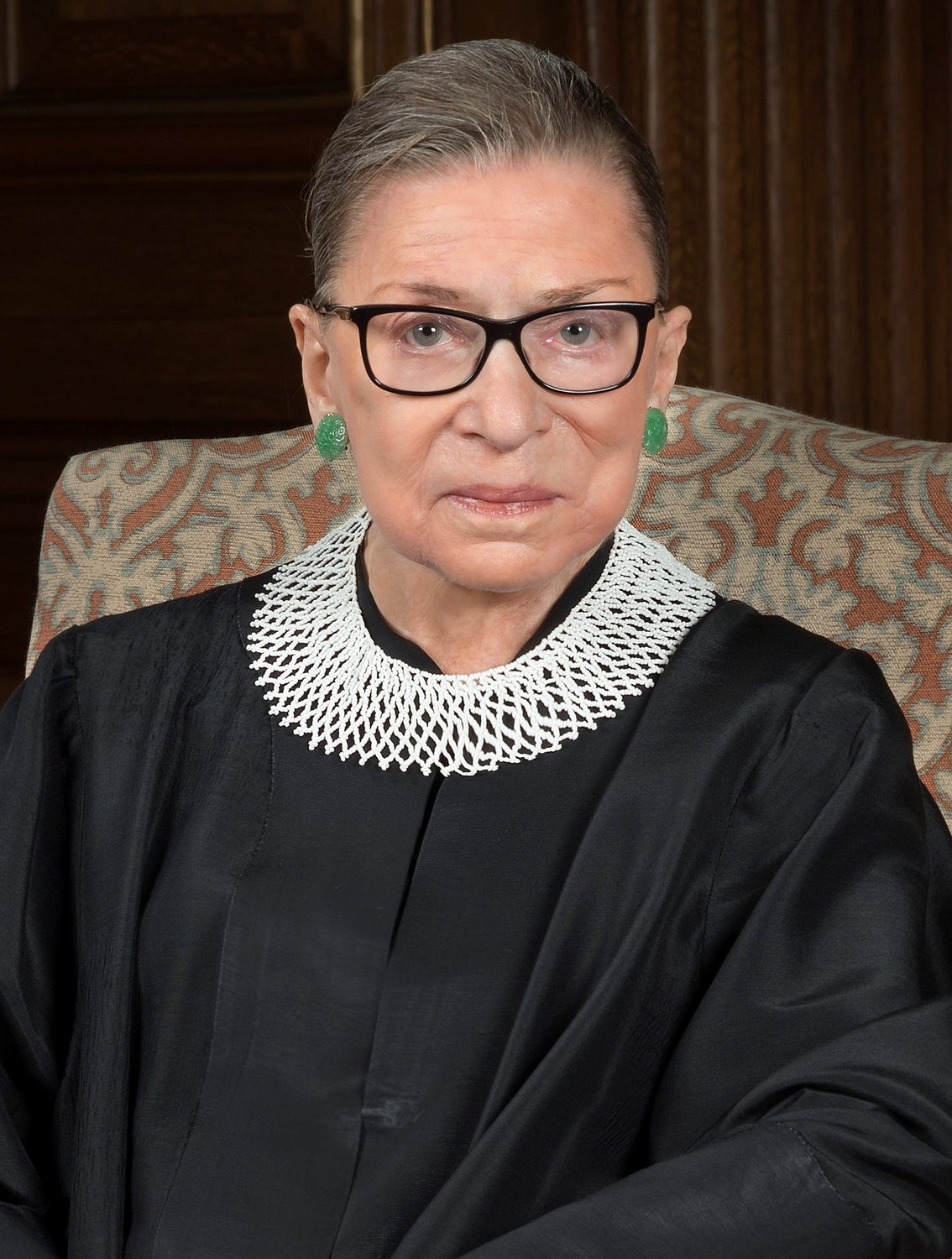 North Shore residents reflected on the life of the late Supreme Court Justice Ruth Bader Ginsburg, who was a feminist icon.
Courtesy Supreme Court of the United States via Wikimedia Commons

She had taught me to never hold back and to speak your mind, even if your voice shakes.’”
Arianna Chetram
Some of Ruth Bader Ginsburg's most notable decisions and dissents

In a disability-rights case, L.C. and E.W. were women with mental illness who were institutionalized in a hospital even after medical professionals recommended that they should continue treatment in a community-based program. Ginsburg delivered the court’s majority opinion that according to the Americans with Disabilities Act, states must place patients with mental disabilities in community rather than institutional settings when states can reasonably accommodate them and when that treatment is appropriate.

In a case focusing on gender discrimination in the workplace, Lily Ledbetter, a female employee at Goodyear for 19 years, sued for pay discrimination, claiming the company violated the 1964 Civil Rights Act. The court ruled, 5-4, that Ledbetter’s claim was “untimely” because it was not filed within 180 days “after the alleged unlawful employment practice occurred.” In her dissent, Ginsburg argued that “insistence on immediate contest overlooks common characteristics of pay discrimination,” which frequently happens in “small increments,” while “cause to suspect” discrimination happens over the long term.

Officials in the school district searched 13-year-old Savana Redding’s backpack and underwear after they were told that she was distributing drugs to her peers. The court ruled, 8-1, that the search violated Redding’s Fourth Amendment protection from unreasonable search and seizure. Ginsburg, the only female justice at the time, expressed her frustration with some of her colleagues for being unable to understand Redding’s plight. “They have never been a 13-year-old girl,” she told USA Today.

The court ruled, 5-4, that Section 4 of the Voting Rights Act — the provision that included clearance requirements for states with a history of racial discrimination before they could pass new voting laws — was unconstitutional. In her dissent, Ginsburg wrote that the decision “terminates the remedy that proved to be best suited to block” voting discrimination. She noted that the 2006 reauthorization of the Voting Rights Act — “with overwhelming bipartisan support” — made it clear that “40 years has not been a sufficient amount of time to eliminate the vestiges of discrimination following nearly 100 years of disregard for the dictates of the 15th amendment and to ensure that the right of all citizens to vote is protected as guaranteed by the Constitution.”

On a chilly and somber Sunday, a small crowd gathered outside State Supreme Court in Garden City to remember the late Supreme Court Justice Ruth Bader Ginsburg, who died last Friday at age 87.

“She lived a life of purpose — a purpose for life that was dedicated to championing women’s rights,” said Mahir Nisar, an attorney from Glen Head. “For somebody such as her who is an inspiration for so many attorneys and those who’ve advocated for civil rights, it’s a sad day, a sad moment to learn of her passing.”

Many said they felt a deep sense of of loss at Ginsburg’s death. Oyster Bay High School alum Arianna Chetram, 20, who is the founder of PWRNNOISE, a nonprofit education reform organization, said she had broken down, almost as if she had lost a friend or a family member. “She had continuously fought for the underdog,” Chetram said of Ginsburg. “She had taught me to never hold back and to speak your mind, even if your voice shakes.’”

Ginsburg, Chetram added, empowered her as a young woman.

Rena Bologna, of Bayville, said she was devastated by Ginsburg’s death. She had opened the door for Bologna to advance in her career, she said, from classroom teacher to assistant superintendent. “I think she broke a lot of ceilings,” Bologna said. “I prayed for her all the time. I think for anyone who felt marginalized, she was their voice.”

June London, of Oyster Bay, said that as she has aged, she has become more conservative. But even though she was not politically aligned with the late Supreme Court justice, London said, she admired Ginsburg for her extraordinary skills on the bench.

“What I didn’t like about her is that she was [on the bench] as an activist,” London said. “You’re not there to pass judgment. You’re there to follow the letter of the law when making decisions. Being conservative, I’m grateful that we have an opportunity to fill a seat with someone more conservative leaning.”

Ginsburg did not pursue law with a civil rights agenda. She went to Harvard Law School, one of nine women in her class, because she said she thought she would be a good lawyer. But after she graduated — despite the fact that she tied for first in her class — she initially had a hard time finding a job as a lawyer because she was a woman.

Working in academia at Rutgers Law School in 1963, she learned that her salary was lower than those of her male colleagues. She got involved with a group of women at the college who fought for equal pay, and their effort was successful. Ginsburg then became involved in sex-discrimination and gender-equality cases as an attorney. As a Supreme Court justice, she was known for her decisions and her sharp dissents (see box).

“She had a long history of advocacy on behalf of women’s rights, and was honored by becoming a Supreme Court justice, both for her intellect and her ideals of the Constitution,” said Ed Lieberman, the mayor of Sea Cliff and an attorney. “As Thurgood Marshall championed civil rights for minorities, Justice Ginsburg emulated that cause as it pertained to equal justice under the law for all people.”

Sharon Lasher, the principal of Oyster Bay High School, said that before she entered academia, she taught law, and was able to take her classes to Washington five times to see the Supreme Court in session. She said she was impressed by Ginsburg, who was small in stature but so powerful when speaking.

“The loss of Justice Ginsburg is personal to me,” Lasher said. “She had a big influence in my life. She was a woman like I was who found herself single after so many years. I was able to buy my own home, have my own credit rating and have no barriers as a woman pursuing a career because of Justice Ginsburg.”

Denice Evans-Sheppard, a lifelong Oyster Bay resident and the director of the Oyster Bay Historical Society, said that Ginsburg would be missed by many, but perhaps most by people of color.

“Justice Ginsburg was for human and equal rights for all,” Evans-Sheppard said, “but she was instrumental in advocating for the rights of people of color and women’s rights. I will miss her tenacity and presence.”

Hope Taglich, 21, of Oyster Bay, led rallies throughout the summer in the hamlet to protest the Memorial Day killing of George Floyd by Minneapolis police officers. Taglich’s Anti-Racist Black Lives Matter Peaceful Protests drew between 70 and 100 people each time.

She said she worries that a conservative Supreme Court justice will be chosen before the upcoming election that will threaten her rights as a woman. “I think it shows how fragile our democracy is if women’s rights to their own bodies are dependent on the death of a terminally ill woman,” Taglich said. “The reason why women don’t need a man to sign a mortgage in order to buy a house is because of Justice Ginsburg.”

Lauren Harnick, a social studies teacher at Oyster Bay High School, is also an attorney. While at Hofstra law school in the mid 1990s, she attended a talk given by Ginsburg. “While I was fascinated by her ability to transcend barriers as a woman and for women in the workplace, I was most impressed by her positive message of ‘agreeing to disagree,’” Harnick said. “She spoke of her close relationship to Justice Antonin Scalia. They were personal friends, and yet had completely opposite interpretations of the U.S. Constitution.”

Ginsburg’s message and personal story, Harnick said, have stayed with her. “I think in today’s divisive political climate,” she said, “we could all learn from her legacy.”

Jennifer Corr and Mike Conn contributed to this story.