Remembering the father of Oceanside’s Chamber of Commerce 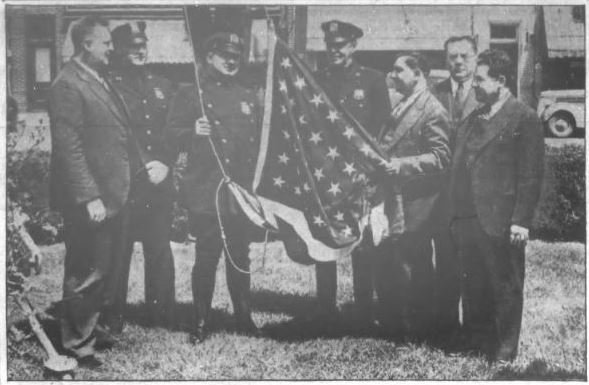 Fred Pieper, third from right, founded what went on to become the Oceanside Chamber of Commerce. Above, Pieper, on behalf of the Board of Trade, handed over a flag to a Nassau County patrolman that was flown on the Memorial Triangle.
Courtesy Seth J. Blau
By Seth J. Blau

The Oceanside Chamber of Commerce recently held its annual event in which it swore in its officers and board of directors for 2019, and honored Leo Bonacasa as its Citizen of the Year, and SVS Fine Jewelry as its Business of the Year. While the events’ program listed all of the chamber’s past presidents going back to Scott Hirschbein in 1992, its past presidents, as well as the organization itself, goes back nearly 60 additional years — to Frederick H. Pieper in 1926.

Pieper, along with his new bride Anna, moved to Oceanside in 1922 during the hamlet’s first real estate boom. Along with his brother, Charles, and brother-in-law, Joseph Tuthill, Pieper started a real estate and insurance business on the first floor of his residence at 386 Long Beach Road. The firm of Tuthill and Pieper would play a large part in the development of parts of Oceanside, Seaford and Massapequa, as well as other parts of the eastern end of Nassau County’s South Shore.

Many real estate developers and speculators moved into the surrounding neighborhoods to take advantage of all of the undeveloped land. Most quickly left after the boom ended, but Pieper stayed. He became a strong proponent of promoting business in Oceanside and worked toward helping it develop its own character. He started Oceanside’s Businessman’s Association in 1926, and was elected president. Many of the meetings were held in his office, which would later be referred to as the unofficial municipal building for the community.

Pieper was able to use this organization, whose name he changed to Oceanside’s Board of Trade, as a platform to advocate for improvements to the businesses and the community. He pushed for improved roads, parking, trolley and train service, school facilities, traffic controls, postal service, drainage and infrastructure. Pieper made sure that the Board of Trade was advised, consulted, and updated on anything that would affect the Oceanside community. As a veteran of World War I, Pieper assisted with the formation and upkeep of Oceanside’s original Memorial Triangle.

While Pieper became very involved with the local Democratic organization by becoming vice president of the Oceanside Democratic Club and a Nassau County Democratic Committee member, he was always mentioned and received bipartisan support to represent the community’s interest. He was a local delegate to the Rivers and Harbors Committee of the War Department to advocate for deepening of the East Rockaway Inlet to benefit all surrounding communities. He was also selected to be a member of the Nassau County World’s Fair Committee.

Pieper was also involved in Oceanside’s Local Welfare Committee, the Oceanside Civic Association, became a proponent of Oceanside incorporating as a village and later the formation of the sanitary district. He was a member of Columbia Engine Company 1, the Long Island Real Estate Board, the Knights of Columbus, and the Elks club.

Pieper died suddenly on April 18, 1939, at 49 years old, following a ruptured appendix. He was serving in his 14th year as president of the Oceanside Board of Trade. His legacy is Oceanside’s Chamber of Commerce. While other organizations have come and gone, his hard work and persistence ensured that the organization would continue long after him.

After his death, an editor of a local newspaper wrote that, “[t]he name Frederick H. Pieper ha[d] been synonymous with all that was progressive and enterprising in the unincorporated Village of Oceanside for 15 years.” The author went on to note that while, “Mr. Pieper remained [in Oceanside] and his confidence in the community was expressed in activities which helped give it a character of its own, bring its businessmen together in a joint effort and in many ways promote the welfare of the village.”

Despite the Oceanside Board of Trade rebranding itself as the Chamber of Commerce in 1992, it remains the same organization that Pieper founded in 1926. Even though it has been many years since the “Welcome to Oceanside” borne the words “In memory of Fred Pieper,” he remains the Father of Oceanside’s business association, i.e., the Oceanside Chamber of Commerce. While his impact on the Oceanside community is everlasting 80 years after his death, Pieper has become just another forgotten figure in Oceanside’s history.