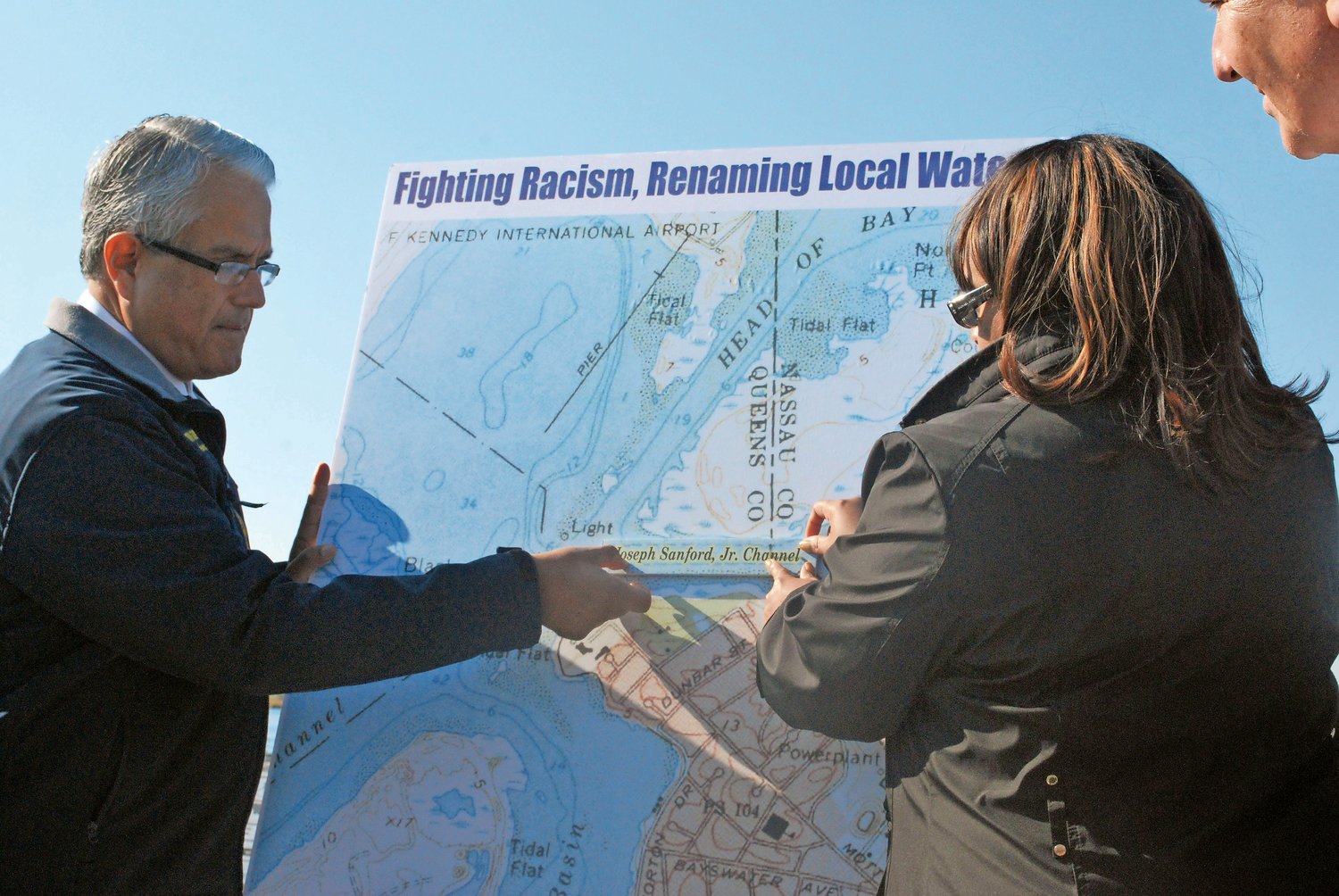 Former Town of Hempstead legislative aide Avi Fertig stepped off the elevator in Town Hall one day in 2016 and took a look at a historical map of the Five Towns. “I was looking at the . . . Inwood area, and it jumped out at me,” said Fertig, a Woodmere resident. “It was a chance finding. I had a small part in it, and I’m proud of it.”

A 1963 act of Congress changed all of the country’s references that used the racial epithet to “negro.”

And in an least one local instance, the name change was taken one respectful step further. On Oct. 9, a nearly two-year campaign begun under former Town of Hempstead Supervisor Anthony Santino’s administration came to a successful conclusion, when President Trump signed a bill into law renaming Negro Bar Channel for the late Inwood volunteer firefighter Joseph Sanford Jr., who was black.

Sanford, an 18-year veteran of the Inwood Fire Department who became a deputy chief and was posthumously promoted to chief, died on Dec. 23, 2014, at age 43, of injuries suffered four days earlier, when he fell through a floor while battling a house fire at 787 Central Ave. in Woodmere, and was trapped under debris.

“I am thrilled that with the president’s signature, we’ve taken an utterly offensive name off the official maps of our local waterways and renamed it in honor of a true hero, Chief Joe Sanford,” Santino said last week. “His sacrifice and courage will now live on in perpetuity.”

After Fertig and a colleague, Matt Coleman, also a legislative aide, researched the original naming of the channel, which runs between Inwood and Far Rockaway, the town sent letters in November 2016 to the U.S. Board of Geographic Names in Reston, Va., and the New York State Department of Education’s Committee on Geographic Names. The federal board is the first stop in a proposed renaming, and after it is reviewed and approved, the state committee acts on the recommendation.

Lou Yost, executive secretary of the Board of Geographic Names, said that its policy is to wait at least five years after a person’s death to make a name change. Emotion usually propels such a request, Yost explained, and five years is enough time to determine the extent to which sentiments may have cooled and to judge whether a potential honoree is truly worthy. “We’ll now change it in our database,” he said. The change will also be reflected on all maritime maps.

To bypass the five-year waiting period, town officials pushed the issue with U.S. Sen. Charles Schumer, who sponsored a Senate bill that passed on Aug. 1. U.S. Rep. Gregory Meeks sponsored companion legislation in the House of Representatives, and that measure passed on Sept. 26. It was presented to the president two days later.

Jacqueline Sanford remembered Santino’s call in which he told her about his idea to honor her late husband. In October 2016, the town had dedicated Davis Avenue, the Inwood Street where Sanford lived with his family, in his honor.

“Joe Sanford was not only my hero, but was a hero to our community,” Jacqueline said. “When [Santino] first told me, I wondered how he was going to do it. Already there’s a lot of important people that got to know a little bit about this great father and my great husband. The important thing is to never forget a man who would help anyone without thought to race or religion.”