Rep. Rice has a plan to combat impaired driving 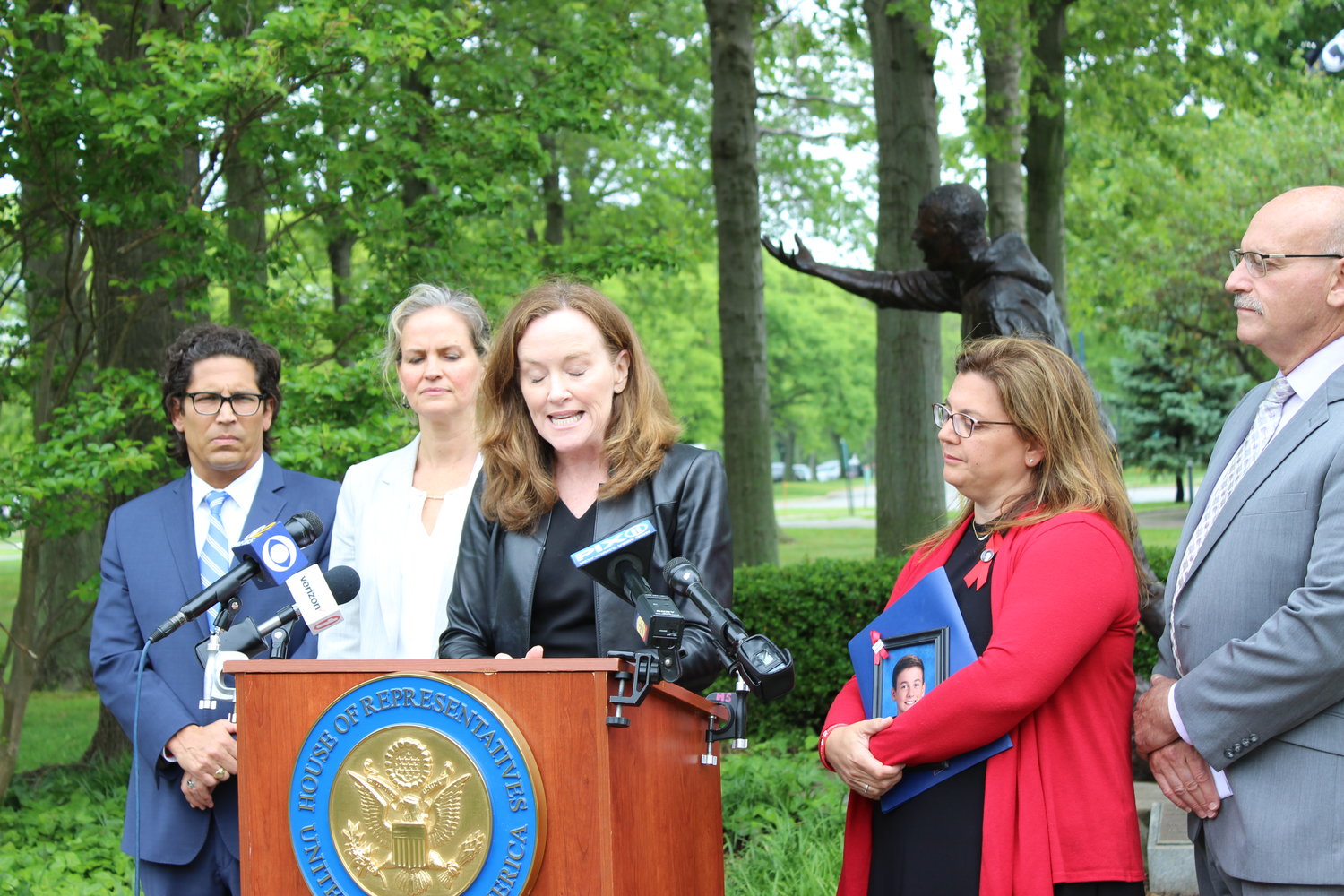 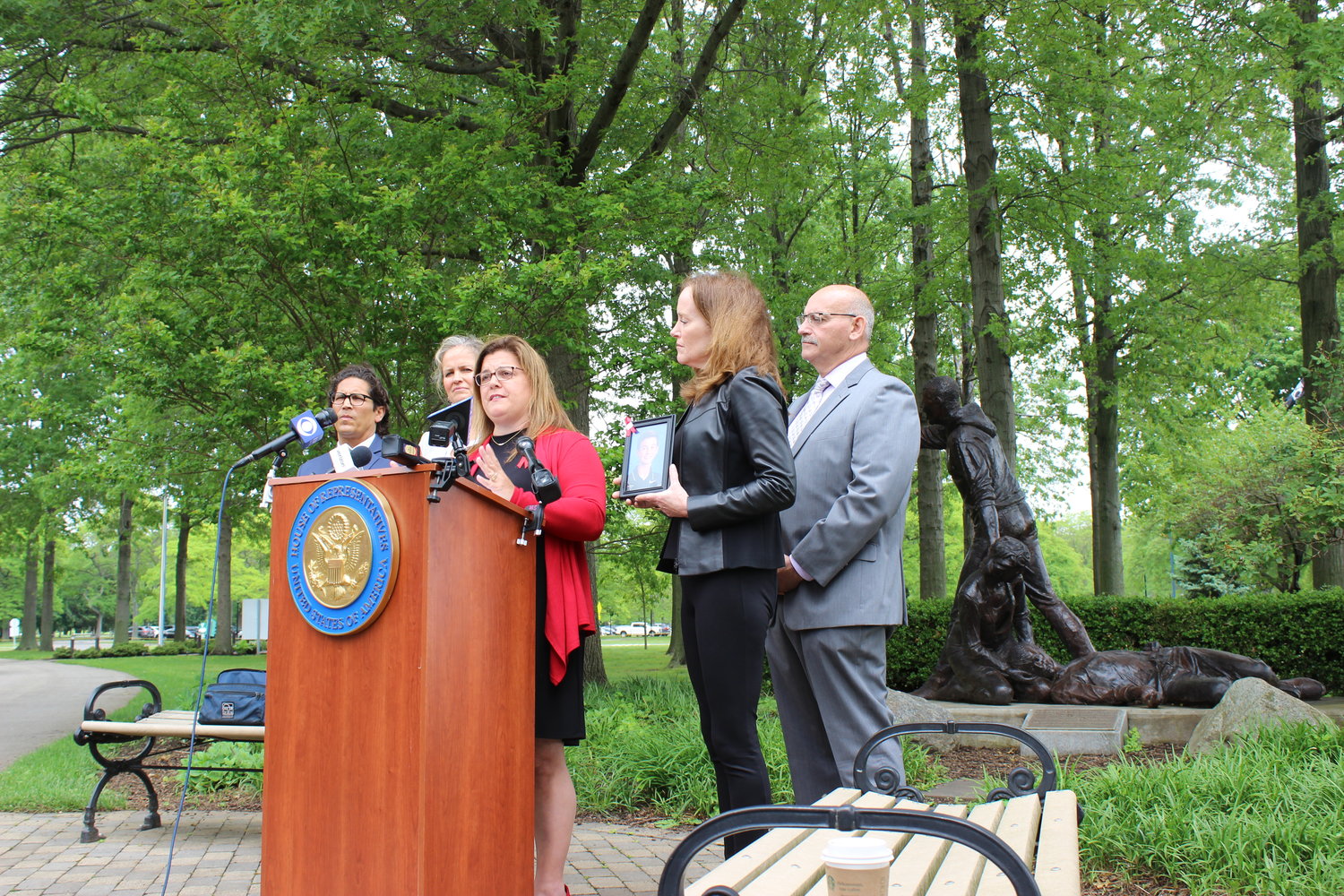 McMorris spoke about her 12-year old son Andrew, who was killed by a drunk driver while hiking in Manorville with his Boy Scout troop on Sept. 30, 2018.
BRIAN STIEGLITZ/HERALD
Previous Next
By Brian Stieglitz

A new bill introduced by Rep. Kathleen Rice would require all new cars sold nationwide to be equipped with a technology that prevents a vehicle from moving if the driver has a blood alcohol content above the legal limit.

Rice announced the bills at Eisenhower Park in front of its memorial for drunk driving victims. Beside her was Alisa McMorris, of Wading River, whose 12-year old son Andrew was hiking in Manorville with his Boy Scout troop on Sept. 30, 2018 when they were struck by a drunk driver. They were rushed to a nearby hospital, but Andrew died the next day.

“The day I lost my son was the worst day of my life,” McMorris said. “Part of me died that day. It shattered my family, my community and changed me in a way that I could not even begin to describe for something that was 100 percent preventable.”

McMorris described her son as someone with a strong moral compass, who always stood up against injustice. Inspired by him, she advocates for changes that could prevent another parent from having to lose their child.

“To have to stand with another parent who has lost their child at the hands of an intoxicated person is just heartbreaking,” Rice said. “It’s enough — it’s enough. And that’s why we’re here.”

The End Drunk Driving Act would mandate that, within 10 years, all cars sold nationwide come equipped with technology that would detect a driver’s blood alcohol content and prevent the vehicle from moving if it is above the legal limit.

In 2015, prototypes of such technology have been developed through the Driver Alcohol Detection System for Safety program, a partnership between the National Highway Traffic Safety Administration and the Automotive Coalition for Traffic Safety. The prototypes include touch-based and breath-based equipment, both of which use infrared sensors to detect a driver’s BAC.

Researchers at the University of Michigan conducted a study revealing that installing DWI-prevention technology could prevent 85 percent of all drunk driving-related fatalities over 15 years, saving more than 59,000 lives and preventing an estimated 1.25 million nonfatal drunk driving-related injuries. The study also concluded that this could save nearly $343 billion over the same period, recovering the cost of installing the technology would be recovered within the first three years.

While there would most likely be an additional cost to automobile manufacturers, which could be passed on to the consumer, Rice said it is necessary life-saving technology and likened it to the introduction of seat belts and airbags.

Another bill in Rice’s package is the Prevent Impaired Driving Child Endangerment Act, which will set a national policy regarding penalties against those who drive drunk or impaired with a child passenger. The legislation would require every state to adopt standards similar to New York State’s Leandra’s Law.

Offenders would also be required to undergo an alcohol, substance abuse and mental health assessment and receive treatment if necessary. The case would be added to state child abuse registries and states that fail to comply could have certain federal funding withheld by the U.S. Secretary of Transportation.

Rice also noted that distracted driving is an equally important issue, especially among young drivers who text and use social media behind the wheel. “They have never been more distracted behind the wheel and the consequences, as we all know, have been deadly,” Rice said. “We need our young people to change their behavior.”

Under the Distracted Driving Education Act of 2019, the U.S. Secretary of Transportation would award $5 million to nonprofit organizations that educate the public about the dangers of distracted driving.

“Drive along our highways, or our parkways, take not of how many trees have pictures or flowers attached to them,” he said. “ . . . Substance use, misuse and abuse and making terrible choices that lead to horrific consequences are putting too many lives in jeopardy and taking too many lives.”