Police: ‘swatting’ prank was retaliation against L.B. teen who won Call of Duty 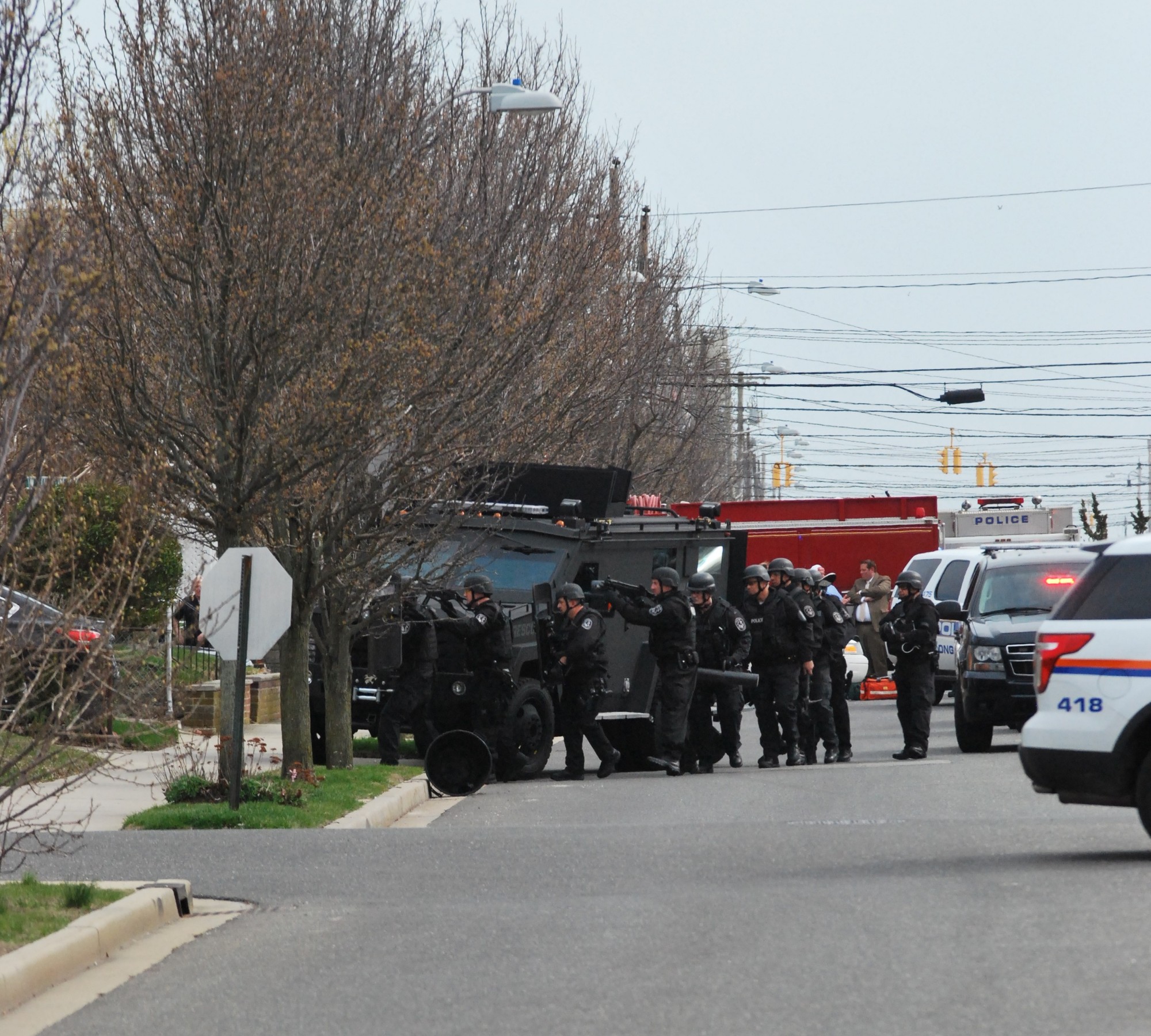 A Nassau County Police Department SWAT team entered a home on Laurelton Boulevard Tuesday after a false 911 call was made to police claiming that a teenager had shot his mother and brother.
Bill Kelly/Herald 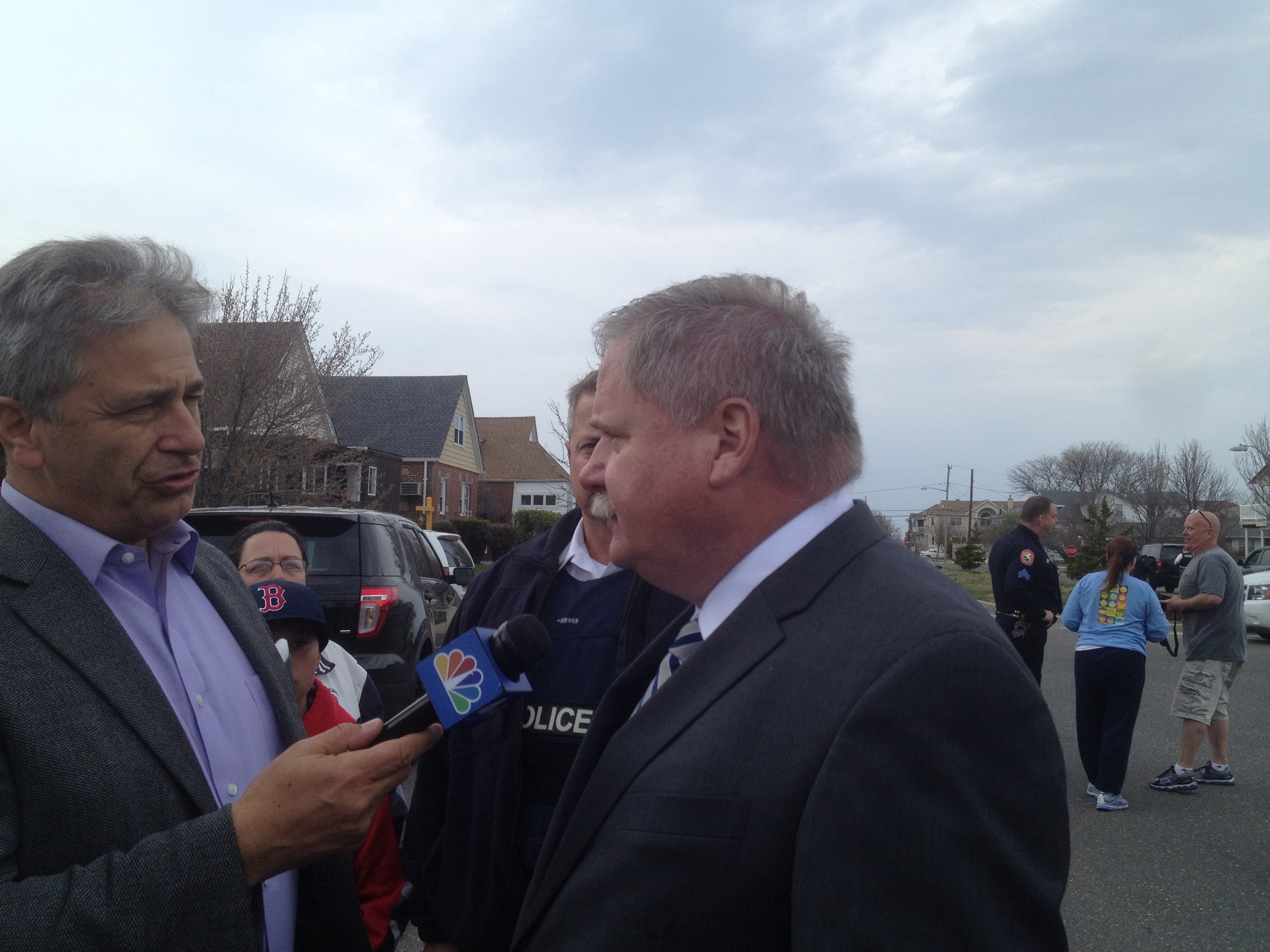 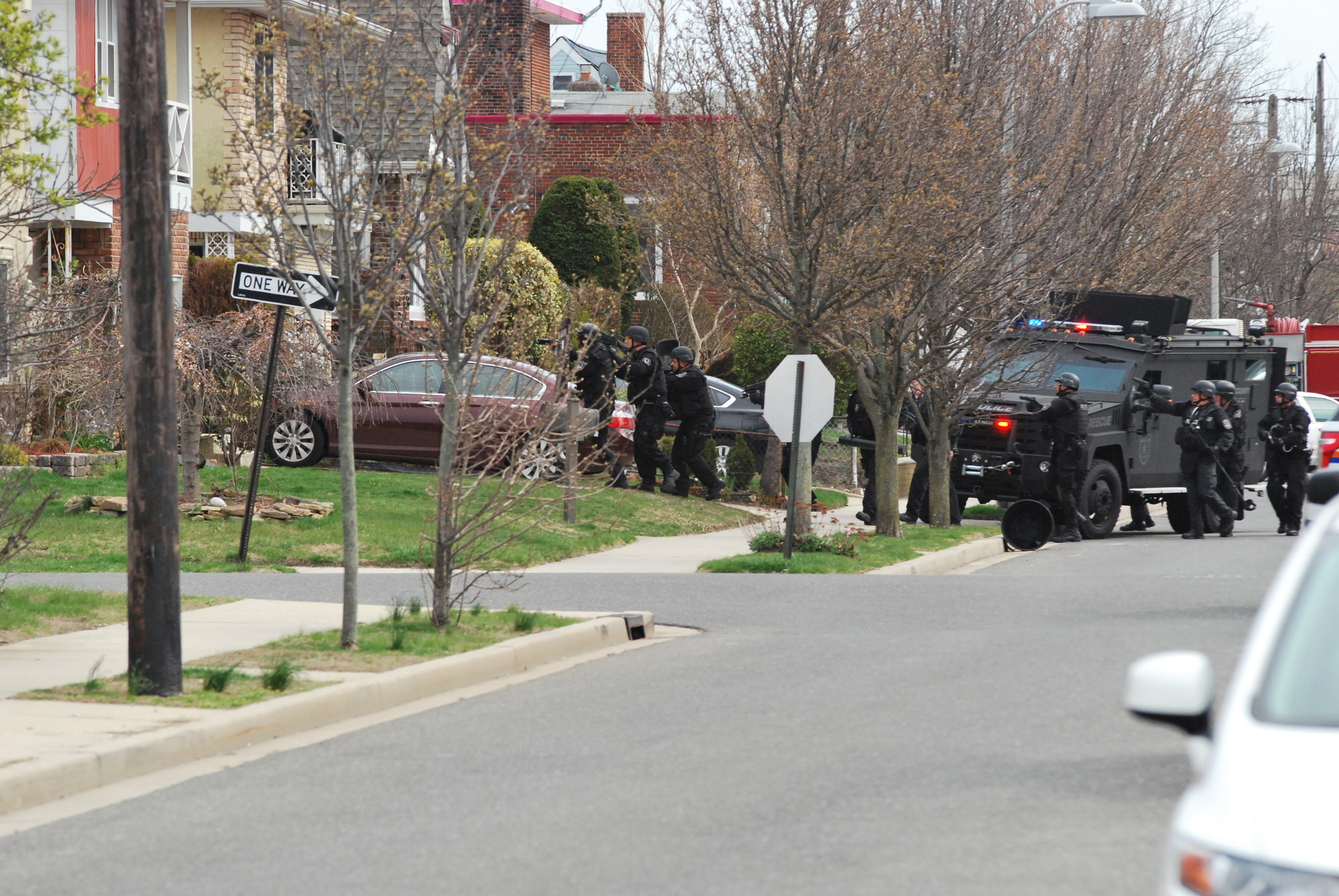 The SWAT team entered the home to conduct a search after the family was safely removed.
Bill Kelly/Herald 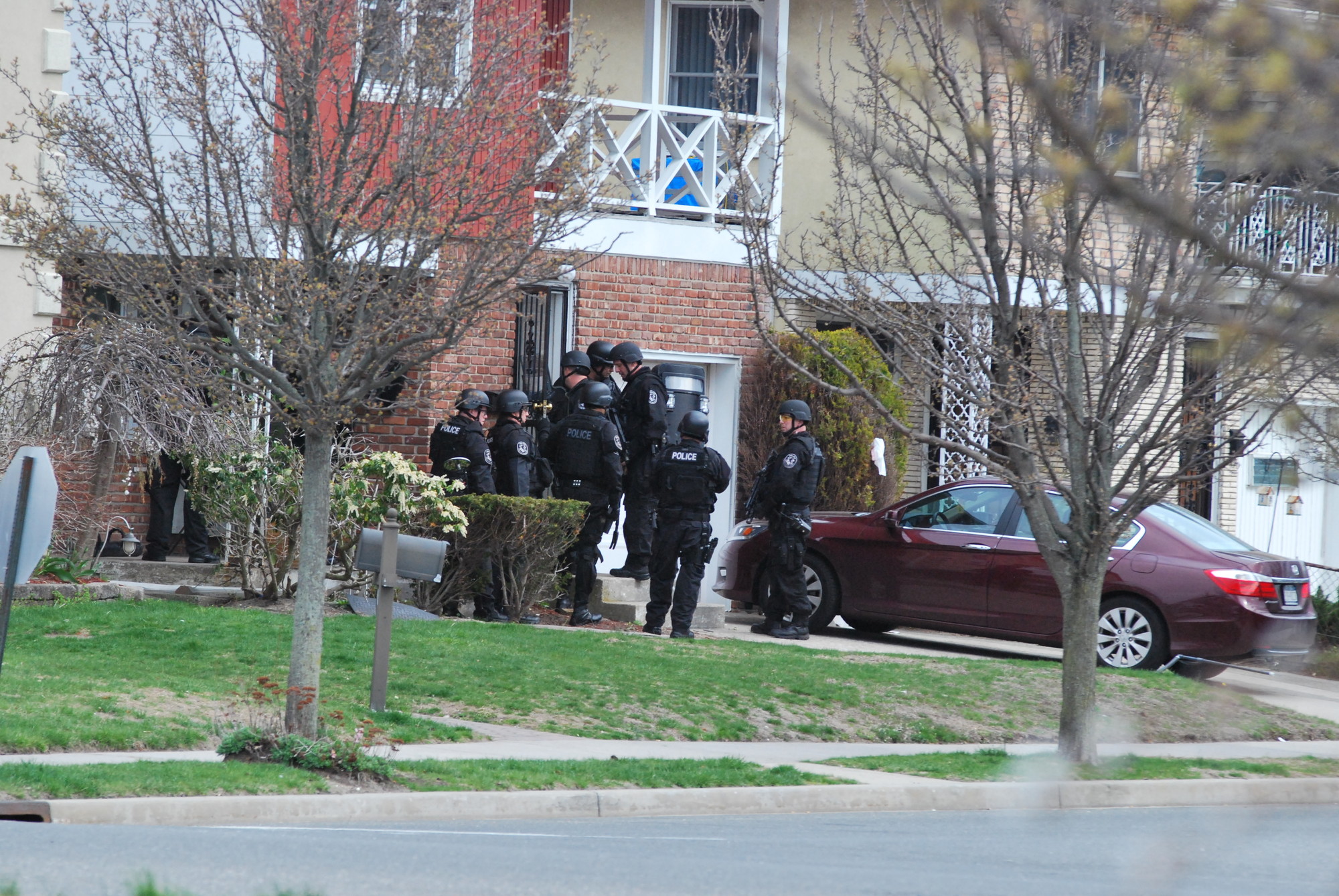 SWAT entered the Laurelton home on Tuesday, in what was determined to be a hoax.
Bill Kelly/Herald 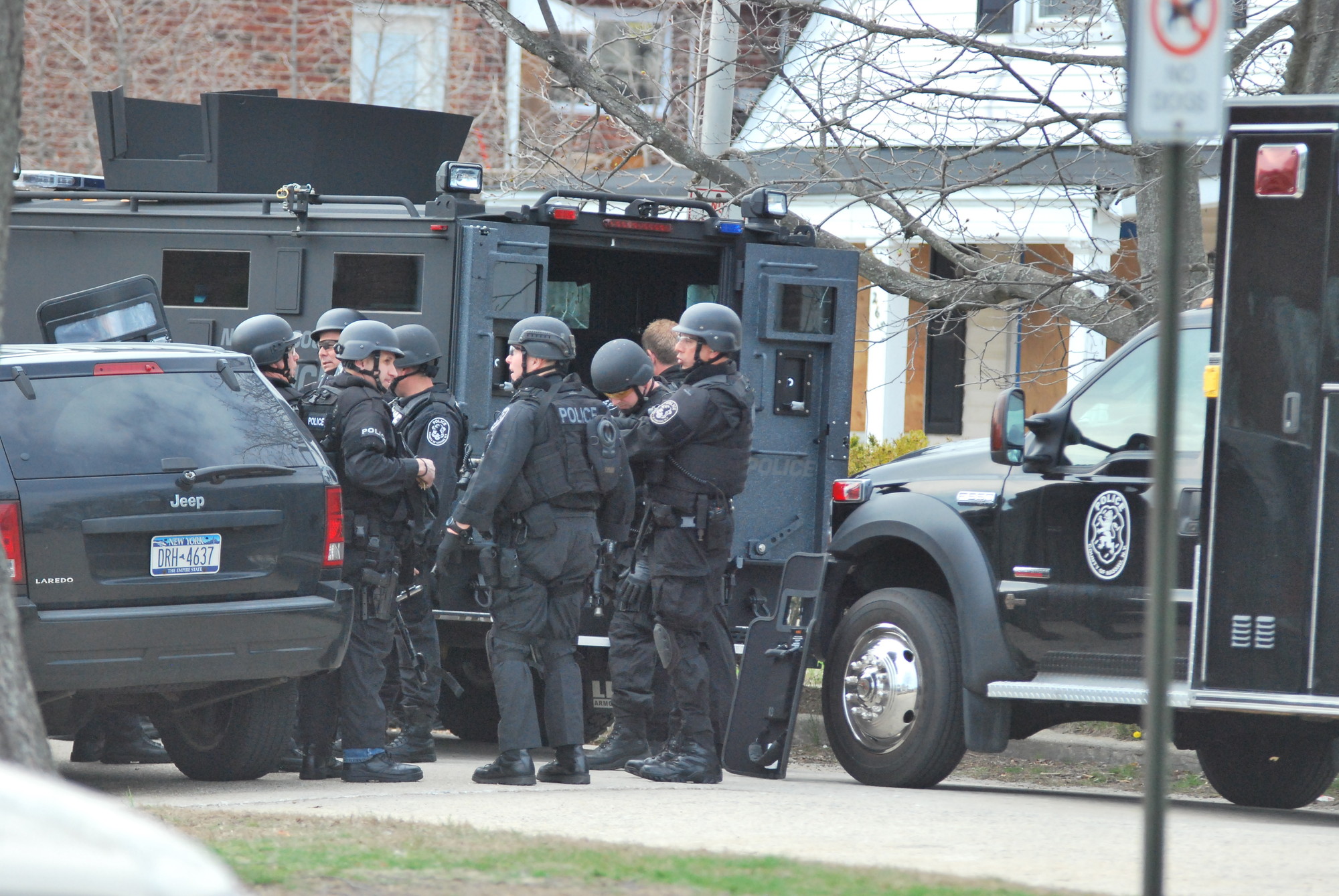 A Nassau County Police Department SWAT team entered a home on Laurelton Boulevard Tuesday after a false 911 call was made to police claiming that a teenager had shot his mother and brother. 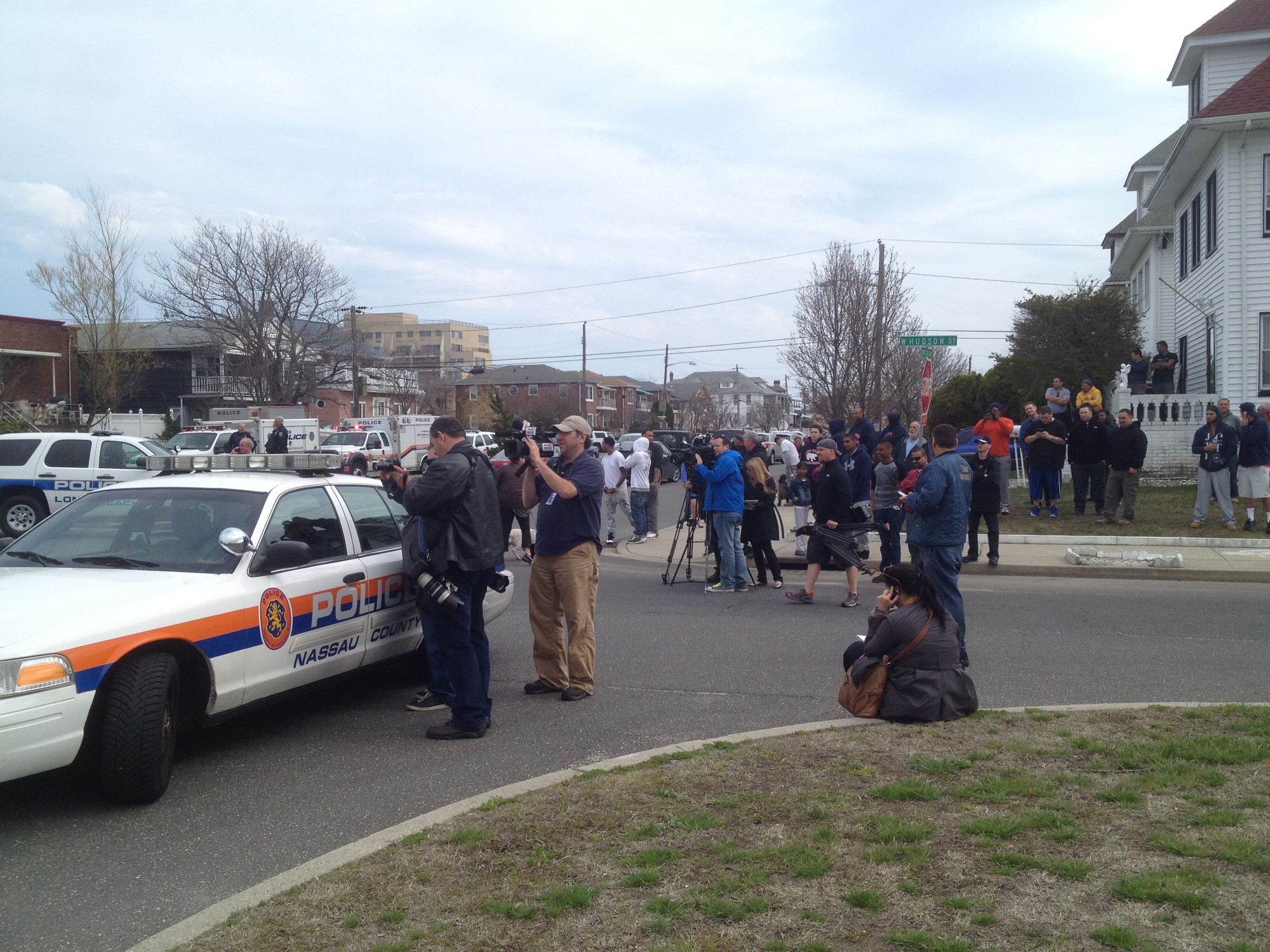 Laurelton Boulevard was teeming with news media on Tuesday, as residents and bystanders milled about near the scene.
Anthony Rifilato/Herald
Previous Next
By Anthony Rifilato

The action became very real for a 17-year-old Long Beach resident who was playing the video game Call of Duty on Tuesday, after a bitter online opponent called police and falsely claimed that the teen had fatally shot his mother and brother in his Laurelton Boulevard home.

Long Beach Police Commissioner Michael Tangney said that the teenager had just won a round of the popular multi-player online game. But when a losing rival claiming to be the teen called police to report the fictional incident, it prompted a massive response — including a fully armed Nassau County SWAT team with an armored vehicle and a helicopter unit — to what was initially believed to be a multiple shooting and hostage situation at the home, north of West Hudson Street.

Tangney said that when police arrived at the house at around 3 p.m., 17-year-old Long Beach High School student Rafael Castillo was still playing the game on Xbox while wearing a headset, and had no idea what was happening outside.

“He was quite stunned — he was very shaken up by it,” Tangney said, adding that the police response could cost roughly $100,000.

More than 50 county, Long Beach and MTA police officers and firefighters responded to the home. Nearby streets were blocked off as police vehicles rushed to scene. The standoff lasted more than an hour and attracted crowds of onlookers who said they learned about the incident on social media.

“I was in shock,” said Scott Rodriguez, who lives next door. “I was hearing all sorts of rumors about a hostage situation and shotguns. It was just insane.”

“I heard it on Twitter,” said Long Beach High student James O’Donohue, who was at the scene with friends after rumors had circulated that their schoolmate had murdered his family. “They tweeted that [police] had the house surrounded.”

Castillo’s mother, Maria, said she was making coffee in the kitchen when she saw police officers outside with their guns drawn, telling her to get out of the house.

“He told me, ‘Go out! Go out!’” she told reporters. “I [said], ‘What happened?’ They said, ‘Somebody killed somebody in your house.’ I told the police my kid’s home, my kid’s on the computer. He don’t know what happened.”

Rafael Castillo’s brother, Jose, 21, had briefly left the house to buy food, and said he returned to see police descending on his home. “I got back, everyone was here,” he said. “I was like, ‘My brother’s inside.’”

After police and Jose repeatedly called Rafael’s phone, he eventually became aware of what was going on. After he came outside, police questioned the family, Tangney said, and a SWAT team could be seen entering the home with guns drawn to conduct a search. The second floor apartment of the two-story home is vacant, Tangney said, but it was initially unclear whether anyone was living there.

“When we extracted [the Castillos] from the house,” Tangney added, “their story was very believable right from the get-go.”

He explained that investigators determined that the call reporting a shooting was a hoax — what’s known as “swatting,” when a gamer falsely reports a serious incident that prompts an emergency response.

“My little brother … has a couple of friends he plays with,” Jose Castillo said. “They won a game, and someone on the other team decided … to get his information — his IP address — and called the cops saying that he killed me and my mom. He didn’t do anything wrong. He’s not even a major gamer — he plays with friends, and someone I guess got mad at him and did this. I asked him … and he said he didn’t know anything.”

While some episodes of swatting have drawn bomb squads and SWAT teams, others may take the form of a single fabricated police report meant to discredit someone as a prank or personal vendetta. “It’s a nationwide epidemic right now, where people play video games, and if you lose the video game, you try to develop information about the person you’re playing, their address and such,” Tangney said. “And then we send this army of police personnel out. In this bizarre world of swatting, you get points for the helicopters, police cars, the SWAT team and the type of entry. It’s very sophisticated, and unfortunately it’s also very dangerous.

Tangney said he believes the rival player managed to obtain Castillo’s Internet Protocol and home addresses during the game. Police do not yet know who the caller was or where the call came from, but they said that he used Skype, the Internet phone service, to make the call to the Police Department’s regular number.

“It comes from an IP — so it’s not immediately traceable,” Tangney said, adding that the gamer could be “anywhere in the world.”

“There is a venue to try to recapture the information or identify the person — we are doing that now — but I’m not going to release the details of the investigation,” he said.

No one was injured in the incident. If the caller is apprehended, however, he will likely face some serious charges, Tangney said, including reporting a false incident.

“If we determine who made this call, there will be an arrest,” he said. “He did something so, so foolish and so dangerous. I’m very angry — it’s a tremendous waste of taxpayer resources. It’s a tremendous danger to law enforcement.”

Tangney said that no charges were filed against Rafael Castillo and that he was not at fault, though his mother said she told him not to play video games as much anymore.

Alexandra Spychalsky contributed to this story.