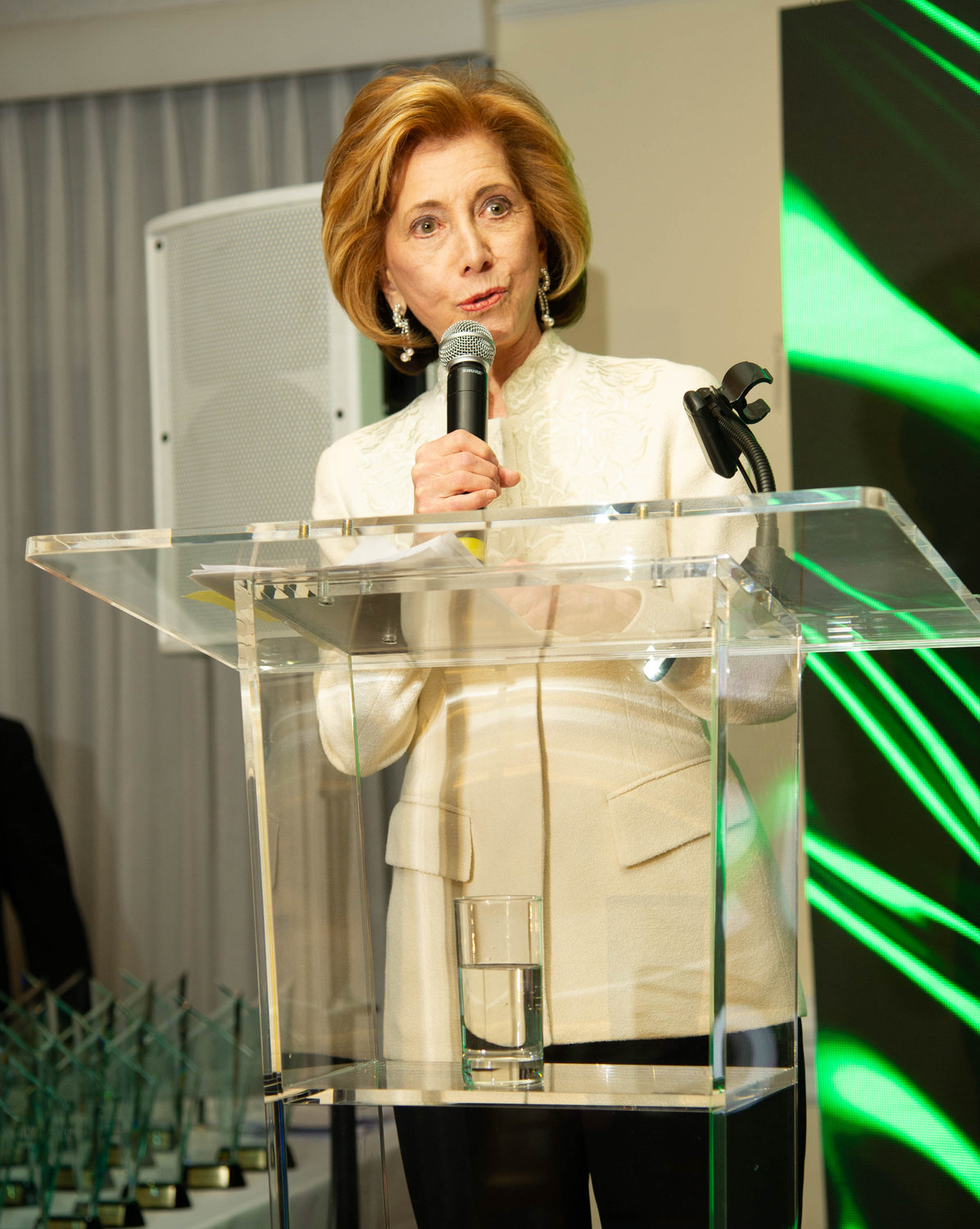 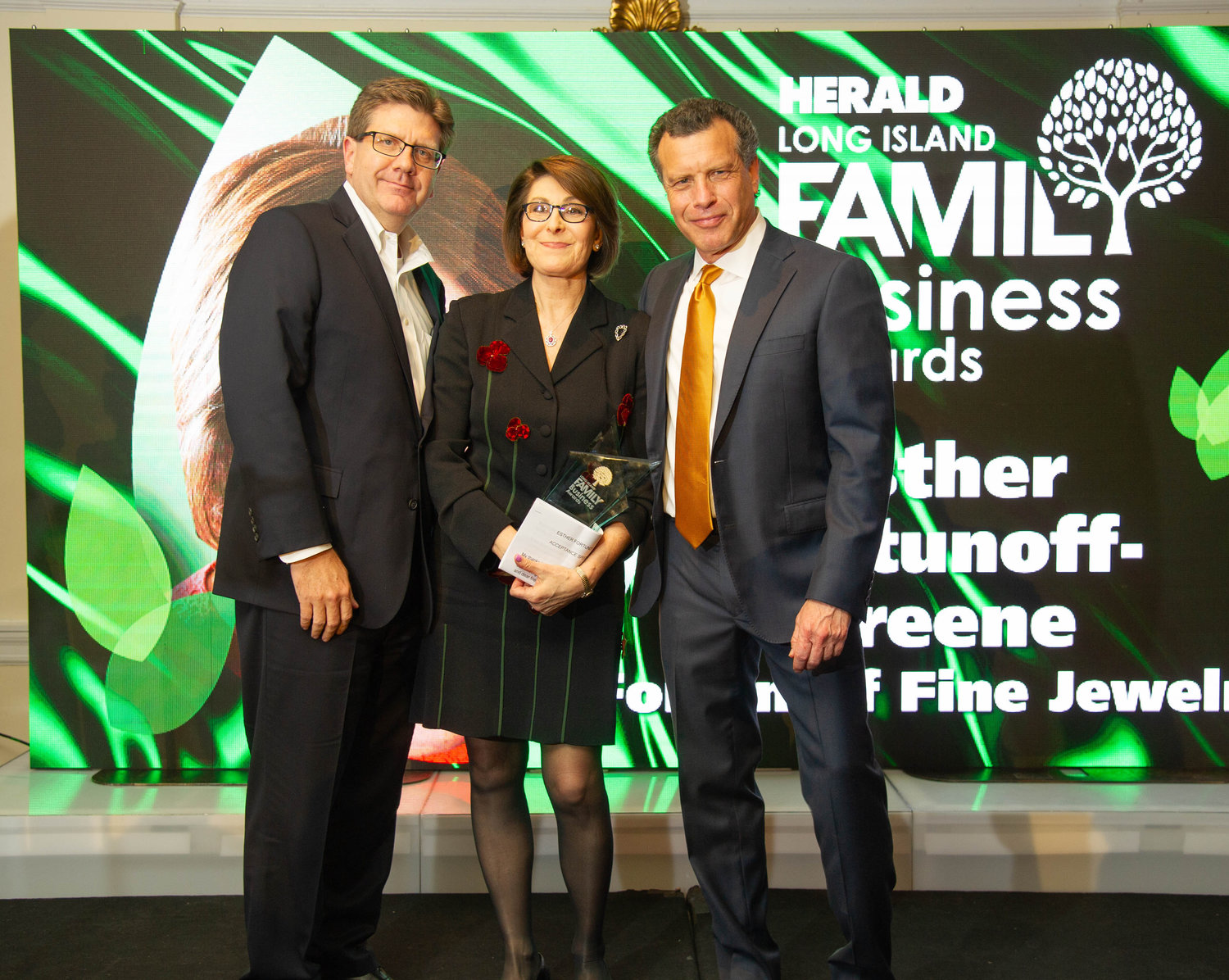 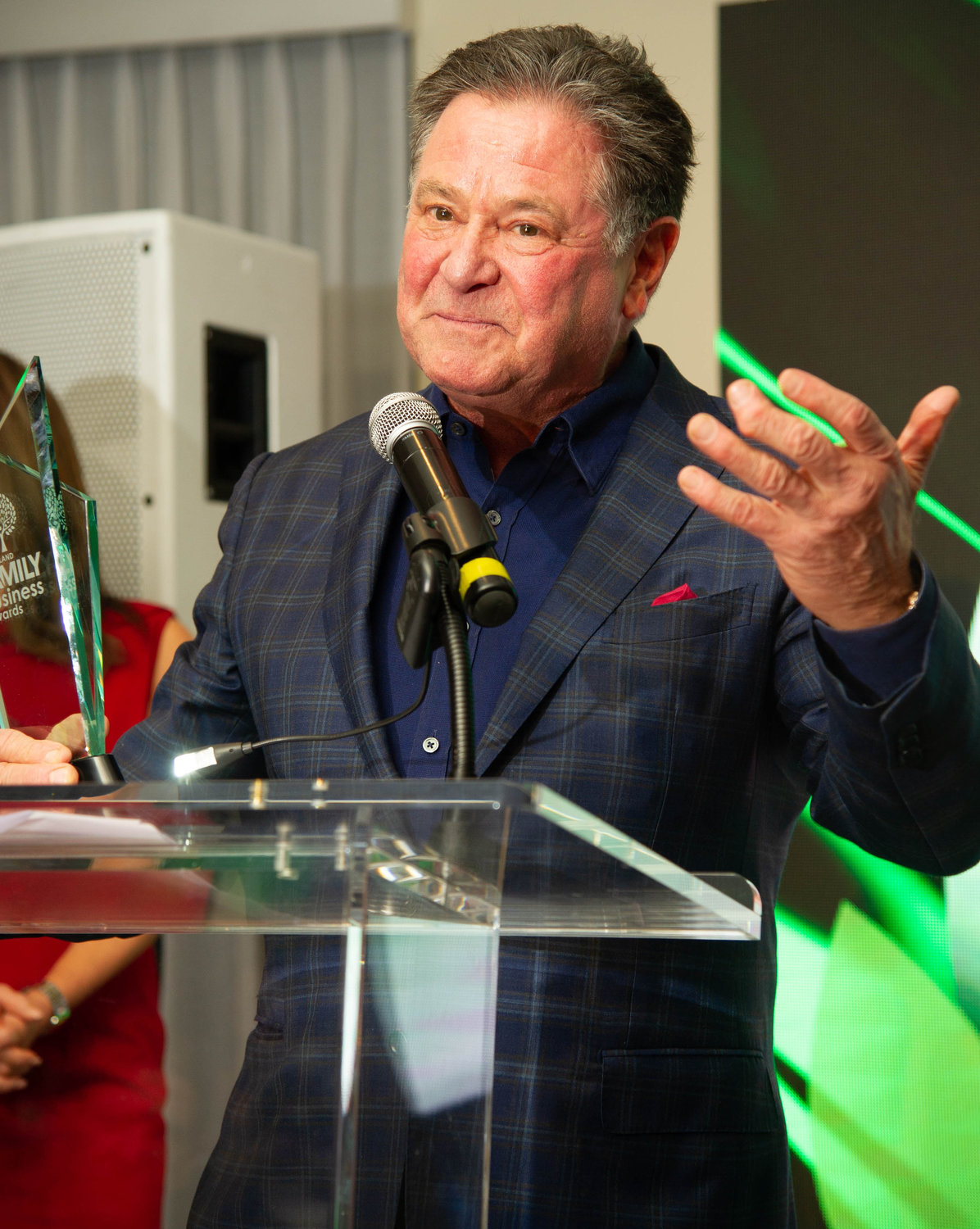 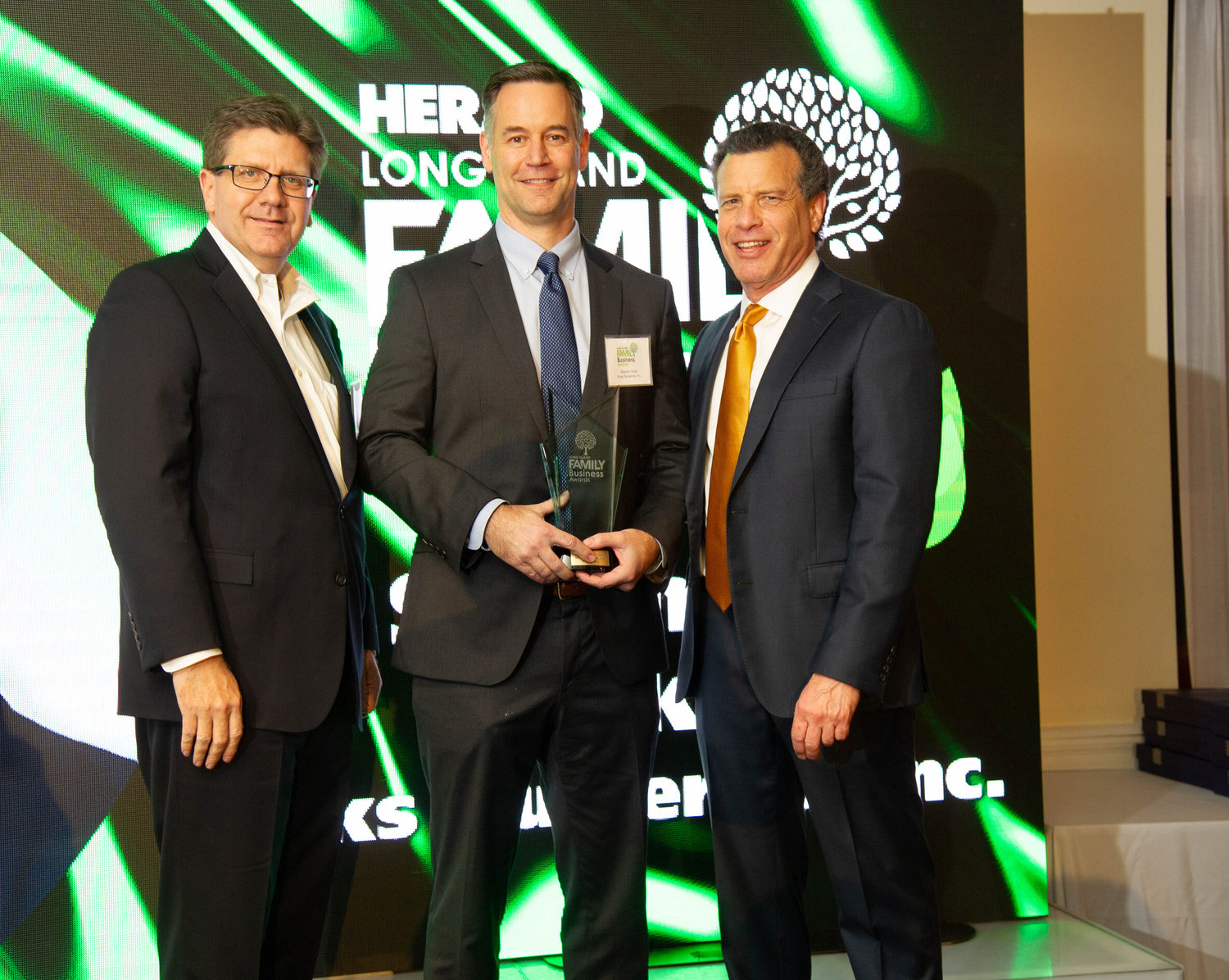 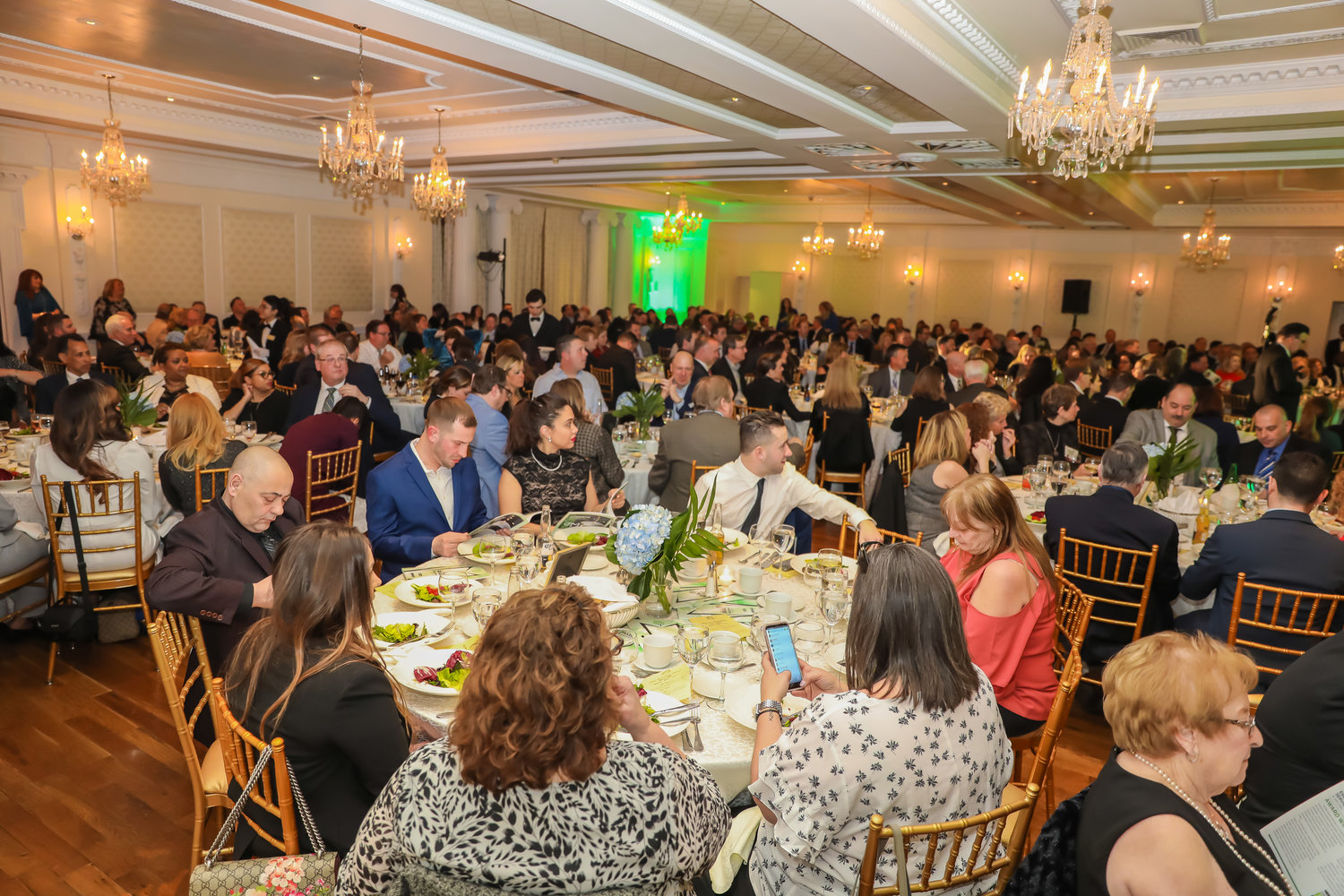 Over 40 family business owners and their families filled the dining room to support their colleagues who won awards.
Previous Next
Family Business Gala Award winners

RichnerLIVE, the events division of Richner Communications and Herald Community Newspapers, hosted over 40 of Long Island’s most successful family businesses.

Managing Partner of Campolo, Middleton & McCormick, Joe Campolo, explained why an event like this matters. “The reason I decided to be a major sponsor is because I thought it was a great idea to highlight family businesses,” Campolo said. “Family businesses are so important since they are the backbone of the Long Island economy.”

The guests began the night with a networking cocktail party, that included a selfie photo booth where honorees could take group photos, along with a silent auction; a portion of ticket sales were donated to EIHAB Human Services, multicultural not-for-profit organization dedicated to serving children and adults with disabilities, intellectual behavioral health challenges, and dual diagnoses with mental health illnesses.

Nassau County Executive Laura Curran expressed her gratitude for the thriving family businesses in the county during the event. “I just want to say thank you to everybody who runs a business on Long Island,” Curran said. “On the county level, we’re working hard to create a more business-friendly environment and we need you all to keep on doing well.”

Guests then proceeded to the dining room for dinner, keynote speech and awards ceremony. Before the awards were presented, Stuart Richner, chief executive officer and publisher of Richner Communications, described what it was like growing up in the family business founded by his parents Robert and Edith in 1964.

“My parents saw school vacations not as a chance to get away from Long Island, but for an opportunity for me to help out at the newspaper with my brothers,” Richner said. “Leading a family business is a privilege that comes with tremendous responsibility. It is often much harder than people realize, but I absolutely love what I do.”

Bernadette Castro, the chairperson for Castro Properties, was the keynote speaker. Castro’s father, Bernard, started the furniture business, Castro Convertibles, in 1931. She acknowledged that growing up in a family business is unique. “Two words I would use to describe family business: not normal,” she said. “Business was always spoken at our home, sometimes nicely and sometimes in a not-so-nice manner depending on what the topic was. First-generation business owners like my father are consumed by their business.”

Accepting his award, Stephen Hicks, president of the Westbury-based Hicks Nurseries, explained how his family’s business, which began in 1853, has stood the test of time.

“One word to describe lasting through four depressions, one civil war, two world wars and 31 presidential administrations is stewardship,” Hicks said. “Each generation has set out to leave the business in a better way than when they found it.”

Legacy award recipient Esther Fortunoff-Greene, owner and president of Fortunoff Fine Jewelry, looked back on how her grandparents in Brooklyn originally started the business in 1922 before opening the Westbury store in 1964. She noted that having the freedom to make decisions in a family business is rewarding.

“What’s great about family business is that you don't have to get permission from senior corporate powers, you can respond to changes and adapt,” Fortunoff-Greene said. “Of course family members have differing viewpoints but that’s what makes it fun.”

Richner Community Award winner Stew Leonard Jr., chief executive officer of Stew Leonard’s discussed how businesses must be able to evolve over time. “My 90-year-old father still can’t believe that 15 percent of our milk sales are from almond milk,” Leonard Jr. said jokingly. “This shows that the milk business is changing just like everything else in business. It’s important to stay in tune to what's going on.”

To end the evening, all the honorees were presented with crystal awards. Master of ceremonies Antoinette Biordi, of News 12 Long Island, introduced the business owners as they walked on the stage to rousing cheers.