Chris Mollica, Rosenthal, and Eleanor shot a scene at the Long Beach boardwalk.
Courtesy In the Garage Productions 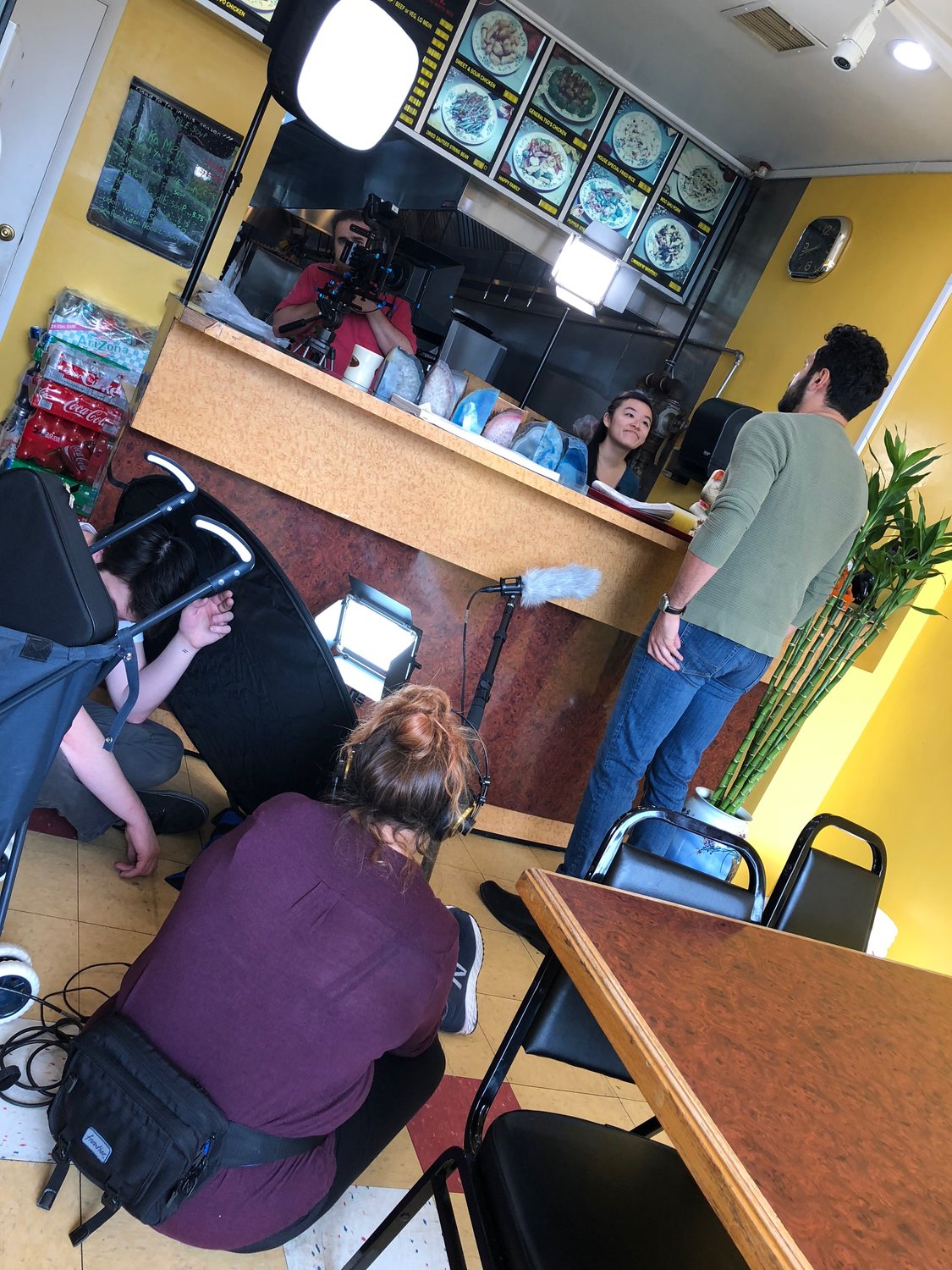 Cast and crew gather at Golden Fortune on North Village Avenue.
Courtesy In the Garage Productions 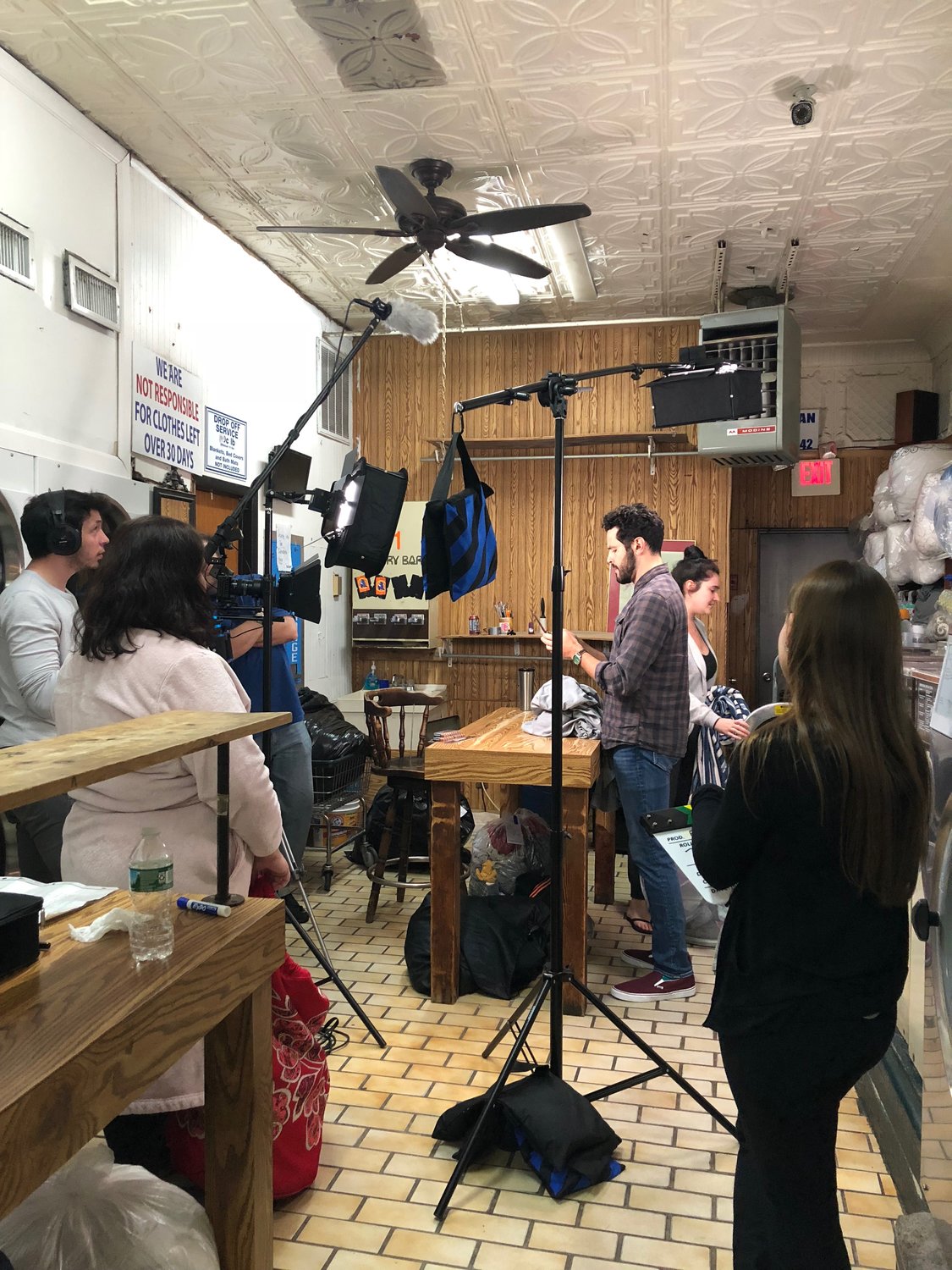 A scene is filmed at Unk's Laundromat on Maple Avenue.
Courtesy In the Garage Productions
Previous Next
By Julia Baxley

Locations around Rockville Centre can be seen on the big screen this summer as the feature film “Family Obligations” plays at festivals across Long Island. The movie, which tells a story of connection and growth, was filmed in the village last fall.

“We wanted this to be a product of where we live,” said Kenneth Frank, who wrote and directed the 82-minute film. Frank lives in Rockville Centre with his wife, Shawna Brandle, the executive producer of the feature, and their two daughters Eleanor and Peppa.

“Family Obligations” has grown from a low-budget passion project to a festival favorite. The feature was selected to be shown at multiple festivals, including the Long Island International Film Expo next month. Held nearby in Bellmore, this festival in particular will reflect the local spirit of the film. Shooting locations included recognizable Rockville Centre and South Shore spots, including Unk’s Laundromat on Maple Avenue, Golden Fortune on North Village Avenue, and the Long Beach boardwalk.

“We’re hoping that the local flavor will appeal to people,” Frank said, “that people would appreciate that we’re doing this here and that we’re part of the local film scene.”

The film is the story of Peter, played by Chris Mollica, who is forced to return to his hometown after his father dies. Peter formerly lived a life of isolation, but realizes over the course of the film that having relationships with people may be more beneficial than he thought. The family-focused message of the film is not just represented on the screen, but is reflected in the founders and creators of In the Garage Productions, the independent studio that produced “Family Obligations.”

Frank and Mollica, who were childhood best friends, dreamt up the studio in their teenage years. After graduating from college, they decided to set their dream in motion. Their team expanded when Frank married Shawna, and she and her sister, Brett Brandle, became involved in the company. Brett then married Mollica. Frank and Brandle’s daughter Eleanor played the role of Mia in “Family Obligations,” and the family’s apartment building, the Rockville Tudor, was used as the location for the apartments in the film.

Frank, Shawna, Mollica, and Brett filled different roles during the film’s production, serving as producers, editors and sound recordists. The other crewmembers had a variety of jobs as well, with “everybody doing everything,” according to Shawna. With an eight-day shoot and a budget of $16,000, the festival selection has been an impressive reward for considerable labor.

“It’s endlessly exciting,” Mollica said. “All you want from any piece of art is for people to see it.”

“Family Obligations” premiered at the Art of Brooklyn Film Festival on June 6. At a question session after the showing, Frank spoke about his inspiration for writing this particular story.

“There’s a Peanuts strip that came out two weeks before I was born,” Frank said. “Charlie Brown gets a phone call. He finds out Snoopy got in trouble and he has to get him. His sister says, ‘That beagle’s more trouble than he’s worth,’ and Charlie Brown says, ‘Most of us are.’

“People are high maintenance, difficult, and you will give more than you get back, so therefore it is very easy to choose not to engage,” he continued. “And so I wanted this to be about someone choosing to engage.”

The feature will be screening at the Long Island International Film Expo on July 12. Tickets can be purchased at longislandfilm.com.