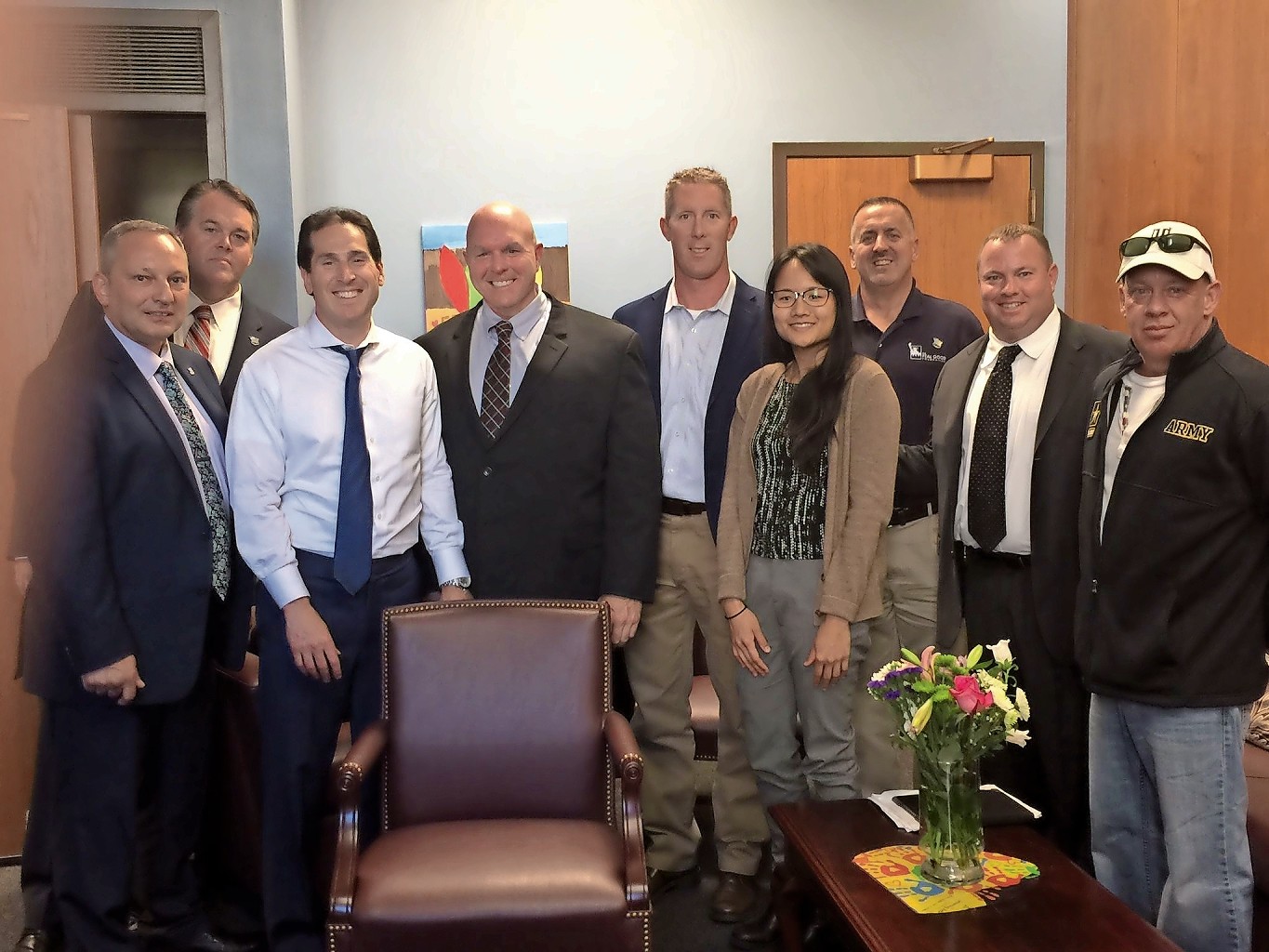 After the second plane slammed into the south tower of the World Trade Center on Sept. 11, 2001, New York City Police Officer Chris O’Connor tried to evacuate the area. With his back to the towers, he surveyed the crowd, urging people to quickly cross the street. They were looking at the sky.

“I just remember seeing everyone’s face was sheer terror at once,” O’Connor recalled. A man yelled at him and his partner to run. “We turned, and your legs are already moving.”

The south tower was collapsing. “We probably came within 100 yards of getting flattened,” he said. “. . . Every year, you think of it. You [feel] lucky, because you know how many guys were in there that didn’t get a chance to run.”

A Rockville Centre police officer since 2002, O’Connor’s memory of that day isn’t all that stayed with him. At 46, his health problems — which he says stem from the toxic air he breathed that day and in the months afterward while working in the “hot zone” during recovery efforts — has had a debilitating effect.

He has had six sinus surgeries since 2014, most recently in May. He had his gallbladder removed in 2008, and right now walks in a fracture boot due to three tumors in his left foot. Though doctors said the tumors appear to be non-cancerous, he told the Herald last week that he was planning to get a second opinion at Memorial Sloan Kettering.

O’Connor recalled running out of the smoke and dust after the south tower collapsed and reaching a street with clear air. “But then it would come over the buildings and come down on you again,” he said. “As you were running, you were getting hit with waves of dirt and debris.”

Though assigned to the anti-crime unit in the 28th Precinct in Harlem at the time, O’Connor was in the area testifying in court on the morning of Sept. 11, and as a then Suffolk County volunteer fireman, he helped New York City firefighters in any way he could after evacuating the area. He was intermittently sent to ground zero to secure the area for about three months after 9/11 as the rescue and recovery efforts continued, sometimes doing 16-hour shifts.

Working on and off for the last several years for the Rockville Centre Police Department due to his many health issues, O’Connor said he has been on constant sick leave for the past year. A state bill, passed last year, that provides paid medical leave to active police officers, firefighters and other first responders employed by state and local governments who worked on the rescue, recovery and cleanup after the World Trade Center attacks has helped him as he figures out the next steps.

State Sen. Todd Kaminsky championed the bill, and Gov. Andrew Cuomo signed it last September. “They’re still on the front lines,” Kaminsky said of officers like O’Connor. “These are not guys who want to go away. They’re still out there protecting communities. . . . It was not a one-day catastrophe. It continues to have tragic consequences.”

O’Connor previously told the Herald that the state bill could not have come at a better time, noting that he was running out of sick leave. “In the meantime, at least it’s one thing I don’t have [to] worry about,” he said last week. “Senator Kaminsky’s my hero.” He added that he applied three years ago to the state’s Police and Fire Retirement System, but was denied. He has filed an appeal.

Rockville Centre Police Commissioner James Vafeades noted that officers who were members of the NYPD during 9/11 comprise about 20 percent of the 56-member department.

“We completely support these guys. Everybody respects the first responders, and some paid a higher price than others, unfortunately,” he said. “Inside our building, everybody knows what Chris is going through. We all support him and do anything we can to help him.”

The village is set to hold its 17th annual Sept. 11 ceremony on Sept. 16 at 7 p.m. on the Village Green, at the corner of Lee and Maple avenues. O’Connor, who lives in Suffolk County, said that he attends the Sept. 11 ceremony at the 9/11 Responders Remembered Park in Nesconset each year, during which the names of the first responders who died that year are read aloud.

The park includes a wall with the names of the fallen responders, he said. It grows each year as those with complications from the tragic day and its aftermath die.

“You feel the power that these friends of yours aren’t here, and you have health problems,” O’Connor said. “You wonder when your name’s going to go up on the wall. You hope it doesn’t.”