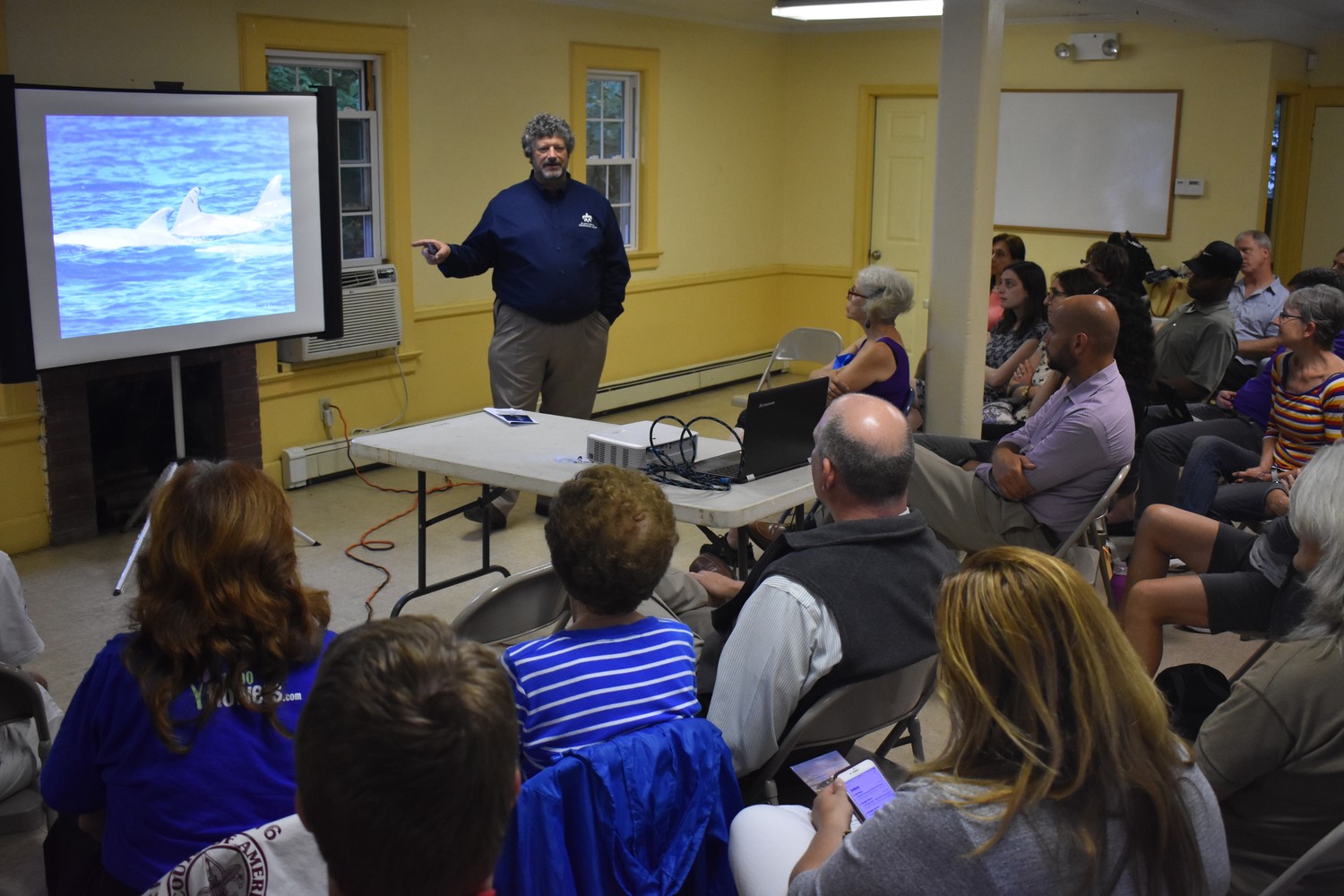 Rob DiGiovanni, a founder and chief scientist for the Atlantic Marine Conservation Society, led a discussion about threats to Long Island’s marine life at the Tanglewood Preserve Nature Center on July 30.
Ben Strack/Herald
By Ben Strack

A talk at Rockville Centre’s Tanglewood Preserve Nature Center on July 30 about Long Island’s marine environment and the human-induced threats to animals was the latest example of a plastic pollution awareness campaign that has been brewing in Rockville Centre.

All Our Energy, a non-profit that advocates, educates and empowers the public to act on environmental issues, invited Rob DiGiovanni, a founder and chief scientist for the Atlantic Marine Conservation Society for the two-hour discussion.

The Society responds to calls of often-dead marine life that wash up on Long Island’s shores and study the animals to discover what caused the death and how, if at all, the death could have been prevented.

DiGiovanni noted the increase in sightings of whales, seals and sea turtles around Long Island. Last year, the group responded to 66 sea turtles, 53 cetaceans (whales, dolphins or porpoises) and 41 seals that washed up. He noted that 18 percent of the sea turtle deaths last year were found to be human-induced — from boat strikes, entanglement or ingesting plastic, for example — along with 17 percent of whale deaths and 2 percent of seal deaths.

“Everybody feels that they need to see that big gory number to move people into action,” DiGiovanni said. “…What I realized is people care a lot more than what we gave them credit for.”

He also noted the amount of marine debris in local waters. A plastic bag was found in the stomach of a leatherback turtle that washed up in Southampton this summer, he said. The Society discourages the use of single-use plastic bags and bottles.

“This isn’t a gotcha kind of game,” DiGiovanni said. “Once somebody does wrong, it’s not about saying this is what you did wrong. It’s really a matter of let’s not make it worse.”

The event came in the midst of a recent push in Rockville Centre to reduce plastic-bag pollution. On July 23, the John A. Anderson Recreation Center hosted a free screening of “Bag It,” a 2010 film about the impact of plastic bags and other consumer materials on land and marine ecosystems.

Public viewings of “Bag It” have been a tool to increase awareness in other communities as well, including Sea Cliff, Lynbrook and Long Beach. The latter became the first municipality in Nassau County last year to implement a fee on single-use plastic bags.

“The Board is waiting for the state to put out a statewide law,” Rockville Centre village spokeswoman Julie Scully told the Herald in May.

Still, George Povall, executive director of All Our Energy, said they would continue rallying for a local measure by holding events and collecting petition signatures. He added that the group has spoken to 260 Rockville Centre merchants, and that only two showed opposition to plastic bag fees or urging people to use reusable bags.

“We feel that it’s a matter of time before [the village] might feel comfortable enough that enough people support something like that,” Povall said.

Nearly 12.3 million plastic bags are used annually in Rockville Centre alone and less than 5 percent get recycled, according to a sign displayed on the sign-in table at the July 30 discussion, which Povall said is based on conservative Environmental Protection Agency estimates.

“Once you get into the habit, it’s really, really easy,” Povall said of using reusable bags. “It’s such low-hanging fruit on the environmental action that you can take, but it really does make a big difference.”