Board of Education approves changes; officials work to implement for 2019-20 year 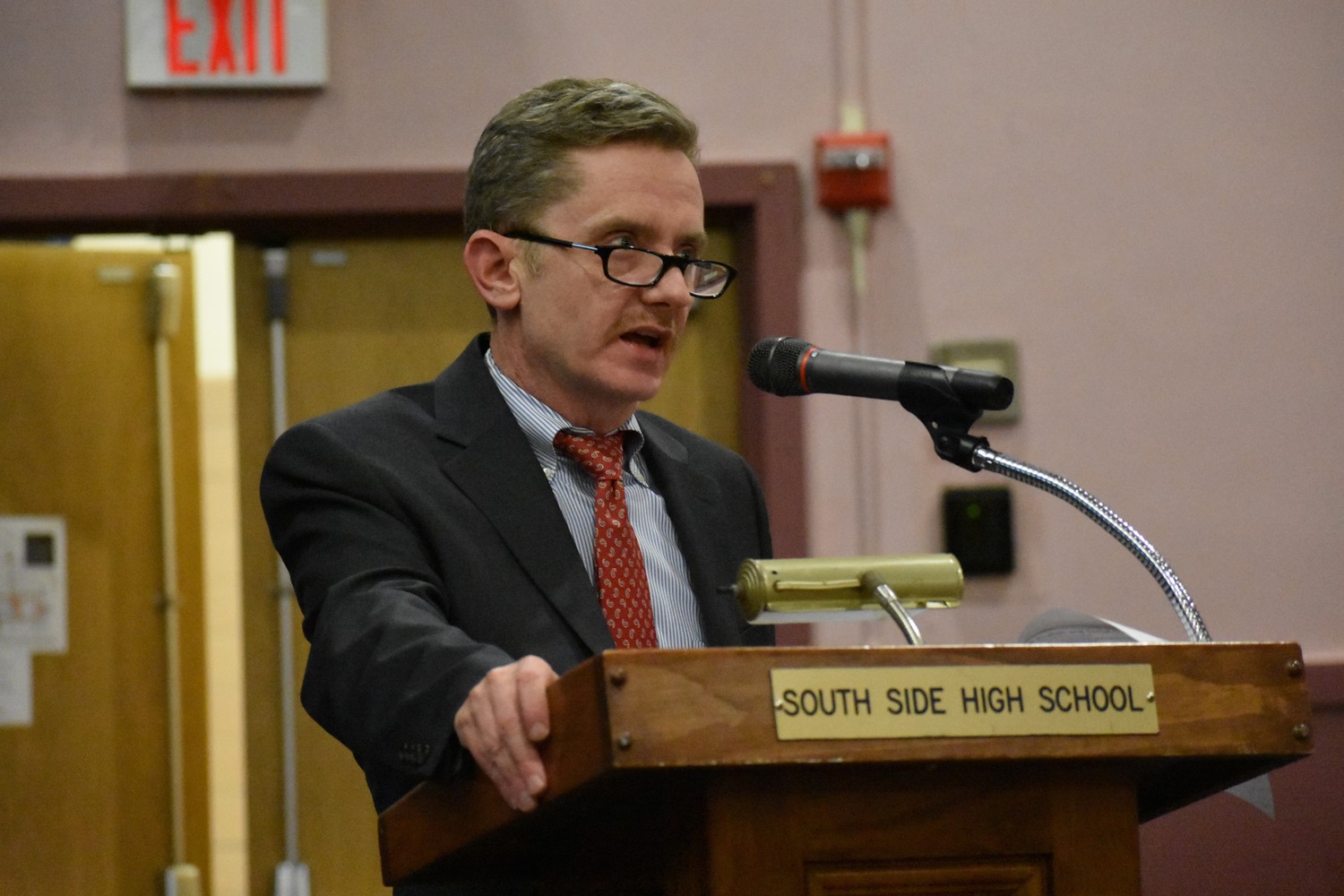 South Side High School Principal John Murphy said the school district was working hard to ed-ucate students while not overworking them.
Ben Strack/Herald 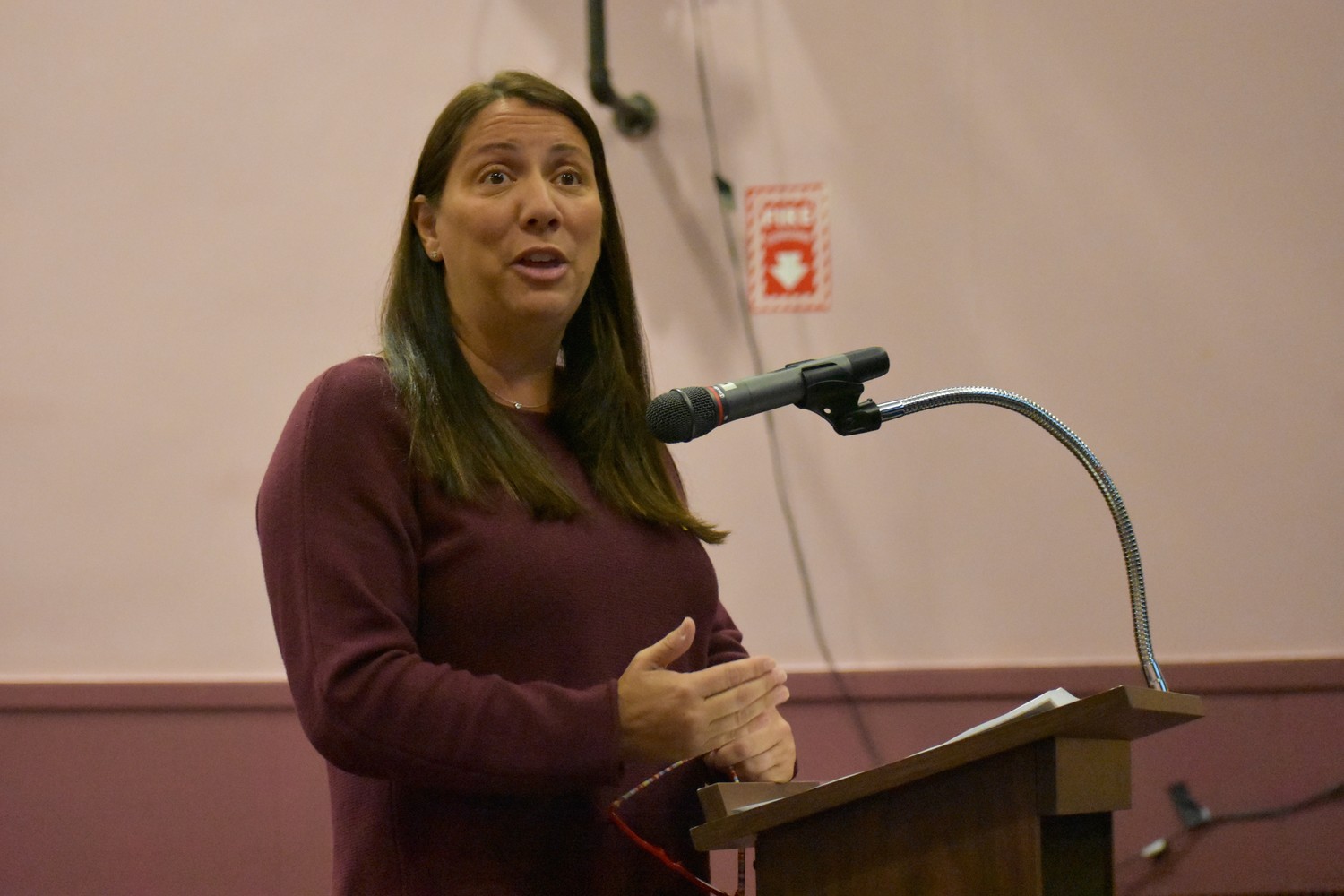 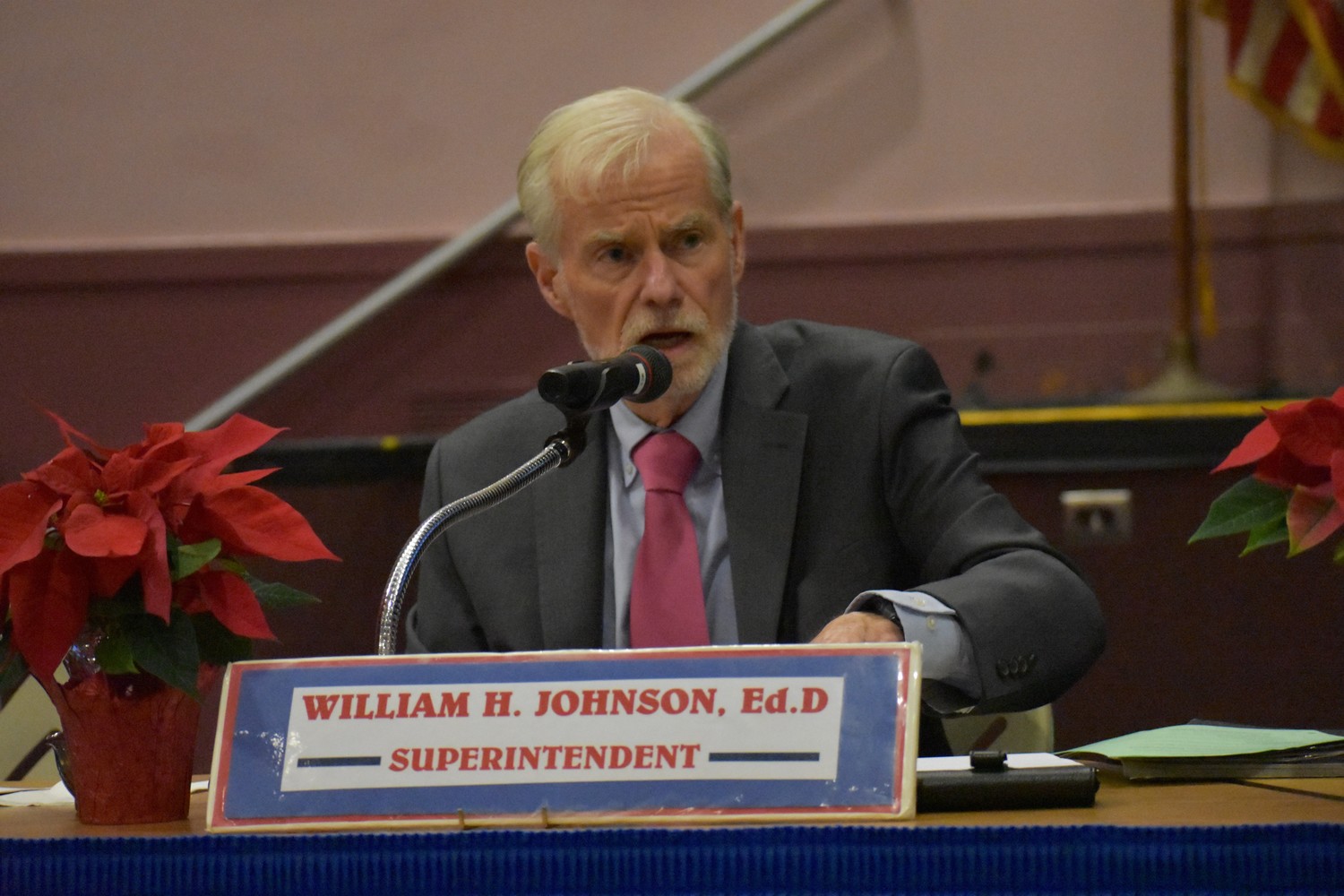 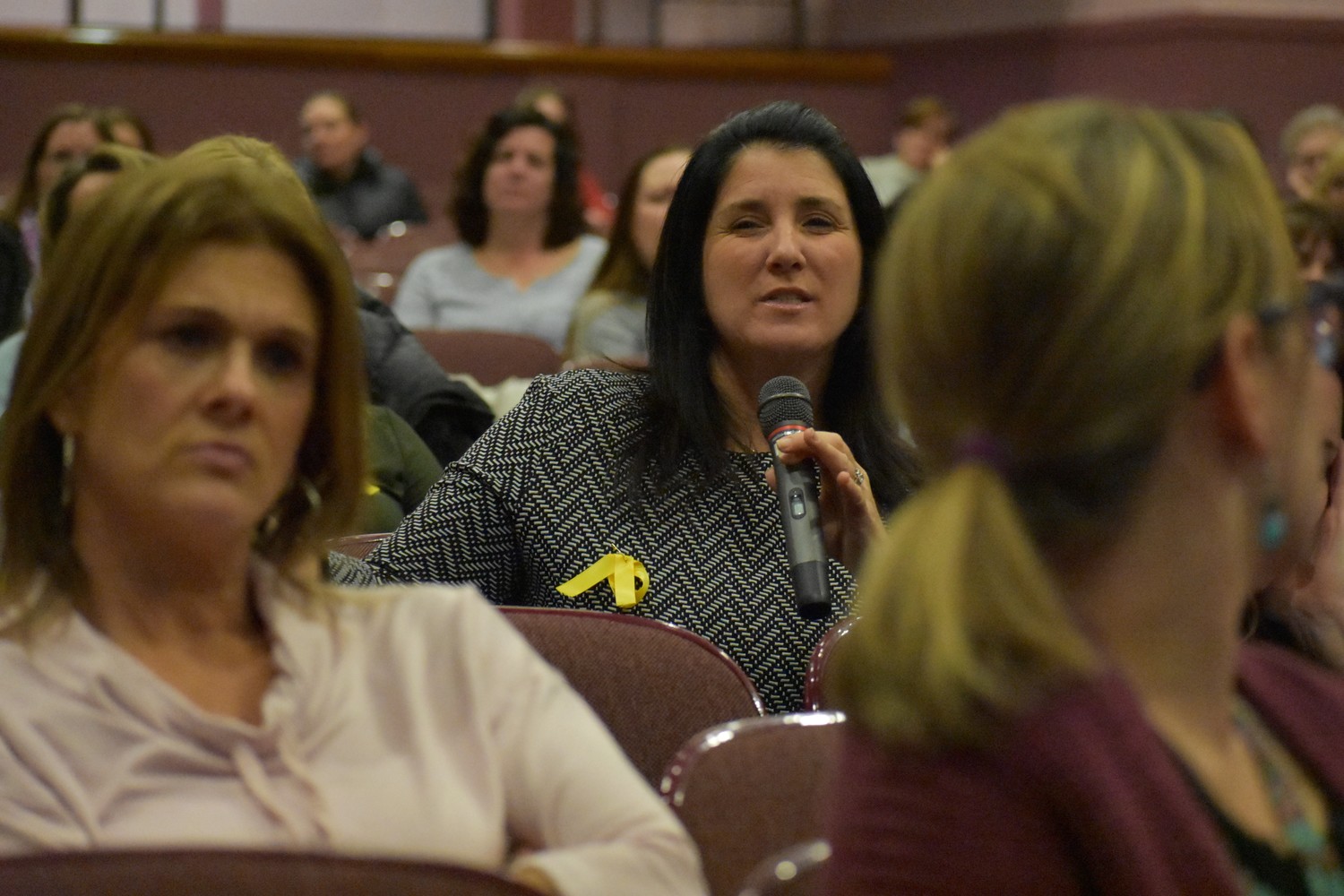 Karen Burgie, holding microphone, a Special Education Partners representative, was among dozens of parents at the Board of Education meeting on Dec. 5.
Ben Strack/Herald
Previous Next
District to bring back Core II program

In addition to offering South Side High School students a choice to take Regents- or I.B.-level English and history in co-enrolled courses, the district is also reinstating a CORE II program for students with severe learning disabilities.

The proposal came after parents told school officials at past meetings that their children did not need all of the support provided in the district’s CORE special-education program, but that navigating certain courses with general-education students was “beyond daunting.”

The Committee on Special Education must recommend students for the program, which is to consist of classes of up to 12 students. A special-education teacher with a dual certification would work with a teaching assistant to teach Regents-level curriculum to students in grades nine through 12.

Students in the CORE II program would be integrated into general-education classes if appropriate, as determined by CSE, school officials said at the Dec. 5 Board of Education meeting. The program would address their specialized instruction and transitional needs, according to Dr. Noreen Leahy, assistant superintendent for pupil personnel services and special education.

“It would offer a certain subset of students the opportunity to earn a diploma in a special program,” she said, noting that it would provide them a pathway to earn their diploma through the Career Development Occupational Studies, or CDOS, credential.

“I think it can be a life-changing alternative for a handful of students,” said Karen Burgie, a SEP representative. “I’m so excited for those families who will get to have that as an option for their kid.”

The Rockville Centre Board of Education supported a plan put forth by administrators last week that would create special classes for South Side High School students with severe learning disabilities and offer a modified version of International Baccalaureate courses that students are currently required to take.

Parents of special-education students have expressed concern at forums over the past year that children were “falling through the cracks” in what some have labeled a “one-size-fits-all” curriculum. Specifically, they voiced opposition to the district’s requirement that all students take International Baccalaureate English and history courses in 11th and 12th grades, arguing that many students with disabilities cannot handle the workload in these “advanced” classes.

Current South Side sophomores will now have a choice when selecting their history and English classes next year as part of a plan to alleviate those concerns. “What we’re going to look to do is a complete curriculum rewrite in these courses, utilizing history teachers, ELA teachers and special-education teachers working together,” Dr. Chris Pellettieri, assistant su-perintendent for curriculum and instruction, said during the Board of Education’s meeting on Dec. 5.

The proposal, which the board approved, includes making the I.B. English and history courses into a class in which Regents and I.B. students can be co-enrolled. Both courses, to be held in the same classroom, would prepare students for the Regents exams taken at the end of 11th grade, but assignments, assessments and instruction would be differentiated based on which difficulty level the student chose. Separately, the district is planning to create a CORE II program for students with serious learning disabilities.

South Side Principal John Murphy noted that the International Baccalaureate, an education foundation based in Switzerland, is modifying its workload for the 2019-20 school year, which includes reducing the number of formal written assignments from four to one during the two-year course of study.

“But that’s not clearly enough; this is a multi-pronged approach to a very complex problem,” Murphy said, noting the Rockville Centre-specific changes. “. . . It’s an imperfect science. There’s a lot of different various factors in place, but the intentions are pure.”

Donna Downing and Sue Quilty, co-presidents of South Side’s Parent Teacher Association, told school officials that they believed the co-enrollment in 11th grade was a “positive step,” but asked the district to give students the option to instead take an elective during their senior year to satisfy the English requirement.

Others echoed that call, while also thanking the district for proposing changes. “My son comes home every day from school; he hates it, and that’s sad to me,” Denise McNicholas said at the meeting. “By 12th grade, if you’re not succeeding, let’s give them a break. . . . It’s just too much.”

She agreed with McNicholas, however, that students should not be forced to take the co-enrolled class, which she called “a diluted I.B. class,” as seniors, noting they could benefit more from electives such as public speaking and creative writing. “I know that our administration has great passions for ELA and for this I.B. program,” Peder-sen said, “but sometimes it’s your passions, and it’s not our students’ passion.”

She and others also advocated to have a special-education teacher in the co-seated class every day, instead of every other day. “I think we’re going to have an awesome program when we’re done with this and after a few years of tweaking it,” Pedersen said, “so thank you for the time and effort you’ve put in.”

Board of Education President John O’Shea said the board was not ready to decide on co-enrollment in 12th grade, but encouraged administrators to move forward with conversations and curriculum rewrites to implement the Core II program and 11th-grade co-enrolled class next September.

Others questioned the structure of one classroom that caters to students learning at two separate levels. Erica Messier, a middle school history teacher, said the district was doing a disservice to all the students in the class, noting that I.B. students, for example, are being put into a “Regents confine.” “It seems like by creating this one-size-fits-all class, you’re actually teaching to no one,” she said.

Schools Superintendent Dr. William Johnson noted that the district’s integrated system was developed based on what school officials observed to be most effective over time, and said it is a common misunderstanding that teachers have to “teach to the middle” in co-enrolled classes. “That’s one of the things that we’ll be working very assiduously at making sure does not happen.

“. . . When you separate them, they tend to behave like everybody else in their class,” he added. “When I integrate them, and each class looks like the entire community, they learn to be better than they might have been otherwise.”

Zachary Richner, who graduated from South Side High School’s I.B. program in 2005, started a petition on Change.org last month in support of ending the requirement for all students to take I.B. English and history, which 451 people signed.

“I think there’s a long way to go to implementing a policy that really does foster the individual talents of all students,” Richner said in a phone interview after the meeting, adding that he was pleased the district took action. “That’s what we’re all trying to do.”

He noted that he was encouraged to see the community, especially alumni who experienced the I.B. program first-hand, speaking out to effect change. “There’s still a lot of unanswered questions,” Richner said, “but I have confidence that the administration understands where the community is coming from and is certainly committed to putting forth proposals that are best for all students.”

Richner is a son of Herald Publisher Stuart Richner.

Johnson said that rewriting curriculum for the co-enrolled English and history classes would likely take about six months, and that teachers would complete professional development to prepare to teach the courses. The plan, he noted, brings together the idea of integration while also answering the community’s call for the students to have a choice.

“We’re going to try to do both,” Johnson said. “We’re going to monitor it extremely carefully next year. We will continue to engage people in the conversation.”