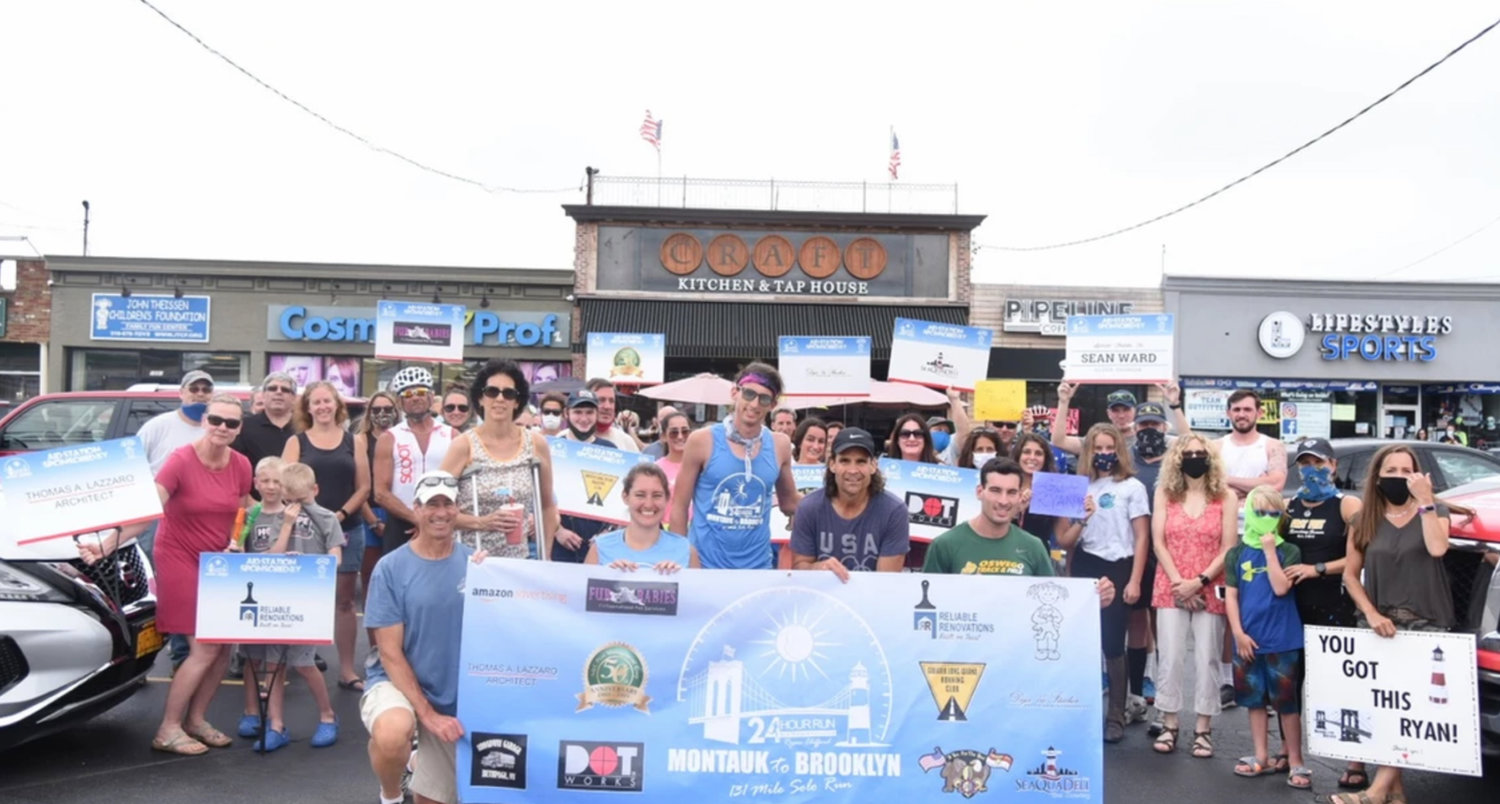 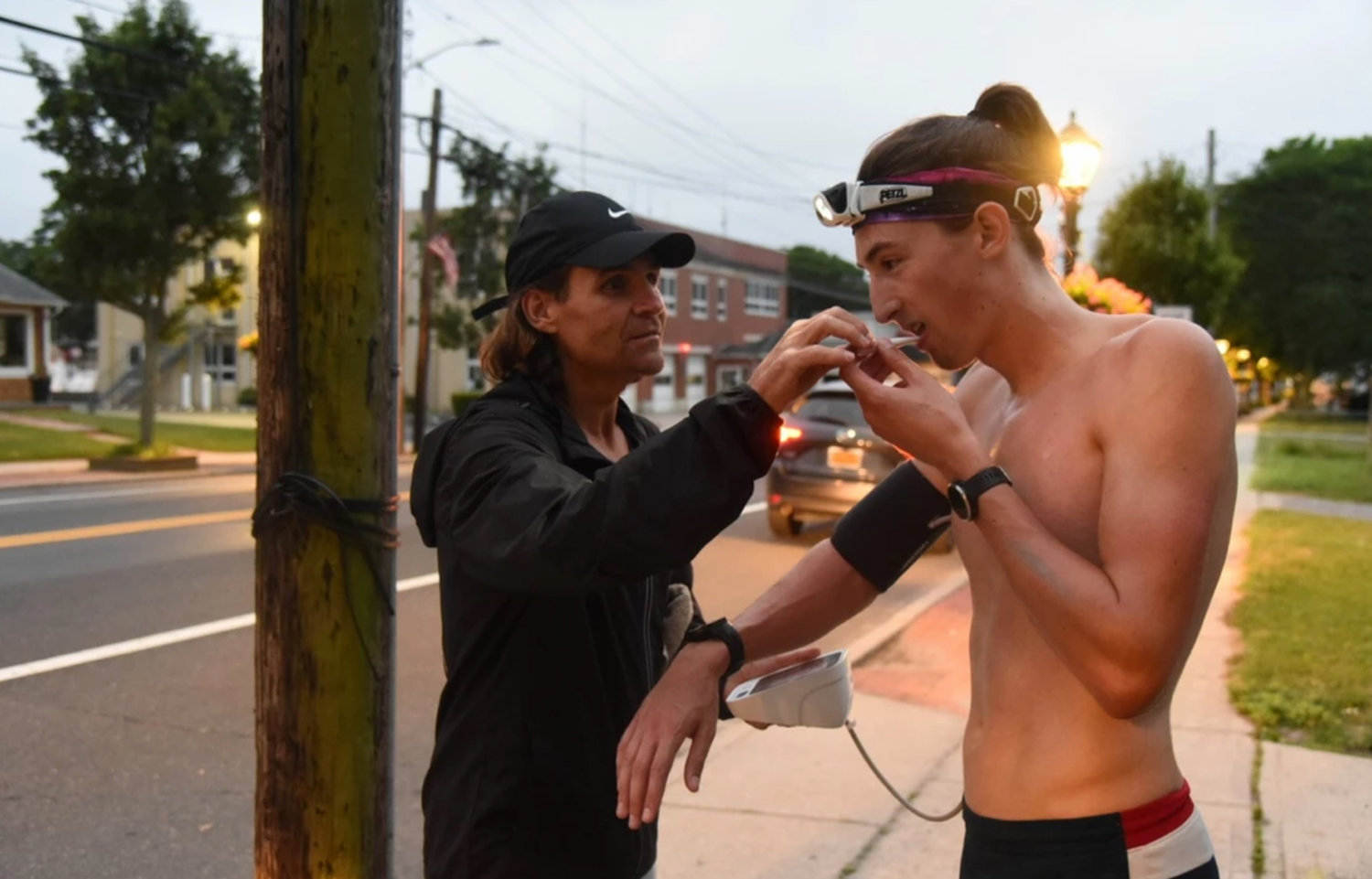 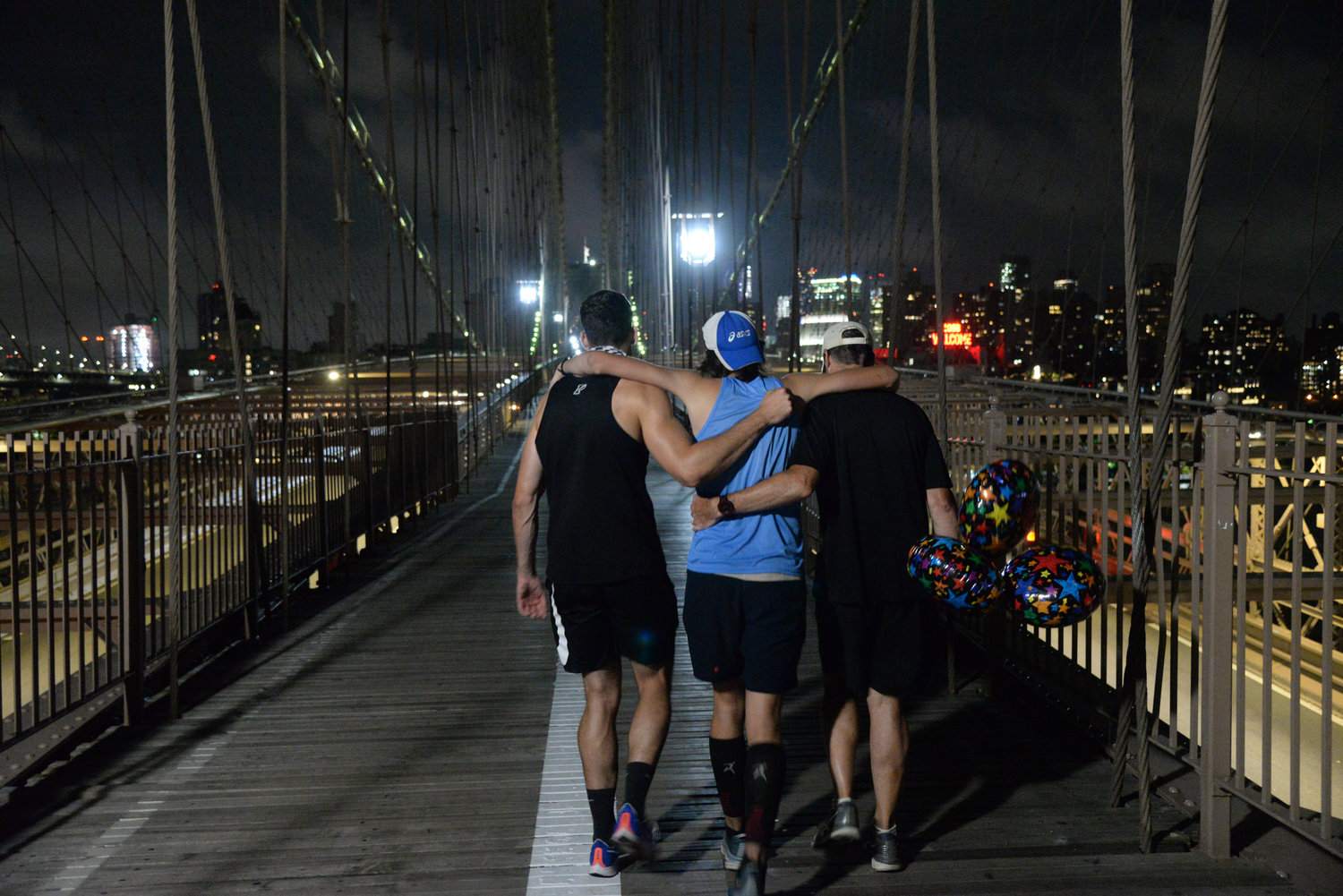 Clifford’s family helped him cross the finish line on the Brooklyn Bridge late Tuesday night.
Courtesy David Conn
Previous Next
How to contribute:

“Donate” tab. There is no minimum donation.

Just after midnight on July 7, Ryan Clifford steadied himself against the Montauk Point Light House with one hand as he limbered up for a feat no Long Islander had accomplished before.

Clifford, 23, of Seaford, was about to embark on an ultra-marathon — but not just any ultra-marathon. This would be the longest race he had ever run, by more than 50 miles. Clifford is a former cross-country and track athlete at Mansfield University in Pennsylvania, and a current graduate assistant cross-country and track coach at Minot State University in North Dakota. He was a standout athlete at General Douglas MacArthur High School. Running is anything but new to him, but this challenge was.

In fact, no one had ever attempted it, according to Clifford. That day, he started and finished a 131-mile run, from Montauk Point to the Brooklyn Bridge, in 21 hours, 47 minutes, 52 seconds, running the length of Long Island to raise money for a local charity.

The idea was Clifford’s own, generated in the interest of philanthropy and nurtured by a relationship with a friend from his hometown. “I met John well over 10 years ago, when he was very involved in the Long Island running community,” Clifford said of John Theissen, who created the John Theissen Children’s Foundation. “We would compete in races when I was younger together. My parents came to races . . . and we formed a good relationship. I helped him when he needed help, especially during the holiday season toy drive.”

Clifford said that he and Theissen, who’s now 49, built a rapport when Clifford ran in local 5K’s, such as the Seaford Hot Chocolate 5K. “I would start to beat John in races around [age] 13,” Clifford said cheekily. “He always got a little mad, because I wore a goofy hat, and he would wonder why the kid with the goofy hat was running past him.”

Clifford’s respect for and adulation of Theissen gave him the idea for his very long run. “He always wanted to do the full length of Long Island,” Theissen said. “He was passionate about it but moved out of New York. Then he contacted me before Covid-19 and said he wanted to do it in the summer, and I said, ‘Let’s promote the hell out of this.’ Then Covid-19 hit. I hadn’t spoken to him in a couple months; I didn’t want to put him in harm’s way. Then, three weeks before the race, he said ‘Let’s do this.’”

Theissen has appreciated Clifford’s running skills since Theissen hosted children’s runs, which Clifford would typically win. “He didn’t like medals — he liked plaques,” Theissen recalled. “Every year I would get a custom-made plaque specifically for him, because I knew he was going to win.”

Clifford said his idea to run the length of Long Island was inspired by a similar effort Theissen made in 1999, running 103 miles from Newbridge Park, in Bellmore, to Montauk Point.

On July 7, Clifford pushed off the lighthouse and set out with a loping stride toward Kings County. On Montauk Highway, he made his way along the South Shore in the early hours.

“Honestly, the first eight hours, I knew I had to get a lot of miles in, because it was the coolest part of the day,” he recounted. He pushed himself for 46 miles straight without walking. By mile 53, after 11 miles or so of what he described as “dark times,” he was feeling the effects of the ultra-endurance challenge.

Clifford stopped at the headquarters of Theissen’s foundation in Wantagh, which he said gave him a boost. Accompanying him along the way were a few close friends, one of them Theissen, who took his vitals every 10 miles.

Clifford was experiencing hypotension, dangerously low blood pressure. He was also suffering from severe stomach cramping and pain, and vomiting. To keep him from fainting, Theissen fed him potato chips in a support van to increase his salt intake.

After recovering for about fifteen minutes Clifford refocused on his journey, and the last 16 miles proved to be special for him. “I was rolling along the hills on Jamaica Avenue and Myrtle Avenue, and you could see the Manhattan skyline. My sister was on a bike with me as well, saying I had to drink water. I just kept looking at the skyline,” he said later. “I had bikers and runners with me randomly along the way, but in the last 16 miles I had my brother join me for eight, and then my dad for the last eight. It was cool for my family to bring me to that finish line.”

Clifford finished at the Brooklyn Bridge late that night, having run 111 miles, walked 20, averaged 9:59 per mile and, as of press time, raised around $10,000 for Theissen’s foundation.

“He finished, and he finished hard,” Theissen said. “He almost sprinted up the bridge to the other side.” Then he added of his friend, “I never doubted him.”