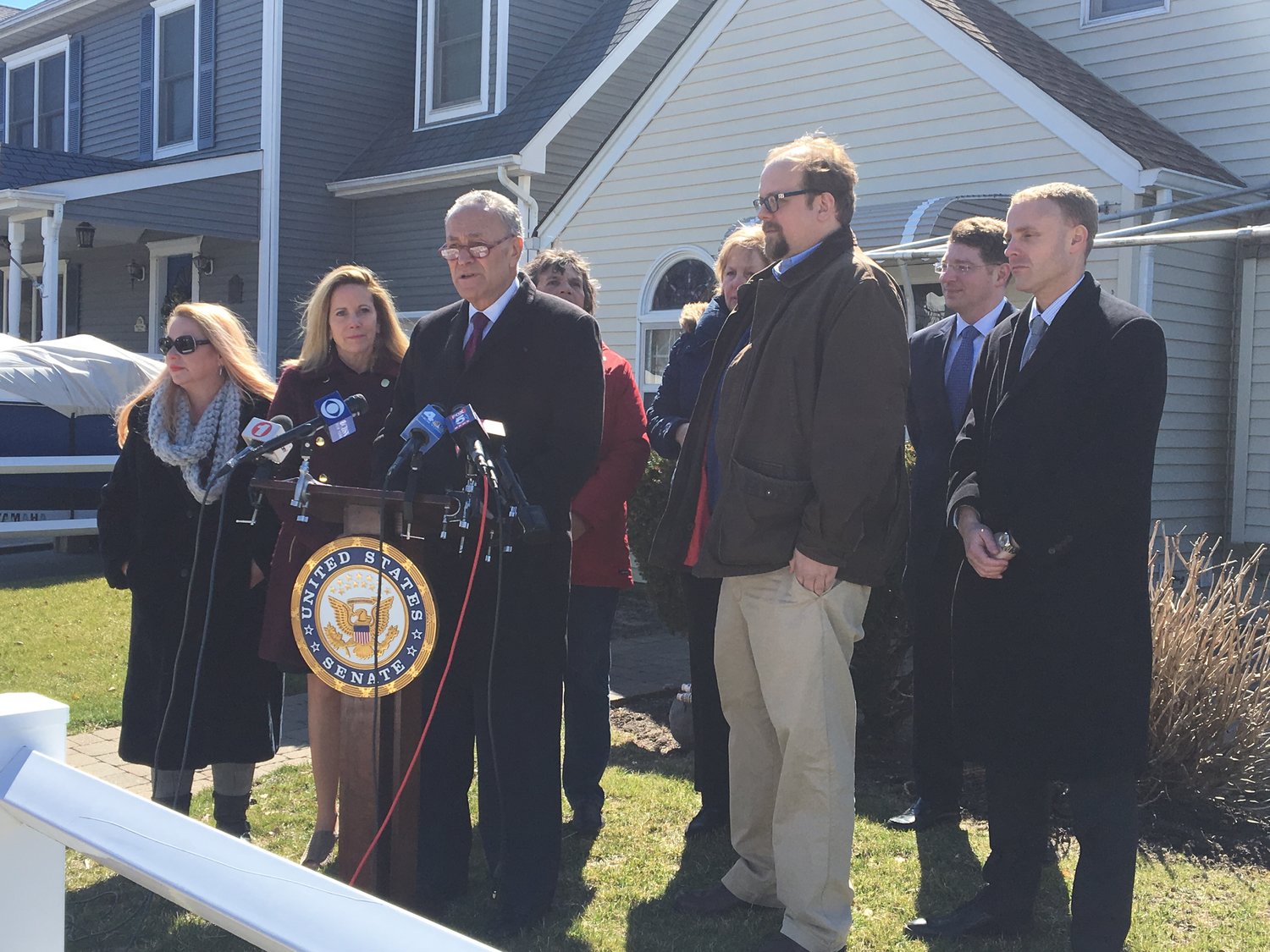 U.S. Sen. Charles Schumer was joined by residents and other elected officials in Long Beach on Monday to call on the Federal Emergency Management Agency to reconsider proposed changes to the National Flood Insurance Program.
Bridget Downes/Herald 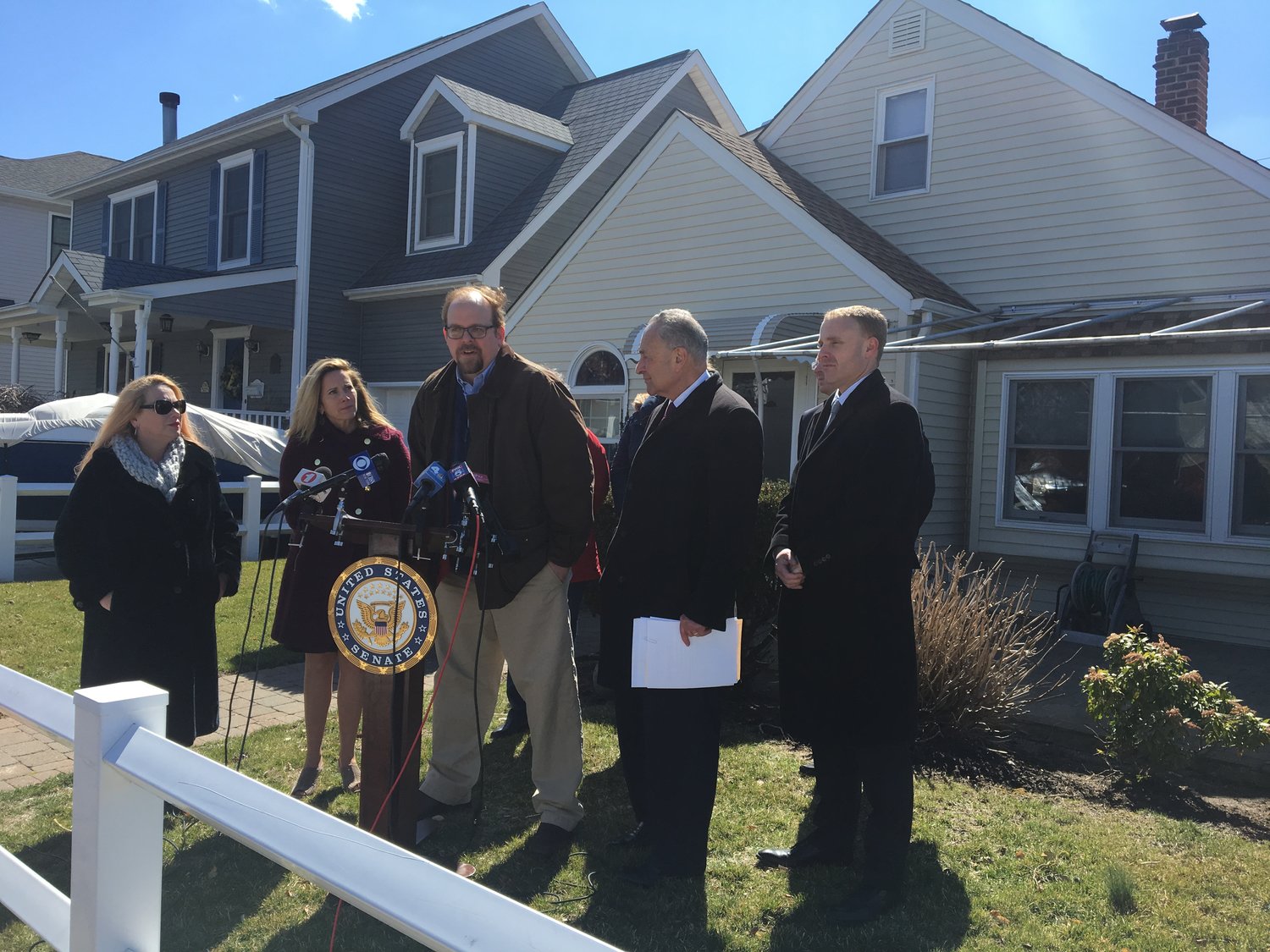 Long Beach resident Ray Flammer, at microphones, hosted the news conference outside his home, and said he might have to sell if insurance premiums increased.
Bridget Downes/Herald
Previous Next

It’s not that they shouldn’t pay something, but they’ve got to pay an affordable amount.”
Charles Schumer, U.S. senator
By Bridget Downes

U.S. Sen. Charles Schumer and other elected officials are calling on the Federal Emergency Management Agency to halt a plan to revamp the National Flood Insurance Program, saying the change would increase premiums to unaffordable levels, pricing out residents and lowering local property values.

At a news conference in Long Beach on Monday, Schumer said that the initiative, called Risk Rating 2.0, is moving along “under the radar,” and FEMA is not answering key questions, including one about the data the changes would be based on and another about the impact they would have on local property values.

“The irony in talking about this new federal plan for flood insurance on April Fools’ Day,” Schumer said, “is that it is an outright joke for the [Trump] administration to think that they can propose major reforms on how we pay for flood insurance, and how it impacts property values on Long Island, without presenting its plan and answering a litany of questions by Congress.”

In a Hurricane Sandy-ravaged community like Long Beach, where hundreds of homes have been rebuilt and elevated to comply with FEMA standards, many residents would be priced out of the program, officials said.

“The NFIP was designed to promote life in coastal communities like Long Beach. Instead, its new program threatens to snuff that out,” Acting City Manager Rob Agostisi said. “More troubling, however, is that the NFIP’s new risk calculation method — which it will use to calculate premiums — apparently includes the cost of rebuilding. This ensures that people in this region, which already has the highest cost of living in the country, will suffer a disparity. And while rebuilding costs arguably shouldn’t factor into any insurance policy at all, because they’re not based on risk, the NFIP, at the very least, needs to factor in policyholders’ income.”

While reform is necessary, he said, the proposed changes unfairly put a “bull’s-eye” on homeowners and would “sink” Long Island residents.

“Flood insurance affects us all in Long Beach, and this is my investment — this is my future,” said Long Beach resident Ray Flammer, the city’s tax assessor, who hosted the news conference outside his house, adding that he might need to sell his home if premiums were to increase. “I demand transparency from FEMA, and I ask them to halt.”

The agency would assess properties individually according to what it called “logical rating variables.” Schumer questioned the variables and outlined the plan, which he said was 221 words long, including that it would use data and metrics to determine customers’ premiums, like the type of flood, the distance the building is from the coast or another body of water, and the cost to rebuild the home. FEMA would also consider the replacement costs of homes, Schumer said, which would increase premiums for higher-valued properties and reduce them for lower-valued ones.

FEMA is billions of dollars in debt following destructive storms like Hurricanes Katrina and Sandy, and some have speculated that the proposed plan is intended to incentivize residents to leave flood-prone areas.

“It’s not that they shouldn’t pay something, but they’ve got to pay an affordable amount,” Schumer said, adding that the federal agency’s payouts in the past were often inadequate for homeowners suffering the impact of Sandy and other storms.

“Many of our South Shore residents are already paying thousands of dollars yearly for flood insurance, only to be shortchanged when filing claims in Sandy that has impeded their recovery to this day,” said Michelle Insignia, president of Adopt-A-Home Inc., adding that she and many of her neighbors in Lindenhurst are concerned about the affordability of their flood insurance rates.

The new rates for all single-family homes would take effect across the country in October next year, Schumer said.

“I have a four-letter message to FEMA: H-A-L-T,” he said. “Stop this plan, let us know what you’re doing, let Congress and homeowners have input, not just insurance companies, not just any of these people who benefit, and we can get things done.”

Schumer demanded that the agency answer questions, including how the new rates would be calculated, how many private companies would be gathering and measuring data, who would review the data, how property values would be affected and how FEMA would ensure better oversight of participating insurance companies.

“This is not an issue that simply affects Long Beach. It affects all of our shoreline communities throughout and beyond the Town of Hempstead,” said Hempstead Town Supervisor Laura Gillen. “We need to know what these changes are — it needs to be more than 221 words.

“We are dealing with problems with transparency throughout this recovery process in the Town of Hempstead,” she continued. “We had to just send out 13,000 letters to recovering homes impacted by Sandy that should have been sent out years and years ago by prior administrations. We are giving families the information they need in the Town of Hempstead. The federal government and the president should do the same.”

Schumer said he has long fought to protect NFIP policyholders throughout the state, including pushing for such reforms as providing protection for a stable and fair cost, requesting more accurate flood maps that take advantage of the latest technology, better oversight of insurance companies participating in the NFIP and stricter controls placed on lawyers defending insurance companies.

“It’s amazing that even as Nassau County homeowners are still struggling to figure out how they will deal with the changes to the SALT deduction, another tsunami is heading towards us from Washington in the form of this ‘reform’ to flood insurance risk assessments,” Nassau County Legislator Denise Ford said in a statement.

According to Newsday, FEMA said in a statement that it has “been working to ensure members of Congress understand this process, and we look forward to our continued partnership in this effort so everyone has a full understanding of the Risk Rating 2.0 transformation.”