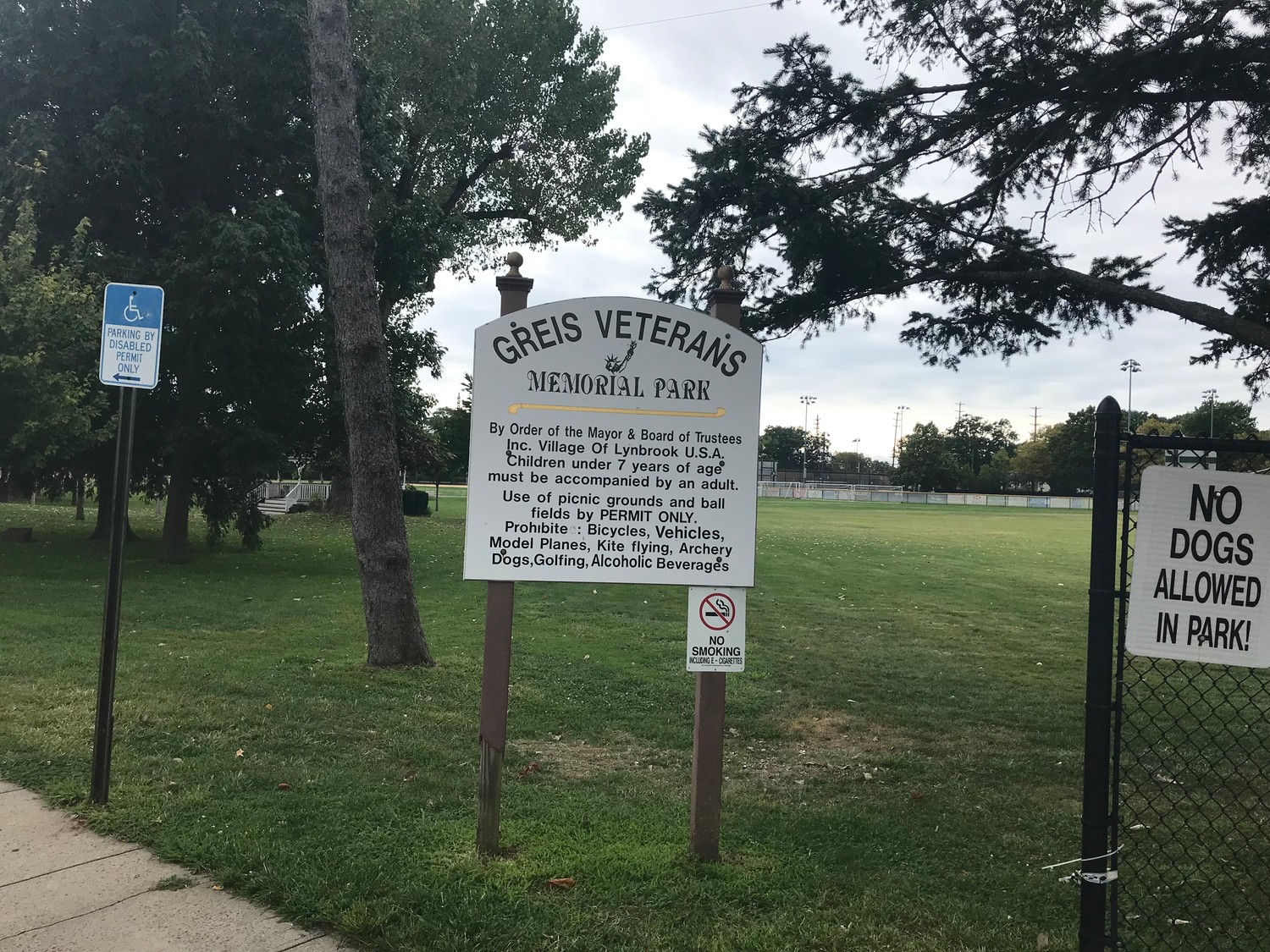 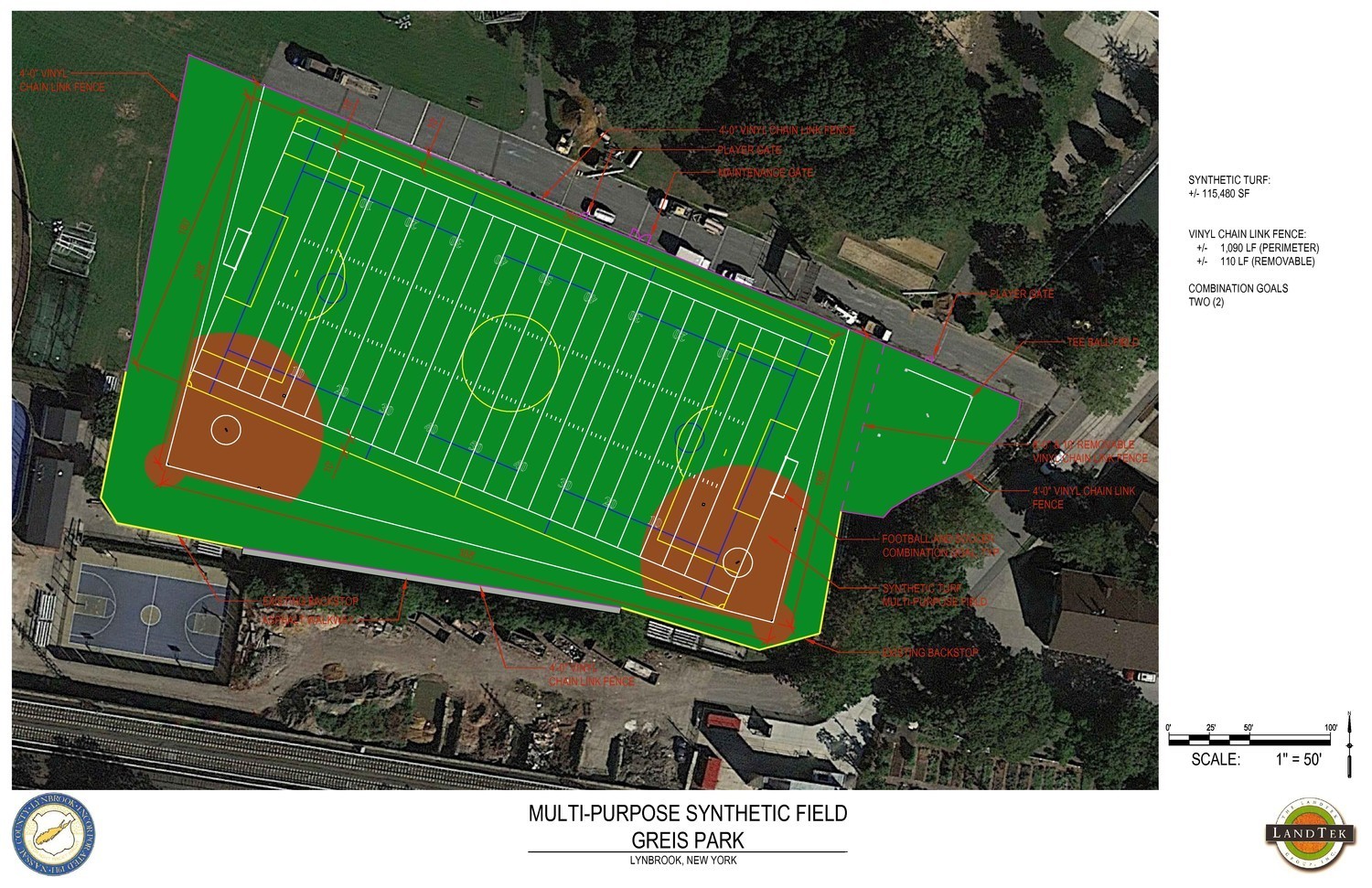 Officials want to move forward with a turf field, but will likely include it as part of the master plan.
Courtesy the LandTek Group
Previous Next
By Mike Smollins

A plan by village officials to add a synthetic-turf field to Greis Park has been delayed as the mayor and board of trustees decide which company will be awarded a contract to design a master plan to overhaul the facility.

“We want to move forward with the turf,” Mayor Alan Beach said. “But there’s been some hesitation because we want to do a master plan for the entire park.”

The search for the company that will design the plan has been narrowed down to Marvel Architects, which has offices in New York City and Puerto Rico, and Colorado-based GreenPlay. Representatives of the two firms attended the Aug. 20 village board meeting to discuss their visions with officials. They had each previously met with the board on June 18.

Greis Park, on Wilbur Street, has athletic fields, trails, picnic areas and playgrounds. Many of the community’s recreation programs, including its youth leagues, play there, and it is the site of several annual events, including Patriots’ Day, on Memorial Day eve. The park is also home to the village pool.

In March, former Jets defensive tackle Marty Lyons presented the board with a pitch to build a $1.4 million, multi-sport, synthetic-turf field in the southern portion of the park. Lyons was representing the Amityville-based LandTek Group. Though Beach and the board appeared to favor turf, they said they would rather include it as part of the greater master plan, a vision to improve multiple sections of the park grounds. The proposal to add a turf field has elicited mixed reactions from residents, some of whom support the motion, while others cite potential health risks and costs as reasons they oppose it.

“I don’t want to see turf,” Elizabeth Schachlinger said. “We are running out of real green spaces in Lynbrook.”

Jennifer Mandell Hinderstein also voiced her displeasure with turf and said she would rather see the funds used to keep the village pool open year-round.

Ivy Reilly said she supported the turf field. “I’m tired of rainouts because the grass is muddy,” she said.

Angel D’Amico Felden said that turf would need a great deal of maintenance, and focused on other areas that need improvement. The park needs “more lighting and games,” she said. “The bocce court can be improved . . . Corn hole is popular.”

Michelle Flammia said that if the turf is not installed, she wants to see the soccer fields leveled because she believes they are dangerous for players.

During his pitch to the village board, Tom Diehl, a project manager for GreenPlay, said he had studied turf fields and believed that they could be a good fit for the park. “The advantage with artificial turf is you could play on it 24/7 and it’s not going to wear out,” he said. “The carpet will last in the neighborhood of eight years, whereas if it’s a grass field and you play on it every night, in a couple of weeks it’s worn.”

GreenPlay has managed 475 projects across the country that were similar to the Greis Park master plan, Diehl said, adding that the company emphasizes transparency and communication with officials and residents. According to Diehl, if his company were chosen, the master plan would be developed in phases. First, GreenPlay representatives would learn about the community and residents’ needs and desires, host discussions with officials and park staff, conduct a survey, design the park and facility based on feedback, and then recommend updates, changes or additions to the grounds.

The survey would be mailed to 3,000 randomly selected homes in the village, Diehl said, followed by a larger survey for which all residents could vote on changes at the park. The residents would have the option of returning their answers by mail or going online. The company would then host public meetings and update plans based on residents’ desires before a final plan were drafted.

Village officials, Beach said, have approached the master plan with the idea of possibly moving sections of the park around. He said there is an underused basketball court that could be used for another enhancement, and that the courts could potentially be moved indoors. Trustee Mike Hawxhurst said the overall project might have to be done in sections, taking many years to complete.

Representing Marvel Architects, Tyler Silvestro said his firm has designed similar projects on Long Island and in Brooklyn, among other places. He said his firm comprised 90 people, who have completed projects including urban and park master plans in the past.

“Our bread and butter is figuring out what to do with structures and how to reinvent them,” Silvestro said. He spoke of potentially adding walking paths between the playgrounds and installing canopies for shade. He added that the park’s main building could house more events and programs. The board has favored replacing the recreation center building.

Beach told the Herald in June that funds for the design work were included in the 2018-19 village budget, but he did not specify how much money was allocated. He did note, however, that the board would negotiate the price once a bidder was awarded the project.

Many residents responded to a Herald inquiry and said they would like to see additions such as a dog run, walking and bike trails, shaded areas over the playgrounds, a community garden, new bleachers, a fitness center, a multi-purpose room for dance and fitness and a new recreation center with more programs at the park.

Beach said the board is still deciding between companies, but he added that he hoped to reach a decision soon. “I would like to approach it to be able to move things around,” he said. “I want to get the best usage out of the facility.”