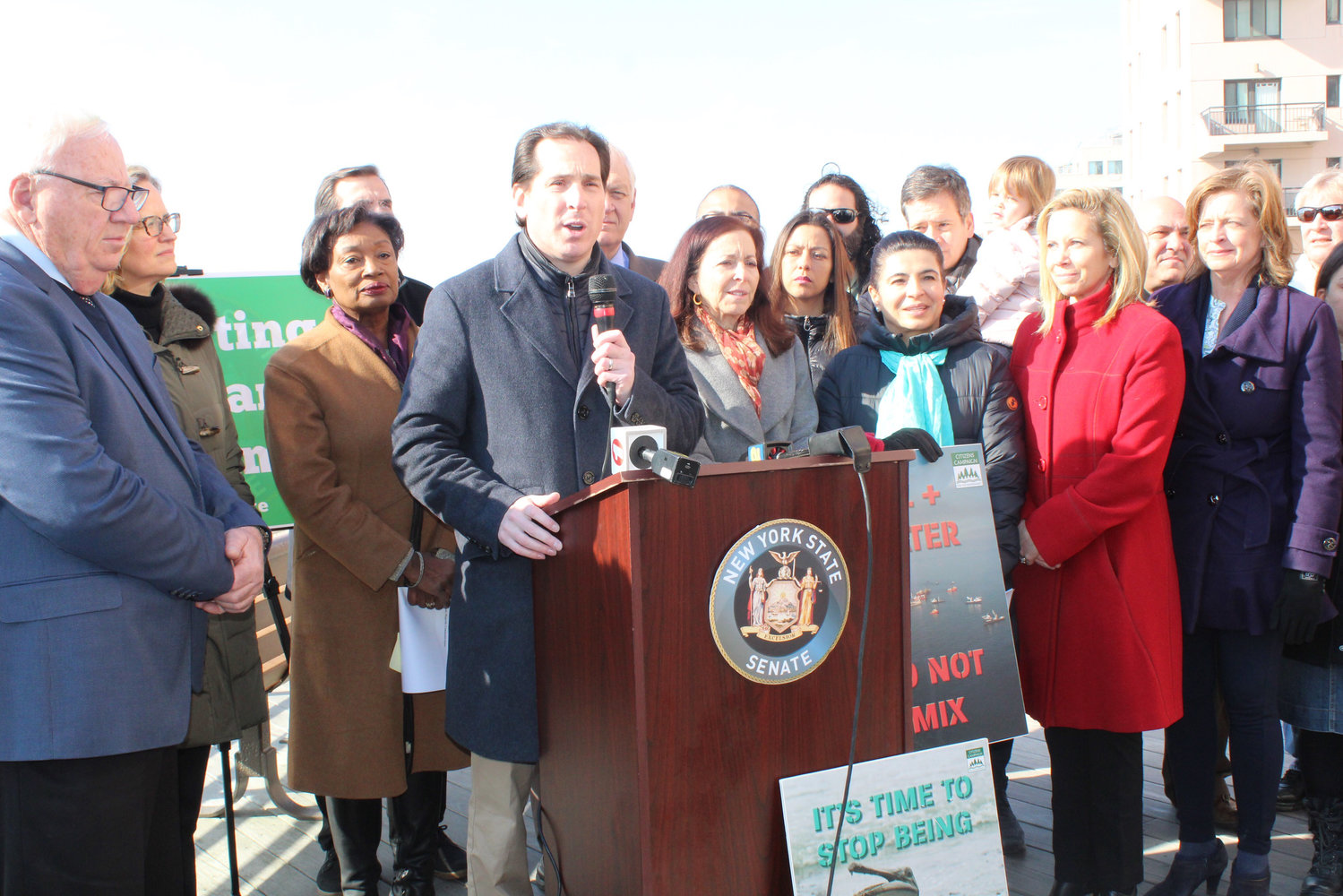 State Sen. Todd Kaminsky held a news conference on Sunday on the boardwalk, where he announced that a bill that he sponsored to ban offshore drilling was expected to pass in the State Legislature.
Courtesy Senator Kaminsky’s office
By Anthony Rifilato

State Senate Democrats approved what was described as historic legislation on Tuesday to ban offshore oil and natural gas drilling along the New York coast, a rebuke of the Trump administration’s plan to open ocean waters to energy companies.
The Democratically controlled Senate easily approved the measure, a day after the legislation passed the Assembly. Officials said that Gov. Andrew Cuomo, who supports the ban, is expected to sign the bill.
The expected passage of the legislation — sponsored by State Sen. Todd Kaminsky, a Democrat from Long Beach and chairman of the Senate’s Environmental Conservation Committee — was announced last Sunday at a news conference on the boardwalk, where Kaminsky joined Senate leaders and Assembly Democrats, as well as local officials and environmentalists.
Lawmakers said the legislation would update decades-old laws regulating oil and natural gas drilling and prevent conveyances, leases and acquisitions of land for offshore oil and gas.
“The Senate majority will not stand by as the Trump administration plans to drill off Long Island shores,” Senate Majority Leader Andrea Stewart-Cousins said. “Long Island’s natural resources and communities’ quality of life are under threat. The Senate Democratic majority will stand up for Long Island families and fight against any efforts to drill anywhere near New York’s coastlines.”


In January 2018, the Trump administration said it would allow new offshore oil and gas drilling in nearly all U.S. coastal waters, “giving energy companies access to leases off California for the first time in decades and opening more than a billion acres in the Arctic and along the Eastern Seaboard,” The New York Times reported.
The proposal by the U.S. Department of the Interior would open more than 90 percent of the outer continental shelf — the submerged land three miles off a state’s coastline — for oil exploration and drilling. The Draft Offshore Oil & Gas Leasing Program for 2019-24 would open thousands of miles of U.S. coastline to oil drilling, including regions in the Atlantic and Pacific oceans that members of the Surfrider Foundation said have been protected for decades.
The proposal drew fire from U.S. Sens. Charles Schumer and Kirsten Gillibrand, Gov. Andrew Cuomo, and state and local officials, who said that New York’s coastal waters are vital to its economy. Kaminsky called offshore drilling “too risky.”
“It’s essential for tomorrow that we protect our planet today — especially the vital natural resources here on Long Island and across our state,” Kaminsky said. “We are taking two big steps toward a more sustainable future for New York. Offshore drilling is dangerous to the local environment, and would reverse progress toward our climate change goals. It must be prohibited.”
”Once again, our precious natural resources are at risk from unscrupulous interests seeking to drill off of our Atlantic Coast,” said State Sen. John Brooks, a Democrat from Seaford. “This legislation is a necessary step in protecting our shores and ensuring that what is truly special about Long Island remains in the collective hands of its citizens.”
Tuesday’s legislation comes a year after Long Beach officials and local environmentalists voiced their opposition to offshore drilling along the East Coast at a state Assembly Environmental Conservation Committee hearing in Suffolk County, saying the move would hurt the environment and devastate coastal communities in the event of a catastrophe like the Deepwater Horizon oil spill.
Long Beach resident Amanda Moore, co-chair of the Surfrider Foundation Central Long Island Chapter, lauded Tuesday’s legislation. “We’re thrilled that the state took this kind of progressive action against offshore drilling,” she told the Herald. “We know that the proposed drilling sites are not in state waters, but banning all oil related activity in state waters makes it much harder for oil and gas companies to extract and transport oil.
“The exploration to find viable oil resources starts with seismic testing, which is extremely detrimental to any marine life,” she added. “If we were actually to have oil drilling off our coast, it’s always considered a terrorist target, and we’re always scared of spills. It’s not a matter of if a drilling site will have a leak, it’s when.”
Specifically, the law prohibits the leasing of state-owned underwater coastal lands for oil and natural gas drilling and prevents the Department of Environmental Conservation and the Office of General Services from authorizing leases that would result in the increase of oil or natural gas production in federal waters. Additionally, the bill restricts companies from developing pipelines associated with the delivery of natural gas or oil.
“The bill would prohibit New York’s waters for being used for offshore oil drilling and for any infrastructure or transmission that can be used in federal waters and come through our territory,” Kaminsky said at the news conference. “Having New York waters — which are three nautical miles off this very coastline — off limits to oil production and exploration will go a long way to making sure that no company wants to drill off our coast.”
The State Legislature also passed a separate bill to protect menhaden, or bunker fish — a major food source for whales, dolphins, seals, coastal sharks, predatory fish and other marine life – from overfishing.
According to the legislation, also sponsored by Kaminsky, the bill is part of an effort to restore the menhaden population, which have helped bring back whales and dolphins to New York’s coast. The law would ban a fishing method used by commercial fishing vessels called purse seining, in which schools of fish are encircled and caught with large nets.
Report an inappropriate comment