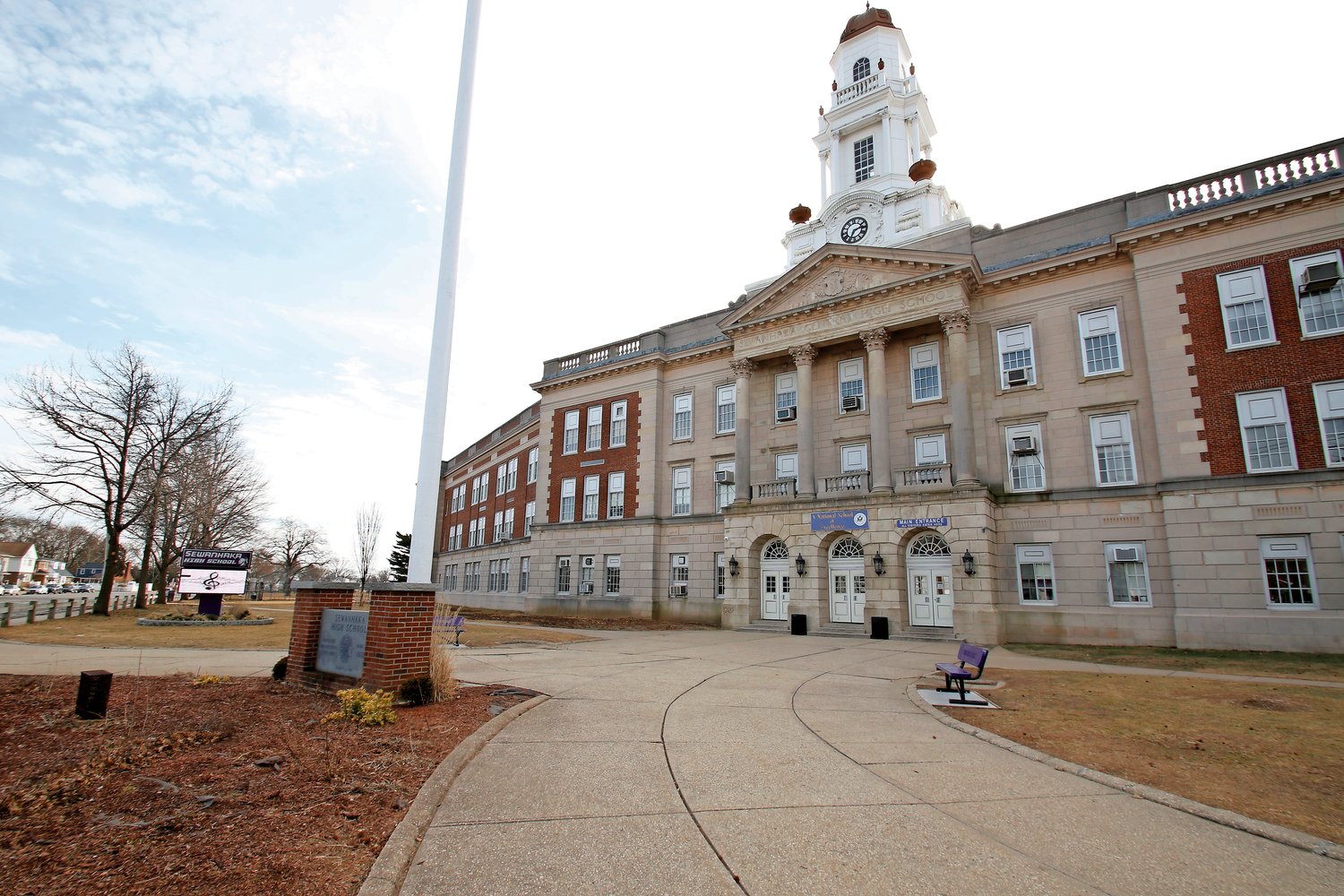 Sewanhaka High School was built in the late 1920s, and has retained its Indian nickname ever since.
Christina Daly/Herald
By Melissa Koenig

Sewanhaka Central High School District officials will re-evaluate the mascots used at all five schools for potential racial insensitivity, they announced at a July 7 Board of Education meeting, after students questioned the district’s use of the Indian mascot at Sewanhaka High School.

“As a result of some community concern, the Board of Education and administration will be surveying each of the school mascots to gauge their appropriateness to the school and their community values,” Superintendent James Grossane said in a statement. “We will be sharing updates on this matter at future board meetings.”

District officials previously refused to change Sewanhaka’s Native American mascot after former State Education Commissioner Richard Mills called it “disparaging” in 2002, according to the New York Post. “No one wanted to change the school logo,” then-Assistant Superintendent for Instruction Edward Tronolone said. “We didn’t feel it was disrespectful in any way.”

But the National Congress of American Indians has been campaigning to end the use of stereotypical Native peoples in sports brands since 1968, according to the organization’s website. It explains that Indian mascots were “born in an era when racism and bigotry were accepted by the dominant culture,” and continue to perpetuate negative stereotypes about America’s indigenous population.

“It makes sense that we get rid of all these symbols that marginalize people,” said Aubrey Phillips, an Elmont resident who served on the high school district’s Board of Education in the early 2000s, as more racial issues come to light.

Alumnae Nya Archie and Kayla Jefferson also said they thought the district was exploiting the Native American mascot. Archie told the Herald that its use “seems like a shady, performative act of allyship,” and Jefferson compared white students’ dressing up in Native American garb to their wearing blackface. “I am a Black person,” she wrote, “so I think that is very disrespectful.”

Others in Elmont and Franklin Square agreed, expressing their support for changing the high school’s mascot in response to a Herald social media inquiry. Alysse Peverrell, for example, commented, “If an entire race of people — one that was brutally removed from their land — say they do not wish their likeness to be used as a character, it seems very simple and logical to cease doing so.”

Roberta LeBaron explained that America’s vernacular changes with time. “In this case, we are bringing our vocabulary in line with our values and understanding,” she wrote, adding that people who oppose the change may also not have liked the “terms used to describe their race, religion or ethnicity that we have evolved out of using, as we become more educated and enlightened about how we treat people.”

Other residents noted that other sports teams have changed their names, or are considering doing so, to be more racially sensitive. Marc Villavicencio pointed out that St. John’s University changed from the Redmen to the Red Storm in the mid-1990s, and Carol Shapiro suggested that district officials wait to see what Major League Baseball’s Cleveland Indians decide to do. The team eliminated its controversial Chief Wahoo logo last year.

On July 3, the Indians tweeted that “the recent social unrest in our community and our country has only underscored the need for us to keep improving as an organization on issues of social justice. With that in mind, we are committed to engaging our community and appropriate stakeholders to determine the best path forward with regard to the name.”

Shapiro, a Franklin Square resident who graduated from Elmont High in 1970, also suggested that the district discuss the matter with local Native American tribes and ask students for their opinions.

But many other residents criticized the idea of changing the school mascots, calling it, among other things, “ridiculous.” Carieanne Wolanin Dempsey wrote that “everything’s offensive to someone,” and some questioned how far the move toward political correctness would go. Mike Swedenberg asked whether Long Island town names would also have to be changed, and Richie Oliver commented that he always thought Sewanhaka’s mascot “paid homage and respect” to the tribe that once lived in the area.

“These things were not named to offend, they were named to honor,” Oliver wrote of the district’s mascots. “Start looking at things through the right lens — things are never as negative as some want them to be.”

Victoria Kessler concurred, writing, “Anyone who is offended by the Carey Seahawk is part of the problem,” and Julia Courtney asked, “What’s so bad about a Seahawk or the other mascots that have been around forever?”

The Central High School District was formed in 1929, when Sewanhaka High School was built. It has used the Indians nickname ever since.

“I can understand why Sewanhaka chose the name ‘Indians’ back then, it was done without malice,” Shapiro wrote. “But we know more now. We are a big mosaic of people now. We are, and should be, more sensitive.”