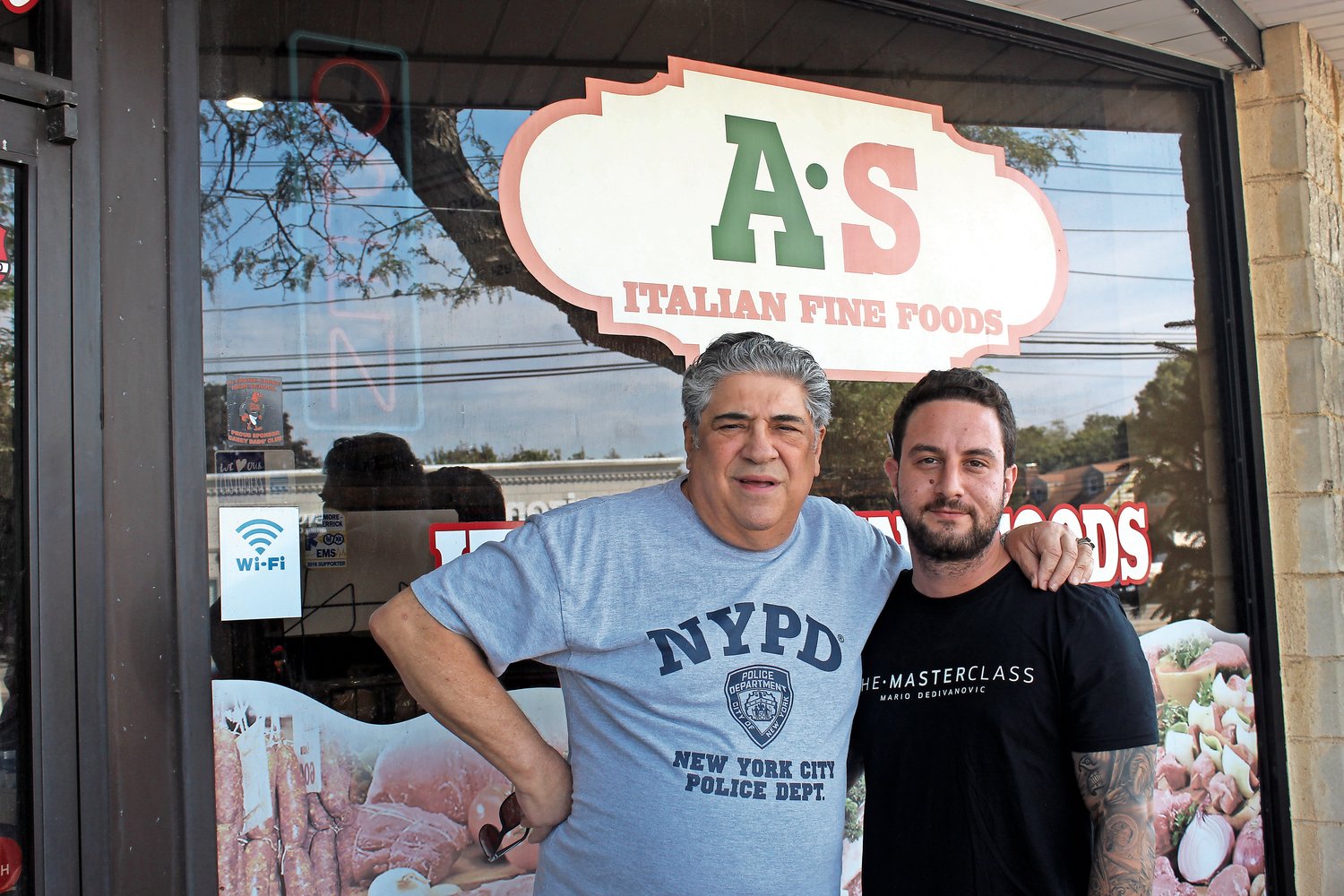 “Sopranos” star Vincent Pastore, left, joined Anthony Giordano, the owner of A&S Fine Foods in Merrick, to promote their new tomato sauce, which will be sold at the store starting next month.
Alyssa Seidman/Herald Life 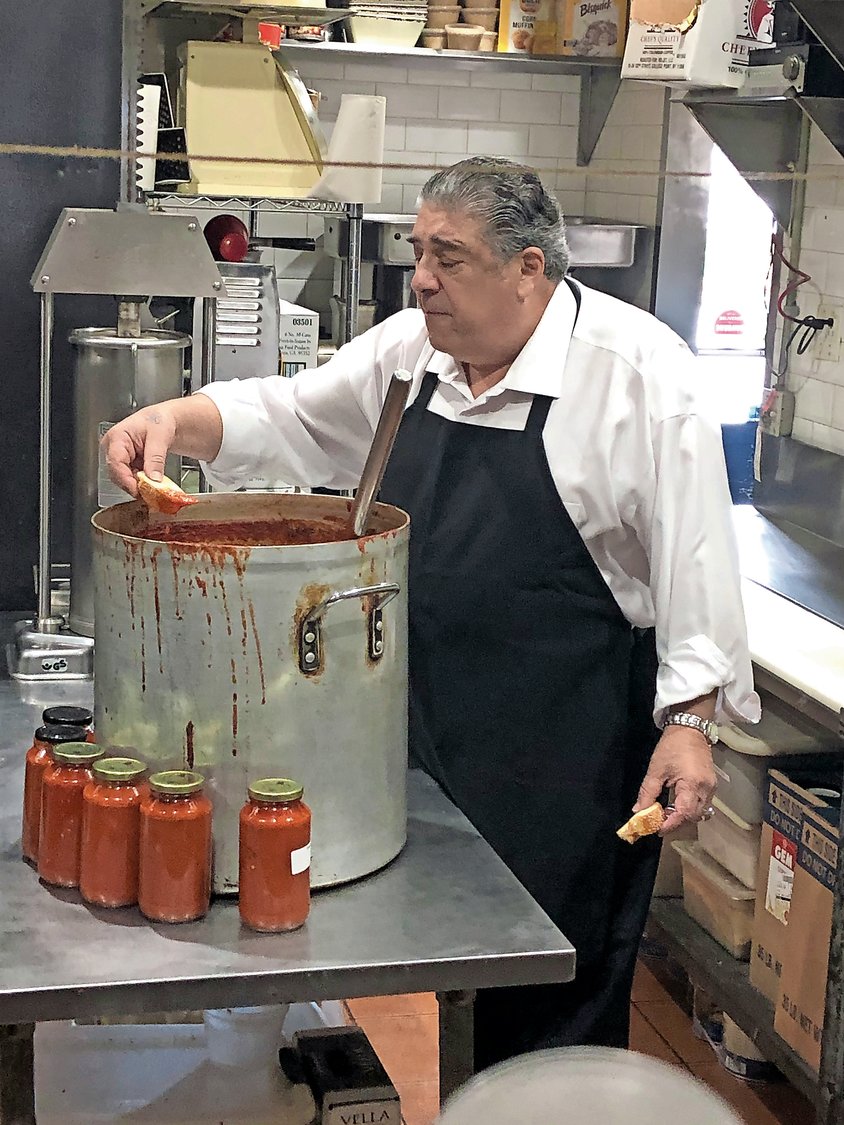 Pastore cooked up a sampling of his tomato sauce in the kitchen of A&S Fine Foods in Merrick.
Courtesy Andrew Jedlicka 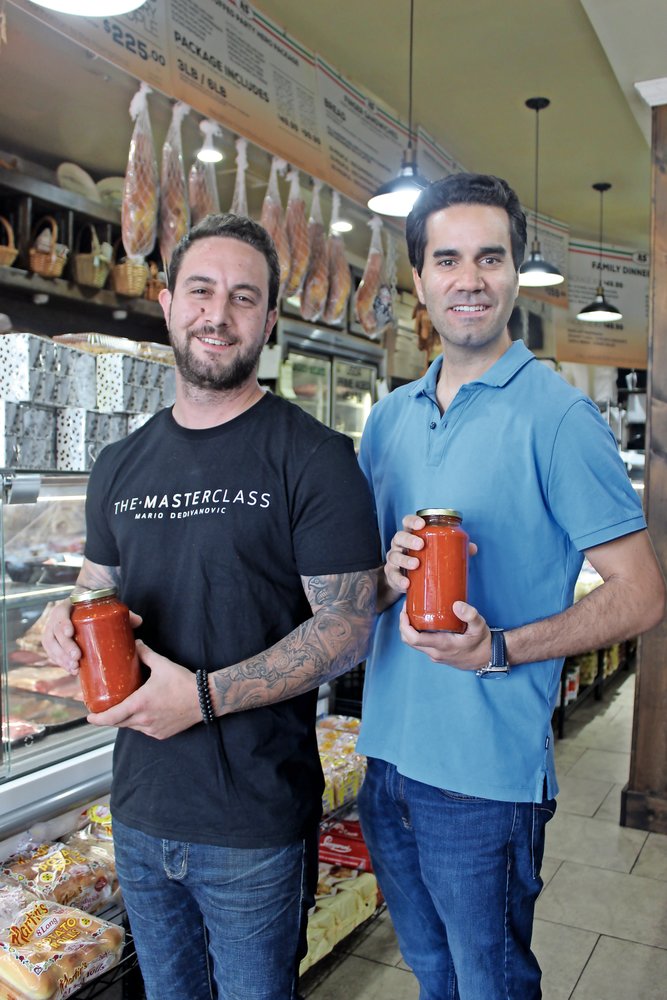 Fans of “The Sopranos” will soon have another way to celebrate the show’s 20th anniversary. In addition to “The Many Saints of Newark,” a “Sopranos” prequel set for release next September, audiences can soon cook up their favorite Italian dishes using a special new sauce courtesy of one of the show’s stars.

Next month, Vincent Pastore, who portrayed Salvatore Bonpensiero in the HBO series, will launch an eponymous tomato sauce at A&S Fine Foods in Merrick. The Italian grocery will be the first store to sell the sauce, which will also be available at Amazon.com in the coming weeks.

“As you get older, you start thinking of things you could do to keep your career going [without leaving] your house,” Pastore said as he sat at one of the café tables outside A&S. “So, having a jar of sauce in a grocery store is probably the best way for me to make a dollar.”

Pastore’s career spans more than 170 acting credits in film and television, where he is most often cast as a Mafioso. These days he leads acting intensives at HB Studio in Manhattan and is the front man for a band called Gangster Squad.

A&S’s owner, Anthony Giordano, and his business partner, Andrew Jedlicka, came up with the idea for Vinny Pastore’s Italian Sauce earlier this year. The brand aims to celebrate Pastore’s career as well as the familial characteristics of an Italian-American heritage. It was an offer the actor couldn’t refuse.

“Anthony and I reached out to Vincent and brought the concept to his attention, and he really liked it,” Jedlicka said. “We’re bringing Italian-American heritage, Vincent’s impressive career and his personality to life in this brand.”

Vinny Pastore’s Italian Sauce is made with San Marzano tomatoes, is non-GMO and has no added sugar. According to Pastore’s Instagram page, the recipe resembles a “true Neapolitan marinara sauce, with rich, organic, premium quality whole peeled tomatoes imported directly from Italy.”

“I love it! I wouldn’t be trying to sell it if I didn’t like it,” Pastore said earnestly. “It’s delicious.”

In A&S’s kitchen, samples of the sauce were spooned into plastic cups from unmarked jars. The label is still under wraps, but Pastore revealed that his signature would be featured in the design. He joked that true “Sopranos” fans would buy the sauce just for that reason, and “probably never even use it.”

Pastore said that A&S was the “perfect” place to launch the sauce. The store has been a staple in the community for 10 years, and will soon open an extension two storefronts down, Giordano’s Gourmet Fish Market.

“My whole life has been A&S,” said Giordano, of Merrick. “It’s been in my family for 20 years, and it’s a new generation.” Of launching the brand, Giordano said, “It’s awesome. It’s a really good venture, and I think we have some momentum behind it.”

The partners plan to sell products beyond the sauce, including pasta, olive oil and, Pastore mused, hair gel. “We’re going to have a lot of fun with this,” he said.

A launch party for the sauce will be held at A&S Fine Foods in November. Pastore will be there to greet fans, and guests can purchase jars of their own. Residents can follow A&S’s Facebook page or @vinnypastoresauce on Instagram for details on the launch and other saucy updates. The store is at 2162 Merrick Road, and can be reached at (516) 377-5555.