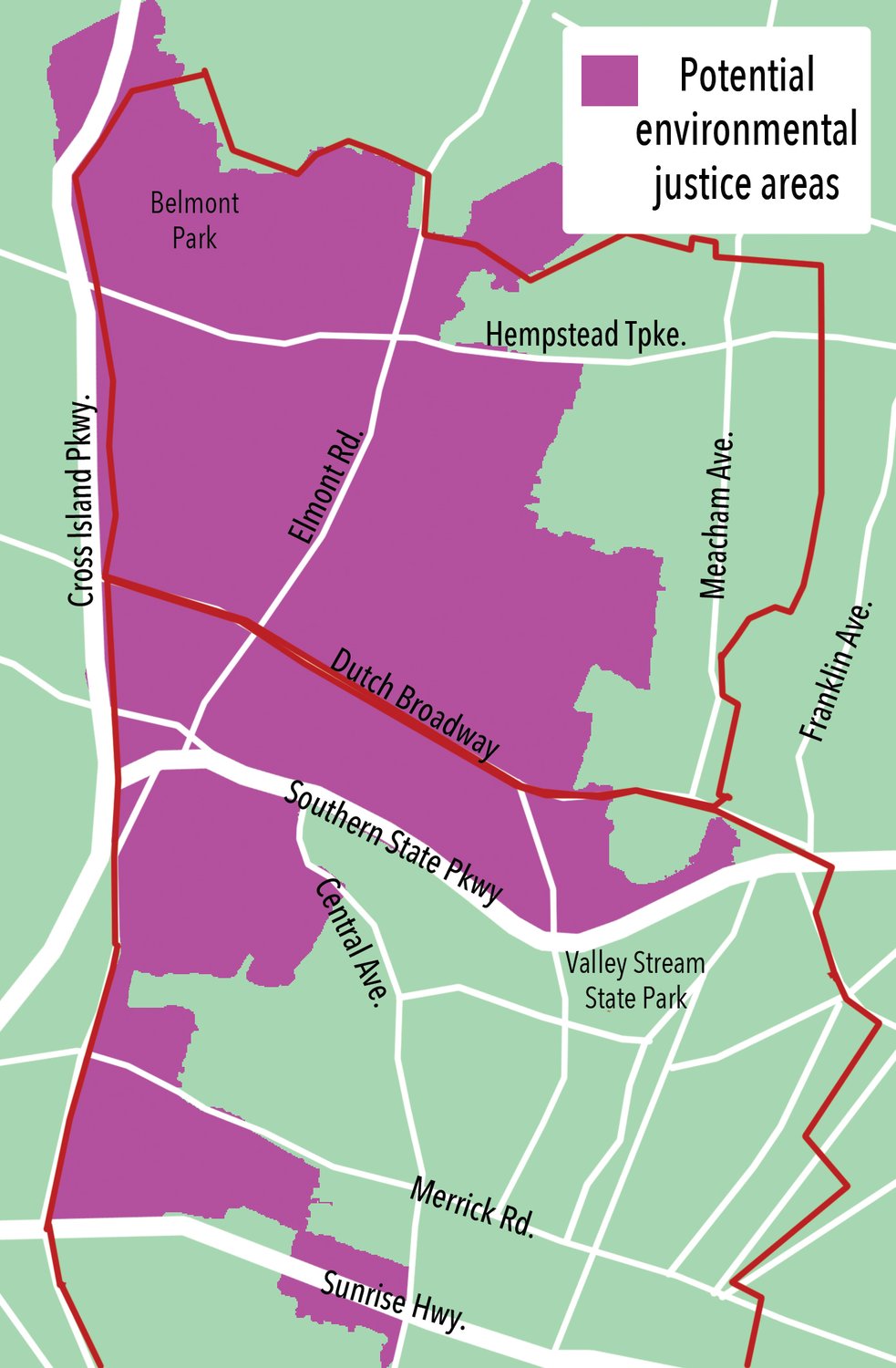 The State Department of Environmental Conservation designates Elmont and parts of Valley Stream as Environmental Justice Areas. The bond act mandates that at least 35 percent of its funding go toward such areas.
Illustration by Christina Daly/Herald Source: State DEC 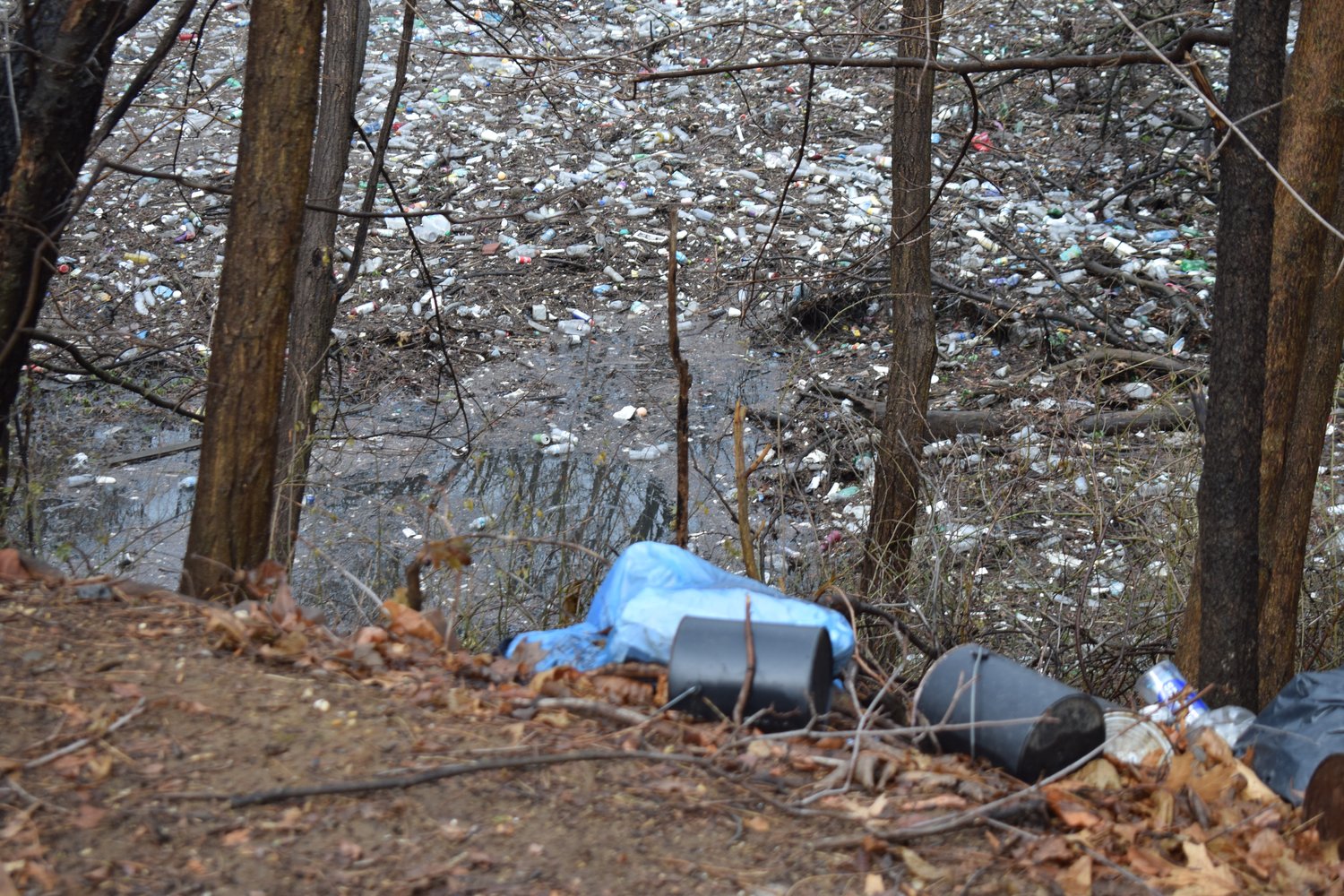 The storm catch basins in Elmont have long been plagued by garbage buildup. Local Activist Mimi Pierre Johnson suggested that funds from the state’s Environment Bond Act be used to turn the area into a green space.
Ronny Reyes/Herald
Previous Next
What is an Environmental Justice Area?

The State Department of Environmental Conservation regards potential Environmental Justice Areas as meeting or exceeding at least one of the following statistical thresholds:

— At least 51.1 percent of the population in an urban area reported themselves to be members of minority groups.

— At least 33.8 percent of the population in a rural area reported themselves to be members of minority groups; or

— At least 23.59 percent of the population in an urban or rural area had household incomes below the federal poverty level.

With the passage of New York’s Environmental Bond Act, officially known as the Restore Mother Nature Bond Act, along with the state budget earlier this month, communities across the state are potentially slated to gain access to roughly $3 billion in bond funding for various environmental and infrastructure projects should voters give final approval to the borrowing in November 2022.

The money that would be provided through the act is intended for projects that fall into four broad categories, according to a report by Rebuild by Design, a community and engineering advocacy organization formed in the wake of Hurricane Sandy. They are:

Rebuild By Design estimated that the bond act has the potential to generate 65,000 jobs, and State Sen. Todd Kaminsky called the funding a “once-in-a-generation” opportunity to improve or replace aging infrastructure in Elmont and Valley Stream. Valley Stream, Kaminsky said, could request funding for the replacement of its sewer systems. “Valley Stream has been a community for well over 100 years,” he said, noting that some of its municipal infrastructure dates to its founding. “. . . It’s very rare for this kind of money to become available.”

While the bond act outlines allowable uses for the funding, it would remain up to municipalities — villages, the Town of Hempstead and Nassau County — to identify need and administer the projects, Kaminsky said.

Guy Jacob, a retired teacher at Wheeler Avenue Elementary School in Valley Stream and an environment advocate, said that the bond act would provide a number of benefits, including clean-energy infrastructure, but in light of rising ocean levels, Jacob took issue with the relatively large amount of funds earmarked for shoreline replenishment and storm-mitigation projects, which he said would be a futile effort. According to the act, a third of the bond money would be made available for those projects.

“There is no infrastructure that would prevent disaster from such a sea level rise,” Jacob said. “Much better to spend that $1 billion subsidizing energy-efficiency infrastructure, distributed solar, electronic vehicles and ground-source heat pumps.”

Additionally, he said shoreline restoration projects might do more harm than good. “They mess with a dynamic system to create very temporary fixes,” Jacob said, “even while they engender more environmental problems.”

State Assemblywoman Michaelle Solages, a Democrat from Elmont, said that as severe storms become more frequent, such protection might be necessary. “We saw after [Hurricane] Sandy and [Tropical Storm] Irene that our infrastructure is quite weak,” Solages said.

Areas in Elmont, and northern and southwestern Valley Stream, are still prone to flooding, she said, noting a $3.8 million state-funded storm-resiliency project completed in Millbrook in September 2019 as an example of the type of construction the bond funds could enable. The Town of Hempstead-administered project restored wetlands along Hook Creek, replaced failing wooden bulkheads, improved storm-water drainage and created a pathway park running from Mill Road to Cloverfield Road South, an area extensively damaged by Sandy.

“It’s just a good investment, just like us bonding for smart schools,” she said. “With Covid, that money paid itself back, and we need to be at the forefront of this issue. We’re in a climate crisis, and we don’t have time. If we’re fighting a losing battle, at least in New York state, we can get a leg up and protect what natural resources we have.”

Perhaps most consequential for Valley Stream and Elmont, however, is a provision in the act mandating that 35 percent of the bond funding be earmarked for projects in communities the state regards as Environmental Justice Areas. Designated by the Department of Environmental Conservation, these areas are neighborhoods that meet certain racial and socioeconomic demographic criteria. According to the DEC, much of Elmont and portions of western Valley Stream are potential Environmental Justice Areas.

“If we’re talking about social justice issues, it’s to ensure our water is safe and clean to drink,” Solages said.

Mimi Pierre Johnson, an Elmont resident and the founder of the community advocacy group Elmont Cultural Center, said she hoped the funding could be put toward reducing air and water pollution in the neighborhood. Over the past decade, Elmont has had higher cancer rates than the surrounding areas, according to county figures. While the bond act wouldn’t fund a study to look into the causes of the elevated cases, as Pierre Johnson has sought, it could pay for additional water purification infrastructure should additional contaminants be discovered in the area’s drinking water.

“The water authorities are at the forefront of this issue,” Solages said. “They’re looking at contaminants that get into the water as it happens. This will give them the ability to stay ahead of them.”

Additionally, the act could fund the creation or preservation of green spaces in Elmont, along with the planting of trees. “Elmont doesn’t have a lot of trees,” Solages noted, saying that many have been cut down due to disease or uprooted during storms, but it would be incumbent on the Town of Hempstead to take advantage and establish a tree program.

Pierre Johnson said she would like something to be done with the storm-water catch basins on Dutch Broadway, which have long suffered from garbage accumulation. “They’re doing what they’re supposed to be doing,” she said of the sumps designed to prevent flooding. “The water comes in and goes out to the bay.”

But she said she hoped that with the bond funding, they could be transformed into something more. “Maybe we could look to a neighborhood like Garden City, who looked to turn their sumps into a bird sanctuary,” she suggested. “Maybe we could plant flowers and add landscaping to create a green space.”