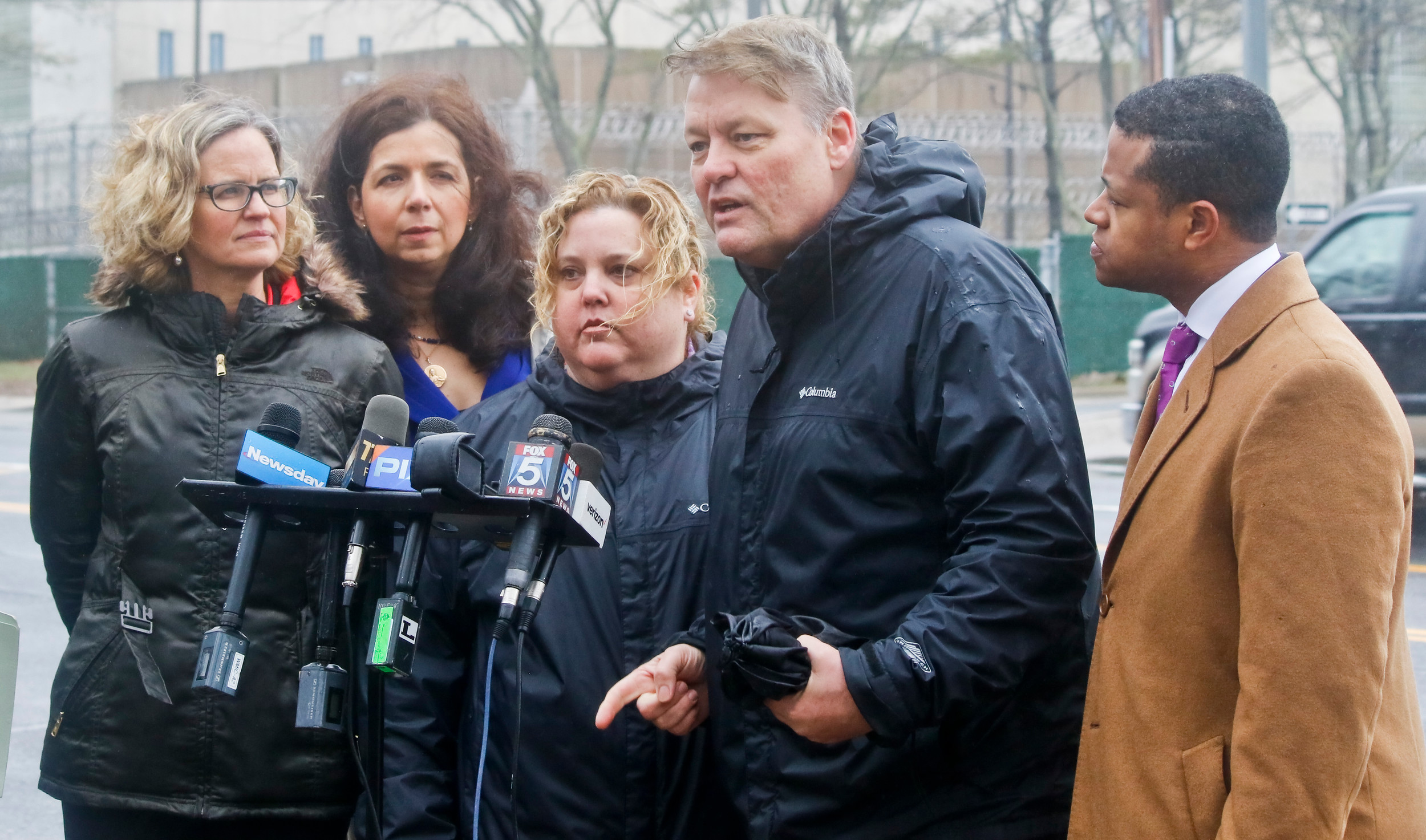 Cold, rain and wind did not stop Nassau County Legislator Carrie Solages from hosting a news conference on April 6 outside the Nassau County Correctional Center in East Meadow, calling on the State Legislature to pass legislation that would raise the age of criminal responsibility from 16 to 18.

Three days later, the Legislature passed the initiative, part of the 2017-18 state budget. The law, signed by Gov. Andrew Cuomo, will change the way the state proceeds with criminal cases involving 16- and 17-year-olds, moving most cases directly to Family Court, or to judges who have extensive knowledge and access to social services and special training.

“I’d like to thank the state elected officials who led this initiative,” Solages, of Elmont, said. “The reason I held the news conference so close to the state budget vote is because this initiative is so important for our young people. We are pro-law enforcement and pro-law and order; we just want our young people to be treated fairly and justly.”

Under the new law, 16- and 17-year-olds will no longer be placed in adult jail or prison. A “youth part” will be established in Criminal Courts for nonviolent felony cases, where cases will be held for 30 days before being automatically sent to Family Court, unless there is an extreme circumstance that would keep the case in Criminal Court. The current list of juvenile offenses will apply to 16- and 17-year-olds.

New York State was one of two states, along with North Carolina, that prosecuted 16-and 17-year-olds as adults. The law will allow additional opportunities for those as old as 17 to receive services by requiring probation officers to assess young offenders carefully, and allowing judges to order help services during Family Court proceedings.

“Young people who commit non-violent crimes will now receive the intervention and evidence-based treatment they need, something every New Yorker can be proud of,” Cuomo said in a statement.

“It is just plain wrong to treat young kids in the same way convicted felons are treated, especially when they have not committed a violent crime,” Legislator Laura Curran, of Baldwin, said at the press conference. “This is a common-sense perspective, not just some crazy liberal talk.”

In 40 states, all teens younger than 18 are charged as juveniles, and in eight states, the age of responsibility is 17.

“We are not asking for juveniles to be treated as if their actions don’t have any consequences,” Solages said. “It’s about giving young people a second chance at life.”

Cuomo introduced the $152 billion state budget on Jan. 17, which included the raise-the-age proposal. The budget was due on April 1, but Cuomo announced the passage of an emergency budget extender on April 3 that allowed lawmakers two extra months to reach an agreement. The budget passed last Sunday night.

“It is vital for lawmakers to understand the importance of this issue,” said Dr. Jenny Bencardino, founder and director of Free Spirit, a program that has helped organize tennis and soccer instruction for children at juvenile detention centers across Long Island. “At age 16 and 17, children’s cognitive skills are still developing and their behavior is impulsive. They lack the ability to focus on the consequences of their behavior.”

According to RaiseTheAgeNY.com, 30,000 to 50,000 minors are prosecuted as adults in New York state each year, and young people who are transferred to the adult criminal justice system are 34 percent more likely to be rearrested for violent and other crimes than those retained in the youth justice system. The site goes on to claim that young people in adult prisons are twice as likely to report beatings by staff; that they are 50 percent more likely to be attacked with a weapon than those housed in youth facilities; that 80 percent of young offenders released from adult prisons reoffend; and that minors are 36 times more likely to commit suicide in an adult facility.

“If these kids are not allowed to play video games until they reach a certain age because the games are too violent, then they should not be housed with violent criminals if they only committed a non-violent offense,” Ken Beiner, a licensed clinical social worker from Massapequa, said at the April 6 news conference.

“Jailing 16-and 17-year olds with an adult population causes severe trauma and serious psychosocial damage, not only to those adolescents and their families, but to the community and public at large,” added Penny Siegmann-Beiner, a licensed clinical social worker. “We don’t allow these children to watch R-rated movies, so why should they be treated as adults in the justice system?

“We have to focus on rehabilitating them to give them a real shot at life,” Siegmann-Beiner said. “These kids are young, they make mistakes and they should be held accountable for their actions. Each action has a consequence. But we have to rehabilitate them so they don’t reoffend.”

Solages said that raising the age is in the best interests of the youth, their safety and the safety of the communities.