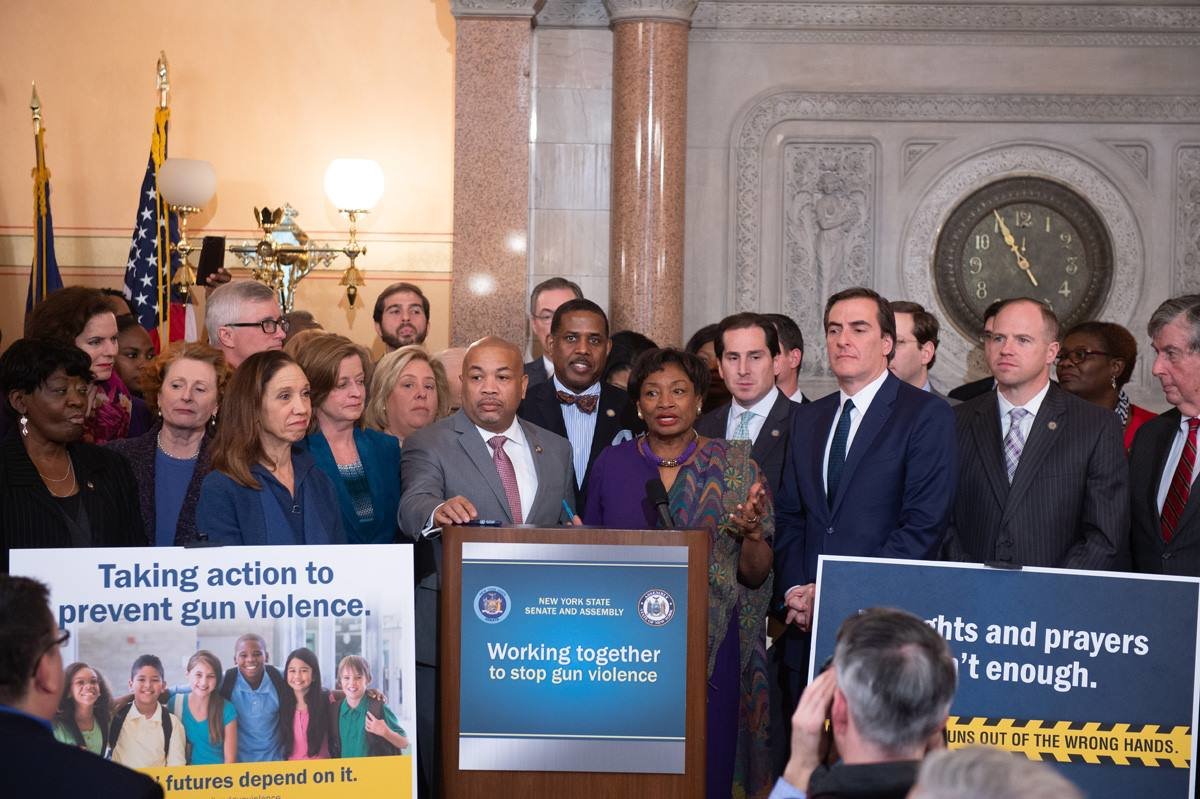 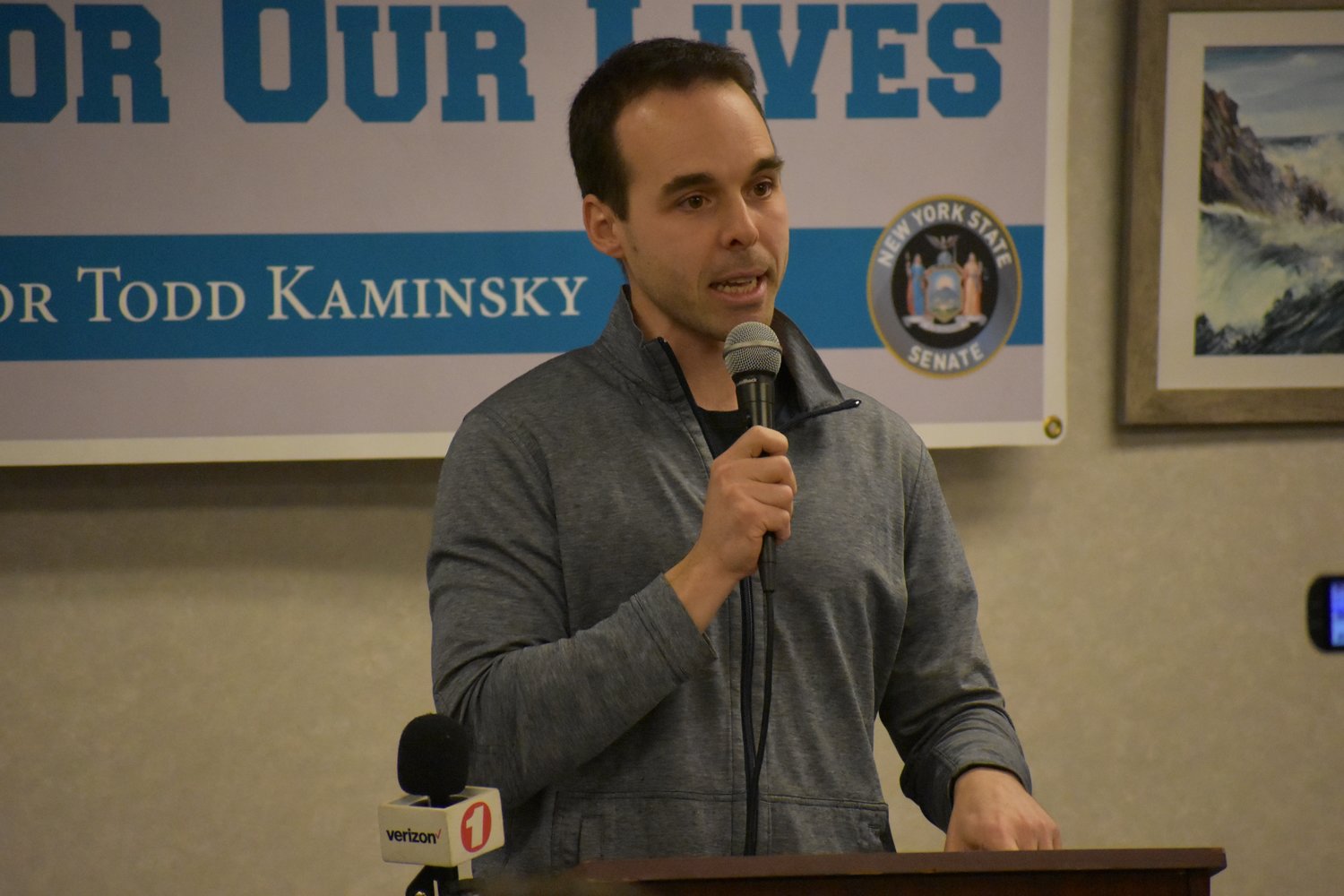 Robert Gaafar, who survived the Route 91 Harvest festival shooting in Las Vegas in 2017, lauded state lawmakers for passing the latest gun-control bills. He is pictured above at a gun-safety forum last year.
Ben Strack/Herald
What’s new in N.Y. gun laws?

Bump stocks — devices that modify semiautomatic rifles to fire continuously with a single trigger pull — are now banned. The devices, which were used by the shooter in the October 2017 Las Vegas massacre, will also be banned federally as of March 26.

Gun dealers must wait 30 days after initiating a national criminal background check to hand over a gun to a buyer. Previously, if no response came back within three days, the gun had to be sold.

Schools are prohibited from authorizing part-time teachers, or anyone other than law enforcement or school resource officers, from being armed on the premises.

The “red flag law” can force people deemed to be unstable to give up their guns and prevent them from buying them. Teachers and school administrators can file for the orders, under which the guns in the home of a student deemed a risk would have to be surrendered.

Authorities will now be able to check the mental health records of anyone seeking a gun license in New York who lives in another state.

By Erik Hawkins and Ben Strack

The new laws, which passed mostly along party lines, target guns in the classroom, people or students who have guns in the home and may be mentally unstable, bump stocks and background checks (see box).

Many of the bills had long been goals of Democrats, but had been blocked from a vote by the Republican majority in the Senate. After winning control of both houses in November, Democrats were eager to get the bills to the desk of Gov. Andrew Cuomo, who is expected to sign them.

Sen. John Brooks, a Seaford Democrat, had pushed to prohibit school districts from arming teachers and a “red flag law” to keep guns out of the hands of students who might be unstable. After Republicans voted down several Democratic measures last spring, Brooks told the Herald that the Republicans’ gun-related bills were toothless. “We have to have smart gun control,” he said.

After the new laws easily passed both houses, Brooks said, “These laws we pass today help to protect our basic freedoms — freedom from fear and freedom from violence.”

Sen. Todd Kaminsky, a Long Beach Democrat, introduced the bill to keep school districts from arming teachers. State Education Commissioner MaryEllen Elia issued a memorandum last September banning public schools from using federal money for that purpose as well, after media reports that U.S. Secretary of Education Betsy DeVos was weighing the benefits. DeVos later said that she had not intended to act.

“The gun-safety legislation we passed today is a comprehensive set of common-sense bills designed to get dangerous weapons out of the hands of dangerous people,” Kaminsky said, “while ensuring that we do not enact misguided and reckless proposals like arming classroom teachers.”

When Kaminsky introduced it in March 2018, Rockville Centre Schools Superintendent William Johnson appeared with Kaminsky to urge its passage. “Anything we can do to keep guns out of schools is a step in the direction of maintaining safety for all of our students,” Johnson said.

State Assemblywoman Judy Griffin, a Democrat from Rockville Centre, sponsored the legislation that passed in the Assembly, which ensures that only qualified school resource officers, law enforcement and security guards are legally allowed to carry guns on school grounds. “Far too many lives have been lost to gun violence, yet inaction has allowed the tragedies to continue,” Griffin said, adding that “students should be focused on studying, not school shooter drills.”

Robert Gaafar, of Rockville Centre, a survivor of the shooting at the Route 91 Harvest Festival in Las Vegas in October 2017, which left 58 dead and more than 800 others injured, said he was pleased to see the State Legislature act to decrease gun violence.

Gaafar lauded the legislation’s red flag law, which he called “a great step for safety,” and its ban on bump stocks, which were used by the gunman at the concert. He added that he agreed with prohibiting teachers from having firearms in school, noting that he supports alternative security measures in schools, such as double-lock doors, and more cameras and security guards.

“It’s baby steps,” he said of the bill. “It’s got to happen at the state level first.”

Gaafar, 35, was at the Route 91 Harvest Festival testing prototypes of his company’s beer-vending machines when bullets started raining down on concert-goers from the 32nd floor of the Mandalay Bay Hotel. He managed to temporarily find shelter and ultimately escape.

He joined the Everytown Survivor Network, a program of Everytown For Gun Safety, a nonprofit organization that advocates for gun control, and has also worked with the Nassau County chapter of Moms Demand Action For Gun Sense in America. He noted that the group made a strong push before Election Day to ensure Democrats took the majority in the State Assembly and Senate to pass these bills.

Now, Gaafar said, he is focused on advocating for universal background checks at the federal level, closing what is sometimes called the private sale loophole.

Tom King, president of the New York Rifle and Pistol Association and an NRA member, said in a statement published in the New York Daily News that the new restrictions would not make people safer, and that they represent an overreach of power by Democrats.

“This is exactly what we feared” when the Democrats won control of the Senate last November, King said. “This is a case of the Democrats coming in, running wild, writing bills on everything they can think of, and then trying to pass as much of it as they can.”

After the Senate’s Jan. 29 vote, King wrote on Facebook, while sitting outside the Senate chamber, that conservatives should reflect on their recent electoral losses. “The results of those failures are coming to fruition right now, as the now Democratic-controlled Senate passes anti-gun bill after anti-gun bill by a 40-23 margin,” he wrote. “It’s sad we could have prevented this by simply exercising our right to vote.”

NRA representatives wrote on the organization’s website that the new package of laws was “nothing more than a resounding indictment of the SAFE Act’s complete failure.”

“Over half a decade later, there is zero evidence the SAFE Act has done anything more than punish law-abiding gun owners,” the website stated. “During Cuomo’s tenure, nearly a million New Yorkers have left the state . . . What has become abundantly clear is that this is nothing more than political pandering to his extreme anti-gun base.”

Last year, the Herald published a 10-part investigative series, “Safety and the 2nd,” exploring the gun control debate from several angles, including the perspectives of those who opposed the SAFE Act and further gun laws.

At a protest in Albany in April, gun proponents said that passing more restrictive gun laws has not worked since the first national legislation in 1934. The laws usually end up hurting people who own guns legally and are not violent, they said.

“The majority of law-abiding citizens should not be punished en masse for the actions of the mentally imbalanced,” said Christopher Pajarillo, an Army veteran who served in Honduras and Panama and fought in 1991 in Operation Desert Storm in Iraq, otherwise known as the first gulf war. “The people against gun control were not invited to the conversations . . . If the common-sense gun laws that have been in place since 1934 aren’t working, they might want to think about getting rid of them and talking to us about what we would want.”

“Enforcing common-sense safety measures for gun ownership in no way infringes on the Second Amendment,” he said. “Rather, it protects the rights of the general public from the horrors of unchecked gun violence.”