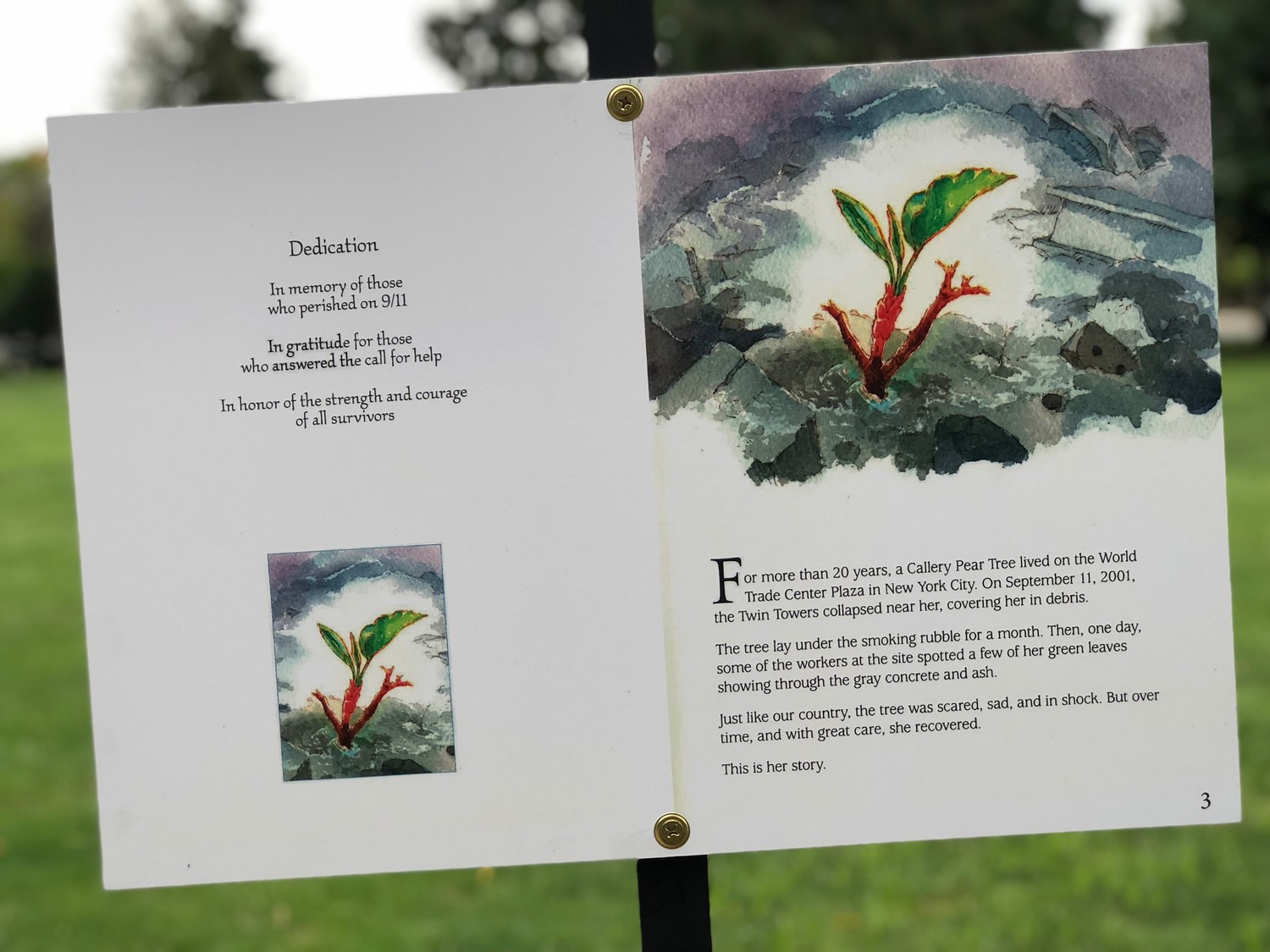 The story of the tree that survived the collapse of the World Trade Center on Sept. 11, 2001, is posted around the Village Green.
Courtesy Ellen White 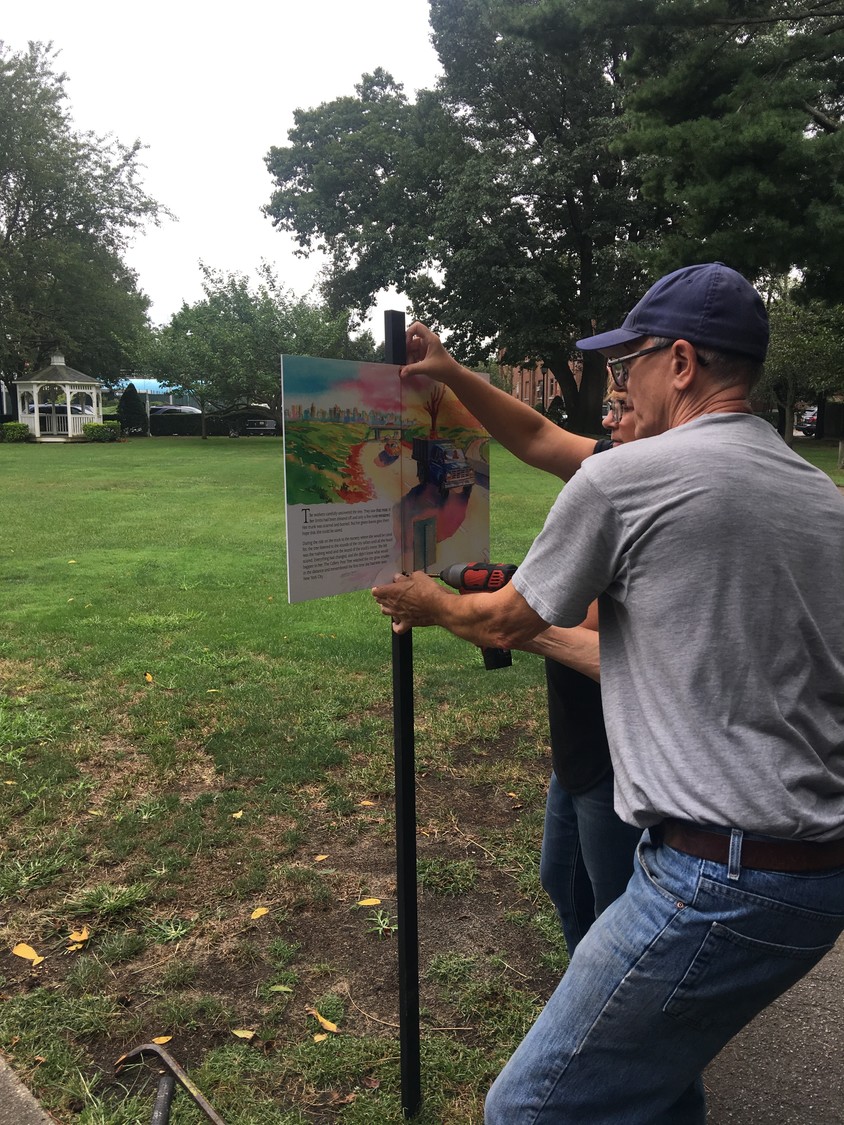 Ellen White and Paul Karasz installed one of the boards along the Story Walk.
Courtesy Mary Beth Croutier 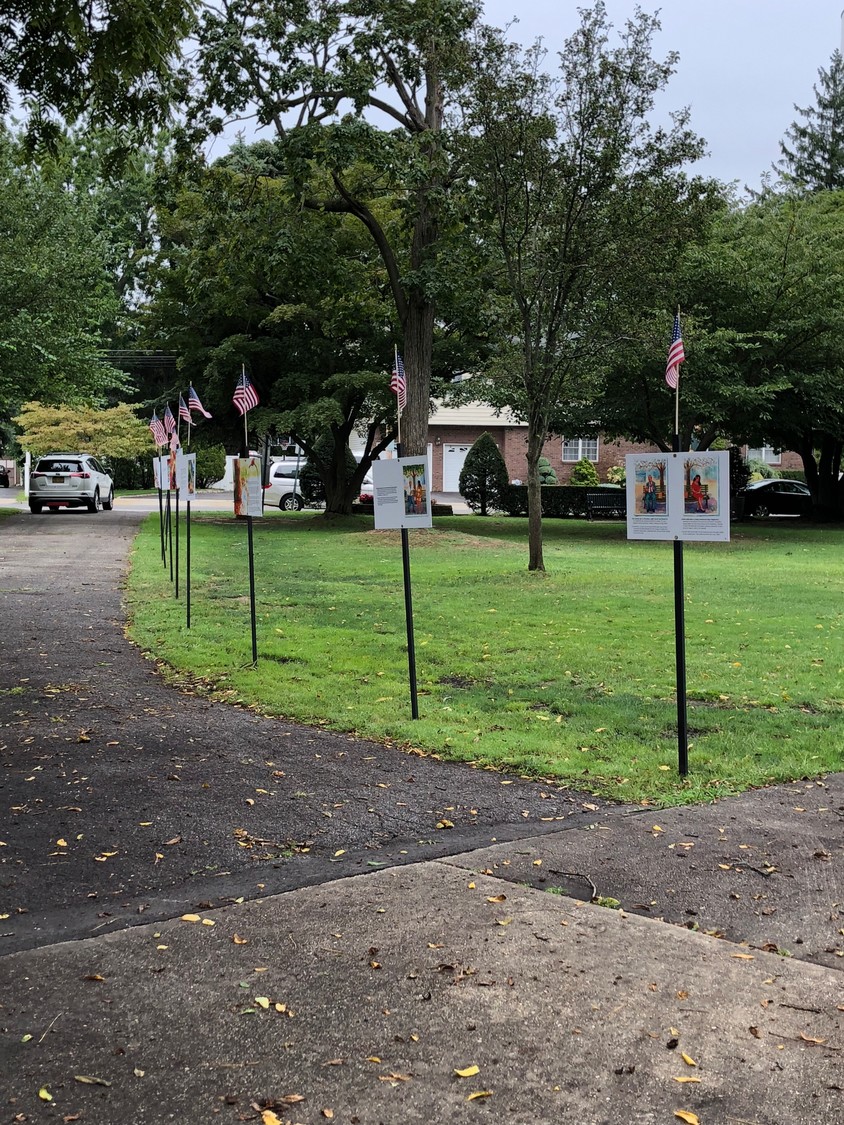 Boards sharing the story of the “Survivor Tree” will be up throughout September.
Courtesy Ellen White 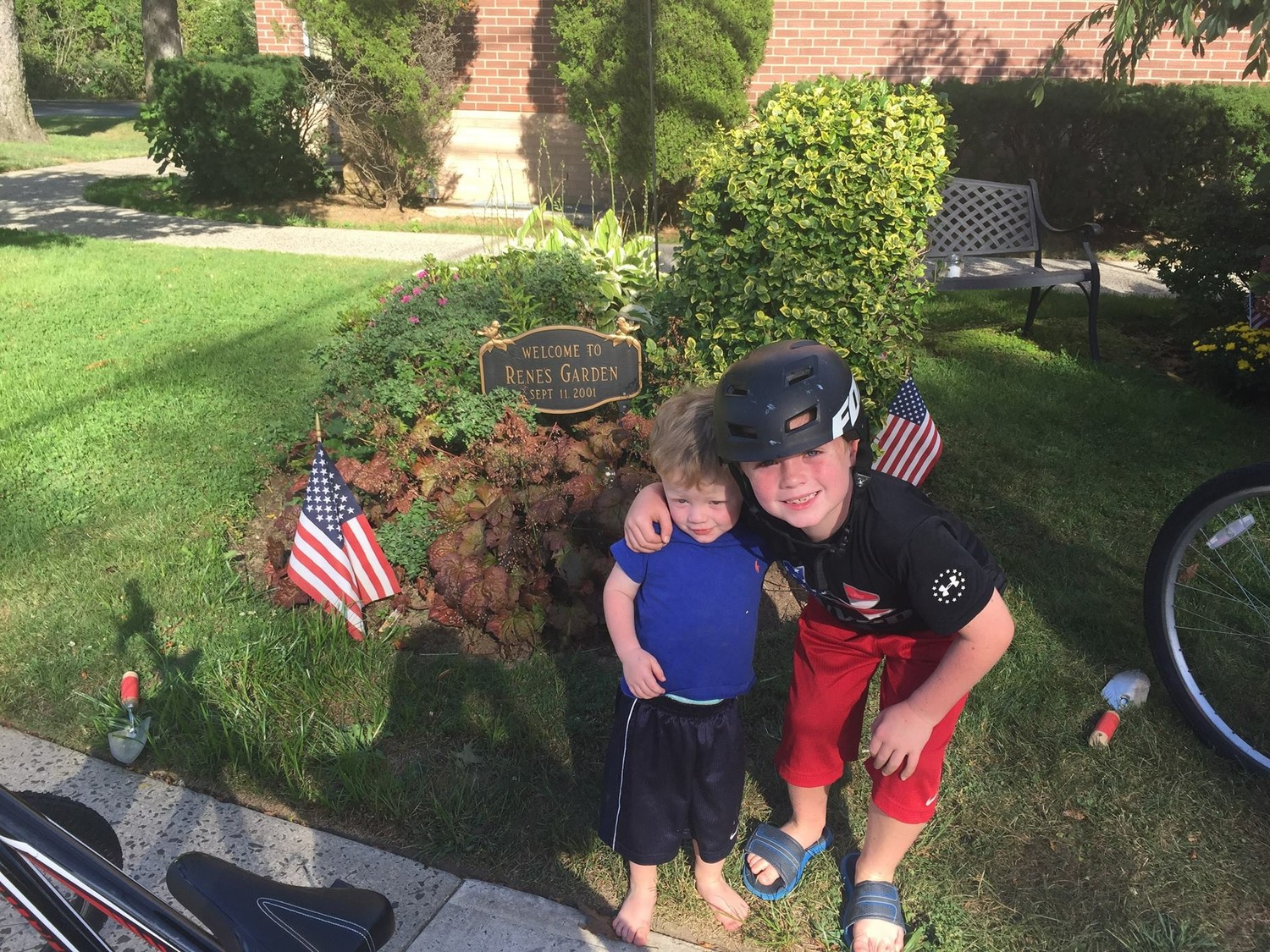 “My 7-year-old asked me why would somebody want to kill themselves to do this harm to other people?” recalled Mary Burke, a Rockville Centre resident and mother of four children.

As some adults still struggle to process what happened on Sept. 11, 2001, the task of explaining the attacks to their children is even more difficult. But with the installation of a new Story Walk on the Village Green, that conversation could become easier.

Over a dozen boards were placed around the Maple Avenue park last week, displaying the pages of “The Survivor Tree,” a 2011 book by Cheryl Somers Aubin about a Callery pear tree that was found alive amid the rubble of the collapsed towers of the World Trade Center.

The picture book, based on a true story, is told from the perspective of the tree as it recovers at a nursery before being replanted in Manhattan’s 9/11 Memorial Plaza. The idea for the book came when Aubin read a blurb about the tree’s survival and replanting in the Dec. 23, 2010, issue of USA Today.

“I closed the newspaper and I thought, ‘I think I’m supposed to tell this story,’” Aubin recalled.

Ellen White, a co-founder of Backyard Players & Friends, a local arts-based community program that caters to teens and young adults of all abilities, came up with the idea for the Story Walk after seeing the effect that a remembrance garden outside the Rockville Centre Public Library had on the community.

Rene’s Garden, named for White’s friend and neighbor, Rene Olson, who worked at the World Trade Center and died in the terrorist attacks, has been a place of reflection for young families since 2002. White and others have planted tulip bulbs there for the past 16 years as a way to remember Olson, who was a local librarian.

“Talking and connecting with those mothers . . . it was a good place for them to bring their young children to talk about that day,” White said.

Olson’s cousin Jaime Madden said she brings her four children — ages 4 to 14 — to the garden each Sept. 11 to plant tulips and talk about Rene. “What a kind, beautiful person she was,” she said.

She recalled talking with her 8-year-old last year about what happened that day, and the people who died in the attacks. “It’s a hard conversation to have with younger kids, yet you don’t want to lose the significance of that day,” Madden said. “. . . They had so many questions, but it was such a beautiful place and way to talk about it with them.”

Mary Burke’s husband, Tom, who is now retired, was a police officer in Lower Manhattan in September 2001.

“It’s always been something that we vowed never to forget,” Mary said, “but how you translate that to your children has to be gentle.”

Burke, whose oldest child is 18 and whose youngest is 7, said that planting tulips in the garden became a tradition, and that the setting serves as a learning tool and a conversation starter.

“It was just so much easier than talking about destruction and fire and death,” Burke said, “and it was more about what we could bring and how things can grow from this.”

Her 7-year-old son, Terrence, is still trying to understand what happened that day, she said, adding that, for her, explaining hatred is the hardest part. The story walk, she said, is a great addition to help children learn about Sept. 11, and added that she would take Terrence there.

“If you could show that there are things that outlast that type of fear and that type of hatred, I think that’s a lesson right there,” Burke said.

Aubin, who lives in Vienna, Va. — just west of Washington, D.C. — said that her husband was in the Pentagon on Sept. 11, and that she didn’t hear from him for an hour after a plane struck the building, killing 125 people inside. “It was the longest hour of my life,” she recalled, noting that they went to pick up their son from school.

Later, her son, who was 7 at the time, asked her, “How did the good guys get out of the planes before they crashed?”

Through writing the book a decade later, she said, she could pass along a story of hope and healing that children — and even adults — might embrace. She noted that though the first page mentions that “the Twin Towers collapsed,” the book does not focus on the attacks themselves.

Aubin said that the tree’s emotions help drive the story’s lessons home. She has sold 10,000 books, and all profits go to charity.

“It just has the feelings that we all went through after 9/11,” she said of the tree. “The shock and the anger and the sadness and wondering if anything was going to feel normal or OK again.”

The Village Green holds a piece of steel that once helped support the 48th floor of the World Trade Center’s south tower, which was unveiled by the village in 2011. In 2015, a Callery pear tree that was seeded from the original Survivor Tree was given to the Village and planted at the memorial, according to White, which is where the Story Walk begins.

“When Ellen had the idea for the book, I thought it would pay beautiful tribute to the memorial that’s here to put it here with the tree,” said Mary Beth Croutier, a member of the RVC Conservancy who helped put up the placards on Sept. 7. “We made a promise to never forget those we lost in 9/11, and so to honor that commitment, this is just one small way of explaining to young children and families and to remember those we lost.”

A Sept. 11 remembrance ceremony is scheduled for Sept. 16, at 7 p.m., at the Village Green. The Story Walk will be set up throughout September.

Aubin, who said she has never seen her book used this way, noted that she would look into doing something similar in her hometown.

“Frankly, I am blown away. It just brought tears to my eyes to see my book there,” she said. “I’m just so honored. It’s so nice that the story of this tree is going to reach more people.”

Salutatorian inspired to become a doctor by a Glen Cove physician